Populist artists often try to create works that are universal, that will have the broadest possible appeal and resonate with the largest number of people. While many creators opt to tap the Lowest Common Denominator, others go a more difficult route and attempt to make a work that can be interpreted many ways, one upon which the audience can imprint their own psyches and experiences. Some art has approached this goal, like the splattered paintings of Jackson Pollock or the meandering prose of Robert Anton Wilson. I think no work has achieved the result of being all things to all people better than my favorite movie…The Human Tornado.

Starring bawdy comedian Rudy Ray Moore, The Human Tornado is an incredible film that simultaneously straddles multiple genres — at once an action and a romance, a comedy and a gripping drama, an art film and a commercial endeavor. There’s truly something for everyone here: 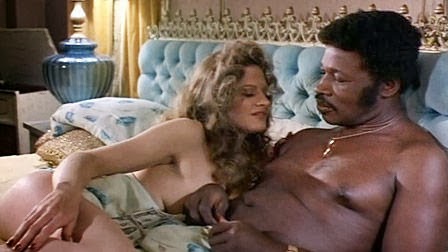 ✓And an amazing soundtrack that stands alone as listenable experience.

✓How about chases? The Human Tornado’s got that too. 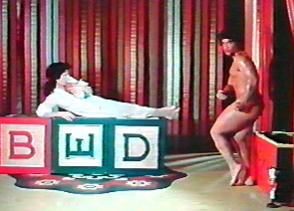 ✓And finally, if you want to see a guy with nunchucks in The Human Tornado? You know what—you got it. And Moore put him in a leopard-print Speedo as a bonus. Just for you.

Most would file this movie away under “Blaxploitation,” owing to its cast and themes, as well as the time period in which it was produced. And to be sure, The Human Tornado would not have existed without the interest of big studios and film distributors in 1970s American black culture—and, specific to this effort, the money generated by Rudy Ray Moore’s first feature, Dolemite (indeed, The Human Tornado is a sequel, though the two films share only the titular character’s name and penchant for rhyming.) Yet viewed outside of that contextual lens that brought us classics like Superfly and Black Caesar, The Human Tornado takes on the form of other genres like the pro-gangster theater fare of the 1930s and ’40s — of a hard-boiled crime serials that would influence programming like HBO’s True Detective — of the wacky kung-fu antics evinced by Jackie Chan and Jet Li. To be sure, The Human Tornado isn’t quite as good as any of this other material, but it draws from these sources to create a unique pastiche that it as once comfortingly familiar and horrifyingly psychedelic.

I decided to introduce myself to readers of actionagogo.com by revealing my favorite movie of all time—without reservation or any sly nods and winks, I love The Human Tornado, and I have seen it well over a dozen times, of various edits and formats, for both entertainment and instructional purposes (the instruction being, “This is what an insane movie looks like.”).

If you enjoy crude outsider art and do-it-yourself efforts that are difficult to define in any known category, then you will probably enjoy The Human Tornado. And if you don’t enjoy it…you’re probably racist.

Verdict: It is my favorite movie…but considering I will be writing about other movies in the future that are technically “better,” I’ll give it two stars. It will pan out better later when talking about films more visually arresting and less PCP-fueled.