Conan the Barbarian: An Epic Warrior Deserves An Epic Podcast

Everything you need to know about Conan The Barbarian in 7 hours.

Over at the Projection Booth podcast, show hosts Mike White and Rob St. Mary have truly outdone themselves with an impressive 7 hour deep dive into the world of Conan The Barbarian. Along with guest hosts Josh Hadley and El Goro, the podcasters have invited the likes of Marvel Comic’s Roy Thomas and film producer Edward R. Pressman to talk about their own experiences bringing the Cimmerian to life.

Let us tell you of the days of high adventure….
In a truly epic episode of The Projection Booth, we look at John Milius’s Conan the Barbarian. The film put Arnold Schwarzenegger on the map and kicked-off years of sword & sorcery imitators.

Along with El Goro of Talk without Rhythm and Josh Hadley of Radiodrome, we explore the fiction of Robert E. Howard, the Marvel Comics version of the Barbarian and the subsequent sequels and reboot to the 1982 film.

Clocking in at seven hours, this is not a podcast for the weak.

If you’re man enough to endure this much barbaric adventurism then, by all means, click on Giant-Size Conan #1 and go forth… 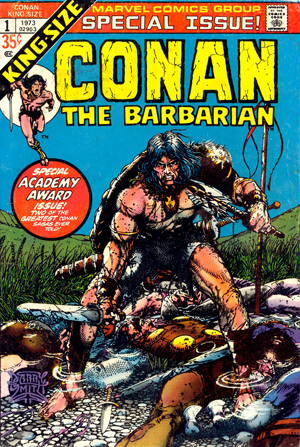 Source: Projection Booth| Action A Go Go on Twitter and Instagram | Be sure to leave your thoughts in the comments section! Troy-Jeffrey Allen writes about action/adventure for Action A Go Go. He is a comic book writer whose works include BamnComics.com, The Magic Bullet, Dr. Dremo’s Taphouse of Tall Tales, and the Harvey Award nominated District Comics. In addition, Allen has been a contributing writer for ComicBookBin.com, OfNote Magazine, and ForcesOfGeek.com. His work has been featured in the City Paper, The Baltimore Sun, Bethesda Magazine, The Examiner, and The Washington Post. Yes, he wrote this bio.