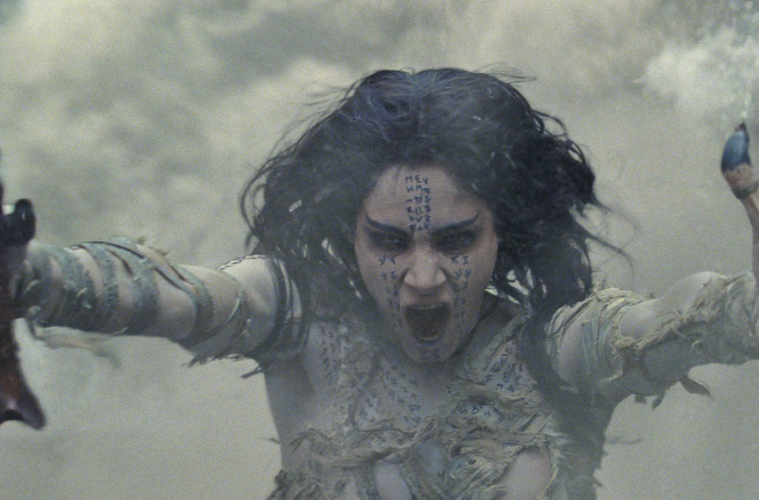 Prepare for The Mummy. 10 Mummy Movies to Watch.

Like the other Universal horror films, The Mummy (1932, originally titled Im-Ho-Tep) relied on mood and setting. There’s nothing face value terrifying about these films, but they burrow under your skin for reasons other than their fright-factor. As a kid the Mummy ignited my imagination in ways that the other movie monsters couldn’t. I’d dream of exploring ancient tombs or discovering spiritual artifacts that could resurrect the pharaohs. Meanwhile, I recoiled at the thought of dissecting a frog so no part of me wanted to deal with cadaver bits. And what kind of fresh nonsense was a man that turned into a wolf during a full moon? What about heavy cloud cover? And what would a lunar eclipse do to his disposition? For whatever reason, I’ve always found the Wolf Man a more problematic transformation than that of the Gremlins.

The Mummy had magic, mystique and romance. Within the tattered bandages and decomposing flesh lived the beating heart of a romantic. The resurrected walking corpse almost always had love on his mind – the kind of timeless love that spans multiple regenerations. He’s really just a Romeo with an unfortunate hobby of homicide. Like the other monsters, he was just a little misunderstood.

As the years wore on, the Mummy got pushed further toward the bottom of the monster hierarchy. Vampires rose to prominence, Frankenstein’s monster got thinkpieces and parodies, the Wolf Man eventually found puberty and basketball stardom, and the Mummy, outside a few outings with Hammer Horror, just gathered dust until Brendan Fraser and Stephen Sommers pop-culture resurrected him in 1999.

The Mummy may not be as prolific as the other Universal monsters, but he certainly put together a filmography worthy of closer examination. Therefore, as the apparent Action-A-Go-Go Mummy aficionado in residence, I’ll do my part. It’s time to highlight the 10 essential Mummy films to view in preparation for the latest resurrection.

A fictionalized account of Carter’s 1922 Egyptian expedition that unearthed King Tut. This particular expedition awakens Imhotep (Boris Karloff) who believes Helen to be the reincarnation of his ancient love. The methodic pace allows Karl Freund (cinematographer for Browning on Dracula) to indulge in texture and atmosphere. Consider how freely the camera moves on Freund’s set compared to Dracula, which feels like filmed theater in comparison. Structurally, The Mummy could even be considered an indirect remake of Dracula. The opening set piece stands as a one of the finest in all Universal Horror. Meticulously crafted and seamless in the ways it blends fact with fiction and past with the present. Interesting note: After a successful Hollywood career, Karl Freund would go on to become principal photographer on I Love Lucy.

This first follow up to The Mummy (1932) isn’t a continuation of the first film, but rather the beginning of a new story altogether. The Mummy’s Hand zips along, mixing comedy, romance and thrills in this story about an archaeologist and his sidekick who attempt to find the tomb of Princess Ananka only to be rebuffed by the High Priest of Karnak and his lap dog/mummy Kharis. In Karloff’s wake, Universal contract cowboy Tom Tyler stepped into the shrouds because he looked like Karloff. Blacking out the Mummy’s eyes during close-ups offers chilling witness to an undead soul. Made on the cheap by reusing select shots from The Mummy (1932), The Mummy’s Hand offers a cheerful blend of B-movie schlock and sincerity and marks the debut of the character in Universal’s second wave of horror.

Lon Chaney, Jr. became Kharis in 1942’s The Mummy’s Tomb and made his distaste for the character widely known. Encased in stiff, uncomfortable wrappings and a latex rubber mask (to which Chaney was allergic), Chaney was completely unrecognizable. Unlike earlier Mummies played by Karloff and Tyler, Chaney never spent any time in these films outside the costume. Completely encased in the crippling rags, Chaney’s Kharis attacked at such a sluggish rate that even contemporary audiences acknowledged the unintentional humor. The Mummy’s Curse stands as the third outing for Chaney and the final in the Universal Mummy series. It contains a few striking scenes of memorable cinema (most notably when Princess Ananka – played by Virgina Christine, future Folger’s coffee spokeswoman – digs herself out of a bog). The biggest knock against the film is the wayward continuity. There’s no way to logically assimilate the film into the rest of the series, which probably causes many critics to undermine its entertainment value as a standalone film.

Abbott and Costello Meet the Mummy (1955)

This refashioning of the narrative from The Mummy’s Hand concluded Abbott and Costello’s run of meeting golden age monster movies. The monster, this time named Kleris and played by Eddie Parker, looks like a Mummy, walks like Frankenstein’s monster and growls like the Wolf Man. His version of menace – arms stretched forward (like riding a motorcycle) while ambling – would become a much-parodied element of the classic Mummy monster. It’s not the best of the Abbott and Costello Meet… movies and contains an episodic narrative featuring a series of individual set pieces, but nonetheless entertains as a capable platform for the standard Bud and Abbott routines. Two years later, Abbott and Costello split as a comic duo. They made only one more film after Meet the Mummy and Lou Costello died in 1959. With this extra textual information in mind, the film feels more bittersweet than madcap.

Hammer’s successes with The Curse of Frankenstein (1957) and The Horror of Dracula (1958), encouraged a 1958 agreement whereby the family-run studio borrowed the rights from Universal to remake some of their iconic monster properties, including The Mummy. Director Terence Fisher employed Hammer stalwarts Peter Cushing and Christopher Lee as archaeologist and mummy, respectively, and filmed a relatively gore-free, true-to-source adaptation using names, emotional notes and images from the entire cycle of Universal Mummy films. The popular film would inspire three more Egyptian outings for the studio of wildly varying success. Easily the best Mummy movie since Freund’s original.

The original Aztec Mummy (1957) enters into the Mummy mythology via a psychiatrist who believes he can tap into past lives through hypnotism. That said, this movie has nothing to do with that movie, even if the film suggests they’re somehow dealing with the same Aztec Mummy character. This is a sequel to 1963’s Doctor of Doom, which concerns mad scientists and brain transplants and an ape-man named Gomar. Wrestling women take on a variety of monsters. The titular Aztec Mummy fights with the women and apparently fancies itself a vampire. This low-rent entry landed a spot on this list for the sake of novelty. On the off chance you’re drunk one night and wondering what the combination of a Mummy and a luchador might look like on film – fire this one up on YouTube.

Peter Cushing retired from the film after a day of filming to care for his terminally ill wife. The director died of a heart attack on set and Hammer executive Michael Carreras stepped in to complete the film. Above and beyond those relevant tidbits, the film’s a novelty within the Mummy oeuvre because Hammer dared to remove the Mummy from a Mummy film and replaced the ambling undead with a bevvy of cleavage and cursed artifacts. Based on the Bram Stoker novel The Jewel of the Seven Stars, Blood from the Mummy’s Tomb offers late-Hammer titillation in a story about a scantily clad ghost perpetrating evil. If you can abide some of the silliness (and its damned reputation), there’s plenty of fun and atmosphere to be had.

Spanish Euro-schlock writer/actor Paul Naschy played the dual roles made famous by Karloff in this adaptation of The Mummy legend directed by Carlos Aured. True to expectations, The Mummy’s Revenge features a few scenes of brutality including torture, throat-slashing and head-crushing. The available-English language dub features unfortunate/hilarious Mummy moaning that’s been likened to prolonged orgasms. The lovely Helga Liné (Horror Express) plays Zanufer and bares an appropriate amount of midriff. With the recent interest in Naschy’s career, it’s possible we’ll see a proper American release before too long. Filled with wooden acting and many amateurish camera angles, this is not one of Naschy’s best productions – yet The Mummy’s Revenge still proves to be an entertaining little rarity.

Stephen Sommers and Brendan Fraser tap into the Mummy series by way of the fun and frivolous adventure serials and come away with a classic monster / Indiana Jones hybrid that is both true to the spirit of the original and wildly entertaining as a late 90’s spectacle film. Fraser and Rachel Weisz form a wonderful duo while John Hannah tosses comic zingers as they flee the wrath of Imhotep (Arnold Vosloo). The Mummy (1999) spawned one worthy sequel and one total disaster. No classic monster movie deserves the indignity of football-playing yetis.

The true story of what really happened to Elvis. Oh, and yes, Elvis (Bruce Campbell) teams up with a man who believes he’s JFK (Ossie Davis) to battle an Egyptian Mummy in a rest home. On the other hand it could be about two elderly men fighting their dwindling health and sanity and refusing to go quietly into that good night. Bubba Ho-Top may not always live up to its lofty, high-concept ambitions, but there’s plenty of joy to be had watching Bruce Campbell and Ossie Davis star in a horror-comedy that embraces these actors’ ability to portray depth of character despite the eccentricity swirling around them.