THE NIGHT SHIFT: TAKING A PEAK AT OUTLAST 2

Almost 3 years after the original, the much anticipated sequel to the hit indie horror game Outlast has finally landed. Outlast 2 has you once again in the shoes of a bland but plucky protagonist as he runs around with a camera avoiding the various psychopaths that are determined to eviscerate him, this time in a secluded cult community. It’s not exactly an original idea, but then the first game concept of having you run around inside a dilapidated psychiatric hospital that’s been taken over by violent, disturbed inmates wasn’t exactly breaking new ground either. Yet Outlast is widely acknowledged to be one of the scariest horror games in recent memory, and Outlast 2 is clearly an attempt by Red Barrels studio to recreate the winning formula of the first game. Overall I’d say that their success in this is somewhat limited. 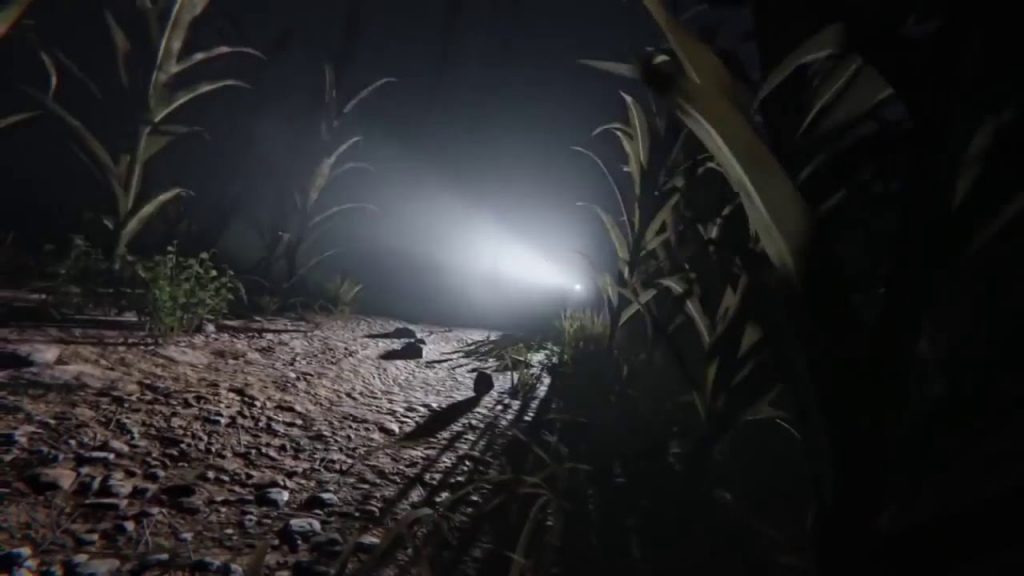 Cameraman Blake Langermann, and his journalist wife Lynn, are investigating the murder of a young, unidentified and heavily pregnant woman. Their search leads them, via crashed helicopter, to a secluded area of the Supai region that is populated by an insane, Antichrist obsessed cult, lead by “Papa” Sullivan Knoth. Lynn is immediately taken, and Blake must explore the town and avoid the insane inhabitants in order to get her back.

As with Miles in the first game, Blake is completely unable to fight, instead relying on stealth, running and hiding in order to survive. This is the first problem I have with the game. In Outlast it made sense that access to anything that could potentially be made into a weapon would be limited in a psychiatric hospital, and any weapons or weapon-like objects were in the hands of the deranged and supernaturally strong inmates. However Blake is in a town, there are plenty of weapons available to him. From shovels to blades to a humble piece of wood the means for Blake to defend himself are everywhere he looks. Yet he chooses to run and hide, rather than fight or even defend himself. From a story standpoint this makes little sense, and certainly left me wondering how exactly Blake intended to rescue his wife once he had located her. 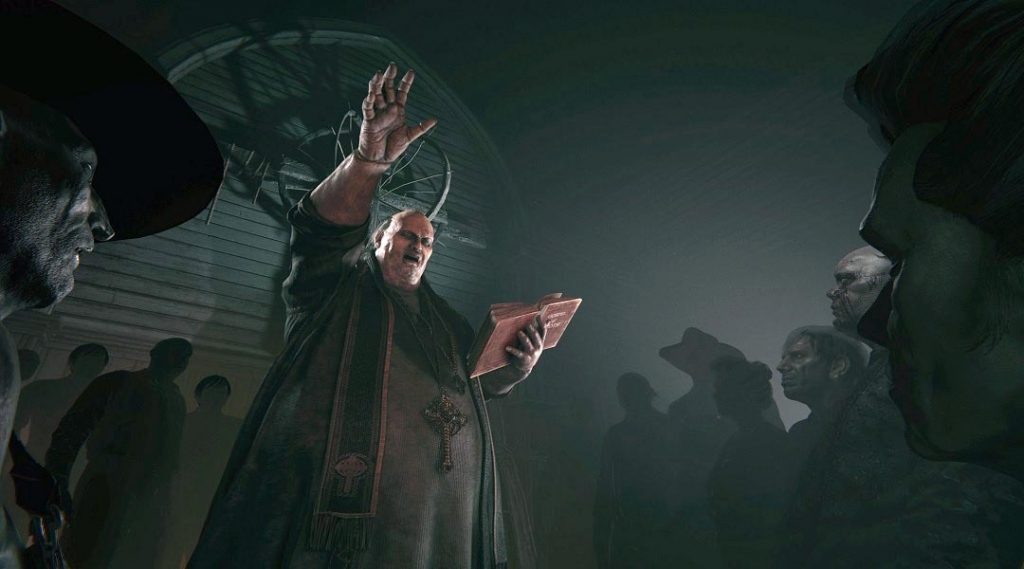 Mechanically the lack of even the most basic defence (aside from the occasional QTE) combined with the focus on running and hiding while trying to find the next hole or crawlspace soon becomes a little stale. While the constant feeling of being hunted creates a decent level of tension, one chase sequence is pretty much the same as the next. The tension is well maintained, but that’s all it is, maintenance, there’s no escalation in panic or skill required as the game progresses. To make matters worse the strategy combined with stealth while avoiding inmates in the first game has been replaced by sheer trial and error dumb luck, running and dying until you find the right gap to escape. While it can be argued that the run/hide stealth is sort of the whole point, once you’ve taken a pickaxe to the balls a few times the lack of even the most basic defensive combat will get pretty irritating

The thing Blake makes the most use of in his quest to find his wife and avoid a grisly death is his camera, which comes equipped with night vision, zoom, and an audio detection system that can detect distant voices or footsteps. The camera also has an inventory system displaying battery level and the amount of taped footage, useful later as you will need to examine your previous recordings. You will also need to search for batteries, and like any good survival horror the batteries are scarce enough to make you worry that you will run out, but not rare enough to be too unforgiving.

While the camera and the night vision give the same nightmarish aesthetic as the first game, the amount of usage the camera gets throughout the game is somewhat baffling. Though the corn field and wooded areas are pretty dark, except when moonlit, most of the town itself and interiors are reasonably well lit. The developers’ desire to recreate the look of the first game has the unfortunate side effect of making Blake seem like he has a crazed and almost pathological need to film everything, even when a scabby looking hillbilly is right in his face enthusiastically trying to rip his guts out. 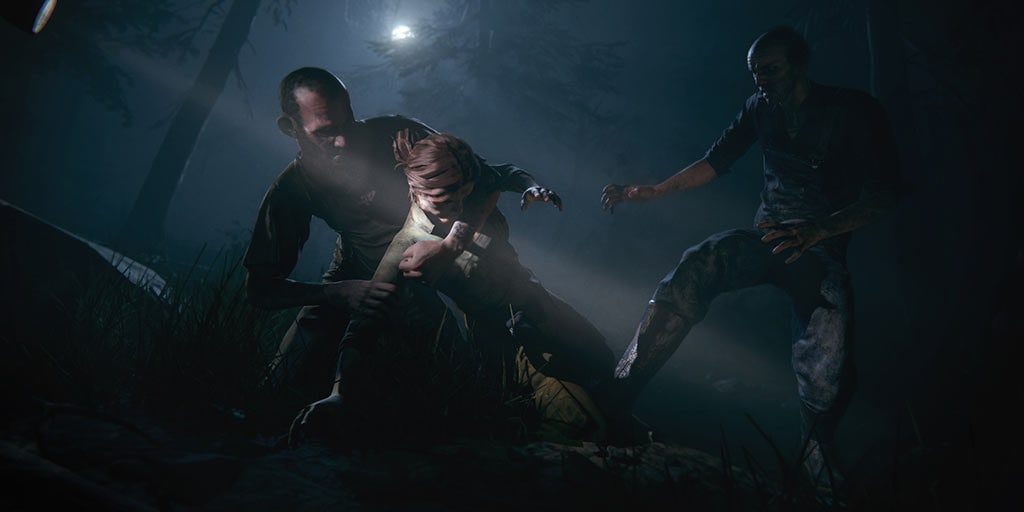 The villains of Outlast 2 are fairly bog-standard in terms of horror fare. Main enemies consist of dirty and crazed hicks with a fetish for gore, quoting scripture in a Southern drawl while chasing you down and trying to hack you to bits. The cult in question are extremely misogynist and the game contains a number of references to rape and sexual assault, something that left some critics and fans distinctly uncomfortable. The misogyny itself doesn’t concern me, bad guys are gonna bad guy and a story containing a depiction of misogyny does not make the story itself misogynist. The problem I have is that very little of this is directed at you, the protagonist. In the first game it was pretty obvious that many of the hospital inmates didn’t just want to kill you. One of the core concepts of Outlast is that that are worse things to fear than death, particularly since in a video game your character being killed is the most basic form of fail state. A  large amount of the fear and tension in Outlast, and the DLC Outlast Whistleblower, comes from knowing what could potentially be done to your protagonist if caught. However in Outlast 2 the only thing your character has to fear from the main villains is death, which to you as the player just means failing, frustration, and either trying again or giving up. With the other inhabitants, The Heretics, it’s a different story. However they barely show up until much later in the game, and only once are they the ones explicitly chasing you down.

The focus of the cult’s fanaticism and debauchery is very much on the female NPCs, none of which you spend enough time with to really care about that much. Perhaps the idea here is that the danger to others is more terrifying than danger to oneself. However the game, while giving us a reason for Blake to care since it is his wife that has been taken, doesn’t give us as players any real reason to be invested in her fate. Blake’s wife, Lynn, only gets a few minutes in the intro which serves more as a way to impart exposition then develop any meaningful emotional investment for you, the player.

To be honest even Blake seems to have a limited interest in the fate of those around him, and at times his inability/unwillingness to do anything does not reflect well on him. In one segment Blake come across a rape and torture victim, and you as the player can only film her in night vision as Blake casually remarks “This is where the magic happens” referring to her multiple rape, inevitable pregnancy, and even more inevitable death. As a player you’re at the mechanical mercy of Blake’s inactivity, unable to even check if the woman is still alive. There are potential reasons revealed within the story why Blake’s actions, or lack thereof, are not exactly the stuff heroes are made of, but the lack of response to brutality against another beyond filming and narrating for the audience honestly makes Blake seem like kind of a douche. 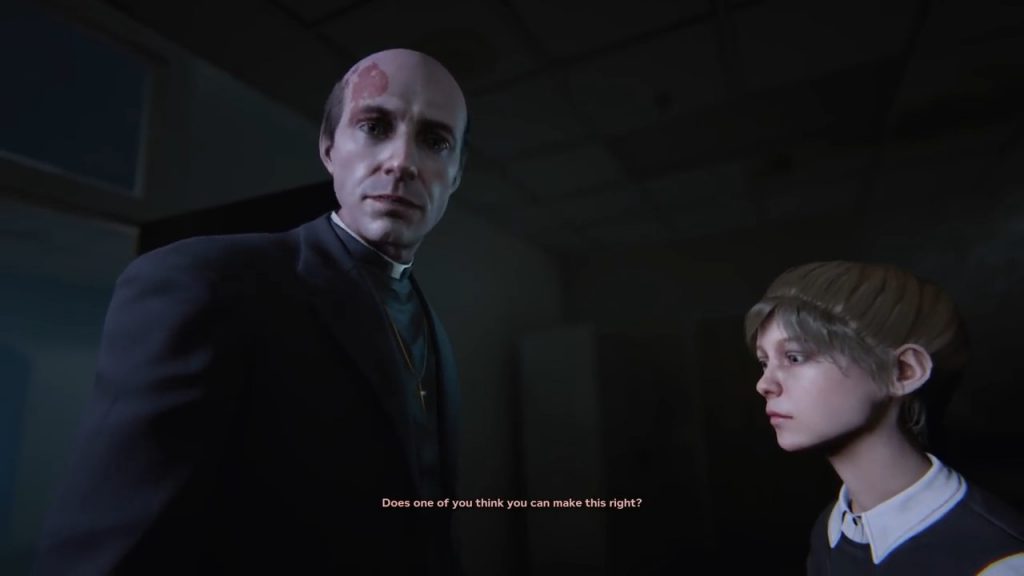 The one person that Blake does seem to care about, and who you as the player will inevitably emotionally invest in since she gets the most storyline and screentime, is his childhood friend Jessica. The fate of Jessica is covered in several flashbacks which occur throughout the game. These are awkwardly placed and slow at first, which unfortunately pulls a drag chute and repeatedly kills the tension in the first half of the game. However the flashbacks get longer and more alarming as the game progresses, becoming more terrifying than the main game and ending with the player satisfyingly tense and disoriented when returned to the present. Not to reveal too much but the focus on Jessica really demonstrates the greatest irony of Blake, that he acts and cares little when people around him need help, while the one person he does care enough about to aid is well beyond his assistance.

So how does Outlast 2 fare overall? Well…it’s ok. There are a couple of decent jump scares, and hearing Marta’s voice through the audio detection system as she searches for your hiding place is certainly likely to make you nervous. However the game never produces the levels of abject terror of the first game, instead lodging itself firmly and comfortably in the evocation of disgust and discomfort. This may have worked just fine for a basic indie survival horror game that didn’t have the Outlast name attached to it, but as it is if you’re a fan of the original game, or of survival horror in general, I think you are likely to be a touch underwhelmed. 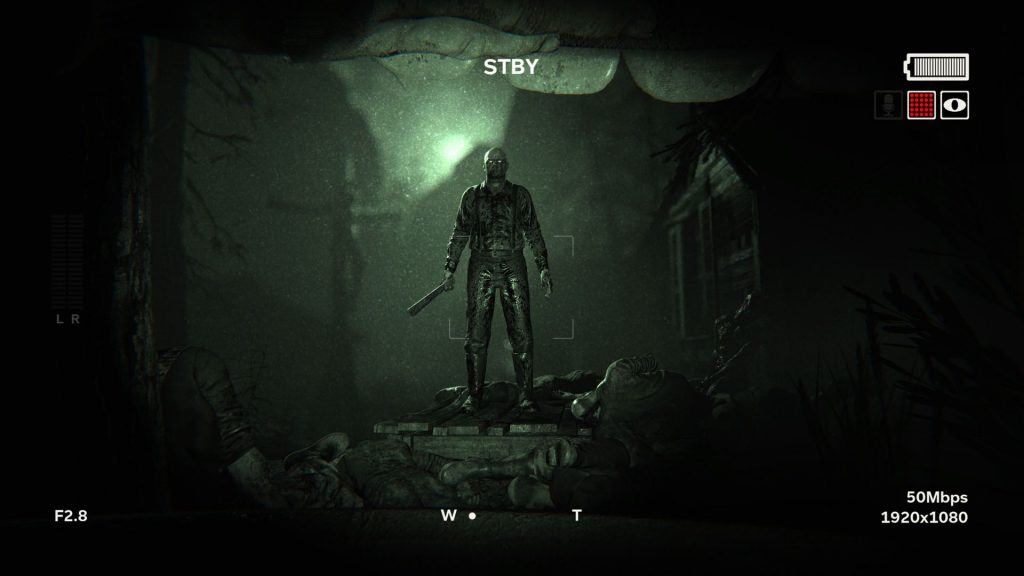 Mechanically the game functions ok, though some of the choices regarding gameplay do not mesh well with the story. I can’t help thinking that it might have served the story better if the protagonist had been female. This is for several reasons, a woman protagonist pitted against multiple stronger male opponents would better explain a choice to run and hide rather than stand and fight, and would also offer opportunities to combine the elements of the endangered loved one with the terror for the self about fears other than death. Like it’s most comparable recent title, Resident Evil 7, it’s very clear what the influences for Outlast 2 are and what it is trying to achieve, however to me the lack of emotional investment and personal stakes beyond ‘They took your woman, retrieve her. By the way GORE!!’ makes Outlast 2 seem a bit old fashioned and dated. Outlast 2 shares a problem with Resident Evil 7 in that everything that they homage made use of these ideas better than they did. Both are enjoyable, but sit firmly in the shadows of predecessors such as Resident Evil 4, Silent Hill, and The Evil Within. When it comes to the scares Resident Evil 7 has Outlast 2 beat, but on the other hand? Outlast 2 is almost half the price.