Out of all the promos for pilots I saw over the summer, I’ll admit that the trailer for Sleepy Hollow had me entirely prepared to hate it. It looked hokey, it looked derivative and it looked cheap, and in certain ways it was all those things. What I wasn’t entirely anticipating was how enjoyable it was going to be.

Now, make no mistake, “Sleepy Hollow” is not must-watch television. There is no singular element I can point to (aside from some cool design and well-directed action sequences) that is anything notably impressive. BUT, each of the elements in the show, or this pilot episode at least, work just well enough on their own to work together as a cohesive whole.
Sleepy Hollow is loosely (very, very, very loosely) based on the short story “The Legend of Sleepy Hollow” by Washington Irving. The only real similarities to the source material being that there’s a guy named Ichabod Crane and there’s a headless baddie riding around on a horse decapitating everybody. Aside from those general elements of plot, Sleepy Hollow operates as something of a poor-man’s Fringe. It sets up an episodic cop drama where the cops in question fight the supernatural as an increasingly convoluted mythology begins to unravel around them. It helps that the entire affair is carried out in a manner more or less tongue-in-cheek, as it’s basically impossible to take anything in it seriously.
The episode opens with a brief sequence taking place in the titular town of Sleepy Hollow during the Revolutionary War, where Ichabod Crane (portrayed by British actor Tom Mison), liberally reimagined as a Colonial soldier, is seen fighting a bald, masked man in the midst of a large woodland battle. Crane is wounded by his assailant but manages to chop off his head before losing consciousness. Crane wakes up to find himself buried in a hole in the ground, somehow transported to a modern day Sleepy Hollow. From there he finds himself captured by the police where predictable “man-out-of-time” shenanigans ensue. It should be noted that the first half of the pilot, while well directed, is a bit of a drag to sit through. It steals elements from both The Avengers and Tangled in a very unflattering way, exposing just how tired the time-travel-culture-shock tropes actually are. After quite a bit of cop-banter and exposition, Ichabod ends up in an “unlikely” partnership with a young policewoman named Abbie Mills (played by Nicole Beharie), who begins to believe there may be something more to Ichabod’s tale than anybody else gives him credit for. Meanwhile, his beheaded attacker, also reawoken, is charging about town chopping various people’s heads off for his own nefarious reasons. 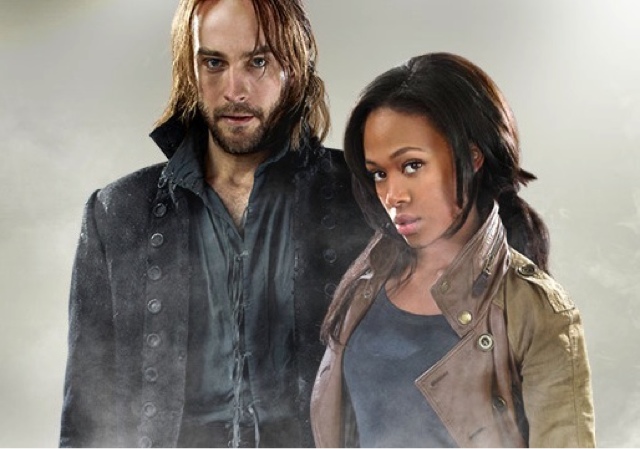 If there was any singular thing that I could point to in this episode that bothered me most, it would how much attention was drawn to the “man-out-of-time” culture shock schtick while the writers managed to weasel their way out of addressing any of the really hard issues this would present. Ichabod Crane, though a white, British male from the 1700’s somehow manages to have conveniently been on the politically correct side of history in every situation. He was British? Well he defected and joined the Americans in the fight against tyranny! He was alive in a time when slavery was a widely accepted practice? No worries! Not only does Mr. Crane oppose slavery, but he’s totally an abolitionist! How dramatically convenient! I would’ve been happier had they just glossed over all these evident problems, but instead they address them head on and the explanations are frustrating eye-rollers. But these are minor complaints given that the show is actually about a demonic, headless, serial-killing equestrian enthusiast. So what could’ve been deeply frustrating is reduced to mildly annoying.
As I previously mentioned, this show, of course, has a deeply mystical mythology all of it’s own. I would try and explain all the twists and turns woven throughout the narrative but there’s simply too much of it to really summarize. What I can say is that, for the most part, it works. There’s just enough explanation to get the show rolling and just enough mystery to keep it’s viewership coming back for a second dose next week. In particular, a subplot involving an only glimpsed demon-like figure is a highlight of the episode. It mixes mystery with enough genuine creepiness to make the character and his as-of-yet unexplained nature all the more compelling. It also helps that the director Len Wiseman has a solid grasp on how to direct horror efficiently. The final scene featuring the demon leaves a particularly strong impression as it elevates the fear factor, verging on being legitimately unsettling, all the while heightening the character’s mystique. Unfortunately, not all of the mythology works; the plot device used to bring Ichabod into the present is painfully convoluted bulls*** that’s simply too lazy to work even with the tongue-in-cheek atmosphere.
The cast is something of a pleasant surprise. Nicole Beharie and Tom Mison have workable chemistry, despite relatively uninspired characterization. Mison in particular manages to channel enough Benedict Cumberbatch-like charisma to make his material enjoyable, even in the draggy first half. Although I’m unsure whether to credit this to the actor or the direction, the Headless Horseman is a surprisingly intimidating villain for a TV show. The badassery of the design work on the character, mixed with cinematic-grade direction gives the character some legitimate gravitas, and the fun factor shoots way up every time he’s on the scene. The rest of the cast is a bit of a question mark, given that it’s unclear who exactly the regulars are. I wouldn’t be surprised if we see a few post-pilot additions enter the fray next week.
Sleepy Hollow works as light-hearted, if not somewhat forgettable popcorn entertainment, elevated above the rest of the network dramas by a few abnormally stellar technical elements. It manages to balance the inherent hokeyness of it’s own premise in a way that makes the dramatic scenes interesting enough to be engaging while still embracing the brainless fun the set-up lends itself to. This is reimagined fantasy television that works well enough to be commendable, and it serves as a suitable alternative to the unwatchable train wreck that is “Once Upon A Time”.
One can only hope everything doesn’t fall apart in episode two.
Grade: B- (would’ve been a solid B had the first half not been quite so boring)