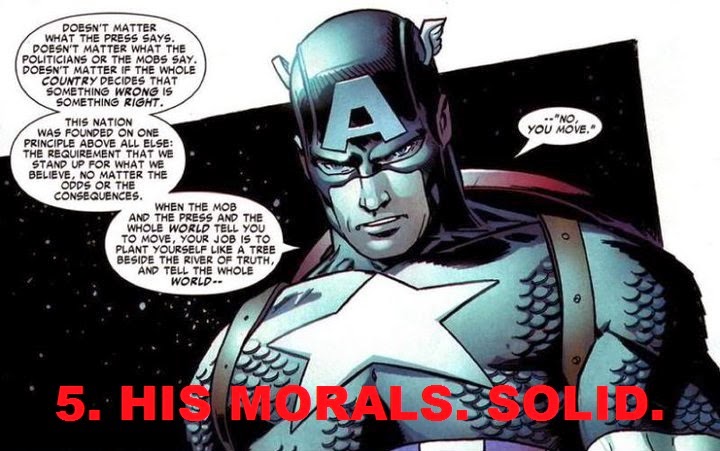 Hey guys!
In preparation for the bad ass return of Captain America to the silver screen today,  I’m more than excited to open up this playful dialogue with my good friend and all-around comic and pop culture junkie Troy-Jeffrey Allen, who actually has some great things cooking with his own comic, BAMN .

It is actually his really good (and I mean really good if you’re interested in getting into comics and are going to go see the new Captain America movie) post he wrote recently that this particular post is responding to.

Without further ado, you should probably go read it if you haven’t here: TROY LOVES ULTIMATE CAP.

Done? Good. Now let’s just state that playful dialogues about comics are always great because it promotes thinking and imagination and appreciation for writing and artwork and respect for the medium. So, if you’re going to comment with futile attempts to piss either one of us off, just know the auto response will be “go f@ck yourself”

Captain America is the poster child for sacrifice. The only other superhero that can even enter the conversation about sacrifice is Spider-Man (strong honorable mention to Daredevil, though). Whether Cap’s taking a teammate or, as the first movie portrayed, jumping on the grenade when everyone else took cover, this guy always places himself directly in harm’s way to protect others.

When he was “assassinated” in 2007 following Civil War, he deliberately took a sniper’s bullet to the neck to prevent the U.S. Marshall escorting him to court from getting fired upon. Point is, this guy always has the safety of others in mind.  I don’t care what you say, that’s bad ass.

WHEN: Seriously. Too many times. (Pictured-  Amazing Spider-Man #537)
Sure, we can applaud Ultimate Cap for taking Hank Pym outside for a little street justice over beating Janet Van Dyne. But we have to also remember two things:
1. Hank Pym was certifiably bananas in both instances.
2. In the 616 universe, he lashed out and backhanded his wife ONCE. He has never forgiven himself for it, and has made numerous strides to atone for it.
In the Ultimate universe, crazy Pym was a serial abuser. So yeah, I believe Ultimate Cap responded as ALL versions of Cap would’ve. See, Captain America doesn’t fight against evil, or shoddy clones of himself hellbent on evil, he fights for a common good, against intolerance, cynicism and injustice.
There’s a reason why he’s always called to lead when gatherings of far stronger heroes band together. Even Superman had to take a back seat to Cap’s leadership once. Superman. The ultimate boy scout. Captain America’s sense of morals over the years have very rarely come into question. He’s loyal to no selfish ideas, or personal ambitions, just a dream. And when his morals are questionable…

WHEN: Seriously, stop asking me when.
It’s easy to forget that the 616 Captain is an actual battle hardened bad ass soldier of the “big war.” Especially with that deceptive image he’s been parading about since his creation.
See everyone knows Cap was fighting in the war, sure, but more importantly he was fighting for war bonds — similar to how the marines on Iwo Jima were paraded around the U.S. in reality. Everyone knows about how he knocked out cartoon Hitler. What many don’t know though, is that the Captain not only trained dozens of soldiers and marines for black ops, but he personally carried out several missions with various elite American ally forces including a pre-X-Men Wolverine.
And if you think that isn’t crazy, he even escorted around Bucky, a child soldier and an expert in wet work. Even though he expressed his discontent with a child doing the actual wet work, he went along with it nevertheless.
Even after his cryogenic stasis, he went back to doing what he does best. Teaching the dark arts of soldiering and combat. Don’t believe me? Ask spec ops Marine black operative, Frank Castle.

…and we all know how that eventually turned out, right?

Maybe this also applies to the Ultimate Cap, but I never seem to pick up on it. Sure I get both are brilliant strategists in their own fashions, but the 616 has a knack for taking down gigantic threats with simple solutions, MacGyver-style.
Take for example the major fight from Civil War, Iron Man was feeling pretty sure of himself since the last time they squared up (Stark previously) over-powered him. The second time, Cap simply had Vision shut Iron Man down. For all Tony Stark’s ego-maniacal genius he simply didn’t forsee the most basic threat.
Who’s the genius now?
2. HE’S GOT BALLS THE SIZE OF GRAPEFRUITS

Captain America does NOT compromise. He does not falter. He will stand up to unwinnable odds…alone. He did it with Onslaught. He did it with Galactus…and he did it to the omnipotent Thanos.
In Infinity Gauntlet, when everyone else fell right before his eyes, he simply walked up to Thanos and told him he hadn’t won yet. Jeez.
And finally…

1. HE’S WEAPON I
He was the first successful result of the shady and infamous Weapon Plus program, a program that eventually spit out folks like Cyber (Weapon VII), the overly used Wolverine (Weapon X), Fantomex (Weapon XIII), Deadpool, and the super shady Tuskegee Project-like Black Captain America, Isaiah Bradley. Cap has demonstrated his supremacy over the most popular of the weapons — Wolverine — numerous times. The most hilarious of those run-ins has to be when Cap crushed the tendons in Wolvies’s forearms to prevent him from popping his claws…with his bare hands.
Now, I’m not saying Ultimate Cap sucks, or that he will lose in a fight with his 616 counterpart. I’m just saying the history of the 616 Steve Rogers is makes him a better character, in my opinion. The Ultimate Cap is pretty bad ass, but he comes across as bad ass in the same laconic worshipping sense that turned Miller’s idea of Spartans into household names.
In conclusion, I see Ultimate Cap as Jason Statham…or Arnold…or any of the biggest names in action. Kicking ass and taking names.  I see 616 Cap as John McClane before Die Hard 4 and 5. Just an everyday guy with big guts.
Hate me.
About Tony Tescadero:
I try to be normal in a wild world. I’m failing. I’m often compared to Chandler Bing and Barney Stinson. I think I’m more like Nick Miller. Sometimes I fly F-14s backwards and blindfolded, but I don’t want to brag. I enjoy good bourbon and scotch old enough to order scotch. I like watching movies and I may even be a film snob. I draw, I paint, and sometimes I write things.
Lemon Meringue Pie makes me happy.
http://tescadero.blogspot.com/