When I think of possessing an attribute that makes one superhuman, I also like to think that it would have its advantages. If such individuals were real and utilized their powers in personal ways, many would cry foul and point out that they’re using their abilities selfishly. They’re not entirely wrong, but on the flipside, if you’ve got it, flaunt it. Marvel’s mutant characters are born with mutations that give them powers and abilities. Some mutants feel they have an obligation to utilize their powers for the good of others; others use their powers solely for personal gain; and then there are those mutant characters who have abilities or appearances that are either so passive or extreme that they have no practical use and are chock-full of clear disadvantages. Some of the powers going with these characters are mere plot devices, which doesn’t do much to take away from their lameness.

Below’s a top 10 list I compiled of what I consider the lamest, useless and dumbest mutant powers that Marvel Comics has ever come out with. FYI, this list doesn’t include these guys:

Because if people could understand any language and code (as well as the context) or instantly know how to operate any vehicle in sight, it could do wonders for diplomacy, mackin’ on foreign chicks, and lead to significantly less NASCAR deaths.

Powers: Stitch’s mutant power is mild ferrokinesis. She is able to psionically manipulate small pieces of metal with precision. It is unknown if the limits of her power are genetically-based or purely psychological.

WTF?: She may have a psychological hang-up in regards to her power’s limit, but talk about lame. What the hell can she do with her power? Knit me a sweater? SMH…

Powers: Piecemeal had the mutant power to harness various forms of energy and store them within him body. He could mentally attune his body’s cellular energy storage to any single specific energy wavelength and frequency, making him mentally linked to that energy. After customizing his system in this manner, Piecemeal was able to sense this energy over a distance. In its presence he could absorb this energy and store it for extended periods of time. Also, the more energy he absorbed, the greater and more bloated he grew in size. When absorbing the dispersed energy signature of the mutant known as Proteus, there was more energy than his body could contain, and it was manifesting itself as bloating throughout his system as he exceeded his normal limits. Piecemeal’s body was destroyed when he completely merged with Proteus.

WTF?: His mother was also a mutant who cruelly abused him during his brief adolescence. He’s pretty much an energy bank, nothing else. The main drawback to his power is that the more energy he absorbed, the greater and more bloated he grew in size. At one point, he absorbed so much of a specific energy wavelength that he looked fatter than the Blob. Actually, you know what he looked like at that stage? A White male version of Precious. Times 20. 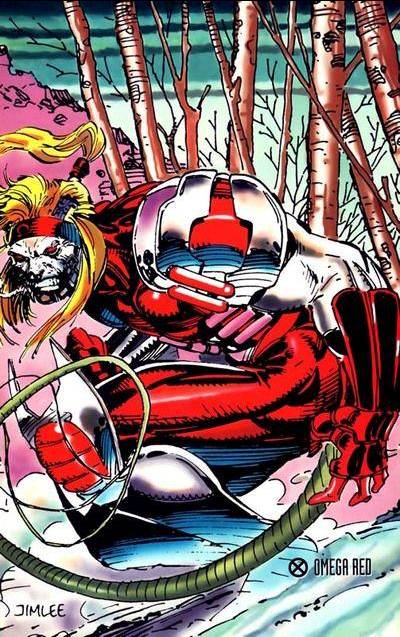 Powers: Omega Red’s mutant power enables him to generate parasitic emissions from his own body. He can use his power in two ways: He can create what he calls his “death aura”– an energy field that drains the life energy of anyone within his vicinity. Secondly, he can secrete pheromones from his body that kill people in his immediate vicinity. Omega Red can then absorb the life energy that his mutant power drains from his victims into himself to sustain his own. He must drain the life energies of others to remain active.

Omega Red has chalky-white skin and his recruitment for the Soviet Super-Soldier Program left him physically transformed, developing a surgically-enhanced musculature and augmented strength, agility, endurance, reflexes, and durability. Implanted within his arms are long coils made of Carbonadium, an alloy that resembles Adamantium but is more malleable and considerably less resistant to damage. Omega Red can cause the coils to shoot forward from openings in the undersides of his wrists in order to ensnare his victims. The coils apparently expand as they are released, since they are far longer than he is tall when fully extended. He can also use the coils as a conduit for his powers.

WTF?: Forget those fake-me-out Doc Ock tendrils that Comrade Ivan Drago has. This is his real power:  Omega Red absorbs the life energy that his mutant power drains from his victims into himself to sustain his own. Yeah, he’s gotta drain the life energies of others to remain active, otherwise he dies. Doesn’t make for a whole lotta options, does it? Except to become a psychotic Cold War-era serial killer.

Powers: Briquette was born with two mutant abilities. The first is superhuman levels of size, strength and durability. The second is that she has hyper-exothermic skin, producing tremendous levels of heat at all times, exceeding 2000˚ degrees Fahrenheit. This makes even brief contact with her something to avoid, and enables her to melt through most substances merely by touching them.

WTF?: When rappers talk about being on fire, they never compare themselves to Ricky Bobby or Briquette. She’s a big girl alright, but don’t get it twisted. She’s big…but hot. I mean that literally for both. Basically, she’s too big and too hot for anyone to hold on to. 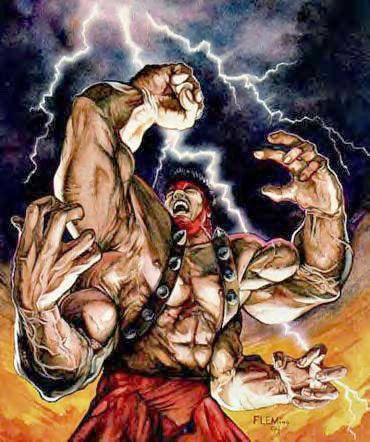 Powers: Forearm’s mutant powers are superhuman strength and resistance to injury due to his two additional appendages and related enhanced musculature. He can lift up to 10 tons.

WTF?: Super-strength is definitely a good power to have, but not if you look like a steroid experiment gone wrong and can no longer fit under the umbrella of inconspicuous. 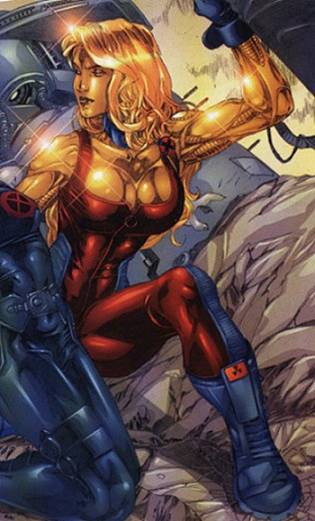 Powers: Lifeguard has a hyper-adaptability mutant power that enables her to manifest personal compensations for different adverse situations in order to save lives, be it her own life or the lives of other people. The range of variability her power is capable of was never measured, she did not consciously choose how or when her power activated. Generally, her default response for all forms of threats was to alter her flesh into a superhumanly-strong golden metal, increasing her strength and durability dramatically. If necessary, she could grow wings (either under her arms or from her backside) in order to fly or additional arms to carry multiple people to safety. She was never seen morphing her body in these or any other way without first assuming her default golden state. Lifeguard also could apparently manifest psychic powers, such as the ability to control water mentally and some form of telepathy. She currently seems to have permanently mutated into a golden avian form with natural wings, claws, and enhanced physical prowess.

With the emergence of her inherent Shi’ar genome, she appears to be locked into her final transformation of gold skin, wings, and claws, still unable to control her powers and possibly unable to transform any further or reverse the change. Her appearance also includes cranial markings and feathers that represent Shi’ar royalty.

WTF?: Her power defines the term “plot-device”. A lazy Chris Claremont post-millenial addition to the X-Men who’s pretty much a deus-ex-machina kind of character. What can she do that makes her such a character with a predictably unpredictable power? Her power is to manifest the right power to save lives. Having the power to save lives? Something about that just doesn’t sound right to me. 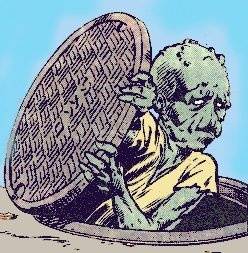 Powers: Leech’s mutant power is the ability to generate an invisible field of psionic energy, with a maximum range of approximately 30 feet from him, that obstructs the neural pathways in the brains of superhumans. This obstruction affects the area of the brain governing superhuman abilities, negating their abilities so long as Leech is in their immediate proximity. Leech can also contract his field so that superhumans around him can utilize their abilities.

WTF?: Again, plot-device!! He’s been around for 30 years and still has the English of a fresh-off-the-boat child immigrant. In that time, neither his speech or mutant power have evolved. He can turn your powers off just by being around you. Or not. Couldn’t they make it so that he can affect machines and electrical equipment, at least? Or affect other areas of the brain?

Powers: Big Bertha was born with the mutant ability to mentally control her weight by manipulating her mass and gravity. By expanding and reconfiguring the fat deposits in her body, she is able to adjust her figure at will. She can cause her body to inflate into a massively obese state. Big Bertha‘s fat and tissue are highly elastic and resilient, allowing her to absorb various forms of physical attack without puncturing, tearing, bruising, etc. Increasing the force of gravity allows her to withstand tremendous forces and impact without budging from the spot. She can also temporarily decrease gravity, allowing her to leap many times her own height up into the air, and then increase her weight again to come crashing down on top of an opponent. She can easily submerge people and objects underneath herself by increasing the gravitational force pulling her down. In her obese form, Big Bertha has some level of superhuman strength, enough to tear off and lift heavy metal pillars with incredible ease. Apparently, Big Bertha cannot remove her extra fatty tissue as easily as she can manifest it. Similar to those suffering from bulimia, she has to retch up the extra fat through her stomach to revert back to normal, regurgitating hundreds of pounds of fat in the process.

WTF?: Ashley Crawford is actually a wealthy and thin, Kate Moss-type of model. She uses her earnings to finance a team of mutant heroes who couldn’t quite cut it as actual Avengers (or X-Men), so they call themselves the Great Lake Avengers. Ashley’s super-heroine nom-de-guerre is Big Bertha. Her power sounds cool. I know plenty of women wish they could do this. Plenty of men too. Only problem is that she can’t remove her extra fatty tissue that easy. In an interesting twist on bulimic models, she has to vomit all of her fat back up to get rid of it. Thanks, but no thanks. 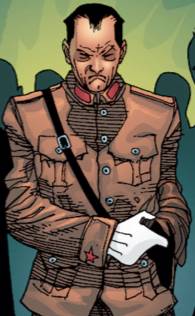 Powers: Ao Jun’s mutant power was a form of self-replication. The human body constantly sheds hair and skin flakes during the day, tiny bits of cast-off from a person. In Ao Jun‘s case, his sheddings underwent rapid cellular growth and regeneration after it left his person, growing into full-sized proto-clones. These copies appeared naked and almost zombie-like, possessing very little self direction and largely dependent on the real Ao Jun to command them. They possessed extremely short lifespans, quickly degrading into biological compost in a matter of minutes, but new copies were always being generated even as the old ones died off. Although not every cast-off became a full-grown duplicate (as that would be literally hundreds or thousands of copies), enough formed so that Ao Jun was constantly surrounded with 2-6 copies of himself, available to fight his battles for him.

WTF?: A Chinese mutant soldier who was made the jailer of a dangerous mutant only after his own mutant nature manifested itself. Grant Morrison had some fun with this one-shot creation. He’s his own best friend, however transitory and quickly replaceable. But, in the end, he had no real place in the super-power food chain. 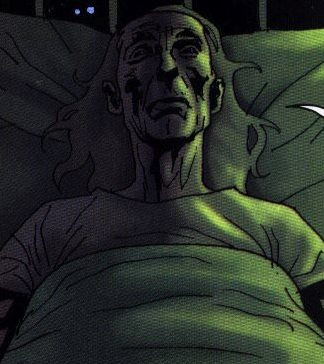 Powers: Jason Treemont’s mutation granted him accelerated aging and a functional immunity to all forms of medicine and medicinal treatments.

WTF?: Introduced as the wealthy CEO of a Chef Boyardee parody, this mutant qualifies as having the most useless power of all. It’s so detrimental that it shouldn’t even be considered a power. His ‘power’ manifests itself as an advanced form of progeria (rapid aging) and an immunity to all forms of medicine and drugs. The second part would be great if…nevermind, it’d still suck. This isn’t a power, it’s a curse. Thankfully, he only lasted one issue.