I guess I watched this mostly out of morbid curiosity.  Last year hosted a cavalcade of big budget sci-fi movies (After Earth, Oblivion, Ender’s Game, Riddick, Elysium).  Now that Edge of Tomorrow is coming out, it seemed time to catch up on some of those I had missed.  Obviously, it made sense to start with a movie that was so legendarily bad I could write a piece on it.

That being said, I don’t plan on doing too many heavily mainstream movies in the future.  The point of “Why Did I Watch This?” has always been the more ridiculous b-movies.  However, that trailer above just seemed so innocuous and the negative buzz was so pervasive that the temptation was too great.

Grabbed it from Netflix and watched it late at night.

Directed by the oft-maligned M. Night Shyamalan, After Earth is set in the far future one thousand years after the human race has moved on to colonizing other planets.  Much to our race’s chagrin, a rival alien race is also after these other planets and employs predatory aliens in their arsenal called “Ursas” who can smell fear.  Will Smith plays Xander Cage, uh, I mean, Cypher Raige, who has perfected the action of fighting without fear as the Commander General of the elite Rangers.  His son, Kitai, is trying to become a Ranger, but has been passed over due to trouble controlling his emotions. 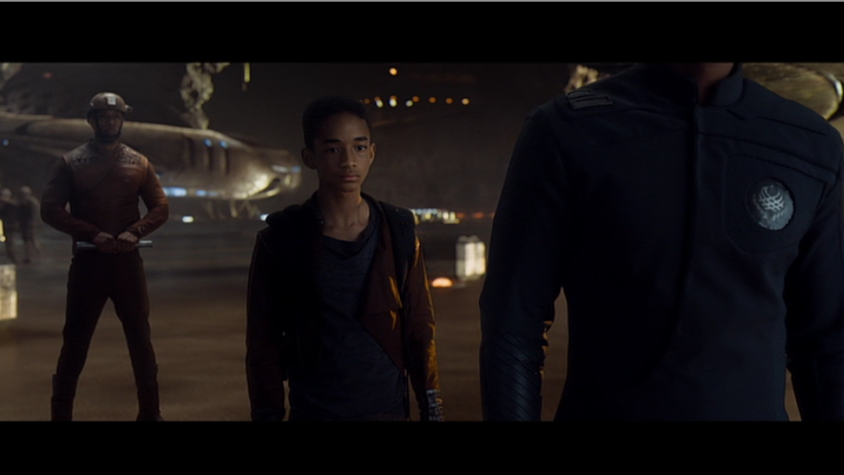 After this exposition (and an absolutely terrible green screen moment in an airplane hangar that makes the actors themselves look CGI), the father/son duo crash land on the humanless Earth.  Cypher’s legs are broken, so he enlists Kitai to find the tracking beacon that will call for help when activated.  Unfortunately, he needs to travel several miles as the beacon was in the tail of the plane which detached and separated during their violent crash.  It might seem strange that this doesn’t happen automatically during a crisis or why they can find it miles away if it has yet to be activated, but I guess I’ve seen worse designs.

The whole movie is a bit of a missed opportunity.  While I don’t think it quite earned its atrocious reputation, the end result is ultimately boring and unimpressive.  Kitai travels from one setpiece to another with such quickness that suspense is minimal.

He’s poisoned and immediately takes the anecdote and takes a nap.

He’s attacked by baboons and gets away in less than a minute.

He freezes and passes out, only to be immediately rescued by his giant eagle friend (seriously).

There are so many flashbacks and empty speeches about how emotions aren’t necessary that not enough time is allocated to flesh out the actual threats.  If you want to make a movie entirely about someone running through a forest while random craziness happens to them, please watch Apocalypto first to get a general idea of how to maximize tension and palpable action.

I hate to fault a movie for not being the type of movie I wanted it to be, but it’s just so easy to when After Earth drops the ball on so many vaguely intriguing ideas.  Shyalaman establishes early on that there was an Ursa on board.  Instead of hanging that spectre over the entire proceedings or making the alien a major obstacle, it isn’t re-introduced until the last few minutes when it’s revealed that the monster escaped its cage in the tail of the plane after the crash. 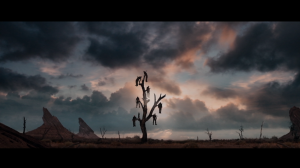 Shortly before their climactic battle, Kitai even finds a tree decorated with the impaled bodies of his fellow deceased spaceship passengers.  As it turns out, the Ursa uses intense psychological torture tactics like this in order to elicit fear in its prey.  And THAT’S AWESOME!  Why not make the entire journey across Earth about Kitai’s conflict with an escaped Ursa?  Who cares if the movie just ends up ripping off Predator?!  Shyalaman already spent a good time of the movie explaining the threat of the Ursa.  Delivering on that threat is called a “payoff”.  Plus, Predator is the best sci-fi action of all time!  I shouldn’t have to explain this… these are professional filmmakers here.

And that’s not the only idea that obviously would have been better than the product that ended up on the screen.  From the IMDb Trivia section:

The original idea for the film was a father and son on a camping trip. After the car they’re traveling in careens off the road, the son makes his way through the forest to find help for the father. Realizing that the idea had greater potential, producer Will Smith and screenwriter Gary Whitta decided to adapt the basic survival concept into a much larger science-fiction project. 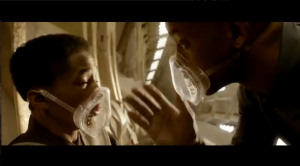 Why’d they change that idea?  Are you telling me this mess could have been a high-concept survival film set in Alaska where Jaden Smith fights a bear and a pack of wolves?  They could have ratcheted up the tension of man vs. nature instead of making a movie about a father telegraphing his son’s every move through an earpiece and watching via camera drones!  How does a big budget sci-fi movie with underdeveloped ideas have “greater potential” than a tightly executed thriller that could have played well with mass audiences and (ideally) the art crowd?  That would have solved many of the issues the film had with inconvenient technological advancements (spacesuit helps you fly, but doesn’t cover enough of your body to minimize the emanation of pheromones), poorly-executed accents, and an unnecessarily bloated production budget!

Highlight?
The complete dryness of the characters actually served a single scene of dry humor fairly well.  After Kitai wakes up from incapacitation caused by a poisonous leech bite:

Cypher: You are correct.

Other than that, the movie was an emotionless slog.  Interestingly enough, Jaden Smith was actually not bad at internalizing an intense fear that inhabits his every movement.  Too bad he does it so well that it only serves to make his transition to a fearless warrior feel completely unearned and unrealistic.

Just like the previous, mildly amusing snippet of dialogue the following line was delivered with virtually no affectivity for much less effective results:

Jaden (worried about something): My suit is turning black.  I like it, but I think it’s something bad!

But the actual major misstep had to be the complete lack of logic throughout.  Why would a child so intent on impressing his perfect father be so willing to disobey him in a life-or-death situation for implausible reasons 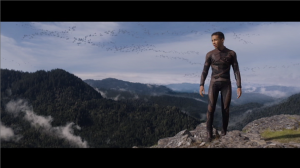 (or alternately, why would a child so intent on becoming a Ranger be so willing to disobey the Commander General of the Ranger Corps)?  At one point Cypher tells his son to stand down when confronted with a giant, killer baboon.  So of course, he throws a damn rock at the monkey’s head.  What?  Chill out!  As expected, the baboon has friends and Kitai gets chased and hurt.  Guess he should have listened to the Commander General of the Ranger Corps who might have some experience in those types of things!  Maddening.  Scenes like that happened throughout, to a point that the whole premise of the movie was ultimately ludicrous.  When the tone of a film is so dire, its engagement with audiences often hinges on the plausibility of both story and characters.

I didn’t totally hate watching it.  It was rather lifeless and head-scratching, but mostly just sat there like a lump instead of outright enraging me.  Overall, it’s simply a sleight film that was mostly stupid, but so desperately lacked emotion that it was nearly impossible to be offensively bad.  The good news is that since I finally wrote up a big budget movie for once, I can post the hilarious Honest Trailer below (they even have a shout-out to the same two random attempts at humor I highlighted above):

All images courtesy of Overbrook Entertainment