Why Did I Watch ‘Bloodlust!’: The Not Particularly Dangerous Game

Bloodlust! is just one of many versions of Richard Connell’s short story, “The Most Dangerous Game” (oh, can’t forget this gem).  It came into my possession as part of one of those ultra-cheap collections of 50 Horror “classics” that sounds exciting at first, but then ends up just including a preponderance of public domain films that nobody gives a shit about.

Most importantly, the title has an exclamation point in it!  Little details like that are guaranteed to make a movie a classic.  That’s why Faster, Pussycat! Kill! Kill!, Oliver!, and Stop! Or My Mom Will Shoot all won the Academy Award for Best Picture.*   The only drawback to such exuberant spelling of a title is that mentioning the title in the middle of a sentence does a number on your autocorrect capitalization.

Of course, there is a Mystery Science Theatre 3000 version which I didn’t even know existed until doing post-viewing research for the article.  When you’re alone, having some friendly voices to pipe in helps a lot… but unfortunately this was a purely solo effort.

From the onset, Bloodlust! makes it clear that it’s going to be a fairly brainless experience.  As a sort of predecessor to slasher fare, the character archetypes are simply there to provide shortcuts before we get to the main storyline.  At a lean 71 minutes, there isn’t a whole lot of room to give the actors much more than that to work with.  The film immediately introduces us to a chartered yacht rented by two young couples: A randy jock (The Brady Brunch’s Robert Reed) and his strong-willed, judo-loving girlfriend (June Kenney); as well as a skittish beauty (Joan Lora) and her nerdy boyfriend (Eugene Persson).  Their captain is even a rambling drunk who tries to warn them of the dangers if they set foot on the creepy island (“The Harbinger” for Cabin in the Woods fans).  Since there wouldn’t be a movie if they heeded his words, they row ashore. 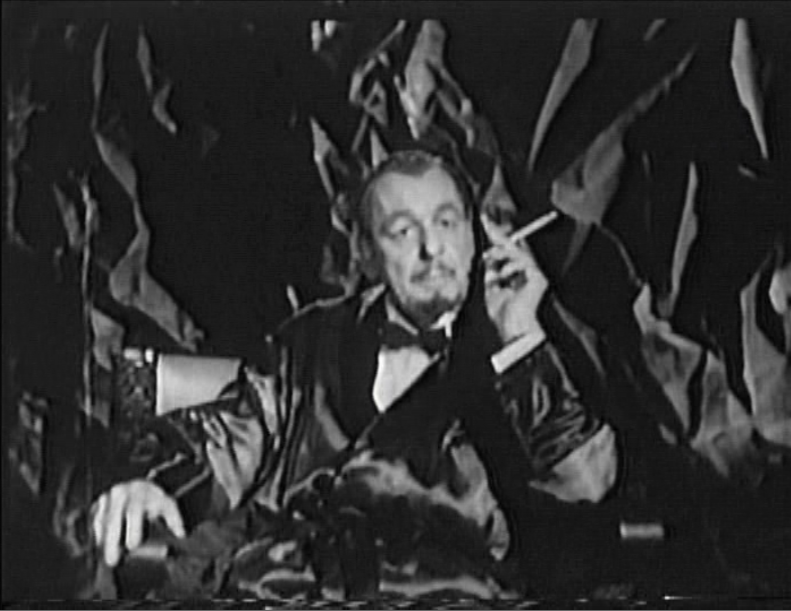 It’s here that they meet the creepy Dr. Albert Belleau (Wilton Graff, aka, the poor man’s Vincent Price).  Although he saves them from an animal trap on the island, it’s pretty clear that something weird is going on when Belleau insists that they sleep it off and wait until morning to head back towards the boat.  He claims the wild beasts in the jungle aren’t worth the risk, but the “heroes” of the tale have a hunch there is something else going on with their eccentric host.  It’s not much of a hunch, since anybody could have told you that from all the taxidermy hunting trophies and the man-servants who are dressed as Russian sailors.   Contrary to all logic, they put off a night’s rest and decide to explore the mansion, where they encounter Belleau’s wife Sandra and the employee with whom she’s having an affair.  These characters usefully explain that there are murderous going-ons at the estate and bring the four stranded kids along on their planned escape from the villainous mastermind.

Unfortunately, Belleau foils their plans, turns his wife and her lover into another hunting trophy, and explains to the characters that during his time as an Army sniper he discovered an insatiable “lust for blood”.  “Lust for blood” is mentioned about three times during this repetitive monologue.  Since he now has witnesses to deal with, to the hunt we go!  Belleau ropes in the drunk yacht captain and makes the five of them run out into the jungle with a gun and a single bullet, while he hunts them down with a crossbow and five arrows.  The inebriate steals the gun and leaves the kids to fend for themselves.  Of course he’s automatically dispatched by Belleau (they received a gun and a bullet, but no firing pin… Belleau’s such a jokester!) and the movie continues to be incredibly boring.  See, the “heroes” don’t really do anything except explore the house.  There are approximately 3 sequences of “let’s search around for stuff,” while all the significant action is undertaken by side characters (i.e., henchmen, the drunk yacht captain). 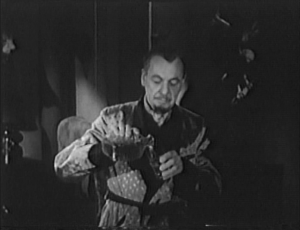 Even the main antagonist gives up hunting after, like, 15 minutes to go back inside and pour himself a glass of scotch.  Seriously, what a pisspoor hunter.  After he kills the boat captain and watches a foolish minion step into quicksand, he kinda looks around and shrugs his shoulders as if to say, “Eh, I’ve done enough… I’ll kill the only people who pose a threat to my evil pastime tomorrow.”

The plot even shows a glimmer of promise when Sandra and her lover are killed.  Since they were the impetus and source of all the conflict with Belleau, there’s that nagging sense of intrigue of what the heroes are supposed to do now that the only capable characters are gone.  However, that doesn’t pay off at all since the remaining characters don’t encounter the source of their struggle again until the climax.  At this point, they have snuck back into the house to steal some guns and Belleau’s just chilling out with his scotch.  Suddenly he hears people bustling around… hidden in the darkness of his trophy room.  As with the earlier monologue about his “bloodlust” (oh, now I get it) he incessantly rambles about how he’s going to win against the unseen intruders.  Actual transcript:

“Strange about these old walls: smallest sound is amplified.  If one sits quite still, one can hear the slightest murmur.  Sometimes even the slightest breath.  Certain closeness about this place.  I’ve never corrected it.  It helps preserve my trophies.  But at times, it does make breathing difficult.  I’ve sat here so long, that I find I can sit for hours and not make a single sound… not a single sound… a single sound.”

Jesus!  I get it!  You just spent 2 and a half minutes talking about how easy it is for you to be quiet.  Clearly that’s not true, since you repeated the phrase “a single sound” twice! 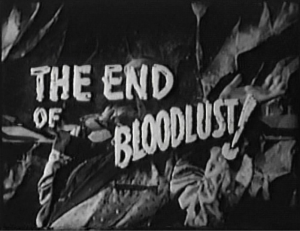 Remember how I mentioned the “heroes” were useless?  Well, after they’re discovered (it’s always a sneeze that does you in during moments like this), the four of them are standing there and waiting to be shot by the least successful hunter in recent memory.  Then they’re saved by that goon that sank in the quicksand earlier, who has now become a mindless engine of revenge and is somehow impervious to bullets.  Apparently the henchman survived and is pissed that his boss chose not to save his life.  Belleau gets lifted off the ground and has his outstretched hands nailed to a trophy display case because, uh, Christianity, I guess?  Earlier in the film when Belleau mentions that his original victims only consisted of death row inmates, it seemed like the movie might start to explore some themes of morality and redemption.  But it doesn’t.  He simply gets gorily crucified while the good guys kind of sit there while they shield their eyes and scream… just like they’ve been doing all movie.

There are a few, mostly inconsequential moments of unintentional humor.  For one: it is explained that some “renegades from the mainland” have been stranded on the island since the time of whatever unnamed conflict caused them to be renegades.  During the hunt, Mike Brady and the gang encounter one of these hopeless characters.  Being stuck in the jungle all this time presumably got to him, because all he does is hilariously scream at the top of his lungs for nearly 3 minutes straight.

Even better is an incredibly simple comic beat in the first scene of the film.  We open on on the young adults on the boat’s deck cuddling and skeet shooting.  The ship lurches violently and it cuts to the drunk as a skunk captain, hollering unintelligibly.  It cuts back for a bit to the main characters who get to talking and decide they might want to go to shore.  They shout up to the unseen captain, “Hey, Tony!  Can we take out the rowboat?”  Camera cuts back to him completely passed out on the deck.  It’s a nice laugh-out-loud moment in a pretty vacant film.

Besides being boring (or perhaps its the cause of the lackluster plot progression), all the main characters are unrelatable wet fish.  The secondary couple (the nerdy wimp and the wimpy chick), seem to be present for the sole purpose of complaining.  Why even write them like that if not to kill them off?  The male one of the two is incredibly quick to give up.  He ends up with some leeches on him and despondently says, “I can’t… I can’t make it, Johnny.  I just can’t make it!”  This is because he has less of a will to live than the kids from Stand By Me. 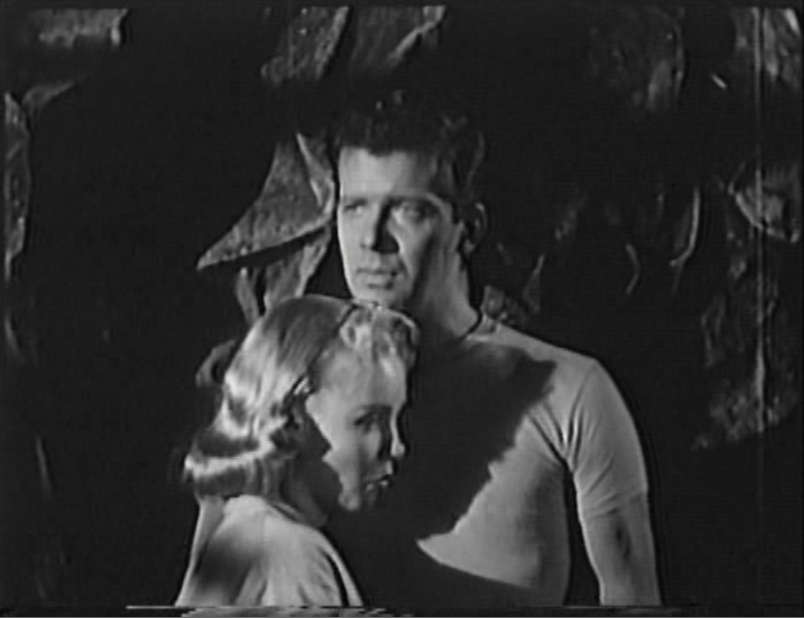 On the other hand, I’m pretty sure 60% of his girlfriend’s lines are yelps, screams, or the phrase “I don’t understand any of this!”  At least they establish how dense she is early on in the film.  At one point they see a wreck ashore and she digs up a woman’s corset.  She asks, “What is it?  Pirate’s armor?”  Her boyfriend laughingly replies, “I think you’re too young to know what it is!”  What?!  Aren’t you guys in college together and dating?  How does she not know what a corset is and you do?  Are corsets really that scandalous?  Meanwhile, the surprisingly hulking Robert Reed’s only purpose is to blandly push the indecisive group forward, otherwise they would sit around and mope all day.  Only Betty, the fourth member of the group, gets an opportunity to shine when she uses both her smarts and judo skills (of course that was going to come back) to get out of a couple of scrapes. 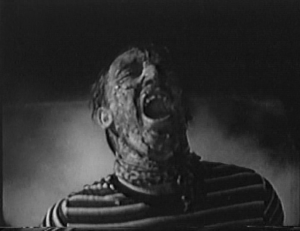 As a cultural artifact that barely takes up an hour of time… sure, it’s technically not a complete waste of time.  But keep in mind it hasn’t aged well.  It’s light on character, story, and action.  Really, it’s only heavy on “shock value”.  Belleau’s end is especially bloody, while one henchman gets eaten alive in a vat of acid.  However, relying on this type of visceral impact isn’t going to provide the same effect now as it did in the 50’s.  Wait… this was made in the 60’s?  Ugh, it’s even worse than I thought.

I’ll post the MST3K episode below for your viewing pleasure… but first make sure you check out the rest of 2014’s Schlocktoberfest!

Schlocktoberfest Part 1: KISS Meets the Phantom of the Park

Schlocktoberfest Part 3: You just read it!

*Note: Only one of those movies actually won the Best Picture Oscar… I think the one with Stallone.