Donkey Kong Is Why It’s On

Which side of the cosplay war are you on?

Have you heard about the war on cosplay? How about the ban on booth babes?

Anyone who knows me, knows I love to dress in costume. Themed parties, conventions, social experiments, you name it. In recent months, concerns have been raised about how this can and has “negatively” impacted business and in some cases, take the “family friendly” out of events. In this case, I am speaking of conventions such as PAX, E3 and Comic Cons.

Who doesn’t like all the awesome costumes at a Comic Con? Well, these guys sure don’t. Their point, cosplayers   “contribute nothing” to conventions like this because they take away from business that the venders should be getting. Well here’s my 2 cents based off my own experience at conventions that allow people to dress in costume. Cosplayers get a ton of attention. I can see how they can take over an event, I’ve seen it with my own eyes, I’ve been a part of that madness. While vendors have paid for a table at these conventions to sell their goods, in some cases, paid for a plane ticket to get there and have paid a hefty weekend rate at a hotel to sit long hours to make a buck, I can understand how one may resent the focus being taken from their business. You have 100 cosplayers being stopped in front of your table for pictures and the ones who glance at your table aren’t buying. I get it.
Now, get this, as someone who dresses up to these conventions, I’ve spent my fair share of money too. Not only have I spent a small fortune on materials for the costume I have made, I spent countless hours making it. How does that saying go? Oh yeah, time is money. My time is as valuable as yours so why not show off what all that time and money went into? It’s in the same spirit of what the convention is all about.

So what does that have to do with your business? Did I forget to mention the fact that I never leave a convention empty handed? Not all people who are not in costume are buying something, let’s not forget that first and foremost. My glance at your table wasn’t just to humor you, it‘s so I make a mental note of what I want to buy when I am out of costume. It is almost impossible for me to make a purchase while in costume. Sometimes I have no place to store cash safely and if I do have money on me, the amount of time I’m taking pictures with people, doing interviews, etc., is literally non-stop. The times I have walked around with my purchases in costume, I have to dump my loot on someone or the ground every time I’m stopped for a picture. Not to mention while some plain clothed patrons visit the convention one day out of the whole weekend, I’m also paying for a hotel to be there all weekend, just like you. My travel expenses aren’t free either.  This isn’t just my story though, this is the story of many cosplayers.

So why am I surprised that a comic book artist would be so mad about this? It’s hard for me to believe that an artist could not appreciate someone else’s creativity, whatever it may be. Maybe it’s not your taste, but it’s still something to behold.  It’s tough for the artist, I know, I am one. So it’s not like I don’t understand an artist’s frustration. I just think the frustration is misguided in this case. You have lots of direct competition here. Even if you’re not selling the exact same thing, you are all within the same theme of products to offer. Many intentional buyers are looking for $1.00 bin comic books, and rare items while the majority of attendees in general have come to meet their favorite artists and writers, get their comic books and posters signed and see guess who? Cosplayers! As mentioned on the nerdist, cosplayers bring their own value to these events. 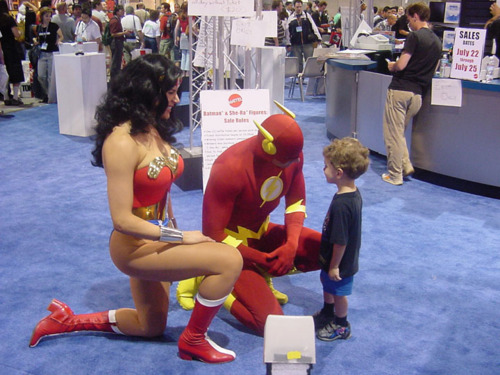 If you think this kid didn’t have the best day ever, then you’re 50 shades of cray.

Like some art may not be one’s taste, some people just don’t like cosplay and that is okay. It is my belief that this is the case for Pat Broderick and fellow haters and that is the real reason cosplay is to blame. I wasn’t always a fan until I started doing it myself. Funny how life works sometimes isn’t it? So while it is okay to not like cosplay, it’s not okay to say cosplayers are the reason for your lack of business just because you feel the need to blame it on something. It’s so easy to pass off the blame on something that doesn’t float your boat isn’t it?

If I am wrong here, then Pat Broderick and friends seem to be in the class of artists I know to be cantankerous, bitter, (jealous?) types that are probably not really happy for your business because they’re not getting the same. There are a number of artists and writers that don’t make much in return by way of $$$, but most still come back every year for the fans. Maybe you should reconsider your marketing strategy. Or maybe you should just stop going to conventions because cosplayers aren’t going away anytime soon. Everyone wants to meet the artist, but if people really care about your work, they will buy it from anyone who’s selling it.  If they don’t, they will buy a Batman print that suits their taste from one of the 100 other artists that have one for sale.

Maybe one day when you come up with an original character in an original comic book, I will cosplay that character. Not to piss you off, but so you know how awesome it feels seeing your work come to life. To feel the honor that comes with knowing someone admired that character so much that they took the time and spent the money to make it real. Your world may be turned upside down and you just may change your opinion, sirs. 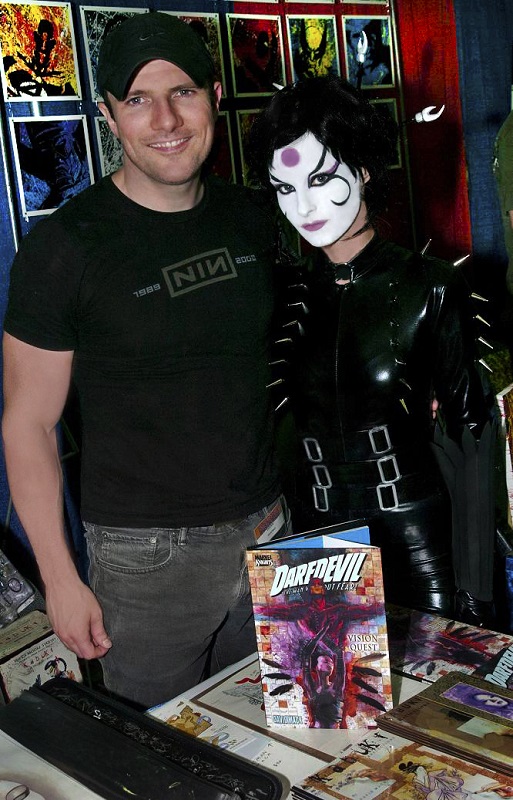 Myself with writer/artist David Mack at Baltimore Comic Con in 2012. I was dressed as the character Scarab, from his original comic book series, Kabuki. Appreciation was definitely mutual here.

Speaking of marketing strategies PAX (Penny Arcade Expo) has joined E3 in the decision to Ban booth babes from their shows. Good strategy? These “booth babes” have been a part of these types of conventions as much as they have been a part of car shows and game shows. It may be safe to say that the people who attend these shows know what to expect. It’s always going to be someone’s first time, no pun intended, but many of those first timers have seen the general display online or on T.V. before. 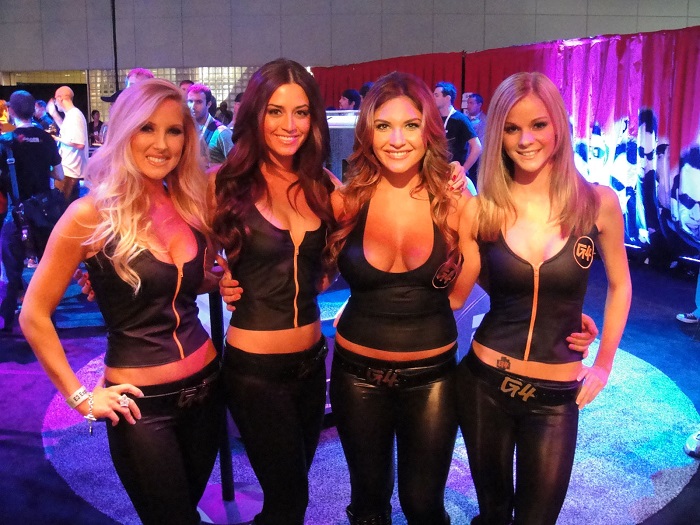 The decision has come after some people have expressed discomfort with the “Sex Sells” strategy. So like E3, PAX wants to get the focus back on the primary reason for being there while making sure everyone feels welcome. Most shows like this are open to all audiences. “Family friendly” or “kid friendly” is in question when scantily clad women are ever present. This brings us back to cosplayers, as this has been a concern garnering more attention as costume heavy conventions are growing more popular.

We’ve all seen it, a little too much skin exposure in some costume and uniform choices. Sure some people do it for the attention while having no significant knowledge of the character they are representing, but some people are just trying to accurately portray a character as he, she or it has always been depicted. There are so many choices out there by way of characters to cosplay, but if I asked you to name female characters that have been created without all their parts bursting out all over the place, you’d have a very short list compared to the ones contrary to that.

We can put our own spin on any character to make them more decent while still being recognizable. But for many people, it’s easier creating a costume that has references to go by. All most cosplayers are doing is following the lines of which their characters have been drawn. It is in this essence, that cosplayers and booth babes are related. Both are being attacked for taking attention away from the main focus, and both are at risk of facing major changes or bans. I myself have felt that some people cross the lines where they don’t have to with their attire. Over sexualizing a character already “sexy” enough which always leaves me feeling awkward, uncomfortable and a little embarrassed when it comes to all the Fisher Price eyes in attendance. It’s going to be extremely difficult to have everyone please everyone in this situation right? Or is a ban really the only answer for this?
Would banning booth babes and cosplayers stop you from going to any of these shows? The answer is, probably not. At least for me, and at least for anyone who actually cares about the product and not the theatrics. But come on, it’s so much more exciting with eye candy! 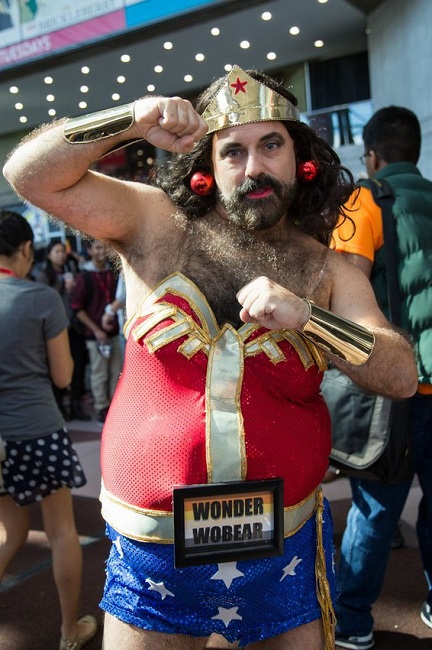 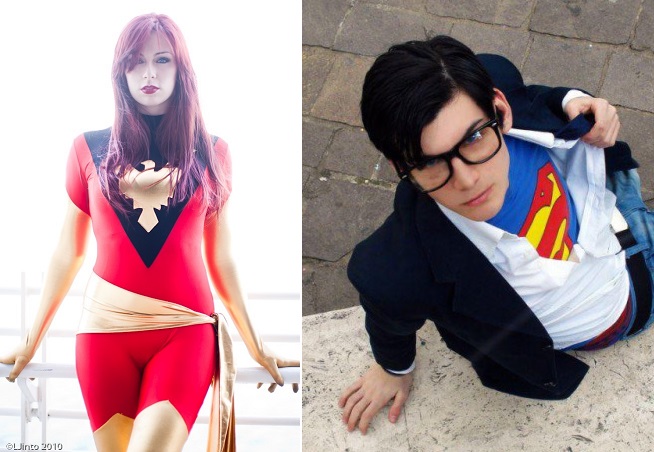 There we go, that’s better.