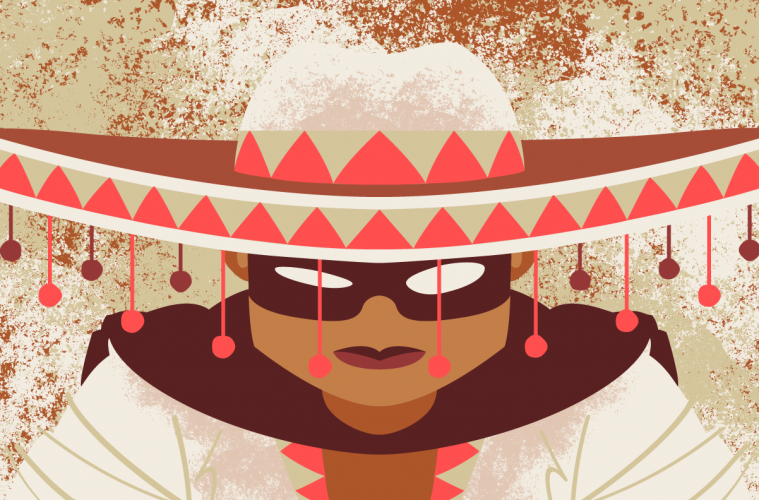 Some things are just too good to stay dead. Such is the case with the “Spaghetti Western.” Popularized by Italian filmmakers such as Sergio Corbucci and Sergio Leone, the subgenre always manages to walk back from the sunset for another revival. A few years ago, Rockstar’s Red Dead Revolver and Red Dead Redemption renewed interest in the “western all’italiana” by putting gamers inside a Zapata-esque open world experience. More recently, director Quentin Tarantino teamed up with composer Ennio Morricone (a fixture of the genre) for Django (2012) and Hateful Eight (2015), bringing the public’s attention back to this particular style of filmmaking. Now Nick Robalik of the game studio Pixel Metal is tossing his sombrero into the genre with…Sombrero, a breakneck platform game that puts the frenzy in For A Few Dollars More!

We had the pleasure of speaking with Nick about the game, its development, and what players can expect when it comes to Steam and consoles in the near future. As you’ll read below, not only is Robalik a fan of the Spaghetti Western, but he’s injecting Sombrero with that enthusiasm as well. Read on… 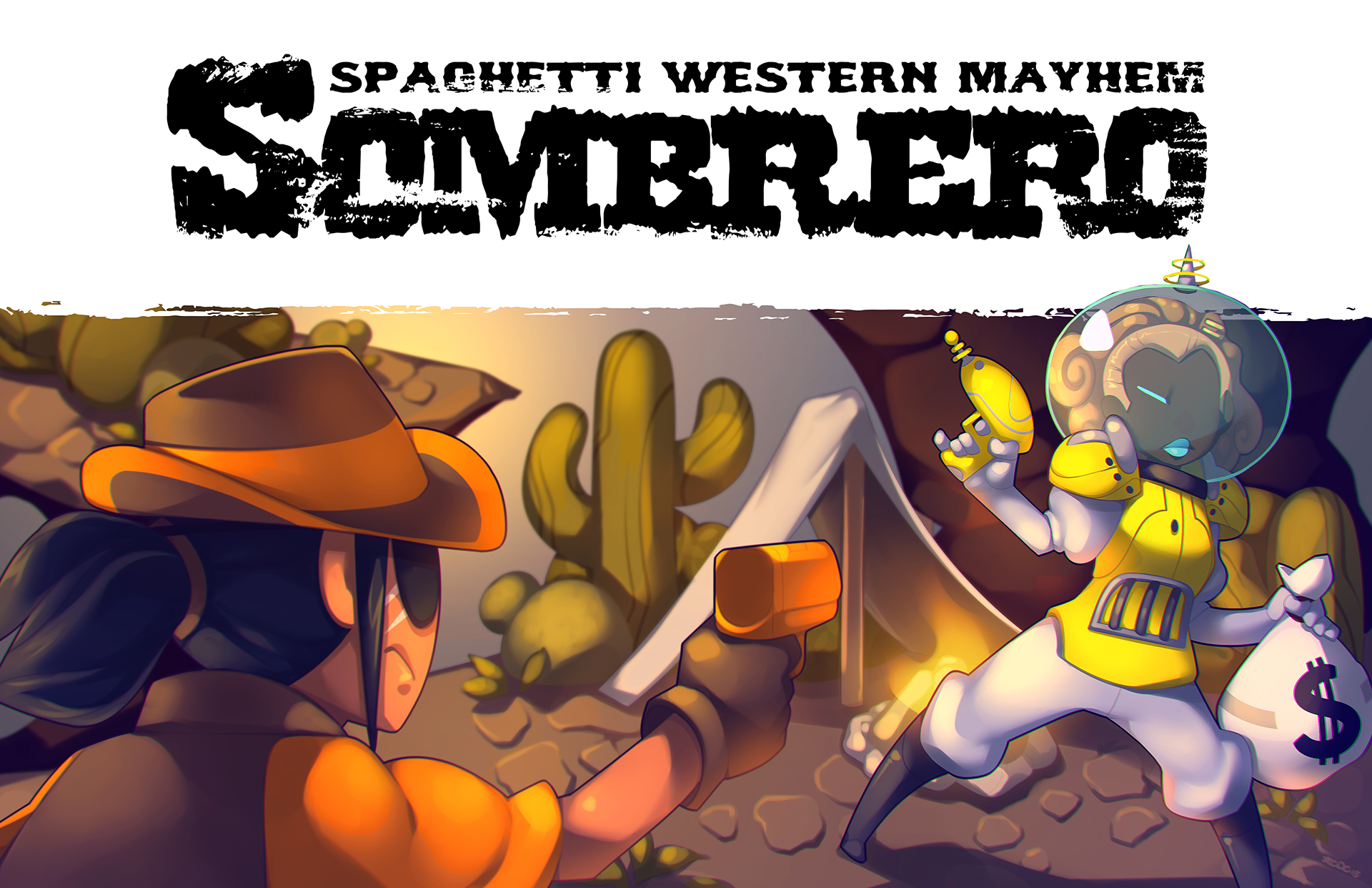 Action A Go Go: So for our readers, can you explain what Sombrero is?

Nick Robalik: Sure! Sombrero is a Spaghetti Western-themed competitive multiplayer platformer. It’s somewhat comparable to stuff like Smash Bros. or Towerfall in that it’s geared specifically towards multiplayer, though it plays much faster than either of those games and being western-themed, has shooting in it. The stages are also larger. I’ve overheard a few gamers say Duck Game is a little bit similar when they’ve tried Sombrero at an event, but I haven’t played that yet.

AAGG: Is it safe to say that Donkey Kong was somewhat of an inspiration here? I see it a bit in the level design.

Nick: I don’t think I’ve heard that comparison before! I guess a couple of the stages could appear similar in stills, though it plays very differently. Sombrero is heavily invested in keeping the player moving from platform to platform at all times, so I suppose in that sense they have some similarities. 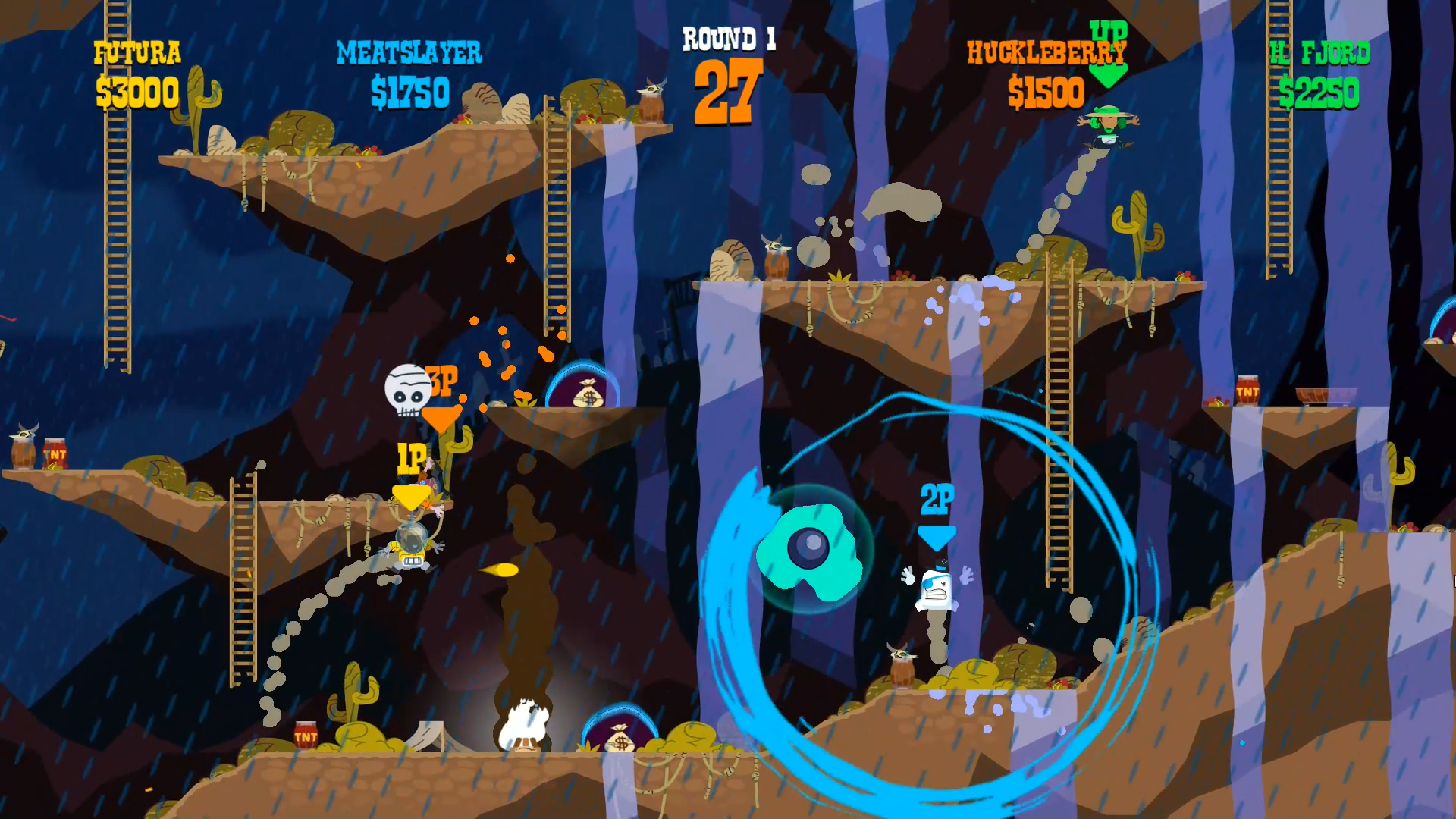 Nick: Because Spaghetti Westerns are awesome!

AAGG: LOL! Do you have a favorite Spaghetti Western?

Nick: Once Upon a Time in the West. It’s lacking in Eastwood but is chock full of Bronson, and still has one of the best opening scenes of any film. 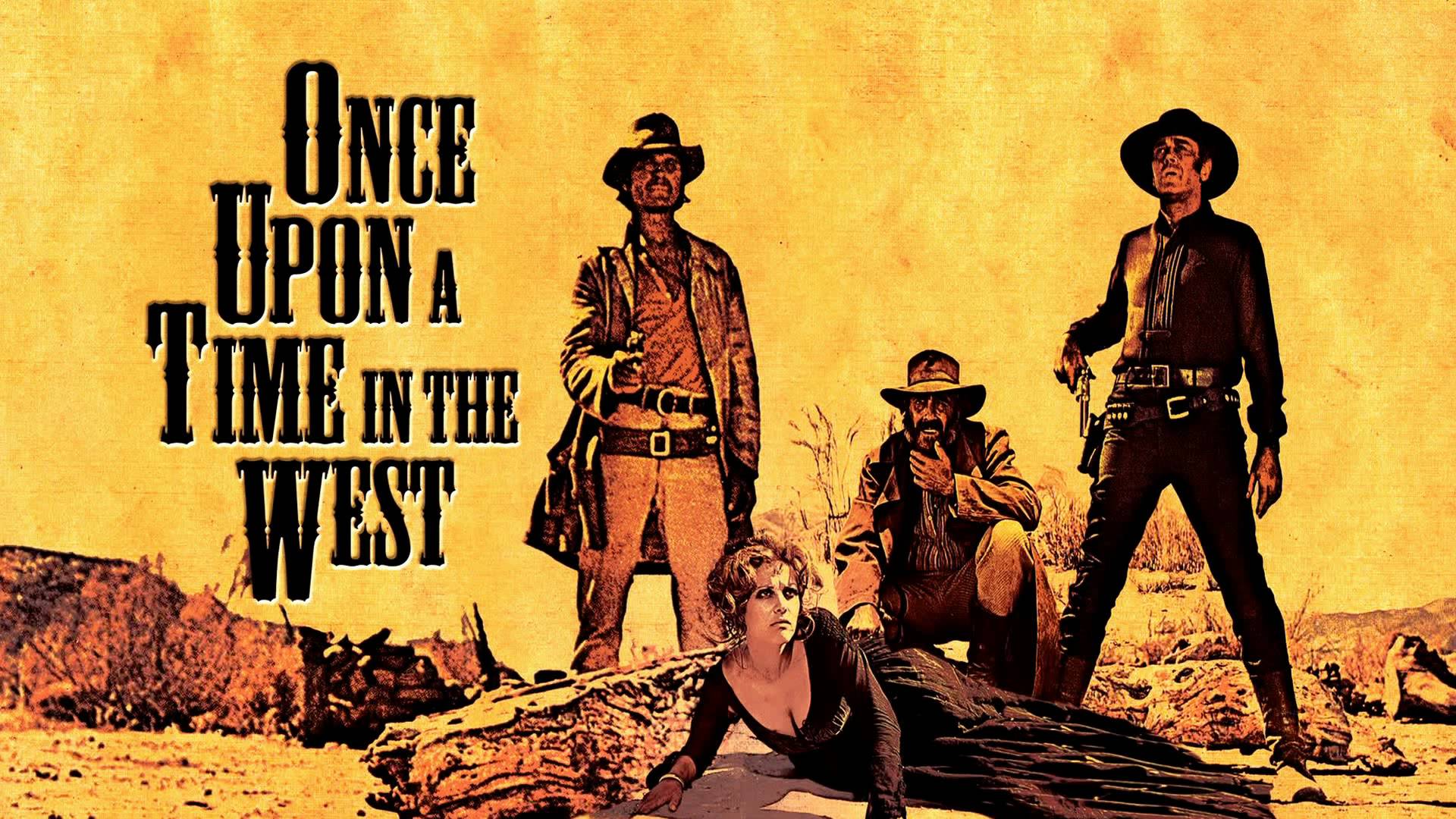 AAGG: How big is your team?

Nick: I have a composer working on the soundtrack and when I’m doing promotional stuff I have a freelance PR guy I work with, but other than that it’s just me, and until recently only in my spare time outside of my day job.

AAGG: Where are you in the development process now?

Nick: Everything I’d initially planned – plus a lot I didn’t plan – will be in the game in the next month or so. I started talks with a publisher a few months ago and they’re interested in seeing a few additional features added that I think could be of benefit to the game if I go the publisher route. Those features would add a few months to the development timeline. 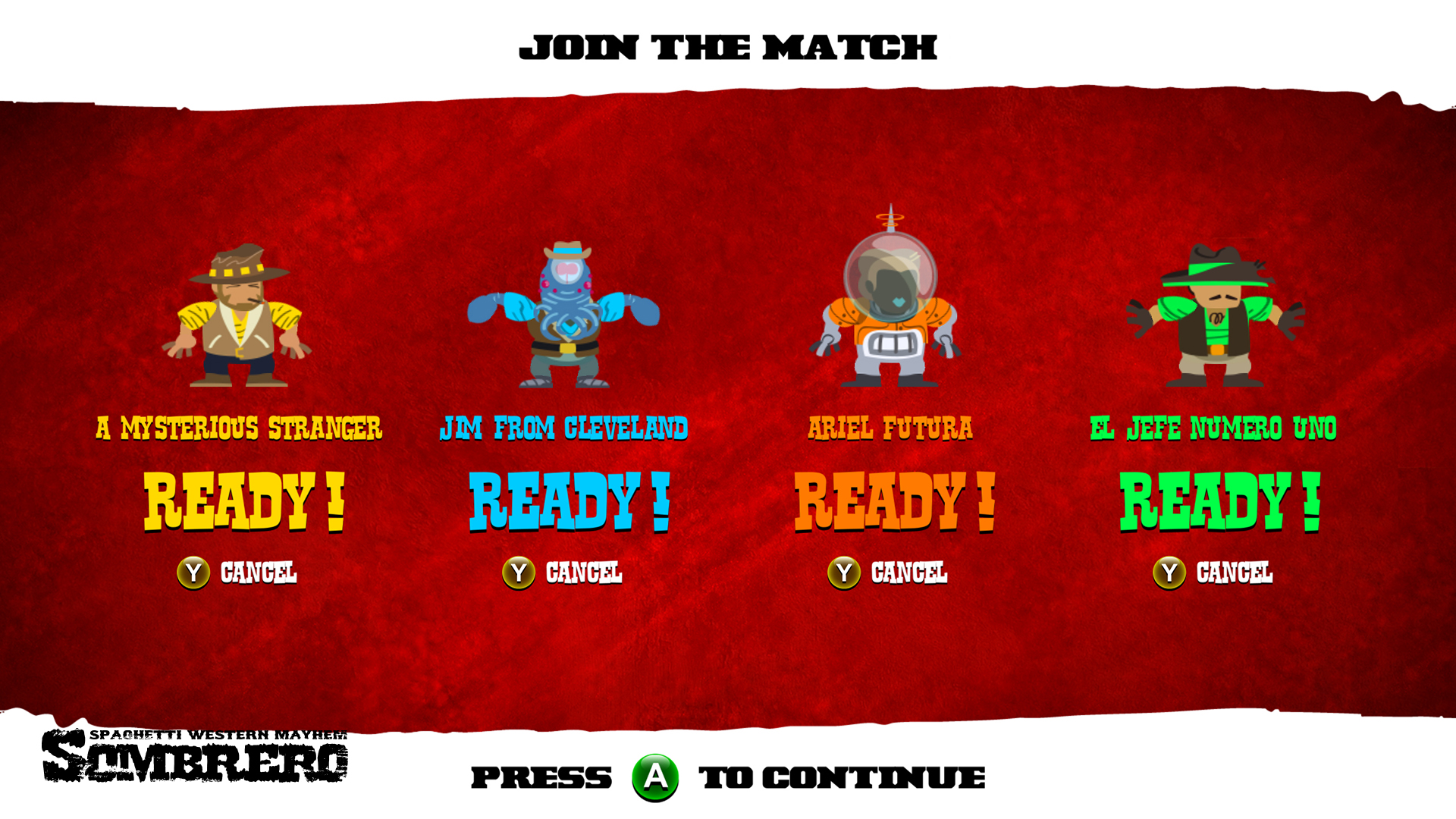 AAGG: You have a unique cast of characters ranging from humanoid to dairy product. How did you decide what characters to include?

Nick: I started out with characters based on the various archetypes that usually show up in Spaghetti Westerns, then I started adding in some of the weirder non-western characters. I’ve got a “game bible” that includes the basic story of the game and that’s helped me figure out where there’s holes that I can fill with new characters. It’s been a pretty freeform process and I’m sure more characters will end up in the game post-release.

AAGG: Any personal favorite in the cast?

Nick: People who try the game seem to like Jim from Cleveland a lot. He’s a blue tentacle-faced alien in a comically small cowboy hat. He was the result of a very late night messing around in Illustrator while watching bad 1950’s sci-fi.

I’m a partial to El Jefe, who’s been in there since I started prototyping the game out a few years ago. His doodle on a post-it note started the game’s development. That was probably back around the end of 2011. I found the doodle again when I was cleaning out my desk around mid-2012. 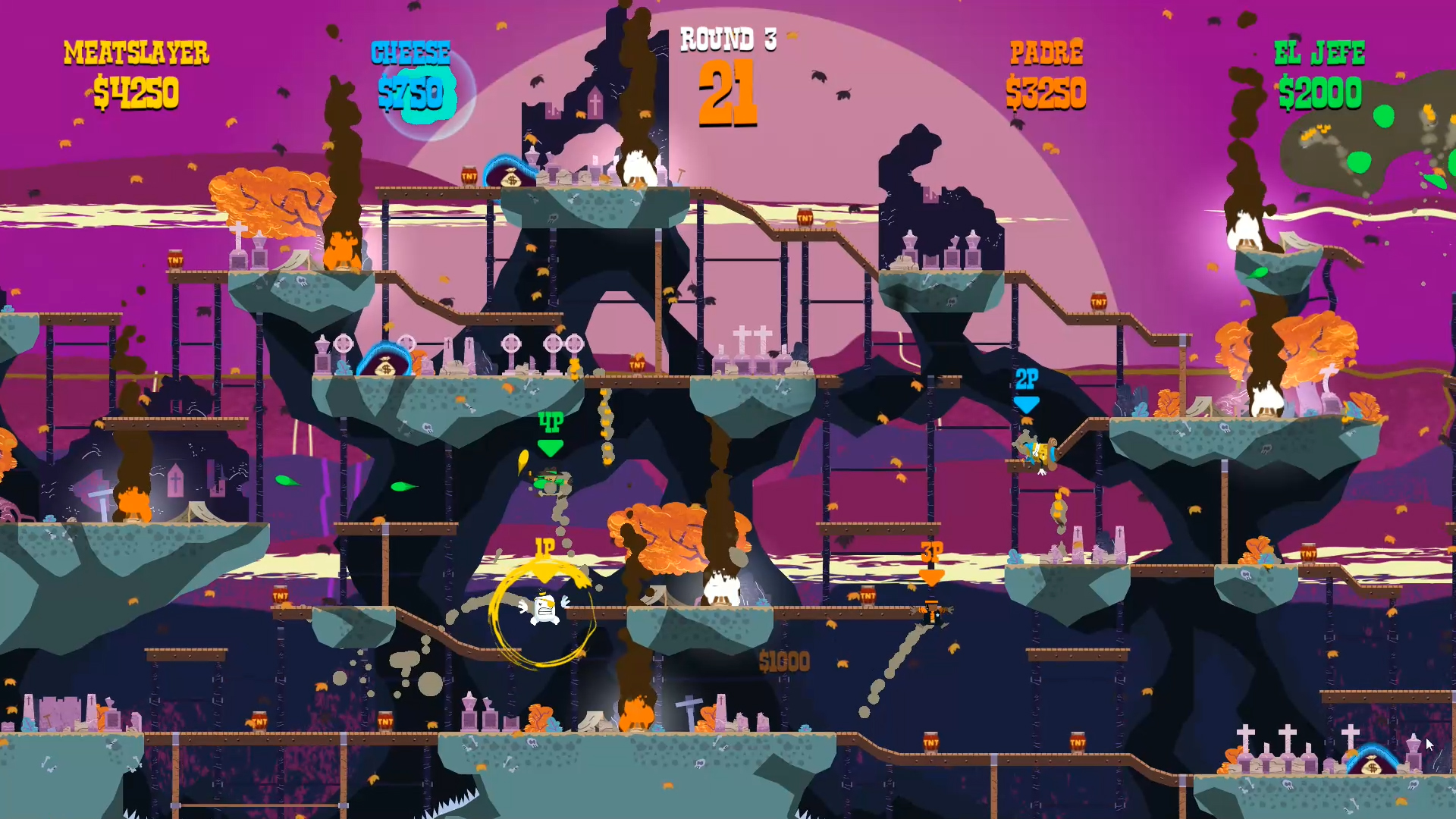 AAGG: What can players expect from the environments in the game? Can they help or hurt?

Nick: The stages are pretty varied and have elements unique to each, from something as simple to ladders to destructible platforms over pits of spikes. So you can blow up a platform underneath a player with a weapon powerup or one of the barrels of TNT laying around and send them tumbling down. It’s a great way to end friendships.

AAGG: Where did your inspirations for levels come from? 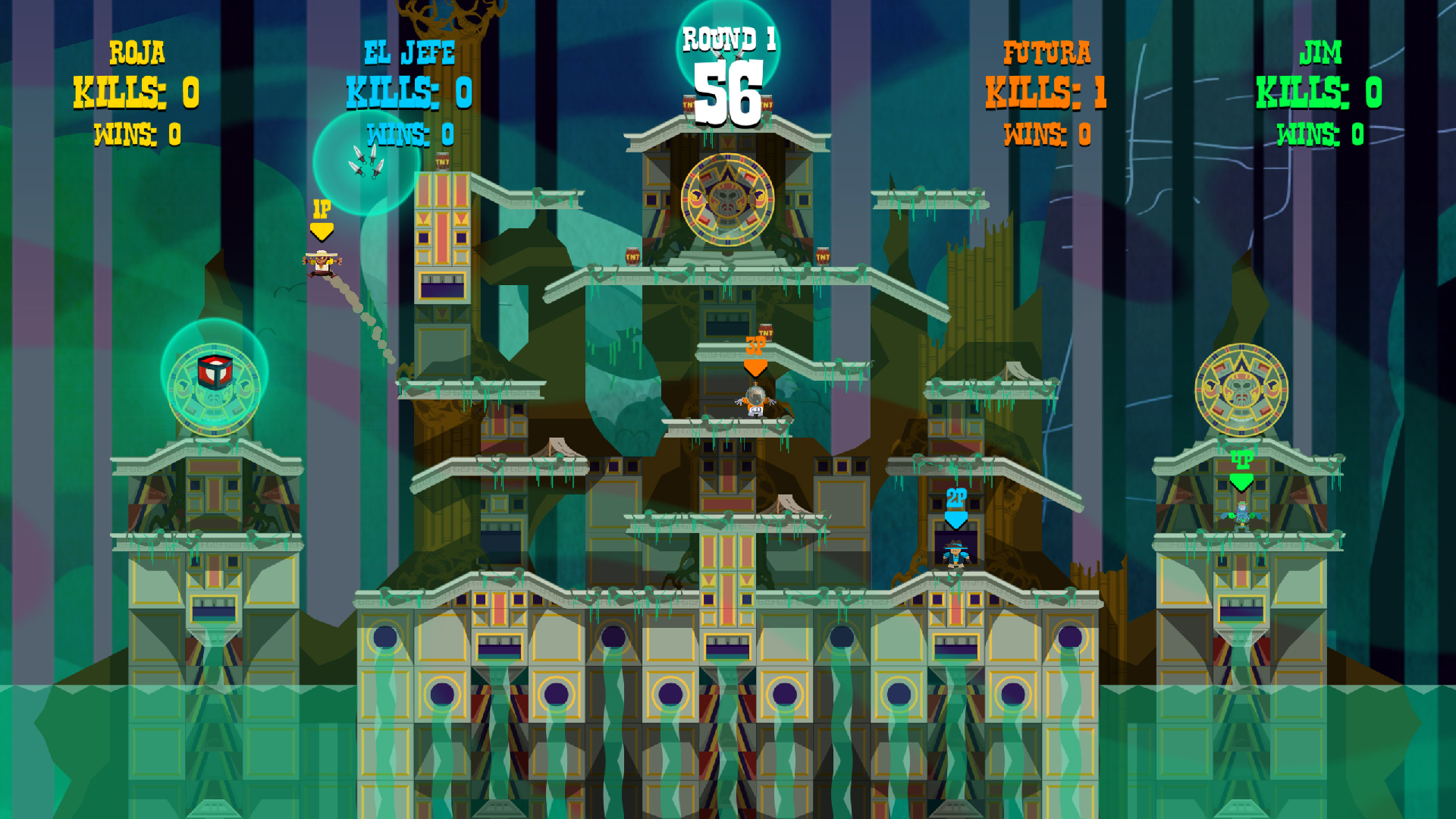 AAGG: Any particular level your favorite?

Nick: I don’t really have a favorite at this point. I’ve spent a lot of time on all of the stages, making them as good as they can be, and I’m always revising them based on player feedback. They all get the same amount of love.

AAGG: So I see there is a Deathmatch and Capture The Flag game mode. Those are pretty self-explanatory. But what about “Banditos” mode? What does that entail?

Nick: The goal in Banditos is to hold the golden monkey idol the longest. So basically, the idol spawns randomly somewhere on the stage, and players fight each other trying to get to it and then hold it for as long as they can while being chased by the other players.

There’s also Loot, which has the players running around to grab bags of money scattered around the stage, and capturing campsites that act as value multipliers for the bags of money. Whoever has the most money at the end of each round wins. 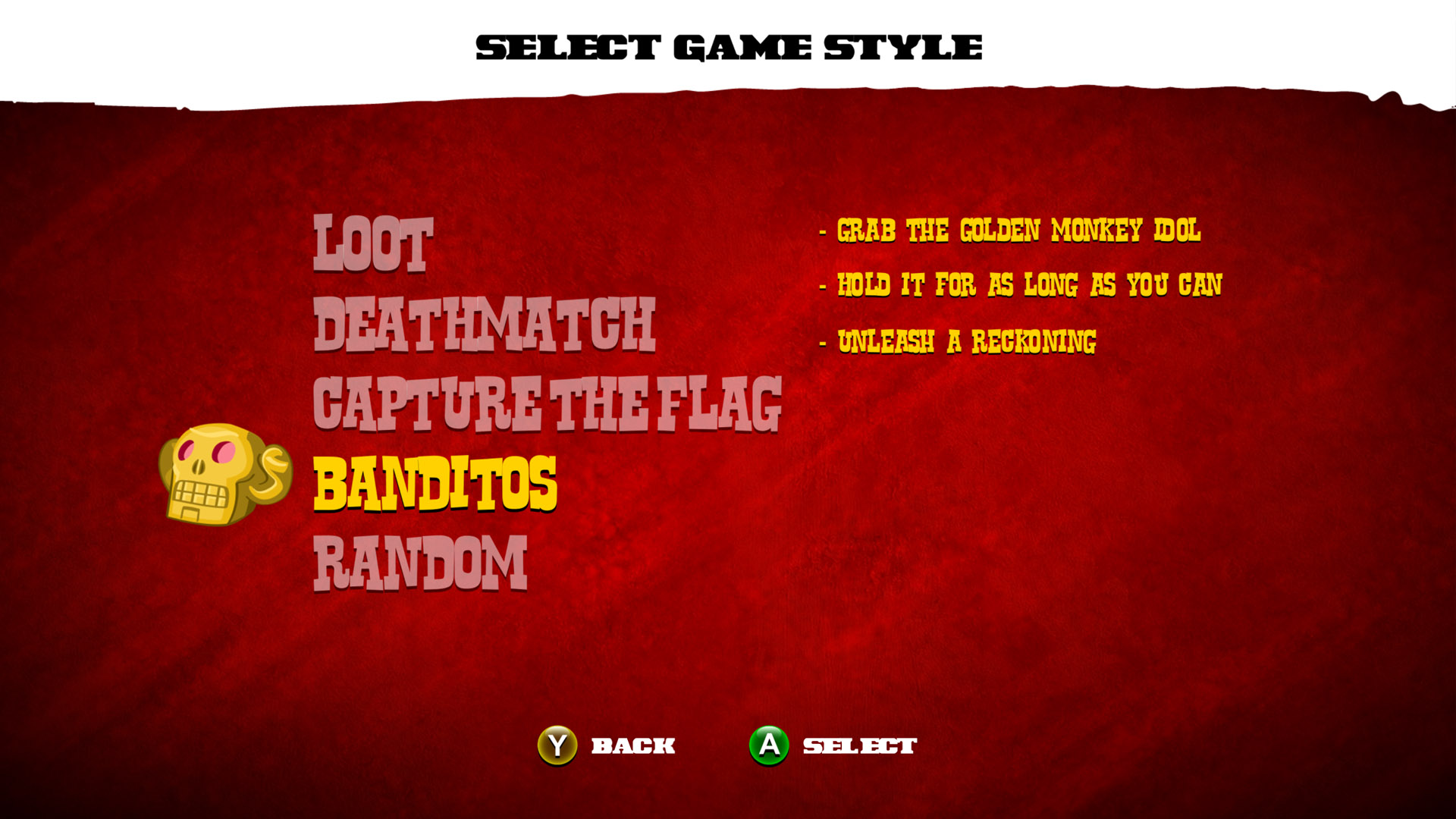 AAGG: According to the site you can play as a character from other indie games. How does that work?

Nick: I keep my eyes open when I’m at gaming events to see if any other indie developers are working on anything cool. We’re all pretty informal and often get to chatting, so it’s pretty easy to agree to trade characters for cross-promotion or just for the fun of it.

AAGG: Where did the name Pixel Metal come from?

Nick: I put together a list of random words and threw them into a random name generator. There’s not much more story behind it than that, though I’ve had a lot of people assume I’m a big metalhead or something because of it. Having long hair doesn’t help, so I’m partly to blame. 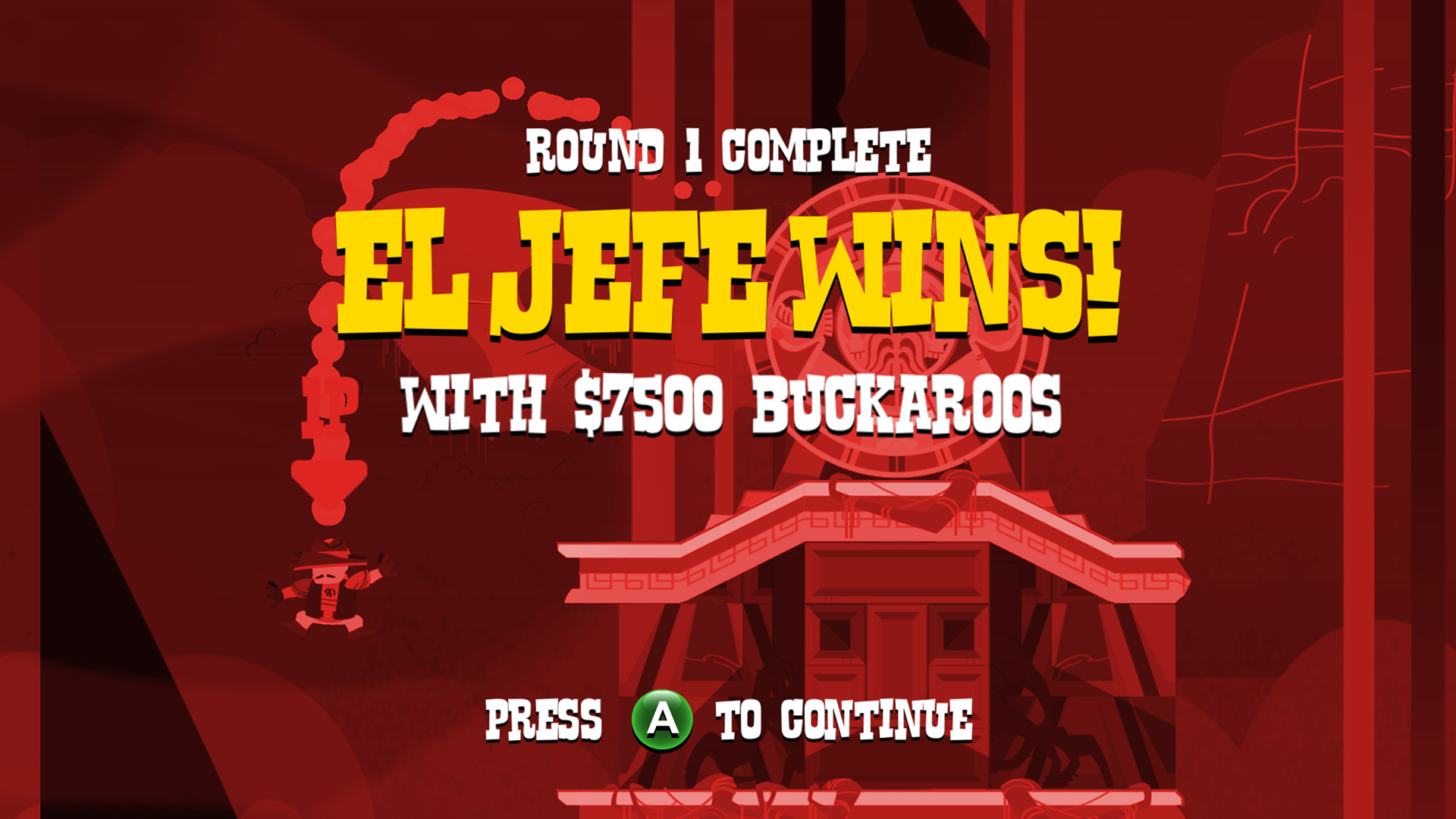 AAGG: What’s the release date and where can we find Sombrero when it drops?

Nick: The release date is a bit in flux at this point because of the previously-mentioned publisher talks. If that all goes as planned then the Windows, OSX & Steam OS releases will hit around the end of summer. Sombrero will definitely appear on Steam, and hopefully other digital PC storefronts as well. After that I’ll be working on adding additional content, including new stages, weapons and characters. A little free DLC never hurt anyone and helps to extend the life of the game, so I’m happy to do it. Console ports will also be moving into development shortly after the release of the PC version. What consoles and when is still to be determined, though XBox One seems like a no-brainer since it’s effectively running Windows 10 at this point.

ACTION A GO GO would like to thank Nick Robalik for taking the time to interview with us. You can check out more from Pixel Metal HERE. And if your thumbs are twitching for more quick draw, spaghetti western action then head on over to Sombrero’s official site at sombrerogame.com.