Dueling Movies: ACT OF VALOR (or CALL OF DUTY: NAVY SEALS) vs THE RAID : REDEMPTION

Derek ScarzellaApril 5, 2012
Movies1 Comment74 views
Where does reality stop and entertainment begin?
That’s the question I had to ask myself after watching two of the most completely different action movies to come out this year. I am referencing Act of Valor and THE RAID: REDEMPTION. Each has its good points, its bad points, and one is probably the best action movie I’ve seen this year (and may be the best one, depending on how AVENGERS/BATMAN/PROMETHEUS go). 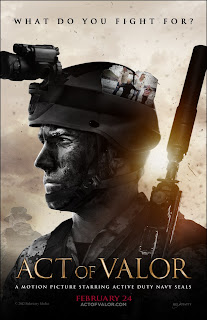 Let’s discuss ACT OF VALOR first. From the first time I saw the trailer I was buzzed. Real Navy Seals. Guns. Explosions. By the way, have you heard that this movie has active duty Navy Seals? That sounds like a recipe for success right there. So I waited, and waited, and finally I saw the movie. I was left impressed, but at the same time let disappointed. 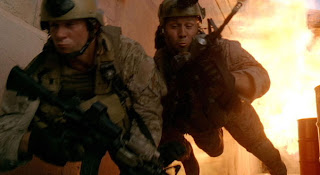 Let’s talk about the good bits. Military movies are a dime a dozen these days, but this movie manages to capture the sheer epic awesomeness of what our modern military is capable of. These guys are flying through the sky, riding battle ships, hoping on submarines, and everything else. I know MichaelBay shows this stuff all the time, but this movie somehow does it better even though it had a tenth (or twentieth?) of the budget.
Wherever these guys go it’s also head shot city. Seriously, it’s like that the only place Navy Seals shoot people. It’s scary.
The action was intense as well. It’s so intense that there are moments when it’s about what these guys DON’T do that impresses the hell out of you. Such as how they managed not too shoot each other when walking around blind corners. Stuff you normally don’t think of in an action movie, that’s where this movie surprises. 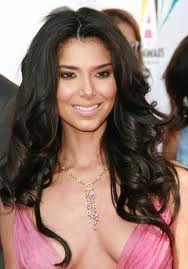 The acting from the villains and side characters also manages to surprise. Rosalyn Sanchez plays a doctor who is spying for the C.I.A and Nestor Serrano plays an agent who’s sent to protect her. Both bring some serious acting chops to the movie. The best performances come from the bad guys, however. Alex Veadov plays Christo, an arms dealing thug out to ensure that his criminal empire does not crumble under his feet. Interesting bit of trivia, he is also one of the voice actors for the CALL OF DUTY series of Video Games. No, really, check him out on IMDB. Jason Cottle plays Abu Shabal, a ruthless Muslim terrorist who will stop at nothing to create a horrendous act of terror that will bring the U.S economy to it’s knees. These two men give the best performances, by a long shot, and frankly end up being the best (maybe only?) dramatic part of the movie. 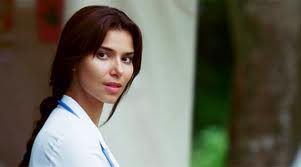 Oh my, a second Rosalyn Sanchez picture. Where did you come from?

After that, there isn’t to much too this movie, at all. Sure, these guys are bad ass and do incredible things that the average person can’t do. That’s great. Apparently, the only other thing these men talk about, ever, is there children. I mean, every five minutes it’s “hows my daughter, what about the baby on the way, blah blah blah”. I get it, these guys have families. I understand. But are there really talking about their families as soon as their done with mission debrief? Really? It made me long for the sexist, hysterical banter from that man movie classic PREDATOR (1987). Hell, Jesse Ventura was former NAVY SEAL and he acted like he cussed and hollered and…dare I say, acted. But that’s another conversation.
Also, it feels like a video game. From start to finish, it’s mission this and mission that. The first person viewpoint doesn’t help matters much, either. It even has cheesy cut scene animations. So, just to remind you where South America is we’re going to superimpose a giant map on the screen. Because nobody in the United States knows their @#%$ing geography.
Anyway, the movies not bad, it just isn’t great. Unlike THE RAID: REDEMPTION, which is the most intense action movie I’ve seen in a LONG time. 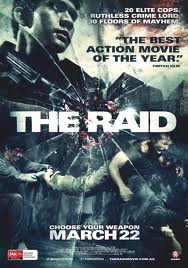 The movie opens up with the youngest officer, a rookie by the name of Rama (Iku Uwais). He wakes up, trains, and says his morning prayers. Finally he says good bye to his pregnant wife. Thankfully, the sentimentality stops there. Rama gets on a truck with 19 other officers going into battle and everything is explained and they all go into hell. 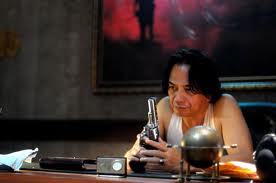 Hell in this instance is a 30 floor hotel that gives criminals safe housing for a price. Ray Sahetapy plays Tama, the crime lord that runs the place. He does an awesome job. Yayan Ruhian plays the unstoppable Mad Dog, Tama’s most lethal henchman and Doni Alamsyah plays Andi, Tama’s right hand man who runs everything when Tama isn’t shooting people or bashing their heads in with hammers.
So, the story is that simple. What ensues is just one incredible action sequence followed by another incredible action sequence. Full disclosure, I’m not a huge fan of modern day martial arts films. They’re too clean, to repetitive, and too absurd. This movie has totally changed that for me. The martial arts execution in this movie is flawless, shot clean, and above all you feel the grittiness of the action. I can’t tell you how long it’s been since I’ve heard an audience collectively go “OH” so many times for just one movie. The scenes were that damn good. 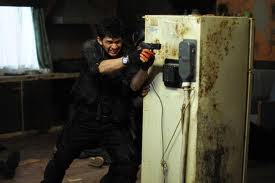 Gun play, knife fighting, machetes, fists, feet, and even refrigerators. This movie throws everything at you. Also, the sound track is pretty damn amazing. The cinematography is excellent. The editing is top notch. I’m running out of compliments here.
But is it perfect? No. It’s comically simple, the premise doesn’t make that much sense, and some things are just ridiculous. Besides those three general things, the movie plays by its own rules and delivers.
Which brings me to my final point. The Raid Redemption does not have “active duty Navy Seals” or bright shiny aircraft carriers or fancy graphics that show you where Europe is. No, it has none of these things. What it has is good guys, bad guys, and a whole lot of talent in between. And that’s enough. Act of Valor brought the real deal SEALS, lot’s of back story and fancy graphics and barely manages to excite as much as The Raid does.
Again, not to say it was bad. It manages to deliver the unexpected and the action is incredibly well done.  But it bogged itself down with gimmicks, and to me represents something dangerous. I have a feeling people looked at Call of Duty Modern Warfare and decided that that is a great premise for a movie. Why is that dangerous? It’s dangerous because it could lead to the oversimplification of action movies to the point where you really are watching nothing but explosions and gunfire and next to nothing else but clichés and stilted dialogue.
Now you could say the same thing about The Raid, but there is one huge difference between these two movies. Style. The Raid goes in your face, shows you how dirty life can be, and makes it a fun rollercoaster to the point that it makes people cheer. Act of Valor, for all of its “realness” comes off as a one and half hour long commercial for the military, which is not high praise.
Act of Valor
Stunts and Effects: 60%
Logic: 80%
Soundtrack: 30%
TNA: 30%
Cognitive Decline of Audience: 50%
Overall Inches on the Action Erection Scale: 7 out of 12
The Raid: Redemption
Stunts and Effects: 90%
Logic: 50%
Soundtrack: 90%
TNA: 10%
Cognitive Decline of Audience: 50%
Overall Inches on the Action Erection Scale: 11 out of 12