PROMETHEUS (2012) Can You Help Me Find My Space Monster? I Seem To Have Misplaced It. 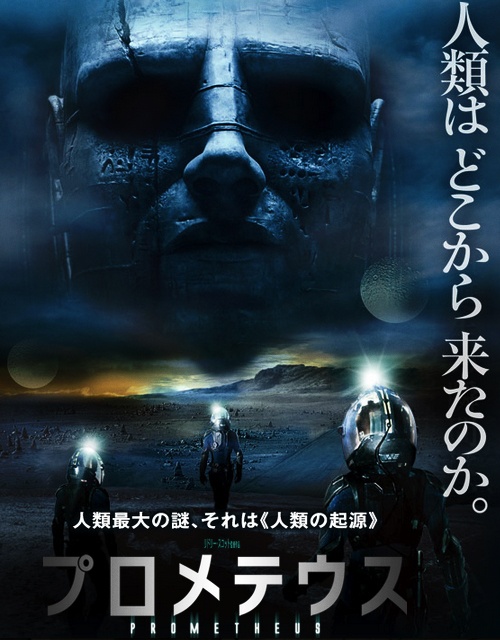 Directed by: Ridley Scott
Written By: Jon Spaihts and Damon Lindeloff
Starring: Noomi Rapace (Elizabeth Shaw), Michael Fassbender (David), Charleze Theron (Merideth Vickers), Idris Elba (Janek), Guy Peirce (Peter Wayland), and Logan  Marshall-Green (Charlie Holloway).
Few movies have had the impact that the original ALIEN had in 1979. The movie drips with style, had a breakthrough female lead, a truly unique (and terrifying) creature, overtly sexual overtones, and it’s all surrounded by the emptiness of space. It set sail to more sequels and tie ins that just about every franchise save Star Wars and Star Trek and represents a dark antithesis to those space opera epics that envision a future or galaxy far far away where different species can coexist and live in harmony. In this future the creatures are out to kill and violate you from the inside out.
But the one part of the movie that has made movie goers scratch their heads for decades has been this; who the hell was flying the space ship that these things were found on? Lovingly called the “Space Jockey” by the crew, it’s a minor set piece that almost didn’t make it into the film to begin with, but has since been the only clue to where the xenomorphs came from.
Flash forward 30 years and director Ridley Scott has decided to grace the world with some answers. It’s hard to believe that after 5 sequels (yes, I am including the AVP’s, cinematic excrement that they were) no one thought to dive into that realm of mystery. Why, you might ask? One reason would be that the mystery behind the ALIEN franchise is what makes it so terrifying. It’s a creature from the darkest part of space that violates you in the most horrible ways imaginable.  Adding any rhyme or reason to that, any back story, could basically make it less special, or worse, flat out not satisfy the same audience you are trying to please. Take a look at STAR WARS “prequels” to see how delving into your own cinematic mythos can horribly backfire.
So, Ridley wants to dip his toes in those ALIEN waters after 30 years. Who do you call for support? Damon Lindeloff of course! Jon Spaihts wrote it too, but he hasn’t been interviewed, so let’s just leave him to the side for now. The superstar writer of LOST did the rounds pretty hard, talking about how he doesn’t write stuff that “awnsers” any questions or some such. As a die hard ALIEN fan, that’s quit disconcering.
But the movies out now, and it’s time to find out where this movie stacks up compared the movies that came before (after?)  and what just might be down the pike. 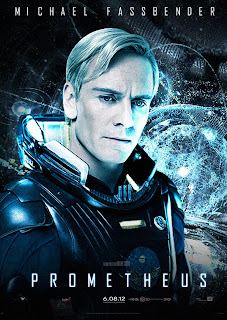 SOMETHING SPECIAL TO LOOK AT
Oh boy, the special effects. Have you seen special effects? Well, let me tell you, this movie takes Sci Fi special effects to a whole new level of beauty. I’d say not since CLOSE ENCOUNTERS OF THE THIRD KIND (1977) have special effects played such a wondrous role in a sci fi movie. Sure, AVATAR (2010) had such moments as well, but the alien tech in PROMETHEUS is so lustrous, so enchanting that it pretty much steals the show half the time. It doesn’t matter what is being accomplished in the scene, it’s just pretty and you can’t look away.
Never mind the fact that all the “alieny” stuff looks like it’s about to just out of the screen and impale/cut/slash/impregnate you. The creatures are fun, new, and slightly familiar. More on that later. 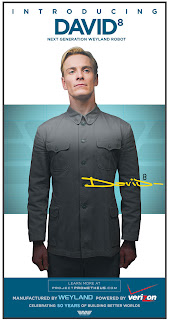 THOSE PEOPLE WHO GET PAID TO TALK
The cast is full of stunning talent. It’s literally too much to go over here. The standouts? Idris Elba, Charleze Theron, and Roomi Rapace. All so good, and all so believable.
The standout? Michael Fassbender as David, the lovable huggable android tasked with watching over the ship and guiding the mission along. The very beginning of the movie is dominated by him and it is truly fascinating. It’s brings to mind MOON (2009), a movie where Sam Rockwell carries the entire movie playing an Astronaut who meets himself while working on a lunar mining operation. With David, there is the same vibe. This entire film could’ve been about him, an android wandering through space looking for God, and it would have been incredibly interesting. But I digress; David steals the show, and will undoubtedly go down in movie history as another one of Sci Fi’s great android characters. 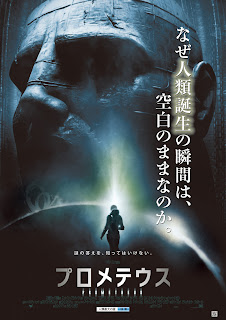 WHAT THE F&^$ IS GOING HERE?
What about the story? The first half the three fourths of the movie are absolute genius, It sucks you in and does not let go. We find out about the characters, we find out about the planet, and we maybe even learn about the aliens, and the engineers (or the “space jockey”) that created all of this wondrous stuff.
The last part? It sort of falls apart. Stuff happens. Lot’s of stuff. But are there answers? No. Is the pacing as taught as the original Alien? No. It’s a jumbled mess. Also, plot holes MILES wide start to show through and things start to get confusing. Not in the “wow this is so smart I need to figure this out” way. No, it’s the “what the hell is that bitch thinking?” sort of way. It’s a shame because up until this point, where things start to collapse, it’s a genius film that demands your attention. 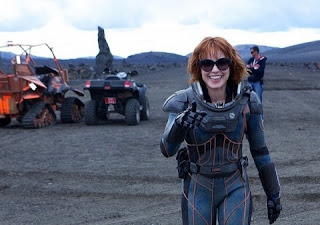 ANYTHING ELSE WRONG?
The make up could be better? It needs more aliens? Boobies? To be honest, this is an all around good movie that you should see, if you already haven’t. It will make you think and be glad movies like this are still being made. It will not give you answers. As a matter of fact, the best answers I got were through Twitter. THANKS TROY(AND DAMON LINDELOFF HIMSELF)
http://cavalorn.livejournal.com/584135.html
In this live journal blog there is actually more explained than in the actual movie, and it actually makes sense. However, it does make BIG extrapolations that are not explicitly in the movie. And even with this explanation, there are STILL big logic holes. And the ending is still a mess.
So go see it. And enjoy it. It is pretty. But not smart.
pps also read this because this is funny. SO FUNNY. Could not say it better myself.
http://m15m.livejournal.com/23209.html