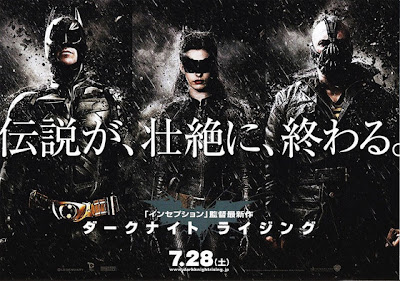 WARNING: THERE BE SPOILERS
It’s over. It’s done. It’s finished. It’s complete. The last Batman from the team of Chris Nolan and Christian Bale has been released and audiences around the world of flocked to see it. It beat the THE DARK KNIGHT’S gross (if you believe BOX OFFICE MOJO) and had a much larger budget, but those are just numbers. Where does this movie stack up against all the other BATMAN movies? Is it the best Nolan Batman film? Will it blend!?! All of these answers and more you will find below!
LET’S START OFF WITH THE PEOPLE WHO TALK 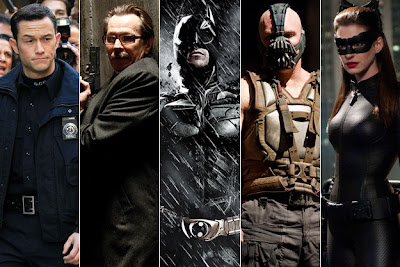 Christian Bale returns as the  Dark Knight. Marion Cotillard plays Miranda Tate, Morgan Freeman returns as Mr. Fox and Michael Cane is once again Alfred. Gary Oldman is again superb as Commissioner Gordon and Tom Hardy plays the ruthless, unstoppable Bane. The two most interesting additions to the series are Joseph Gordan-Levitt as Blake, a young idealistic cop out of place in a peaceful Gotham, and Anne Hathaway comes on as Selina Kyle, A.K.A Catwoman, A.K.A hottest villain ever. 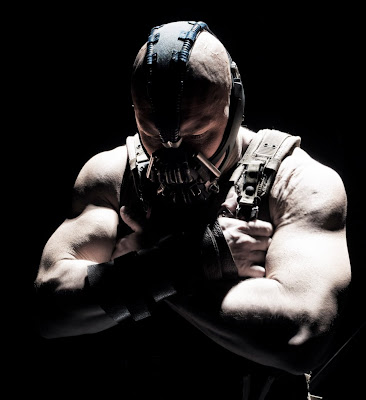 Long story short, they all do a good job. Tom Hardy is excellent. In my opinion he is one of the best actors out there getting consistent work and he is a pleasure to watch on screen. Even though he is in a mask, and his voice is (horribly) overdubbed a menacing performance comes across. There is one part where his eyes flare and that H.R Geiger like mask really pays off. But besides the mask he has some of the best lines in the movie. I found myself quoting lines like “Do you feel in control?” and “Your punishment must more severe” in his gravely blow horn voice. His flare, his manners (yes, manners) and unrelenting brutality weave themselves into a convincing and classy villain that is incredibly entertaining. 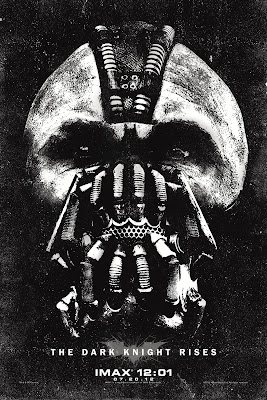 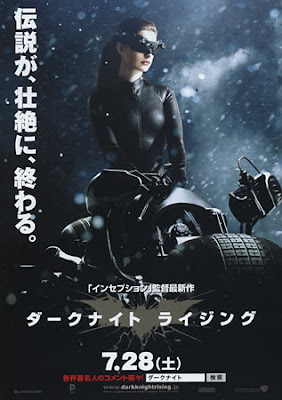 Catwoman is played well here by Anne Hathaway. I prefer the sex kitten Tim Burton style Catwoman, but Hathaway is excellent as always and brings a tough, modern take to the classic role. She also has plenty of smart tricks that make her an excellent foil to Batman himself, and isn’t afraid to snarl a bit in the thick of the action. 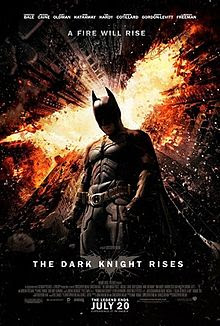 However, as it should have been throughout, we finally get to see more emotion from Christian Bale. He pulls off being old and weak, then poor and sullen. When he is broken we see the pain in his face. Also, when he is wearing the mask the Dark Knight has a pretty sharp wit as well. It’s refreshing, and it’s nice to feel like there’s more Batman in our Batman movies.
Marion Coultard is also a incredible addition to the cast and plays a pivotal, intense role and ends up making the movie. 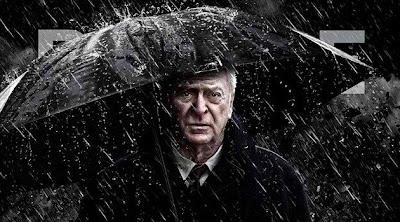 As I can wax lyrical about these players all day, Joseph Gordan Levitt also brings it, Gary Oldman brings some gravitas to Commissioner Gordan (again). One exchange between these two actors is so intense it is practically Shakespearean. But Michael Cain  as Alfred acts as the lynchpin for the whole series and is the emotional center of this movie. It’s a heartfelt performance that grounds everything and it’s no wonder that this is the fifth Nolan Movie straight that features Cain. He’s just amazing.
WHAT’S THE GOOD?

Basically, a lot of stuff. Now the THE DARK KNIGHT (2008) made some waves with its special effects. The Batpod they came up of with was an amazing engineering feet, really, and everything else in the picture was just…seamless. In this movie I can say they did the same, and stepped it up. You can’t tell where a special effect begins and ends, and this is exactly how it should be in every movie. When Batman’s new toy, the Bat, shows up it’s jaw dropping and that vehicle steals the show left and right. Its movements are natural and fluid. BTW, it’s totally not functional in real life, unlike the Tumbler or Batpod. It’s a shame, because I want one.
The tone throughout is spot on, and everything melds visually. We get to see a new side of Gothamthat is distinct from the previous two films. Also, the themes of this film are a bit more tangible. A bruhaha was made over the Occupy Wall Street movement going on while the movie was made and elements of that being roped in. Class warfare is a huge part of the movie, and is topical in our own lives now, but here it works well because it destabilizes everything and does what it can to put Catwoman and Batman on two very distinct sides of the fence. 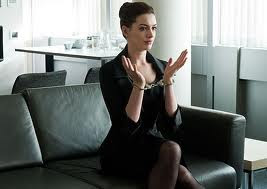 The set’s the movie takes place on are also epic. It’s a different world than BATMAN BEGINS (2005) and THE DARK KNIGHT (2008). In the first we were in the mountains, then slums. We spent time in the mansion where Batman discovers himself. In the second we spent nearly all of our time in the corridors of the city or apartments (albeit big ones) or the sparse modern Batcave. Here, we get to see the bowels of Gotham, which is fitting, because Bane and his budget League of Shadows is out to destroy the very foundations we see.  Conversely, we also fly to the towering heights thanks to the Bat and it’s aerial acrobatics. Also, the modern Batcave has some nifty visual tricks that are fitting of a true Batman.
The action was also incredibly well done. Brutal, fluid, and most important of all you get to see it. The chases, the shootouts, everything Bane does is great.
WHAT DOESN’T WORK? 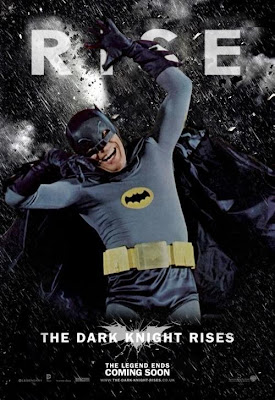 Unfortunately, a lot. None of it conspires to make the movie bad, it’s just not top level. It simply doesn’t soar! But let’s get to it.
First off, the movie is bloated. These are great actors, and the recipe is has all the right ingredients, but none of it is mixed well. The problems begin once the 2nd act kicks in and Batman has fallen. It begins one long montage that is meant to pack in Batman’s story in the pit, Bane’s rise and defiling Gotham, the Police rebellion, and Catwoman’s wandering around a fallen society. And it just doesn’t work. The editing just isn’t timed right, and the movie jumps when it should linger. Nothing sets in, and because of that the story is forced along instead of allowed to blossom. It’s surprising to me because it’s all very un-Nolan.
THE GAME HAS CHANGED (OR THE AVENGERS HAS CHANGED THE GAME)
The success of the Nolan Batman films was attributed to their (sometimes) brutal realism and the shunning of “comic book” aspects like flamboyant costumes or monster creatures. This brings me to my next point. The other aspect of the movie that doesn’t work is the scale. I’ll come out and say…THE AVENGERS (2012) has changed the game. To be honest, pretty much all of the MARVEL movies have moved things forward, but in short THE DARK KNIGHT RISES just doesn’t feel all that “epic”, or what is supposed to be epic about it falls flat. A lot of cops running down a street just isn’t all that impressive compared to an alien invasion with flying space ship war snakes.
If this movie had come out in a vacuum, it might have been the end all be all of super hero movies, but it is not. If it was cut back to something just over the grandeur of THE DARK KNIGHT this might have been an absolute home run, but for Action A Go Go it is not.
THE FINAL COUNTDOWN…and the SPOILER PART
The ending is good. Convoluted, but good. The Talia Al Goul reveal at the end caught me by surprise (But really didn’t need to be there), as well as throwing the pseudo Robin curve ball. That was pleasant. But what really caught my heart, as a fan boy, was seeing that Batman makes off with Catwoman at the end. Alfred gets to see the boy he put his heart into raising finally move on with his life. There is no did he or didn’t he bullsh** like in INCEPTION (2010). It just ends. I hope that other series aren’t afraid to do the same, or at least do something like it before the next reboot. What this movie did was surprisingly unique and possibly the most surprising part of the movie.
AND THAT’S IT…
So go see it. It’s a great movie. And see it in IMAX. It was shot in that format, and that format is probably the only way you should any Nolan movie. 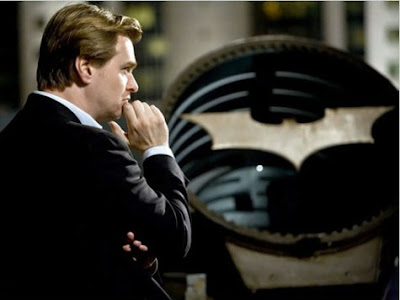 It’s not the greatest Batman movie ever made. But it is great, and it is an achievement, and it is a great end to an awesome trilogy. It helped bring back superhero movies for us all. Nolan and Bale and all the other participants should be celebrated for their contributions to cinema and the Batman legacy and for giving us all what we want, quality movies with Comic Book heroes beating the crap out of bad guys.
P.S
Where does this movie fit in our all time greatest BATMAN movie list? That will be edited soon. Where do you think it should fit? Feel free to comment below…we feel like arguing…