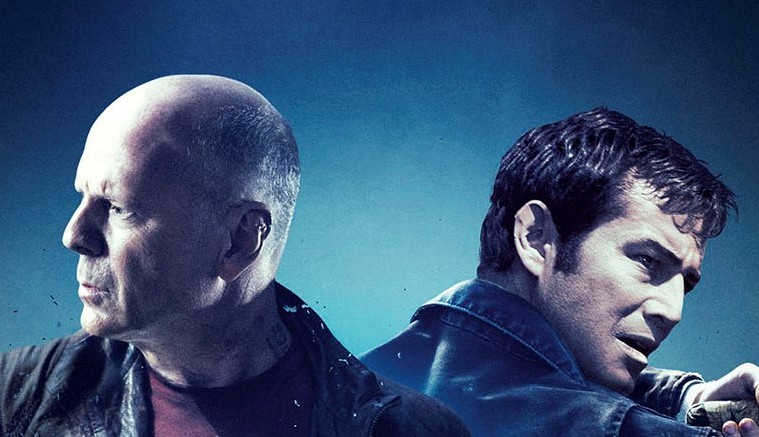 Derek ScarzellaOctober 2, 2012
Movies0 Comments40 views
LOOPER (Directed by Rain Johnson, 2012) is not what you are expecting. It’s not what the previews tell you it is. And that is a very good thing. This movie takes deliberate wrong turns and messes with expectations in the best ways possible and is the best at doing that since another movie starring Joseph Gorden-Levitt came out. That film was INCEPTION (2010) directed by Christopher Nolan.
This time he’s starring, and he does a great job of carrying the movie.
He plays Joe, a former street rat turned specialized assassin going about his business in the year 2044. 30 years in the future (2072) they invent time travel but it is immediately outlawed and only used by criminal organizations to transport victims to the past because it is impossible to dispose of a body in 2072 without law enforcement catching on. So loopers basically wait for victims to show up, shoot them, and dispose of the body. When they have done enough they (unknowingly) kill their future selves and enjoy 30 years of retirement. This get’s turned on its head when future Joe outwits young Joe and goes on a rampage to stop “The Rainmaker”, a future super criminal taking everything over.
There’s a lot more too it than that. Trust me, there’s a bunch of reasons you should go see this movie.
WHAT’S ACTION A GO GO…
Joseph Gordon-Levitt has been on a rampage these passed few years. Beginning with INCEPTION and culminating in this years THE DARK KNIGHT RISES and LOOPER (We’ll ignore PREMIUM RUSH…for now) this guy is becoming one of Hollywood’s go to action personalities. And it’s great. He gives a magnificent performance and carries two acts of the movie all by his lonesome. But this brings us to the rest of the cast. 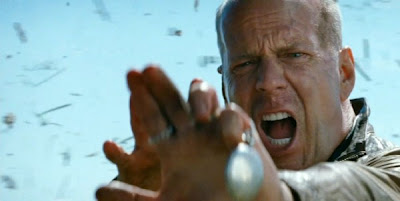 If Levitt carries it, Bruce Willis as old Joe shines. There are scenes in this movie where he brings such emotional intensity and bravura to this role that a big ole OSCAR bell went off in my head. There’s a fat chance of that happening but Willis is getting better with age, much better, and he gives an amazing performance that solidifies this movie as one of the best of the year.
Never mind that the rest of the supporting cast is top notch. Jeff Daniels, fresh off the critical acclaim bus with NEWSROOM, steps out of his wheelhouse and plays and excellent future gangster in Abe. Emily Blunt is great as Sara, as well as Paul Dano as another looper named Seth. It all adds up to a collage of talent that LOOPER benefits greatly from.
The Sci-fi elements are as mind bending as the concept and create a movie that keeps you guessing throughout. And that’s the movies secret weapon. Just when you think you know what’s going on and who to root for it makes you second guess yourself and makes you questions what a good guy is in the first place. This happens on both a physical level and emotional. Physically, for example, characters can leave scars on themselves that tell their future selves where to go, or when to keep an appointment. It’s as freaky as it sounds, and the concept is taken farther than you can believe. 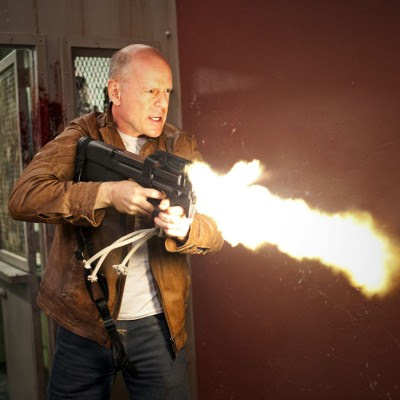 On an emotional level these characters are trying to hold onto things, or people, and what they do to keep time the way they it was or change an outcome can be driven by love, greed, or hate depending on who is pulling the trigger. It’s simply mind bending. 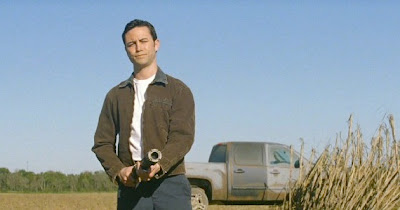 Last but not least this movie benefits from a hard R rating and excellent action. The action in this film is intense and serves the movie well. It has a deliberate western feel, with revolvers and shotguns featured. These can be slow but pack a powerful punch. Of course other future weapons show up but this stylistic choice affects the tone of the movie and actually slows the pace at just the right times. And it’s brutal. Oh so brutal.
It’s top notch stuff that will give you more than you bargained for. Hat’s off to Rain Johnson(THE BROTHERS BLOOM (2008), BRICK (2005)) to a movie well done.
WHAT’S ACTION A NO NO….
Well…this one’s going to be little thin…
This is a great movie, but there are some problems. Every movie featuring time travel raises the same questions, from THE TERMINATOR(1984)  to TIMECOP (1994). How does anybody go back in time and change ANYTHING and get the desired outcome?
Of course LOOPER plays with this, but ultimately you’ll be scratching your head and second guessing the plot. I had one huge problem from the get go. (POSSIBLE SPOILER) If these guys immediately kill whoever shows up and don’t know who they are AND get rid of the body, why do they need to die in 30 years? They have no info and can’t be traced by the cops. What’s the point? (END OF POSSIBLE SPOILER).
Anyway, stuff like that, and worse, show’s up that undermine the experience. But that’s it really. Besides that the movie is an excellent experience all around that lacks flaws.
THE VERDICT…
Go see it. Some people have touted it as “action Sci fi” of the decade, but I wouldn’t go that far. At least not yet.  Nevertheless, it’s great, I enjoyed it, and will see it again. And here at ACTION A GO GO that is the highest praise we can give.