Why Did I Watch ‘Double Dragon?’ A Forgotten Video Game Disaster From The 90s Returns

Whenever a new Resident Evil movie comes out (or March’s Need for Speed), the online film community loves to start a conversation about the history of video game films and why they seem to almost never work.  However, when listing the worst of the batch, Uwe Boll flicks get all the “love”.  Personally, I’d seen a few random minutes of Double Dragon on television a few years back and it looked, well… interesting.  Was curious to see how it stacked up in the least respected subgenre of film.

Another reason to watch this… check out this ridiculous trailer using an embarrassing electronica remix of Carl Orff’s O Fortuna:

Trust me, that looks way cooler than the movie actually is.

You can’t rent the dvd on Netflix, but you can stream it.  Watched on a lazy Sunday afternoon on the couch.

It seems weird that after the critical and financial failure of Super Mario Bros. that anyone in Hollywood would be interested in making another realistic, urban version of an even less popular video game.  Did they think the lower budget would help it turn a profit by default? 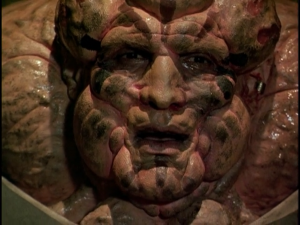 Double Dragon makes all the same mistakes as Super Mario Bros., but without the weird originality that makes that one (barely) watchable.  Hell, at least the mess that is Street Fighter was campy and cartoonish.  Like Mario, the CGI effects in Double Dragon are laughable and the practical make-up isn’t really that much better.  Particularly, Bo Abobo, who undergoes extreme experiments to augment his strength, looks like a silly putty affront to humanity.  He’s one of the many villains who gets the over-the-top make-up treatment, including a zombie basketball player, a guy with a plate in his head, and the lead villain who turns into a monster during the climax for reasons that don’t even fit the logic of the movie.  Abobo’s character is mostly played for laughs, as-is pretty much the rest of the movie.

After a prologue about some magic medallion that was cut in two, the movie introduces us to brothers Jimmy (Mark Dacascos) and Billy (Scott Wolf) Lee fighting in an underground tournament.  Since Scott Wolf’s not Asian, I’m assuming they’re half/step/adopted brothers.   Evil businessman, Koga Shuko (an also suspiciously non-Asian Robert Patrick) has the half of the medallion that has power over the Soul, which means he turns into a poorly rendered CG shadow who can possess people.  The Lee brothers’ maternal figure, Satori Imada (actual Asian Julia Nickson), has the half that has power over the Body, rendering one invincible.  If one has both, they become all-powerful.  Conflict ensues. 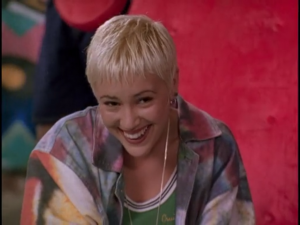 In the meantime, Alyssa Milano plays the leader of Power Corps, a terrorist organization whose goal is to release the stranglehold that gangs have over the city.  At one point, she’s fighting Linda Lash (Kristina Wagner of General Hospital fame) in a battle of unimportant tv stars.  Wagner gets a hit off and winkingly remarks “Now who’s the boss?”  Later, Milano counters with “You’re lucky.  Generally I put people in the hospital.”  If you cringed while reading that, imagine watching it.

As mentioned above, it is quickly established that futuristic 2007 Los Angeles is full of gang violence, resulting in a curfew at sundown.  Now this is important later, because we eventually learn that the curfew is part of a deal between law enforcement and the gangs: If they don’t bother people in the daytime, the police won’t bust them in the night time.  This is something that Shuko quickly exploits as he gains power over the gangs in a bid to take over the city.  Now, this brings up a few questions: What do the gangs do at night when every other citizen is locked inside for curfew?  What’s the point of being a gang member if there are no civilians to mug or sell drugs to?  It seems that they just wait around for people who aren’t paying attention to curfew and then they charge a toll or otherwise mess with them.  However, as far as we can tell, everybody’s so afraid of curfew that there aren’t a whole lot of people around to hassle.  C’est la vie.  When it comes to a movie like this, if you’re putting more thought into logistics than the screenwriters did, you’re probably doing it wrong. 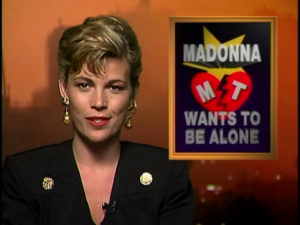 The future itself is a day-glo dystopia where everyone has to worry about extreme violence and pollution, but carefree tourists go on ferry tours of the now flooded Hollywood Boulevard.   The dichotomy doesn’t quite work, but points should be given for a solid attempt at creating a new, somewhat unique world where these video game characters and actions can exist against one another.

There is an attempt at some social satire a la Robocop (a few short news segments hosted by George Hamilton, Vanna White, and Andy Dick seem especially egregious), giving background to the political climate of the futuristic 2007 while making joke-y comments about acid rain and celebrities.  As hamfisted as those moments are, more subtle hints of a futuristic society are sprinkled liberally through the film without comment.  Characters approach a phone booth that actually provides fresh oxygen to refresh breathing in the polluted air.  Employees clock into their office by touching a glowing orb.  Virtual Reality interfaces are abundant.  Double Dragon does a solid job of showing an environment that is consistently otherworldly-looking while maintaining a heavy feel of familiarity.

I am actually going to give the movie props for adherence to the source material.  The game is about two brothers who run around the city getting into fights with gangs and that’s what happens here.  As it should be, Linda Lash has a whip and Bo Abobo is appropriately large.  It may seem like a gimmie since Double Dragon isn’t really a game known for its story.  However, compared to pretty much every video game adaptation that isn’t called Mortal Kombat, the bare bones adaptation is almost relevatory.

I got into it a bit above, but let’s recap: The Lee brothers’ father was killed by Koga Shuko (who changed his name from Geitzman for some reason) while on an archaeological expedition for a magic medallion.  In a bid to finally get said medallion, Koga Shuko has reinvented himself as a ruthless businessman with ties to the gangs who rule the night.  The organization committed to taking back the city from these gangs is run by the police chief’s daughter (unbeknownst to him).  Meanwhile, the Lee brothers try to get by via martial arts tournaments which have made them semi-famous.  That’s the plot.  Very little of this is straight up spelled out.  The movie really just throws you into this futuristic world of characters, giving bits of information that add up to a whole story. 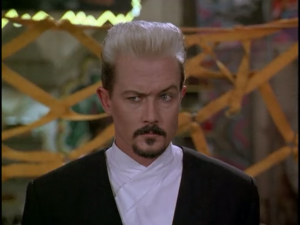 Again, this might seem basic, but it’s refreshing to see a shitty sci-fi action that doesn’t waste the first 30 seconds on an opening crawl or clunky expository dialogue to get an unengaged audience up to speed.  The mythology of this strange world is clear and concise in a storytelling technique that shows instead of tells.

But all that is secondary to Robert Patrick’s scenery chewing performance.  Fantastical movies like this aimed at young audiences tend to have really out there villains played by character actors that seem excited to do whatever they want onscreen.  Think Angus Macfadyen in Warriors of Virtue (a “What Did I Watch This?” candidate if I ever got the patience to rewatch it), Thomas Wilson in the Back to the Future trilogy, and Alan Cumming in Spy Kids.  Robert Patrick is no different, except he’s even slightly more restrained than these examples.  He doesn’t scream and go batshit insane like typical over-the-top performances.  He just acts pretty damn cool and struts around like he owns the whole movie (which he basically does).  The performance is campy without devolving into parody and definitely something that stands out.

The action in general was just plain weak.  Mark Dacascos is a martial arts champion who gets about two scenes to show off his prowess in clumsily choreographed fight scenes.  There’s an all too short fight with a bo staff that is really the only thing in the movie that would let the audience know that he had any background in kung fu.  His actual ability is consistently interrupted by Scott Wolf’s shenanigans as a goofy cut-up who defeats villains by jumping on their back and making Three Stooges sounds or tricking them into stepping and slipping on gumballs. 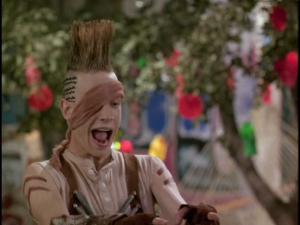 Even the perpetually kooky Teenage Mutant Ninja Turtles movies attempt to make a point that the turtles could reasonably beat-up the Foot, while being able to do so in a way that was fun for kids.

It’s not just the fights either, it’s all the action.  There’s a 5 minute chase scene where less than 1:45 is actually spent outside the vehicles.  And even then, they only touch each other once and occasionally drive into a stack of empty cardboard boxes.  The rest of the scene is a bunch of incredibly stilted dialogue while the guy from the Weird Science tv show mugs for the camera.  There’s even a few unnecessarily long sequences of the cars racing on a dashboard video display that looks vaguely like some ColecoVision version of Grand Theft Auto.  Similarly, a jet ski chase in front of a matte painting involves little to no immediate conflict.  It’s just one vehicle following another vehicle at a kind of fast speed.

Otherwise, everything’s just plain too goofy.  The humor feels exceptionally awkward, especially when the movie tries to make some attempt to deal with death and destruction.  One scene involving a morgue-like room where gruesome experiments are being conducted results in Milano’s character screaming loudly when she sees a specimen.  Scott Wolf’s reply: “Hey, a scream like that will wake the dead!  Get it?!  Wake the dead!” 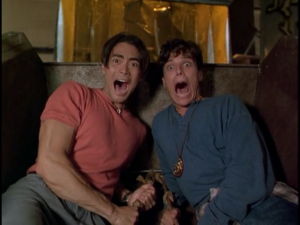 No Scott, I don’t get it.  Saying a common phrase in a room full of dead people isn’t a pun and it isn’t ironic.  You are just saying the phrase in a slightly more context-appropriate environment.

When in danger the Lee brothers just kinda scream at the camera and gawk for several beats, which takes away any sense of urgency.  The fact that each scene feels like it starts a couple seconds too early and ends a couple seconds too late doesn’t help the stilted acting or unnerving pace of the film either.  You know how when you watch a deleted scene or blooper that takes place at a concert or party and it just seems that much more artificial due to lack of sound design and unrefined editing?  Double Dragon feels like that for nearly the whole running time.

Not particularly. Robert Patrick is a beast in this and I guess there’s something to be said about the bubble gum “grittiness” of the world they create (think Stallone’s Judge Dredd with half the budget).  But unless you’re a video game franchise completist, it’s not really worth a look.  I liked the Streets of Rage games better anyway.

All images courtesy of Imperial Entertainment