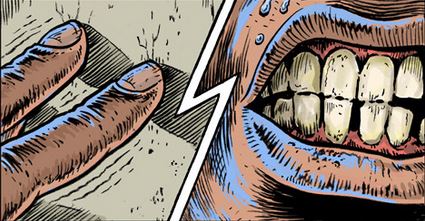 If you haven’t heard by now, last Tuesday a Senate Intelligence Committee revealed that the CIA “wrongfully” detained and subsequently tortured over 20 individuals during the war on terrorism. Which means that these “enhanced interrogation tactics” are being brought to light years after being denied by top White House officials. Moreover, it paints a picture of the Central Intelligence Agency going rogue — providing inaccurate information to the public and openly violating the human rights of numerous individuals.

Over at Vice, artist Krent Able and writer Oscar Rickett have provided a simplified, A to Z explanation of the CIA’s various torture techniques based on the 6,000 page report. I’ve included some of the more “work safe” samples below but I definitely suggest checking out the whole thing at Vice.com.

Needless to say, despite the cartoon style of Krent Able’s work, some of the images are not NSFW.