‘NO ESCAPE’ : BEING CRITICAL AND BEING OBJECTIVE

The discussion surrounding art critics writing critically while still maintaining objectivity is an old debate. Some writers are under the impression that it is not possible to do both, however, showing equitableness in a review is not new…it’s just new in this Internet age. Amidst the Gawker hit pieces and the hair-on-fire approach of network news, it is easy to forget that there are journalist and critics who pride themselves on objectivity.

WaPo’s Stephanie Merry seems to adhere to that objective philosophy. Recently, she wrote a review of the film No Escape, the Owen Wilson/Lake Bell thriller about American tourist caught in the middle of a Southeast Asian war zone.

Even from the trailers No Escape looked like it suffered from a surprising amount of xenophobia. The kind that would’ve been comfortable in a John Milius movie 30 years ago, but comes off as just antiquated and embarrassingly fearful of anything “other.”

The filmmakers behind “No Escape” seem to have had one goal in mind: to make a thriller suspenseful enough to elicit gasps from a (presumably) white-knuckled audience. Mission accomplished. But in their pursuit of thrills, the creators’ single-minded focus may have blinded them to one little problem about the film. They present the Southeast Asia country in which the film is set as little more than a dangerous hotbed of machete-wielding savages.

It’s a classy review. The kind that skillfully sidesteps the frequently fudged line between op-ed and criticism. Merry gives the creators the benefit of the doubt, she addresses the race issue without demonizing everyone involved in the project, and, above all else, she doesn’t gloss over facts in an effort to make you agree with her. If anything, she sees the film’s flaws as problematic but ultimately leaves it up to the person reading her review to decide. Basically, the cornerstone of any professional review. In my opinion.

You can read Stephanie’s review in its entirety by clicking on the frightened faces of Pierce Brosnan and Owen Wilson below. 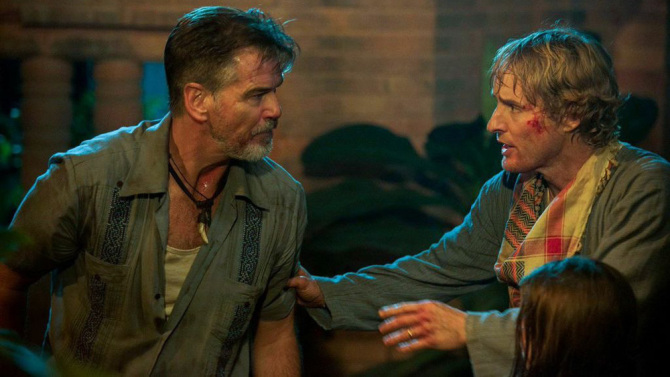