DIE HARD WITH A VENGEANCE: RACE POLITICS AND RAMBLINGS

It’s 1995, nearly 7 years after the original Die Hard and 5 years after its sequel. Stuck in Hollywood’s endless development cycle, Simon Says, an original screenplay by Jonathan Hensleigh, finally found a home with John McClane. Before that, the script had been bounced from franchise to franchise, being pushed as both a possible Lethal Weapon sequel or the follow-up to 1994’s Speed. 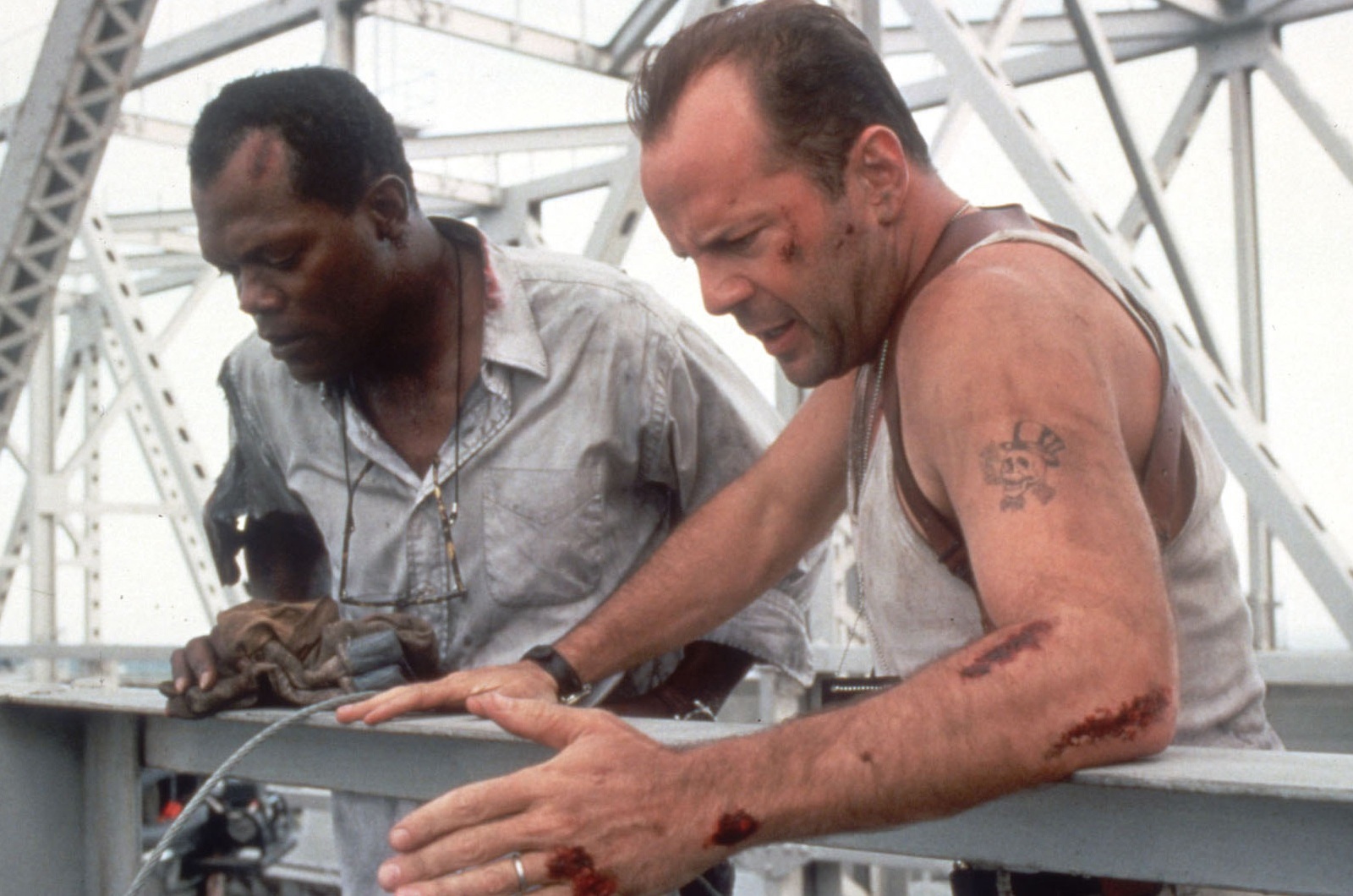 Spinning the unintended into a Die Hard script isn’t anything new. But even better, this production had wooed back John McTiernan, the original’s director and, quite possibly, the only man who TRULY understands what made Die Hard tick.

In a plot that could have only existed in a pre-9/11 world, the entire city of New York gets caught in the middle of an elaborate game of cat-and-mouse. The cat in this scenario is “Simon,” a mad bomber who seems to have a hard-on for detective John McClane (the mouse). After forcing the NYPD to pull McClane out of his drunken stupor, Simon makes John scramble throughout the city, daring the detective to solve a series of riddles before the next explosive goes off.

And that’s when the *SPOILERS* kick in: Turns out that Simon is the brother of Hans Gruber, the terrorist mastermind from the original film who met pavement because of McClane’s exuberance.

Is this simply an act of a revenge? An excuse to restore family honor? Of course not. Simon is a Gruber after all…

Bruce Willis has played John McClane five times, but this John McClane is a bit more insane than all the others. Truth be told, it’s an inherent character flaw that lies underneath the surface of the better Die Hards (the second film just makes him seem like a smug asshole and the fourth film makes McClane sound like a bitter old man). Here Bruce Willis plays him like a schlub on the brink of personal disaster and, quite honestly, I like this version of McClane more than the others. 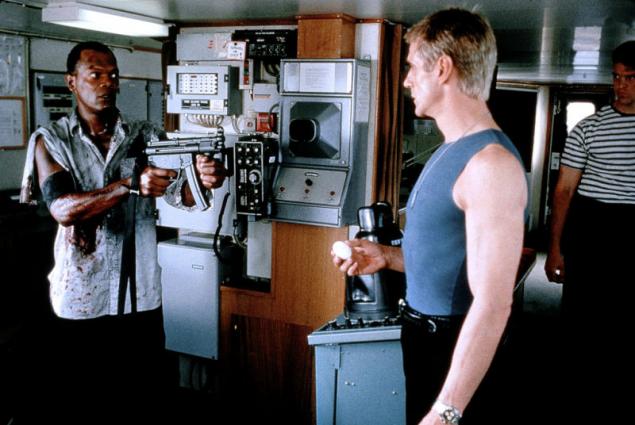 Feeding off McClane’s silent plea for help is Samuel L. Jackson, the acting equivalent of a livewire. Jackson plays a locksmith from Harlem who gets swept in Simon’s nonsense. In classic buddy movie fashion, he’s forced to run around NYC with McClane and serve as the voice of reason…even when he says and does some pretty irrational things (more on that later).

This actually marks the first time these Willis and Jackson have been on-screen together but the third time they been in the same film. That comes as a bit of a surprise seeing how well they feed off each other. As we would later experience with mixed results in the coming years, the dynamic between these two was too good not to try and replicate.

Then there is Jeremy Irons as Simon. Yes, Irons is classically-trained, but more importantly, he is the only actor on this planet assured and cunning enough to be Alan Rickman’s “brother.” Endlessly impressive, Irons makes every line of exposition sound like The Immortal Bard (oooh…Shakespeare reference). In an action film, that is no easy feat. 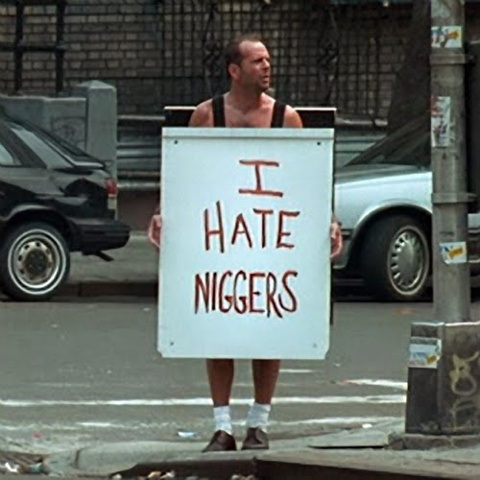 I still contest that only John McTiernan understood what made the first Die Hard so great. People claim that it’s Willis (then how do you explain Live Free Die Hard), and some will claim that it’s the trapped-inside-a-building concept (a theory that holds no weight because of this film), but the fact of the matter is that director John McTiernan remains indispensable to this series.

The way McTiernan combines cinema veritae (oh…french words!) with big budget visuals — the way he allows actors to bring personality to every minor character role — the way he dodges every cliche by manipulating the audiences’ sense of urgency — this film is truly a unique example of technical genius propelling a story.

I can only be so concerned about DHWAV‘s somewhat casual use of the n-word. Still, in the wake of the more recent Django Unchained controversy it’s interesting to compare the two Sam Jackson movies.

If anything, DHWAV is slightly more offensive than Django Unchained because it uses the word purely to manipulate the viewer. The story insists that Willis and Jackson bicker about race throughout the film, even going as far as having Jackson accuse Willis of dropping an N-bomb. Despite this painfully consistent thread, it’s pretty obvious that the film has absolutely no interest in actually addressing the topic, making the inclusion of racial epithet woefully inappropriate for escapist fare.

My best assumption is that because of the movie’s proximity to the LA Riots and the OJ Simpson case a lot of what was going on during the early-90s had worked its way into the script. In that regard, it’s kind of ballsy, harkening back to the bygone era of 70s cinema when blockbusters weren’t as shy to acknowledge the zeitgeist.

It’s 2015, nearly 27 years after the original Die Hard and 18 years after With a Vengeance. Two sequels later (with another around the corner) and the third movie is still the best conceivable ending to the franchise.

Like most third installments, DHWAV brings the hero’s three film journey to a circular completion, ending with John McClane heading to a payphone to reconcile with his wife. It’s the only fitting end to the bullheaded cop fromNew York: He saves the day but barely saves his marriage. As if McClane and Holly are part of some cycle that can only start again with a phone call and a reluctant flight to Nakatomi Plaza.

In addition, because DHWAV wasn’t originally intended to be a Die Hard film, it skips over all the egregious winks and nods that most third installments make. Holly, Sgt. Al Powell and the other key players from the previous movies don’t make their obligatory appearances. We’re introduced to a whole new set of personalities that have heard of McClane’s exploits but, in a refreshing change of pace, none of them are impressed by the actual man himself.

Then there is Simon. Outside of McClane (who, of course, is expected to be there) he is the narrative’s one true link to the original movie. Just when the film seems on the brink of exhaustion, Simon makes his first physical appearance and the movie subtlety shifts gears. Screenwriter Jonathan Hensleigh made a very clever script without the Die Hard elements, but once the movie reveals that Simon is Hans Gruber’s brother it becomes a film that amplifies the original Die Hard, shames Die Hard 2, and becomes an action classic in its own right.