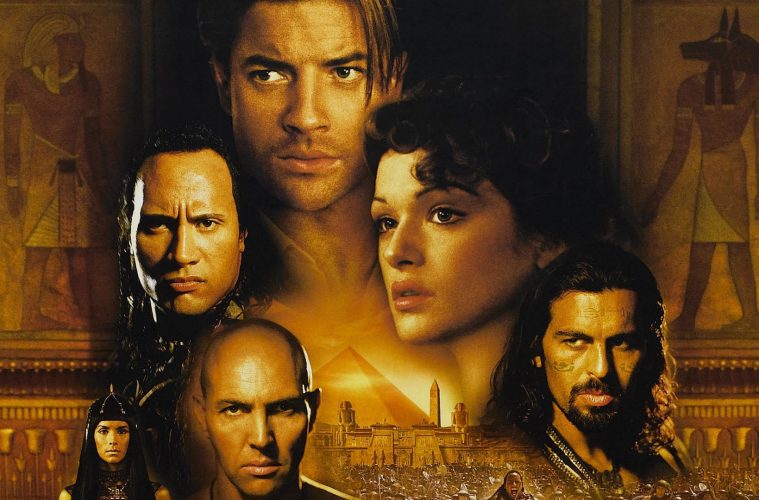 Paul BerneyJune 15, 2017
Culture0 Comments68 views
Following on from 1999’s smash hit blockbuster ‘The Mummy’, director Stephen Sommers reunited with Brendan Fraser, Rachel Weisz, John Hannah and Arnold Vosloo for ‘The Mummy Returns’. With bigger action, more laughs and a very complicated plot, ‘The Mummy Returns’ divided audiences. For me, it’s even greater than the previous adventure.
https://www.youtube.com/watch?v=3yXjs7BUKYc
Ten years after the events of ‘The Mummy’, Rick and Evie have settled into a peaceful life in London, with their son Alex (Played brilliantly by Freddie Boath) and their many riches. But when they discover the bracelet of Anubis during a dig, their son attaches it to his wrist, giving him visions that lead him to Ahm Shere. His parents are forced back into action to save their son, when an army of mummies are brought back to life by the returning Imotep. With seven days to get their son to Ahm Shere before the bracelet kills him, they encounter the dastardly Scorpion King and are forced to seek Imotep’s help in bringing down this ancient evil. The Rock (Dwayne Johnson) takes on his first movie role, and even though he’s underused, and Scorpion King suffers from lackluster CGI, he brings a lot of entertainment to the story. The spin-off movie ‘The Scorpion King’ became The Rock’s first movie as a leading star.
https://www.youtube.com/watch?v=4PE5ZB5bIkg
‘The Mummy Returns’ is packed with incredible action, shot by Stephen Sommers to a degree of expertise that rivals many of the big action directors. From a thrilling bus chase through London (Heavily influenced by Sir. Roger Moore’s first James Bond classic ‘Live And Let Die’), to the mighty Scorpion King finale, there is plenty of mummy action to excite any fan of blockbuster cinema. And with the addition of Freddie Boath as little Alex, there’s plenty of comic relief between himself and Evie’s hilarious brother Jonathan (John Hannah) to calm us down in between the spectacular action and wild scares. Brendan Fraser and Rachel Weisz are on top form too, with Evie especially getting a big upgrade in story. The plot does fall into the trap of over complication, most notably the additional plot of Evie being a reincarnation of an ancient Princess. But for it’s somewhat messy story, ‘The Mummy Returns’ makes up in some of the finest action sequences we’ll ever see.
https://www.youtube.com/watch?v=qs1QcRTOMEg
Where a blockbuster finds extra magic is its soundtrack, both score and new songs. And boy does ‘The Mummy Returns’ deliver. The Alan Silvestri score is gorgeous, heart pounding and easily one of his finest works. Jumping from classic beats during the epic adventure scenes, to a harder Egyptian rhythm for the movie’s several fight scenes and that stunning finale, Silvestri proves himself as always of the greats in movie music. And to top off the soundtrack is an incredible end titles song from rock band Live, titled ‘Forever May Not Be Long Enough’. Tough, pounding, with guitar riffs that blow the mind, and the spectacular Egyptian backing vocals, that song stands as one of the best movie songs ever.
https://www.youtube.com/watch?v=PO-ndnA3s1c
‘The Mummy Returns’ is not perfect, but it’s pretty darn close. Action-packed, hilarious and filled with amazing effects, along with that Silvestri score and killer rock track from Live, this is a movie worthy of its great success and one any fan of action blockbusters should have in their collection.
https://www.youtube.com/watch?v=6XyUIXqIoAM
Check out the brilliant new Tom Cruise blockbuster ‘The Mummy’ at cinemas now. It’s a lot of action-packed fun. “Show me The Mummy!”.
https://www.youtube.com/watch?v=GzorZUuZqEI