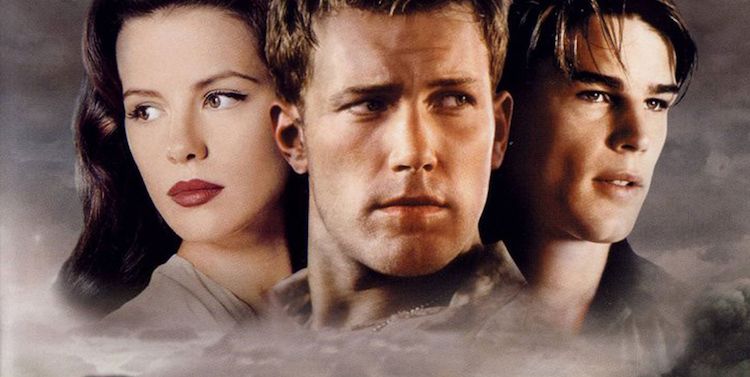 ‘Pearl Harbor’ marked the end of a 3 year wait for a new Michael Bay movie. With ‘Armageddon’ in 1998 and ‘Pearl Harbor’ in 2001, this has been the longest we’d had to wait for new Bayhem to hit the screen. But boy was it worth waiting for.

Using the events of the horrific 1941 attack by the Japanese against America’s military base on Pearl Harbor in Hawaii as its basis, ‘Pearl Harbor;’ tells the story of two fighter pilots enlisted in the army, who grew up together as best friends. When Rafe (Ben Affleck) falls in love with a nurse, Evelyn (Kate Beckinsale) while enlisting, but volunteers for his country as America fights against Germany, his friend Danny (Josh Hartnett) is left to pick up the pieces as news hits that Rafe has been killed in battle. But as Danny and Evelyn begin a new life, with each other, Rafe, who was not killed, but captured by the enemy, eventually returns home to find his future wife and best friend have become an item. With relationship struggles coming between the trio, an unholy attack rains down upon them, as Japan, in fear of America delivering a blow against them in the war, launch a bloody and cowardly battle on Pearl Harbor, killing thousands of people. The two friends are forced to work side by side in an effort to survive and defeat the attackers, with Evelyn on the ground trying to save the lives of the many victims. But can they make it through one of America’s most horrific events in history and the coming retaliations by the USA?

‘Pearl Harbor’ has long since divided audiences worldwide, with a lot of the criticism falling upon the Rafe, Danny and Evelyn triangle. Some love the movie, while others are less positive. For me personally, I adore the movie. Every aspect of it appeals to me. The story, the characters, the incredible battle sequences etc… Everything just works perfectly. The romance is the kind I grew up watching on TV. Those old beautiful love stories from the 1940’s and 1950’s, such as Cary Grant’s ‘An Affair To Remember’ and of course the original Pearl Harbor love story ‘From Here To Eternity’, from which this movie takes great inspiration (As James Cameron did with his 1997 version of the 1953 movie ‘Titanic’). That sweeping glorious score, those magnificent slow motion shots of lovers waving goodbye, the script with wonderful quotes like “Every night I watch the sunset and soak up every last ray of its warmth, and send it from my heart to yours.”. Michael Bay is not known for his love of romance, but the way he did it here is exactly the way I love it. Nothing sleazy, nothing dull, just pure cheesy old Hollywood romance. When you think about it, he handled that love story the way he handles his action scenes… Big drama, beautiful scenery and plenty of epic shots mixed with marvelous music. A helicopter at dawn is the same magic we’d get if we saw a solider wave goodbye to his fiance as he leaves for war. There’s some who prefer a love story more akin to Cameron’s ‘Titanic’… Cliche characters (Rich girl, poor boy!), graphic nudity (No matter how good Kate Winslet looks!) and lots of innuendo/ weird sex scenes (Foggy car windows? Oh stop it!). But for me, ‘Pearl Harbor’ is the king of old romance in the new age.

As for the battle sequences and special effects… Wow. That’s the word that best sums up everything you see. Wow. The attack itself lasts over 30 minutes, it’s a constant barrage of mayhem, bullets, bombs and death. Although it is a movie, the emotion is all there, the hatred and the evil. As you’re watching one spectacular explosion after the other, you’re constantly being reminded that this is not just a Michael Bay action blockbuster. This happened. Soldiers weren’t the only victims, and American tanks, ships and planes weren’t the only targets. Innocent people were gunned down, including many women. Hospitals were attacked and sick people murdered. It was a day of pure horror, when so many people lost their lives. And Bay never forgets that, as he does deliver his brand of massive Hollywood excitement, but never treats the subject as a joke, or feels the need to go too far. Although there is a director’s cut, featuring unrated violence and far more horrific and graphic death scenes, which is sadly now out of print on DVD. Someone needs to bring that version to Blu-ray. Up to this point, Michael Bay delivered the goods on the good old-fashioned buddy cop movie (‘Bad Boys’), a prison blockbuster (‘The Rock’), a space sci-fi spectacular (‘Armageddon’). And with ‘Pearl Harbor’, he got to show off his chops at directing a old-school war movie. And yet again proved himself to be the biggest and best name in action filmmaking.

Coming into the new millennium, something that had to be carried from the last two decades of the previous millennium, was a massive action movie score. Not just those urban cool soundtracks or the big John Williams stuff, but full-throttle action scores. The likes that were born from movies like Jerry Bruckheimer productions, the disaster movie revival, and Schwarzenegger/ Van Damme/ Stallone movies. And one of the most incredible people to come from that era… Hans Zimmer. Responsible up to 2001 for movies such as ‘Gladiator’, ‘The Lion King’, ‘Days Of Thunder’, ‘Crimson Tide’ and of course ‘The Rock’, ‘Pearl Harbor’ was his most ambitious work to date. Scoring an action movie or a drama is one thing… But creating enough score for a movie that stands as both is hugely difficult. And he did it. Delivering what is surely his greatest score, in my opinion, Zimmer’s score ranges from sweet hometown, to moving and tragic romance, all the way to blockbuster action level, for the spectacular battle sequences. The score has always been one of the most standout features of ‘Pearl Harbor’, it’s a masterpiece. But it doesn’t stop there. Back once again is the legendary songwriter Dianne Warren, this time penning the heart melting smash hit ‘There You’ll Be’, performed by the greatest woman in music, the Grammy winning Faith Hill. As moving, as romantic and as wonderfully sung as a song should be for a blockbuster on the scale of ‘Pearl Harbor’.

Like they did on their previous movies together, Bay and Bruckheimer have a top notch cast, made up of stars and from past and present. Alongside the 3 leading stars, Ben Affleck, Kate Beckinsale and Josh Hartnett, there is Jon Voight, Tom Sizemore, Jennifer Garner, Dan Aykroyd, Cuba Gooding. Jr, Michael Shannon and Alec Baldwin. Everyone here delivers the goods, even if some were a little underused (More of Jennifer Garner and Michael Shannon would have been nice). But the 3 leads are the ones given all the meat – Ben Affleck as Rafe is still my favorite performance of his, he has so much charm and humanity, along with a fun sense of humor. Kate Beckinsale is wonderful, she reeks of 1940’s movie star quality, and her character of Evelyn is directed perfectly by Bay, making her both desirable and elegant. And Josh Hartnett tops off a terrific trio, as Danny, the shy and unsure soldier who steals the lady’s heart. All 3 play their roles perfectly, paying homage to those classic old love stories. Where DiCaprio and Winslet stink of cliche and sweat in ‘Titanic’, Affleck, Beckinsale and Hartnett give us a really sweeping and beautiful story of tragic love gained and lost. It’s so easy to love these characters and feel for them as the movie travels to its end.

‘Pearl Harbor’ may not be to everyone’s taste, but if you’re like me and all you want is a beautiful old love story mixed with incredible action and tragedy, this movie should be for you. As a fan of both spectacular war movies and a lavish love story, ‘Pearl Harbor’ will always hold a place in my heart. Pure Hollywood at its best. Bayhem at its most meaningful.

Come back real soon, as we continue to count down to Michael Bay’s latest war blockbuster, ’13 Hours – The Secret Soldiers Of Benghazi’ with the next movie in his stunning 20 year career with ‘Bad Boys II’. Whatcha Gonna Do?