Comics and Alien fans alike forget how fruitful the time period between 1986’s Aliens and 1993’s Alien 3 was for exploring that universe of horror and action. Not only did we get the violent, pulpy Aliens vs Predator series, but writers expanded the lore and space (no pun intended) of a fertile franchise, taking it from the air lock of the USS Sulaco to the wastelands of the offworld colonies we never saw on-screen. One of my fondest memories as a kid was reading the gigantic multi-volume retelling of James Cameron’s genre-defining entry, complete with deleted scenes we hadn’t yet seen in his Director’s Cut. For anyone who reads movie novelizations, it makes sense; the comic makers probably drew from the shooting script or another draft instead of just referencing the film. I fully believe it was Aliens that served as a gateway for me into comics. Even then, I was seeking out the most violent, scary stuff I could; the stuff our parents tell us not to read or watch.

Along with Colonial Marines and Labyrinth, Aliens: Salvation is a high water mark for the series. Borrowing enough from the franchise to make it an Alien product, Dave Gibbons (Watchmen) and Mike Mignola (Hellboy) made something very unique in 1993. The story of a crashed freighter on a remote planet is familiar enough, but giving the lead to Selkirk, a god-fearing man who goes to the darkest recesses of his own personal hell to uncover a company’s corruption and reveal his own singular catharsis is one of the deepest stories to appear in Dark Horse’s catalog. The horrors Selkirk experiences, all the while engaged in a narration with his Lord, is deserving of the brand of gothic horror Ridley Scott’s Alien kicked off, but it also harkens back to the original treatment for David Fincher’s Alien 3. I don’t know how much overlap this story had with the wooden planet / monastery pitch for Alien 3, and it’s certainly not a one-to-one comparison, but Selkirk’s arc is the type of fervent religious mania I expected from that story when I first heard about it. 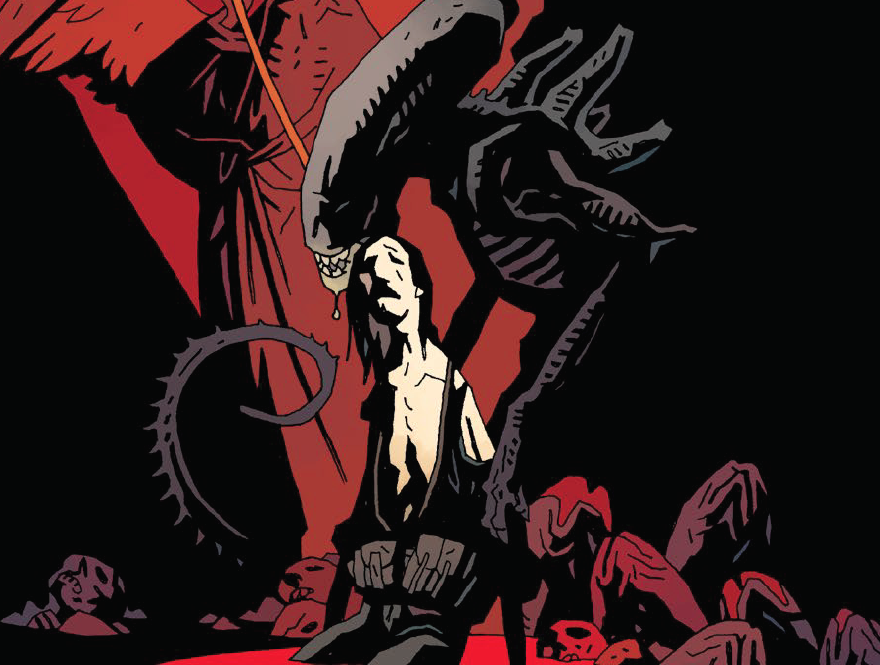 Unsurprisingly, Mignola’s artwork is beautiful and transporting, perfectly fitting the darkness and possible hope of Gibbons’ yarn. It’s a great story involving betrayal, cannibalism, heroic action and enough nods for Alien fans to wet themselves. It’s also fitting for a revisit, especially in Dark Horse’s sexy new hardcover edition. Salvation is one of the most deserving entries in the comics franchise.

Aliens: Salvation is available digitally and in print on September 2nd.
Purchase HERE | Greg on Facebook |  Action A Go Go on Twitter and Instagram |Be sure to leave your thoughts in the comments section!