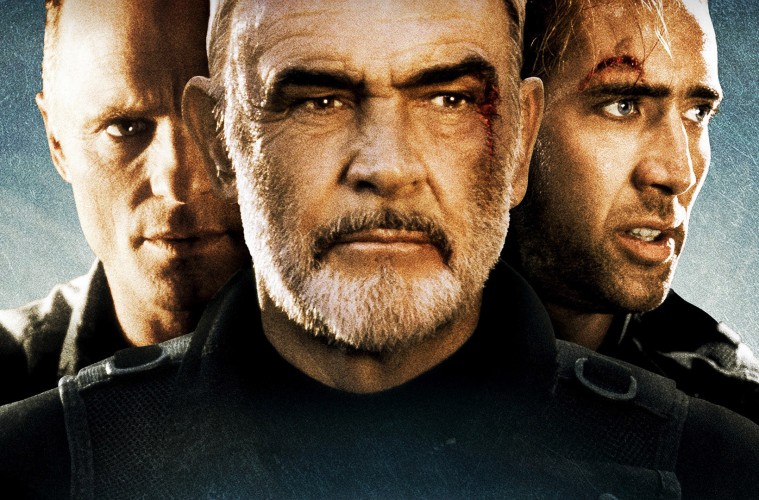 To carry on our look back at 20 years of Bayhem, this time we’re onto the next movie in the long line of action blockbusters by the one and only Michael Bay. Last time, we covered ‘Bad Boys’, the first big screen outing for Mr. Bay, all those 20 years ago. Now it’s time for ‘The Rock’.

Following ‘Bad Boys’ would never have been easy for Michael Bay and the producing legends Jerry Bruckheimer and Don Simpson after the massive success of that movie the previous year. But never one to back down from a challenge, they moved on to their next project, the very ambitious and far more expensive production of ‘The Rock’.

Casting one of the most legendary actors in cinema, Sean Connery, as their lead hero was an inspired decision. An aged action star heading a blockbuster of this kind was unheard of. But it worked brilliantly. As the next lead, they cast Nicolas Cage, who at the time was not known for action movies, but rather comedy and drama. But thanks to his role in the movie, he went on to star in countless other action classics, such as ‘Face/Off’, ‘Con Air’ and ‘Gone In 60 Seconds’, all movies made under Disney and their studios, and then Disney themselves creating even more movies with him, like the spectacular ‘National Treasure’ movies. And to top it all off, they needed a fine actor who could hold his own against Connery and Cage, so they called in classic actor, Ed Harris. Much like Cage, Ed Harris was not known for action movies, but he delivered a terrific performance.

Set upon the iconic Alcatraz Island in San Francisco, ‘The Rock’ centers on a disillusioned ex-army leader (Harris), who with a team of mercenaries, steals a supply of missiles armed with V-X nerve gas. They then take control of the infamous Alcatraz prison, while a tour is in progress. Keeping the visitors as prisoners, and setting the missiles up around the base, they demand a ransom of $100 million, or they will launch a deadly nerve gas attack on San Francisco, wiping out much of the population. With only a former escapee of Alcatraz (Connery) and a chemical weapons expert (Cage) to lead a military rescue and retrieval of the deadly gas, the two men must work together to survive and save an entire city from annihilation.

We all know these days what Michael Bay is capable of as a director. But with only one movie under his belt (Even if it was one of the greatest action movies ever) at that time, he needed to prove he wasn’t a one hit wonder. He also need to show that he could produce more with much more money. And he did it. He really did. Bay has a knack of showing money on screen. With ‘Bad Boys’, he made the most of a $19 million budget. But with a $75 million budget for ‘The Rock’, he had much more money to play with, and with a much bigger cast of stellar actors, he really couldn’t fail. ‘The Rock’ actually cost more to make than ‘Jurassic Park’. And you can see every cent of its budget on screen.

The action sequences and special effects are second to none. The opening robbery scene is absolutely stunning, mirroring the opening of ‘Bad Boys’, but on a much bigger scale. The massive car chase through the streets of San Francisco is still, in my opinion, the best car chase ever. Between the choice of cars, and the stunt pieces, that chase is truly unbeatable. And then there’s the many spectacular shoot outs and fights through the prison itself, including a blazing chase through the tunnel system (In carts!) and the finale, which again, in my opinion, is the greatest finale to any action movie. It’s absolutely relentless, it just keeps the blood pumping and the nerves shredding, as the heroes and villains face off in the ultimate showdown. And that flares scene still stands as one of the most iconic shots you will see in modern action cinema. With a mix of explosives and heavy duty stunt work, along with fantastic CGI effects, more stunning action you will never see in any other movie.

The music is another major component when it comes to action movies. Many people may push it aside and not pay any attention, but it’s the flavor to me. You can’t have a truly great action blockbuster without a massive score. And on hand to deliver the goods is the incredible legend Hans Zimmer (Who, for me, is second only to John Williams for his movie score works), Nick Glennie-Smith and Harry Gregson-Williams. Three composers (Plus help from various other composers) working on one movie is uncommon, but wholly effective. Especially here. Score pieces from the action scenes lend an almost unbearable excitement to the movie, that full-on bombastic music pumping from almost every frame. It’s totally infectious. The car chase and finale are the finest examples, I can’t imagine those scenes without that magnificent score.

The cast and writers are all in top form, with the three principle actors delivering the goods. Connery and Cage make a terrific double act, as they consistently hate each other through the whole movie, while needing to stick together to take on the bad guys. With a brilliant supporting cast including William Forsythe, David Morse, Michael Biehn, John Spencer, John C. McGinley, Tony Todd etc…, the character work in ‘The Rock’ remains some of the finest teamwork in any action movie. The writers, David Weisberg, Douglas S. Cook, Mark Rosner and Jonathan Hensleigh deserve so much praise for their work here. The script is quick, snappy and witty, ranging from humorous gags of the two leads, to the threatening nature of the various psychopaths and their leader. Also involved in the writing are the heavyweights of Quentin Tarantino and Aaron Sorkin, who both lent a hand to writing proceedings, but went uncredited.

While movie fans will always have different opinions and personal favorites, ‘The Rock’ remains, in my own humble opinion, simply the greatest action movie ever made. There are some that come close, but I believe that none will ever knock it from the pedestal I hold it on. And as a huge fan of Michael Bay and his movies, I always love watching his many trademarks take shape in this movie, as they also did in ‘Bad Boys’. When we see the ‘Transformers’ movies now, or his new movie coming next year, ’13 Hours : The Secret Soldiers Of Benghazi’, we see those classic trademarks still used in full vigor. Who doesn’t love a good “Helicopters at dawn” scene? Or a rocket flying over a giant football stadium? ‘The Rock’ is action film making and Bayhem at its very best!

Check back soon, as ‘Armageddon’ is the next movie on the mighty list of Bay’s 20 years of blockbusters. You don’t want to miss a thing.