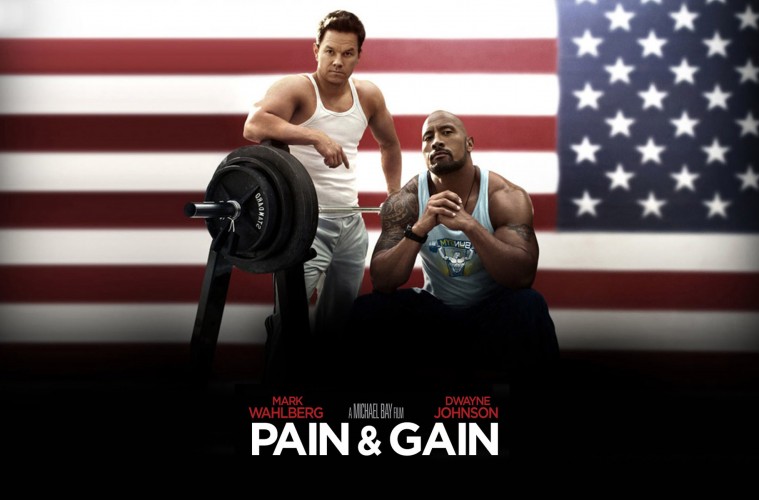 A little after 20 years, but who’s counting?… We have come to the end of a massive 20 years of ultimate Bayhem, with a look at his most different and most insane movie to date, ‘Pain And Gain’.

In between ‘Transformers’ movies, Michael Bay turned his hand to a lot of producing, but hadn’t directed a movie between the first 3 movies of the massive franchise, so naturally he became restless and felt like doing something different. Before ‘Transformers: Age Of Extinction’ hit the screens in 2014, Bay took on a personal project with ‘Pain And Gain’. It was a true story that had fascinated him for years, and he really needed to show that he could do more than blow things up better than anyone in the movie business, so he took a short break to bring this hilarious and very gruesome story to the screen.

‘Pain And Gain’ follows the true life tale of two convict Miami bodybuilders, who, after released from prison, kidnap a wealthy crook and force him to give up his riches. But when the two criminals get what they want, they decide that releasing their prisoner is not in their best interests and plan to murder him. Due to a horribly planned execution, the crook manages to survive against the odds and sets out to find his kidnappers and have them brought to justice.

As ‘Pain And Gain’ is “mostly” a true story, some events and names were changed, to both protect the survivors of the crime-gone-wrong, and to create more drama for the screen. And if anyone can make something more dramatic, it’s Michael Bay. With two major leading movie stars, Mark Wahlberg and Dwayne ‘The Rock’ Johnson, along with a terrific supporting cast including Tony Shalhoub and Ed Harris, the movie fails to entertain, thanks to some outrageous performances. Shalhoub (best known for his wonderful TV series ‘Monk’) is especially fantastic, giving my favorite performance in the movie as the crook Victor Kershaw (not the real victim’s name). But Wahlberg (as Daniel Lugo) and The Rock (Paul Doyle) are also on top form (Their best performances, in my opinion), as the steroid-pumped bodybuilding knuckleheads, with so much energy and insanity that it’s almost impossible to believe they were based on real life criminals. But anyone who knows the story, knows the history of these guys, and while we’ll laugh watching the movie, the facts remind us that ‘Pain And Gain’ is also a serious study of two violent criminals whose actions rocked the USA.

While ‘Pain And Gain’ is not Bay’s traditional style of filmmaking, it still has his brand of Bayhem written all over it. From the spectacular shots of Miami, to the countless shots of beautiful women in bikinis, all the way along to the several nail-biting chase sequences, this is still very much a Michael Bay movie, but with a comic book edge to it and more steroids than the Russian Olympics team. His love of glamour and destruction is always on display, and there are some terrific action scenes here, although Bay originally promised he would tone down his own style to tell this story. Thank God he lied. He couldn’t have done a better job.

‘Pain And Gain’ may not get the recognition of Bay’s bigger blockbusters, and it certainly didn’t get the box office receipts (earnings of $89 million worldwide for a movie with two huge leading movie stars and Michael Bay is dismal, by today’s standards at least. It should have made at least 4 times that!), but it’s still a spectacular movie, packed with fun, excitement and some very gruesome violence, and Tony Shalhoub’s performance is fantastic. Certainly a movie I’d happily recommend to anyone, a very worthy addition to any movie lover’s collection.

And that’s it. All of Michael Bay’s movies in his first 20 years, a massive career in blowing up our screens. And he’s far from done, as we’re within short distance of his next big screen blockbuster, ’13 Hours: The Secret Soldiers Of Benghazi’, coming this month around the world. This will be his third movie based on true life events (‘Pearl Harbor’ and ‘Pain And Gain’ before it). Arrmed with a stunning story of American bravery and a terrific cast, it’s sure to be an absolute thrill ride. Do not miss it.

To close, here’s a video tribute to the blockbusters of Michael Bay. Be warned… It’s spectacular! Here’s to many more years of Bayhem!