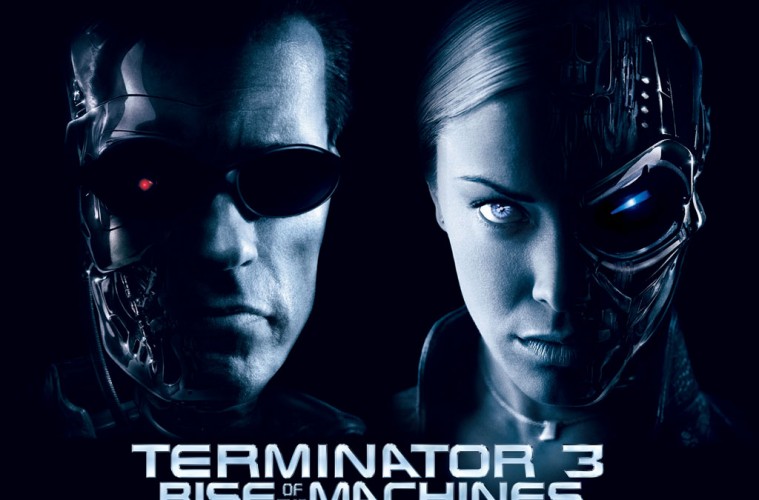 Looking Back… ‘Terminator 3: Rise Of The Machines’

With the severely disappointing ‘Terminator Genisys’ leaving fans of the Terminator franchise cold, it reminds that while we possibly all universally agree that it was a major let down, most fans of the series have never seen eye to eye on ‘Terminator 3: Rise Of The Machines’. While many people have never liked it very much, there are a few who think kinder of it. And then there’s people like me, who just flat-out love it. Hence this piece, in which I try my very best, after 12 years of being a ‘T3’ fan, to defend what I think is a very underrated and horribly misunderstood movie. 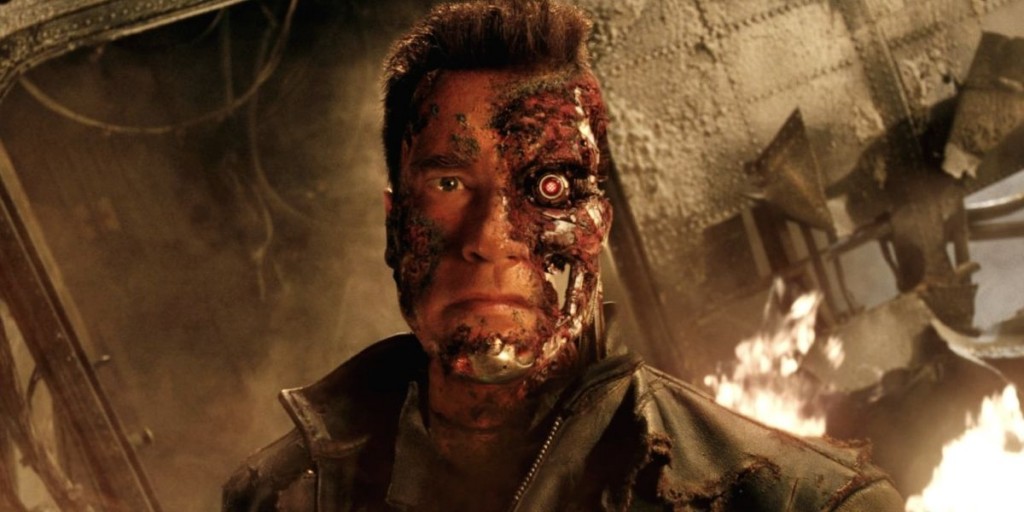 Released 12 years after the iconic classic and beloved action blockbuster ‘Terminator 2: Judgment Day’, which itself followed the cult favorite ‘The Terminator’, Arnie finally donned the shades again to star as everyone’s favorite cyborg good guy/ bad guy, T-800 in ‘Terminator 3: Rise Of The Machines’. This time around, the Terminator is sent back to protect the now adult John Connor (Nick Stahl) and his future wife Kate Brewster (Claire Danes) from a highly advanced and lethal cyborg killer, the T-X AKA ‘Terminatrix’ (Played by the heavenly Kristanna Loken), who is hell bent on executing the future war heroes and ending the threat against the AI super machine ‘SKYNET’ which will destroy mankind in countless nuclear attacks and take control of the planet. With John and Kate unaware that ‘Judgment Day’ is about to begin in a matter of hours, T-800 and T-X come to a battle of epic heights, as one fights to protect the future, while the other aims to destroy it. 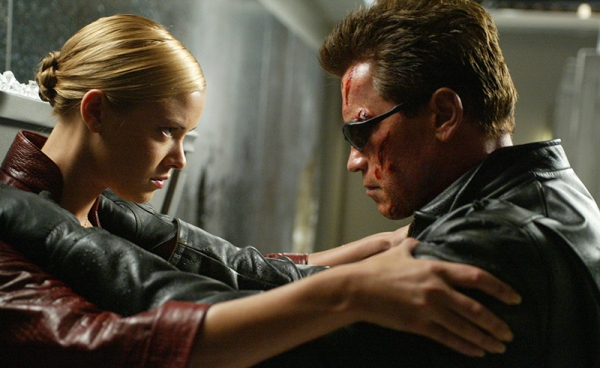 As with most movies returning to a franchise that many believed would never be reignited, ‘Terminator 3’ had a lot to live up to, after the legendary success of ‘T2’. Sadly, upon its release, it was met with less than stellar reviews from critics, many slamming the movie for its writing, acting and its vast difference from the previous James Cameron entries in the series. However, I was one such Terminator fan who went to ‘T3’ on Opening Day, and from then to now, I’ve loved it more than most movies I’ve ever seen. It’s remained in my top 10 favorite movies since its release. But of course there comes questions from fans of the first 2 movies, and the mocking that follows. So I must explain why I not only rate this far higher than both Terminator 1 and 2, but also constantly give it a place in my most treasured of movies. 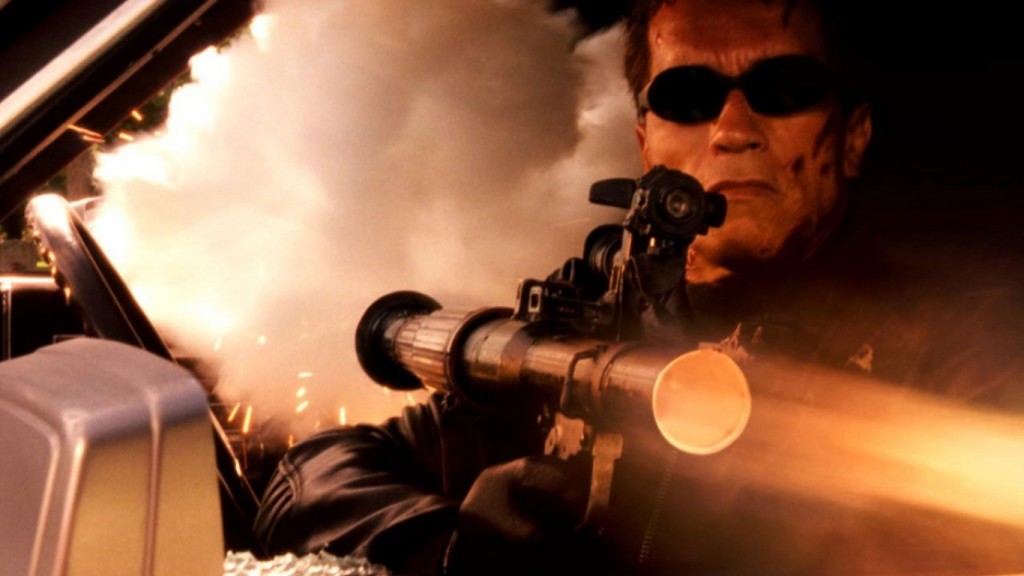 Terminator 1 is a stunning and spectacular action movie, which in my opinion, is drowned in bad acting, cheesy script and B-movie plot ripped straight from a child’s sci-fi comic book. Schwarzenegger even himself, while absolutely wonderful in it, plays the part far too human and far too vicious. And T-800, a weapon of the future, a highly advanced killing machine, didn’t know what Sarah looked like? So SKYNET, a huge system of artificial intelligence that will bring down nuclear war against an entire planet, couldn’t find an image of one single woman? A waitress working in a diner? Please. And Michael Beihn, while I do think he’s a terrific actor (I absolutely love him in ‘Aliens’, Hicks is a true blue American badass!), his role of Kyle Reese I always believe is the reason he never went on to have the career he should have had. His script is terrible, it’s just so cheesy and corny. And his intro scene when he asks what day and what year is it? Ehhh… Shouldn’t he know? People don’t just get dumped into time machines and sent back to any old place. Fair enough, perhaps Reese is just making sure he’s where he was sent. But I didn’t see the T-800 asking anyone what date and year it is. Very silly. ‘The Terminator’ is a truly fantastic movie and very deserving of its praise, but let’s be fair about this, it’s hardly the smartest and best written movie out there, is it? 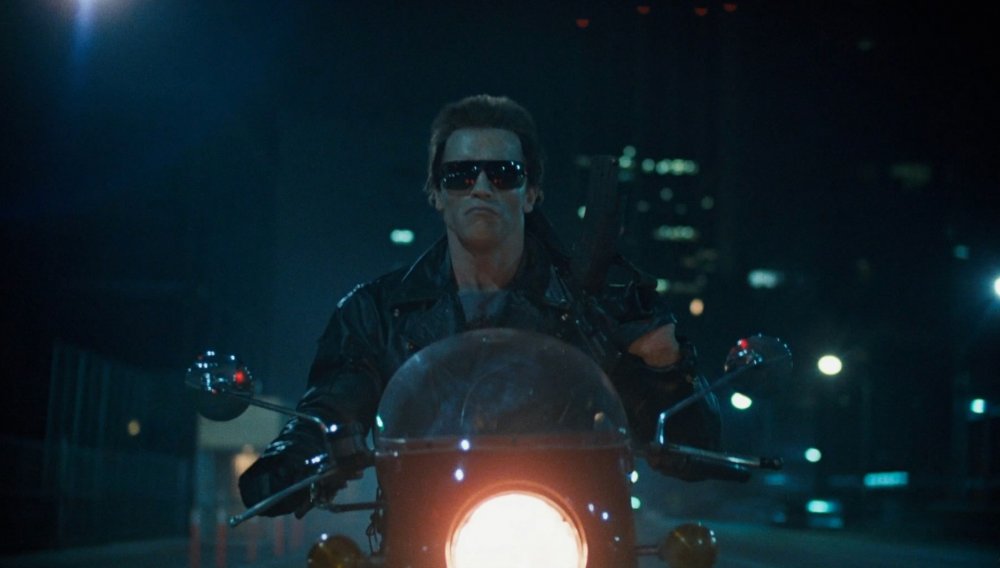 As for Terminator 2, again an incredible and hugely enjoyable action movie. But once again, Arnie plays the part way too human, just far too much Schwarzenegger and not enough cyborg. And the plot? Wipe out the man who creates SKYNET, to stop a war that no one would know about in the past if not for SKYNET? And without a war where no one is sent back in time, therefore no Reese to father John, no John in the future, and Sarah back in 1984 none the wiser to the future. So who stops Judgment Day? And T-800 is sent back to protect and serve John Connor, but continues to question his orders? When told not to kill anyone, he persists in asking “Why?”. What does it matter? It’s an order, follow it. And not knowing what tears are? Although he clearly states he has files on human anatomy? Stuff like that just takes me out of those movies, even if they are designed to be taken with a pinch of salt. And Edward Furlong, while he does have his moments (And actually is a very decent and skilled actor, as ‘American History X’ proves), I find him largely irritating. Maybe more the character than Furlong himself perhaps. The constant cries for mother, the throaty voice (Did he smoke at that age?) and just his general attitude, I really don’t like the kid. The action scenes make up for everything though, that truck / bike chase never gets old, and the helicopter scene in the finale is magnificent. But what is with the police vehicles? Almost every action scene involves a police car, helicopter, van or bike. Why? Don’t get me wrong, I adore both movies, but people heaping praise upon them to the point that any movie afterward is just a disappointment? That’s what troubles me. What’s so wrong with ‘Terminator 3’? Especially if we stop and think of the first 2 movies? What do they both have that ‘T3’ doesn’t? 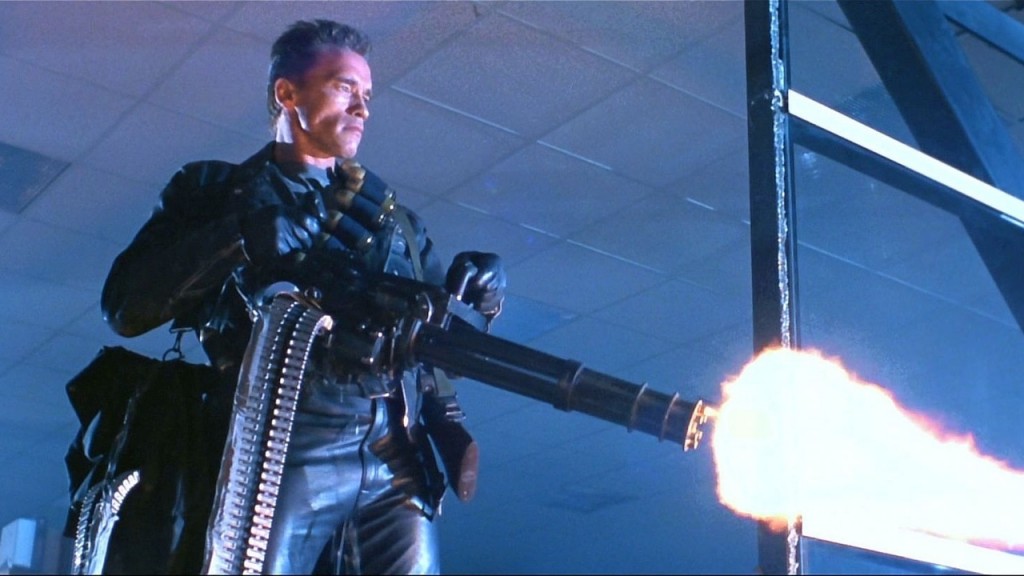 ‘Terminator 3’ is a movie that I long since believe someone stole from my dreams while I slept. Kristanna Loken? As a cyborg assassin from the future? Wearing tight red leather? And called Terminatrix? Taking on Arnold Schwarzenegger in countless fights? Ha. If that’s not the greatest dream ever, what is? And she’s naked in the beginning? And on top of all that, Claire Danes is thrown into the mix? That’s heaven on film. Absolutely. Kristanna Loken, since this movie, has been one of my favorite movie stars, just for T3. In my opinion, the ultimate movie pin-up. 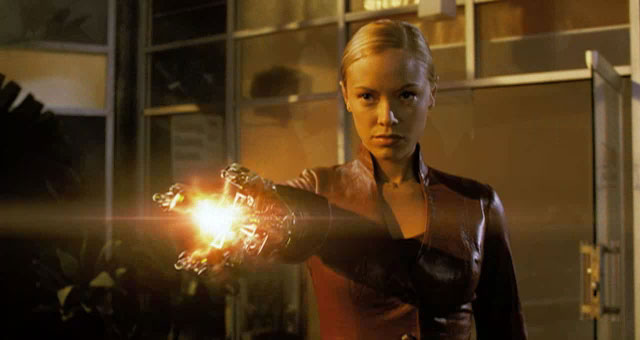 This time around, Edward Furlong was replaced with Nick Stahl. Which obviously makes sense, as Ed went off the rails soon after the massive success of T2. And while many won’t agree with me, I love Stahl as John Connor, he just plays it so human and so naturally. I love when an actor knows when to keep things to a minimum, just let the script flow and the character grow as the movie moves along. Stahl does that perfectly. Claire Danes, then best known for her appearance in ‘Romeo + Juliet’ alongside Leonardo “I deserved an Oscar 4 times, but I’m still waiting!” DiCaprio, also added a lot of value to the movie, as Kate Brewster, the future wife and fellow war comrade to John. She is just such a great personality, she oozes charisma and appeal, which is perhaps the reason she’s now on one of the highest rated TV shows around the world, ‘Homeland’. Kate brings a lot of fun, strength and humor to the proceedings, and obviously is very pleasing on the eye. 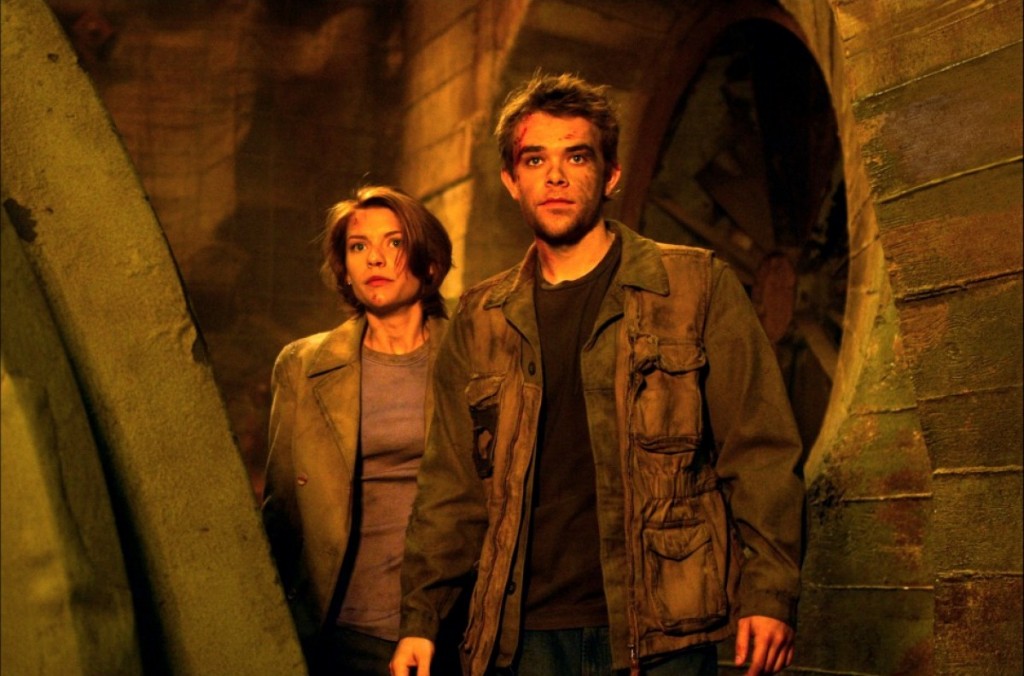 But as joyful as Kristanna is, and great as Nick and Claire are, ‘Rise Of The Machines’ places most of its challenges at Arnie’s feet, as the original Terminator star. And this time, he plays it exactly the way I’d always wanted him too. From start to finish, he is a system. He feeds off of the surrounding characters, he constantly brings that wonderful Schwarzenegger humor to the screen and he delivers his lines with such bravado that he just outdoes his performances in the past 2 movies. While this time, he stills makes the most of the gags (“Talk to the hand!”, “I am unable to comply!”, “Two hours and 53 minutes!” etc…), he plays it as a complete machine, a total cyborg, void of almost all emotion, no high-fiving, no smiling, no questions, just a cold perfect Terminating machine, who is programmed to imitate humans, not to be friends with them. Arnie just couldn’t have played it any better if he tried. And the action scenes, I’ll get to in a second, the true spirit of Schwarzenegger comes to life. And he looks far cooler in T3 than he did in the past movies. Even the way he walks and moves, he’s just so wonderful in it. I’ve always loved Arnie and his movies, and this just made me love him so much more. 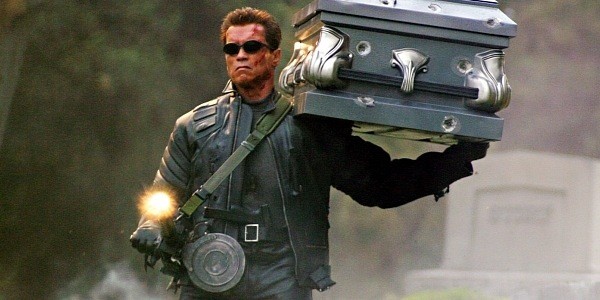 As for those action scenes… Yes, ‘T2’ has incredible action and special effects, and that music score is unbeatable. But T3 just ups the anti on everything. The action is bigger, louder, stronger than ever before. The crane scene is still one of the most incredible action sequences I’ve ever seen in a movie, it’s truly spectacular. The graveyard shootout echoes ‘T2”s terrific SKYNET window scene, but for me far outdid it. Arnie with a machine gun in one hand, a coffin on his shoulder and wearing his shades? (Look above!) That is just new levels of awesomeness. And the finale, the big hurrah, is so powerful that it shook the cinema screening room when I went to it. Who didn’t cheer when T-X came through the building in a helicopter, only to then have Arnie come through with an even bigger helicopter and mow her down? Fantastic, and hilarious! T3’s action scenes just thrill me the way the Teenage Mutant Ninja Turtles thrilled me as a kid. You know that feeling you get when you’re watching one of your biggest heroes on screen going through one genius action fight scene to the next? And you get that little glow? That’s the one.

Although T3 didn’t have any involvement from original creator and director James Cameron, the very brilliant Jonathan Mostow came on board. I had been worried that Cameron’s leaving could affect the new movie at the time, but when I heard the director of Kurt Russell’s ‘Breakdown’ and the wonderful WWII action movie ‘U-571’ was taking the reins, I was thrilled. Mostow is a man of pace, a man of energy, he has no time for messing around, he doesn’t use filler, he just delivers the goods we’re looking for. I love him for that. And let’s be fair, James Cameron has slammed ‘Terminator 3’ in the past, but remember, he praised ‘Terminator Genisys’. 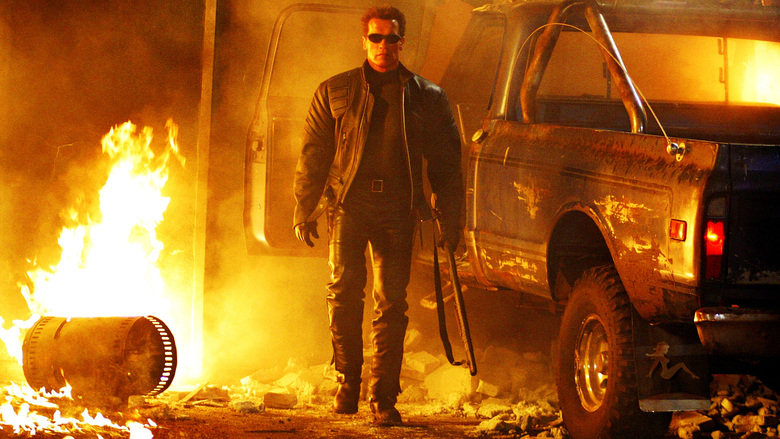 ‘Terminator 3: Rise Of The Machines’ may not appeal to everyone. But if you were in my head, you could see just how wonderful that movie really is. Fast-paced, violent, action-packed, sexy as hell, and super cool beyond words, what else could anyone want?

Here is the awesome theatrical trailer…