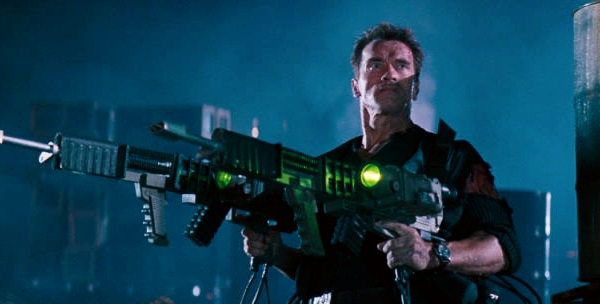 Schwarzenegger. The number one name for action. The king of action cinema. That one name you can almost completely rely on. And yet, in action movie circles, the great man has always caused divisions. Whether we’re fans or not, we tend to have different opinions on his movies. There are some classics that are just universally adored, like ‘Terminator 2: Judgment Day’ and ‘Predator’. But what about those movies that aren’t met with the same adoration? The ones we personally love but most just wave away? For this piece, I’ve put together 5 incredible Schwarzenegger action movies that have rocked my world since I was a child, the movies that made me a fan of the great man despite everyone saying they were rubbish. So, as the man himself would say, “Stick around!”.

Schwarzenegger doing science fiction movies is like Santa Claus delivering presents. It’s just how it should be. In ‘The 6th Day’, Arnie plays Adam Gibson, a helicopter pilot who is cloned and finds his clone living in his home, with his family, and doing his job. As he searches for the truth behind his replacement, Adam becomes the target of the man who has created this clone (A great performance from Tony Goldwyn) and finds himself fleeing from a group of killers who are determined to silence him and keep the secrets of illegal human cloning under lock and key.

Arnie movies are known for being outlandish and packed with action. And this underrated gem does both with ease. Stunning action scenes, brilliant special effects, and Arnie on top form with his trademark ass whooping and quips. Sadly, ‘The 6th Day’ has always been met with a mixed reaction. But I adore it.

Arnie’s love of sci-fi movies naturally continues through his career. And once again, here he is providing yet another terrific movie in the genre. Schwarzenegger stars as Jack Slater, a tough cop from the silver screen, who is magically transported into the real world by the hand of a teenage boy with a  magical cinema ticket. But as Slater emerges into the real world, as do the villains from his latest movie, a dangerous assassin and brutal serial killer. With the boy’s help, Slater must get himself and his enemies back into the screen, before our world is changed forever.

‘Last Action Hero’ was horribly reviewed by critics on its release, with many fans also against it. My first memory of it was seeing it on TV and I was completely blown away by it. It’s magnificent. As much fun and as imaginative as we could ever hope movies to be. Watch out for a 25th anniversary piece soon, where I heap a ton of praise on this glorious movie.

Remember when everyone lost their minds as the 20th century began to close? All the things that were predicted to happen, but never did? This movie is a product of that, but which goes back many centuries in religion. Satan (a spectacular performance from Gabriel Byrne) comes to earth to create a child with a young woman born to birth his spawn. But on the eve of the new millennium, a man who was born to save us all, Jericho Cane (Schwarzenegger), will take on the fight of his destiny and ring in the 21st century by defeating the devil and saving the world from the ravages of hell.

‘End Of Days’, in my opinion, features Arnie’s greatest acting performance. We know him as Terminator and several other awesome characters, but here his acting skills are put to the test, playing the suicidal cop with more passion than I’ve ever seen from him and with some genuinely heartbreaking scenes, including the horrific murders of Jericho’s wife and young daughter. Say what you will, but Schwarzenegger the actor was born with this absolutely incredible movie. The spectacular action is there, as are the fun one-liners we expect, but there’s far more going on than anyone ever gave this wonderful movie credit for. Arnie at his best.

‘The Terminator’ and ‘Terminator 2: Judgment Day’ have always had a major fanbase and a legacy that stands as one of the greatest in movies. But ‘Terminator 3: Rise Of The Machines’ was never met with the same praise. As fate would have it, it’s my favorite Terminator movie and my 2nd favorite Arnie movie. The Terminator once again battles a dastardly killing machine, the epic T-X (played by the wonderful Kristanna Loken), to protect John Connor, the man to save humanity from the rise up of the devastating computer program SkyNet.

The road movie is one of my favorite sub-genres in movies. I always enjoy a great action road movie. And ‘Terminator 3: Rise Of The Machines’ is certainly my favorite of that genre, and among my top 10 all-time favorite movies. With the brilliant director Jonathan Mostow onboard, (the man behind my ultimate Kurt Russell movie, the fantastic action road movie ‘Breakdown’), the movie’s action is incredible, with that crane chase always blowing my mind. The performances are brilliant, and it’s so great seeing Arnie finally play the Terminator as a machine. Most don’t share my opinions on this movie. But isn’t that part of the fun of movies?

What’s your all-time favorite Arnold Schwarzenegger movie? This is, hands down, absolutely mine! Arnie plays John Krueger, an FBI Marshall who is framed for murder by his corrupt boss (James Caan), while trying to protect a witness (Vanessa Williams) from execution after she agrees to testify against her employers, a weapons manufacturing corporation which has been discovered to be selling state of the art weapons to overseas terrorists. With Krueger’s boss leading the hunt, the Marshall and his witness race across the US to survive and bring down the weapons giant.

‘Eraser’ is often overlooked by Schwarzenegger fans, but it’s been my favorite of his movies for so long. With heart-stopping action (that airplane sequence will always be my fave Arnie action scene), awesome special effects and great humor, this movie, like Terminator 3, has long stayed in my top 10 all-time favorite movies.

Regardless of our feelings on Schwarzenegger and his legacy, or even the movies listed here, no one can ever deny he is the king of action cinema.