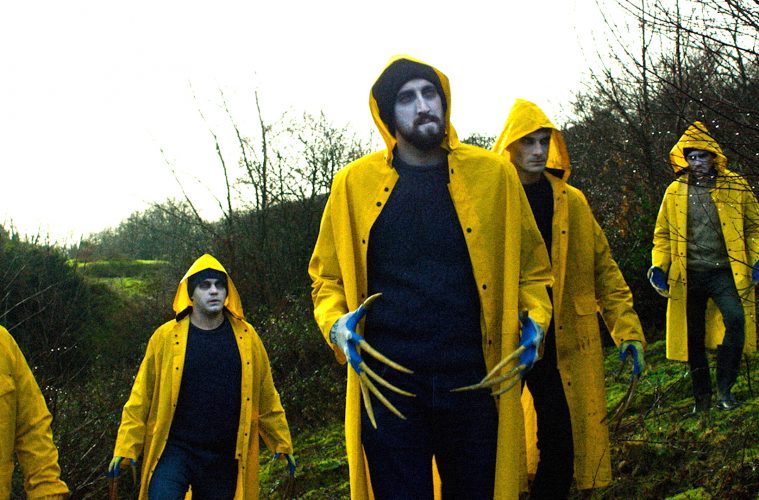 ALIEN PARTY CRASHERS Is One Soirée You Can Skip

I respect what ALIEN PARTY CRASHERS (dir. Peter Stray) tries to accomplish during its runtime (and it tries to do a heckuvalot), unfortunately the film is largely unsuccessful in some very big ways. An approach that mixes the plotting of ATTACK THE BLOCK with the horror/comedy of SHAUN OF THE DEAD and the stakes of THE X FILES sounds like a winning concept, or at least an interesting concept. Sadly though, the film is let down by a forgettable story, trite characters and an overall lack of execution.

The film starts intriguingly enough, dropping us in on some poor schmuck who is suddenly transformed into a monstrous creature with fearsome claws. The film then hops around to several different time periods, where an unseen evil is kidnapping, mutating and murdering hapless victims around the globe (and causing temporal anomalies like you do.) Miles Kendrick (Rob Karma Robinson) is a member of a clandestine U.S. agency tracking the mysterious events and knows that the threat is alien in nature. He’s kind of a budget Nick Fury (and I mean that as a compliment.) Kendrick and his team are monitoring a situation in the tiny Welsh village of Lower Cwmtwrch (actual spelling) where the attendees of a New Years’ Eve party are about to have a very bad night. 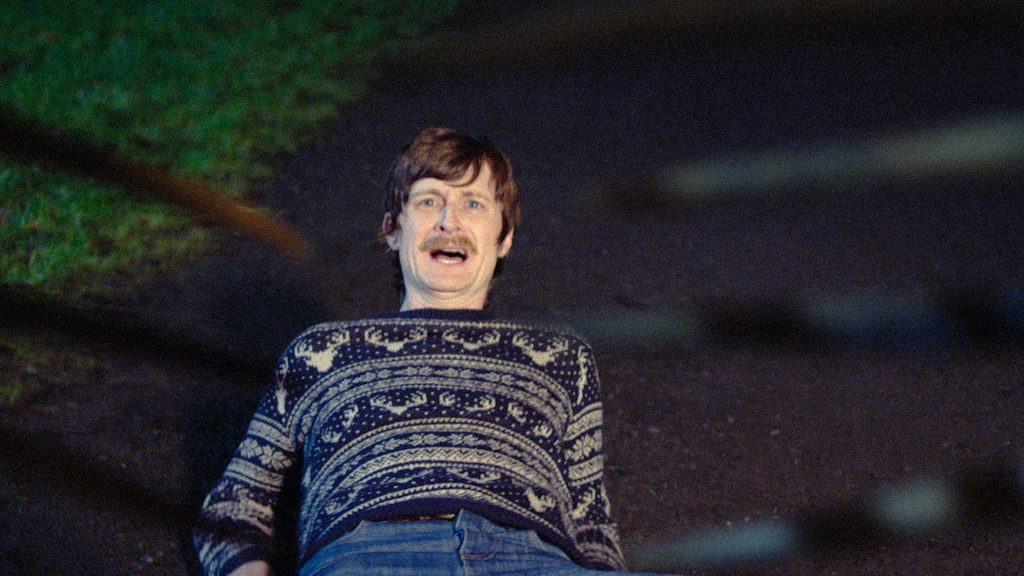 Steve (Craig Russel) is a famous London DJ who has come back to his hometown to throw a party for his friends. These include former love interest Sunita (Sheena Bhattessa), current lover Agnes (Hannah Daniel), Sunita’s brother Nav (Richard Mylan) and mutual friend Ryan (Aled Pugh). The friends proceed to have an…ok…time together. (Real talk, whether intentional or not, this has to be the lamest party I’ve ever seen, and that includes parties that I’ve thrown.) Cue the titular party crashing aliens, or rather their mutated monster minions, who descend upon the gathering en masse and begin to slaughter the attendees. We soon learn that Sunita is one of Kendrick’s European agency counterparts. This reveal makes her the instant badass of the piece and more likable and capable than literally everyone else in the cast. She proceeds to lead the survivors in an effort to keep them from becoming alien mincemeat. 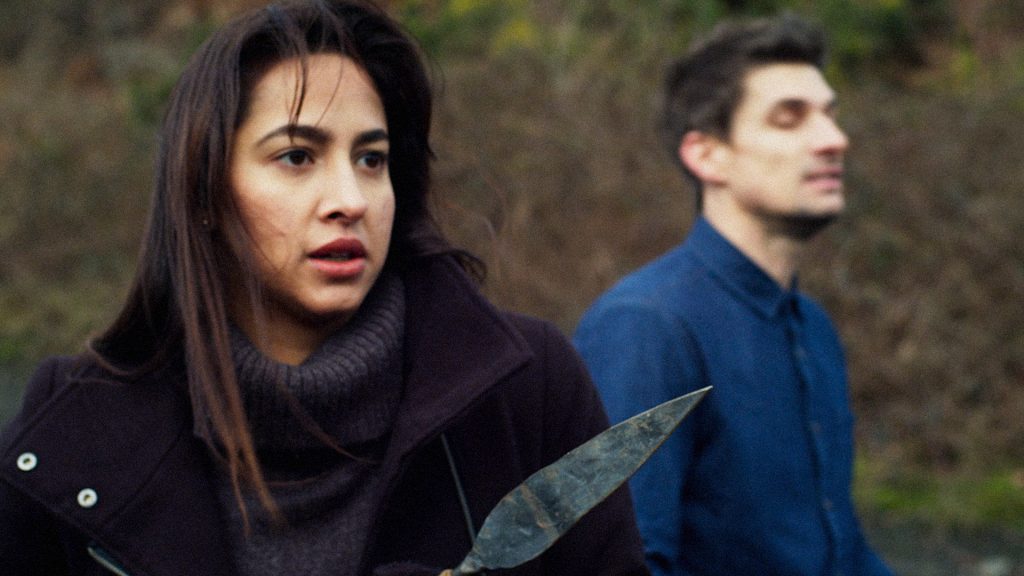 Bouncing between the U.S. agency surveillance group and the party is an odd choice that I think is meant to tie the happenings in the village to global events and also pave the way for more stories in this universe. But in dividing screen time between the two groups, ALIEN PARTY CRASHERS fails to give either an interesting story to tell or allow for much character growth. The plot just feels very muddled and underdeveloped. Focusing on the party group would have made the story more intimate and mysterious, perhaps with a big end reveal of the vast intergalactic conspiracy. The films’ structure as it is gives up the game way too early and relegates the party group to going through the motions of a standard teen-slasher flick.

On that tip I’ll take a moment here to talk about the creature design, or I guess lack thereof. Aside from the aforementioned vicious claws, the human/alien hybrids that terrorize the party-goers all wear yellow rain slickers, explained as a garment that allows them to survive the mutation process which is liquid-based. (Shrug emoji?) I gather that they’re trying to give the monsters an iconic look, hinted at by their nickname of ‘Canaries’ (the films’ original title.) But if the look is at all iconic it’s only because that’s how the killer dressed in I KNOW WHAT YOU DID LAST SUMMER. The overall effect comes across as more slapdash than anything else. 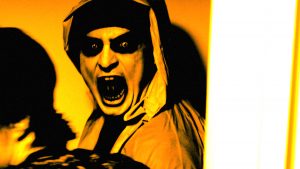 Slapdash is really a good way to describe the whole production value of ALIEN PARTY CRASHERS, this is most apparent in the U.S. government agency scenes, which largely take place in a hotel meeting room. Points for clever dialogue that tries to address the setting but calling attention to it makes it more noticeable. Again, focusing the film on the party crew would have been the more practical choice, but even these sets feel kind of empty and lifeless.

Likewise, the film lacks an interesting visual style in terms of camerawork and lighting. The editing is clumsy and the fight choreography is…probably best left unmentioned.

So ALIEN PARTY CRASHERS doesn’t do so well in the realms of horror, sci-fi, conspiracy thriller or action. I can forgive these things I think. Aside from horror it’s difficult for an indie film to capture these genres in a wholly believable way, mostly because of budget. Of course, ALIEN PARTY CRASHERS purports to be a comedy as well, and its shortcomings here are harder to overlook.

I’m sorry to say that I can’t recall a single joke that lands for me during the runtime of this film. I get that comedy is subjective of course, and there are plenty of ‘comedies’ that I don’t find funny for my own personal reasons, but I struggle to imagine anybody enjoying the humor that this film serves up. I came into this film wanting it to deliver on the comedy most of all but it’s just dreadfully unfunny in most parts and downright boring in others.

SHAUN OF THE DEAD works for a lot of reasons. It is a delightfully bloody zombie film and a visual powerhouse featuring Edgar Wright’s signature electric style of camera work and editing. It is a masterwork because aside from those things it is an absolutely brilliant comedy. ALIEN PARTY CRASHERS tries hard to capture some of that magic but just falls flat at nearly every turn.

This film aims high but putters out quickly, shambling along as lifelessly as its mutant antagonists. I truly meant what I said at the jump about respecting the films’ goals. Stray and his team tried to do something big here with minimal resources. Unfortunately, the sum of these labors isn’t entertaining enough for me to recommend ALIEN PARTY CRASHERS to you, dear reader. 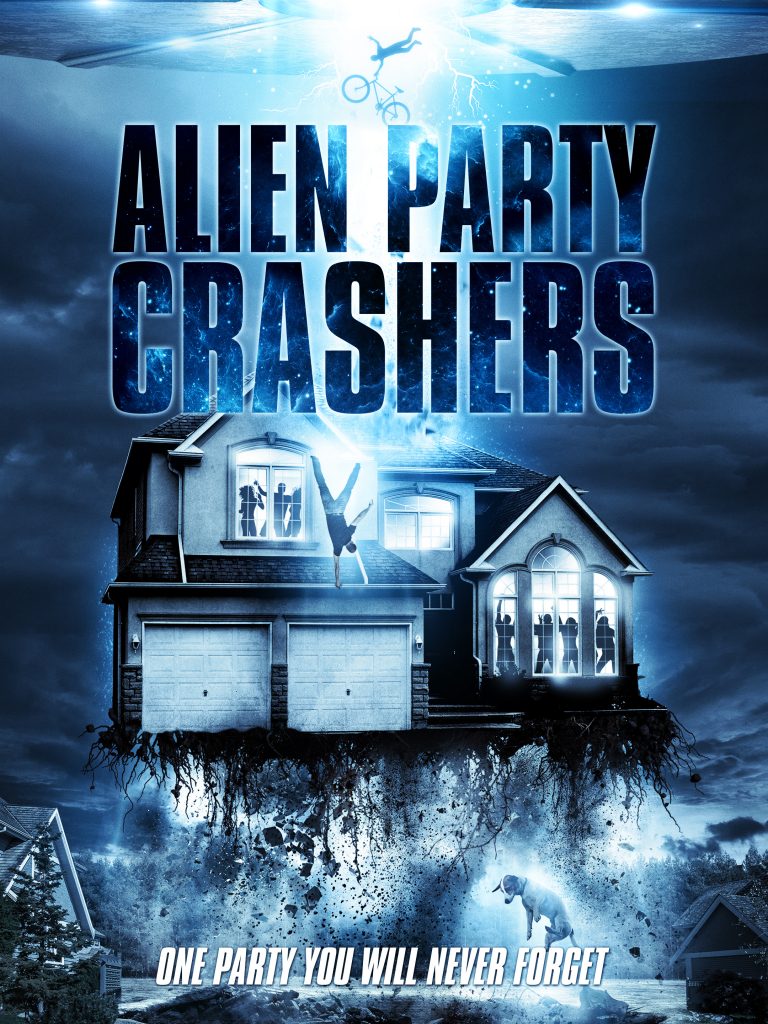