THE ULTIMATE REVIEW OF UNDER SEIGE : YOU JUST CAN’T STOP A GOOD PARTY (OR STEVEN SEAGAL) 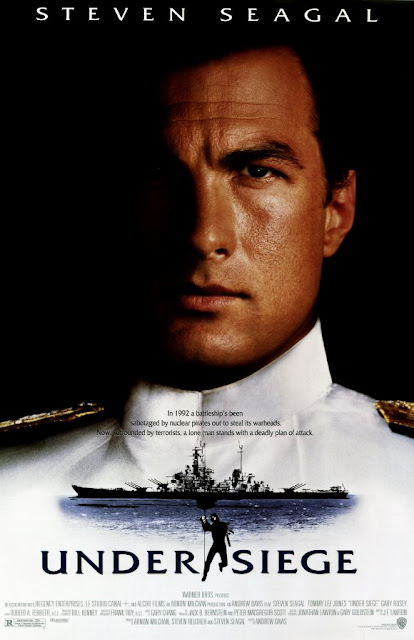 Ladies and Gentleman, thank you for coming here tonight. We have an important announcement to make…WE GOT HIM! After years (maybe!) of avoiding our crack team of writers none other than Steven Seagal is ours for the reviewing! He is going to join the likes of Arnold Swarzenegger, Jean-Claude Van Damme, Sylvester Stallone, and a bunch of other action movie star whose names I can’t spell.
And we’re not just reviewing any Seagal movie, mind you. We’re reviewing what is widely regarded as being the greatest movie staring the stone cold wonder, UNDER SEIGE (1992). Yes…a movie that defines the Seagal legend.
But enough talk! Has this movie stood the test of time? Does Seagal deserve to sit in the pantheon of action greats? Will anyone ever leave comments in the comments section that don’t just call out our shoddy facts? (How about you leave gifs? We like gifs…)
Yes, find all this out and more below, in the ULTIMATE REVIEW OF UNDER SIEGE!!!!
THE STORY…
It’s 1991 and the legendary Battleship Missouri is going to be decommissioned. The first President Bush visited the previous day and the boat is on its way to port in Hawaii. Casey Ryback (Steven Seagal) is the Captains personal cook and is hated by Commander Krill (Gary “Wildman” Busey). Krill brings in an unauthorized band lead by William Stranix (Tommy Lee Jones) and Playboy Playmate Jordan Tate (played by actual playmate and BAYWATCH star Erika Eleniak) to entertain the crew and Captain on this last voyage.
This turns out to be huge double cross, with Stranix and Krill leading an insurrection that puts the ship, and all of its weapons, in their hands. The crew is trapped and only Ryback can put a stop to it.
So basically it’s DIE HARD(1988) on a boat with some extra twists thrown in. Such as instead of Ryback being a cop he’s ex Special Forces. And he’s got all sorts of tricks up his sleeve. The director is Andrew Davis, of THE FUGITIVE (1993) and ABOVE THE LAW (1988) fame. This being Davis’s second dance with Seagal, he’s perfectly suited to get the best out of the soft spoken Hollywood action star. The movie also has an excellent balance between its claustrophobic action scenes and epic battleship stuff. I know, very scientific, but my point is this isn’t amateur hour. This is a well done movie that is crafted with care and will surprise you.
THE PEOPLE WHO GET PAID TO TALK….Get’s its own section this time.
And that’s because there are just so many stars in the movie. But let’s start off with someone who has taken WAY too long to make it to the pages of ACTION A GO GO. Steven Seagal. I just love writing it. Born in the fires of somewhere, Seagal was one those rare birds that was a martial arts expert first and an actor second. This put’s him in the same league’s as such major action stars as Jean-Claude Van Damme and Chuck Norris.
And boy, can he really kick your ass. He ran his own Aikido Dojo in Japan and became a 7th dan black belt in the stuff. Check Out the video below thanks to YOUTUBE,
Now, here’s the tricky thing about Steven Seagal…that greatest strength of his is actually his greatest weakness. Compare Stephen Seagals style to Van Damme or Chuck Norris and it looks…boring. When you watch Chuck Norris fighting Bruce Lee below, tell me what you see.
(Sorry, video removed. But IMAGINE what it would be like watching Chuck Norris fight Bruce Lee)
That’s right, lot’s of kicking, punch throwing, and hollering as well. In other words, it’s very entertaining.
For kicks, let’s throw the Muscles from Brussels in there for another comparison. Here we see a 360 kick compilation.
So after watching these comparisons we can see what separates Van Damme, Norris, and going farther back even Bruce Lee, the godfather of karate in movies, from Seagal. There’s a certain degree of theatricality and intensity that is brought to the movie. In the post 80’s Action era Van Damme probably typified this the most, bringing all those elements to the screen in droves. But this makes Seagal’s career all the more remarkable. He won’t kick or scream or do anything overly showy because that’s the very nature of his martial art. But, thanks to the nature of the movies and the talent of directors like Davis we’re able to get inside what he’s doing and bleed some entertainment out of what could potentially be a tedious exercise in watching people fall over.
Attitude is also a big part of what makes Seagal so watchable. When other people get away with yelling and bulging eyes (looking at you Arnold) Seagal’s easy delivery and oozing machismo come across and add a healthy does of reality to what can be a ridiculous, or worse, truly unbelievable character. Sure, it can be easily lampooned, but he makes bad @ss look easy. Too easy in fact. In UNDER SIEGE this works because the main character is a wolf in sheep’s clothing and Seagal’s understated demeanor fit’s the role perfectly. But that’s enough of Seagal the legend. Let take a look at the other actors that litter this great film…
Which brings us to Gary Busey. 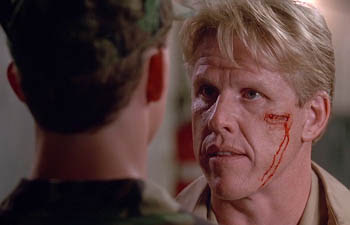 Oh, Gary Busey Gary Busey Gary Busey. To the younger among us he may be known as one of those modern day Hollywood “Crazy People”. You know the type, ravaged by what fame and success they’ve had and are now shells of their former selves that are more often than not ridiculed instead of celebrated. Well you know what? Screw that.
This guy has had a pretty awesome career as an actor in Hollywood, particularly in action movies, and this is one of his better examples. He’s plays crazy to the hilt, is deliciously nasty when he’s making fun of Seagall, and all’ve a sudden manages to get super serious with Tommy Lee Jones when he needs to. Yes, Gary Busey as Cmdr. Krill in UNDER SEIGE is nothing but top class and he holds his own with the best of them. 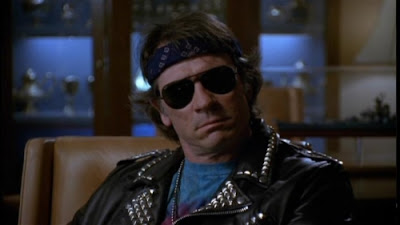 The other main bad guy on duty is Tommy Lee Jones as William Stranix. His back story is that the C.I.A tried to eliminate him but failed, so as revenge he’s taken over the Missouri and will do whatever he can to reek revenge. Of course, Jones gives us an incredible performance here. He goes from to be a hippie to being a cold blooded killer and back again with chilling ease. Obviously there’s something special going on here because in 1993 Davis would go on to direct Jones to an Oscar nominated performance in THE FUGITIVE. 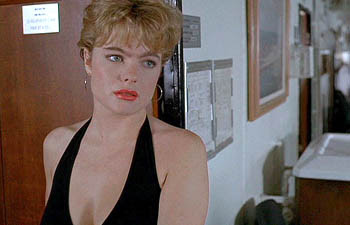 One more star is of particular importance. Ericka Eleniak as Jordan Tate is a strange if effective addition to the cast. As mentioned before, she is a playmate playing a playmate (very meta) and has one of the best “girl popping out of a cake scenes” ever. It’s probably…wait, no, it is the best. If there is a list for such things.
The rest of the cast is rounded out by a stream of Hollywood regulars you’d notice from their minor roles in other projects. For instance Troy Evans is solid in his supporting role, bringing his homey down to earth charms with him.
Glenn Morshower of TRANSFORMERS (2007) and CSI fame is thrown in here as well. It’s interesting to see he’s been playing the authoritative military type for more than twenty years.

If you are a fan of the STAR TREKTV show’s from the 90’s you will be pleased to see that Colm Meaney takes a turn as a bad guy this time, and has an excellent time of it.
Last in this section but certainly not least is Damian Chapa. According to IMDB this was his breakout role, and he went on to be Ken In the classic STREET FIGHTER (1994).
So now that we got that would of the way…let’s get on to the good stuff.
WHAT’S ACTION A GO GO…..
Oh…the action. The action the action the action. Davis is pretty masterful here. When I said top class, I did mean top class.
At the beginning I loosely compared it to DIE HARD and I think that comparison could be carried through here. DIE HARD maintained it’s claustrophobic atmosphere and played on McClane being a rat in a cage with only so few people to talk to.
The opposite happens here. Along the way the cast grows, and so do the stakes. This isn’t a static building that the police can surround. This ship is a moving, breathing thing that is fully armed, and does strike out at times. The stakes are raised considerably, and this compounds the consequences of failure for Ryback. Along the way, other characters step up and add some spice to what’s going on.
The Missouri also functions as a great back drop, and star, of the show. Watching an American icon going full tilt boogie is as entertaining as it sounds, and is miles ahead of BATTLESHIP (2012), a movie that tried to do the same thing but fell flat thanks to it’s lackluster plot and ridiculous ending. 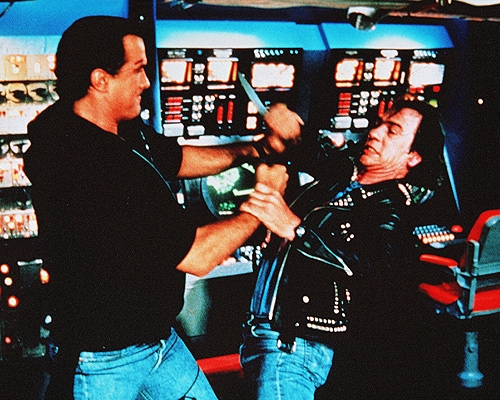 Oh..and the knife play. Usually shoot outs and martial arts play are featured prominently in these movies, but in UNDER SIEGE daggers play a huge roll and it’s a lot of fun to watch. Particularly the final bout between Ryback and Stranix. It’s worth the wait.
WHAT’S ACTION A NO NO….
Of course, this movie is not without flaws.
Some members of the supporting cast give campy performances. They are trying to go for all American, but instead end up sounding stupid.
There are logic holes you could drive a (snicker) battleship through.
But besides these minor flaws the movie holds up. This ain’t ZERO DARK THIRTY (2012) serious, so once you put yourself in the right mindset this movie will carry your through and those flaws will melt into the background.
THE FINAL VERDICT


I got to be honest…I went into watching this movie prepared to be disappointed. I was prepared for much of it to be dated and tired. But thankfully I had no need to worry. Between Seagal, the excellent supporting cast, and the action this movie is an American classic that deserves a place on your shelf or hard drive.
I got it in a BLU-RAY combo pack myself on the cheap at Best Buy. It was bundled with UNDER SIEGE 2 (1995).
I haven’t watched US2 as of yet, but I think I’m going to bring it up against DIE HARD 2 in a DUELING MOVIES bonanza. If that sounds good let us know in the comments.
So get your hands on UNDER SIEGE if you can and enjoy! Classic American action doesn’t get much better than this!
PS. Apparently Steven Seagal is active in training some prominent UFC fighters and has been criticized for taking the credit for teaching some fighters everything they know. Or some such. This, of course, has been turned into a meme. Check it out. 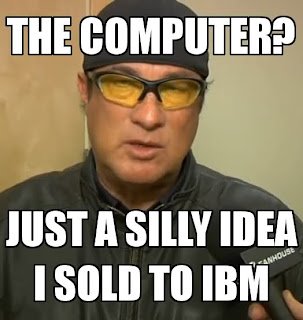 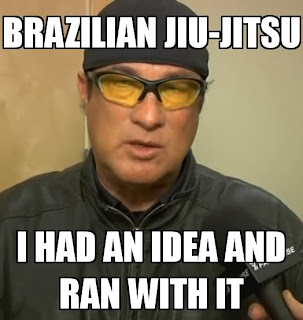 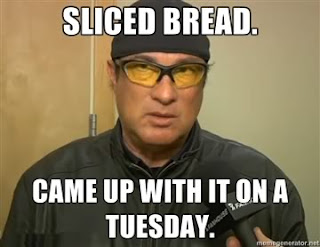 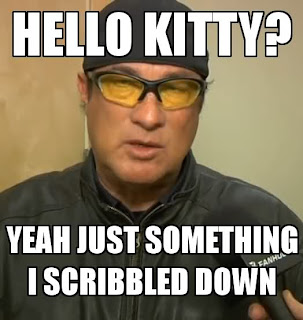 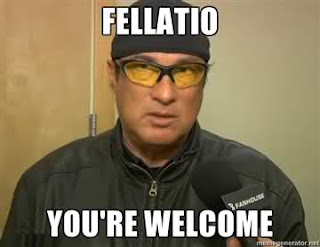 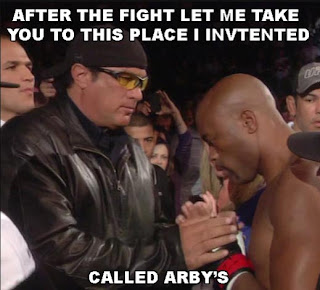 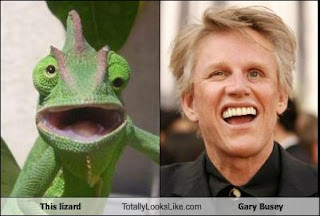 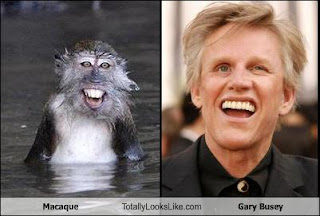 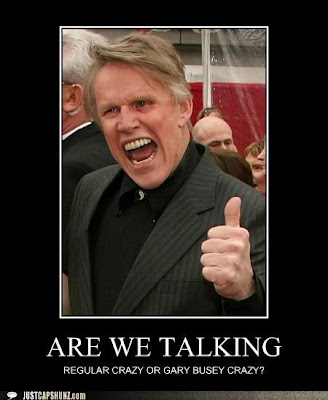 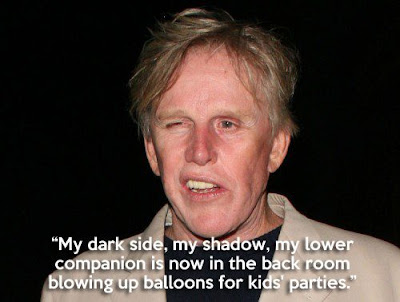 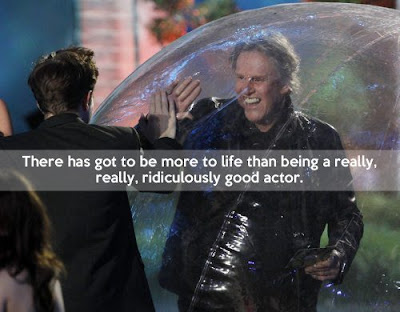 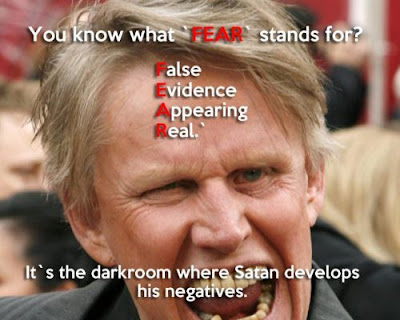 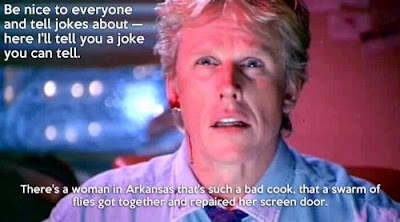 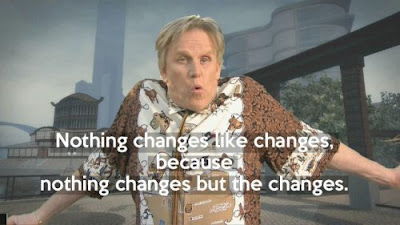 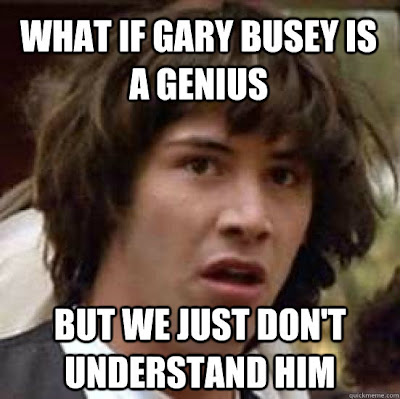 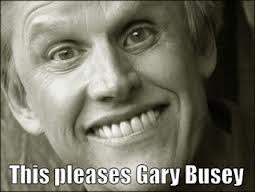