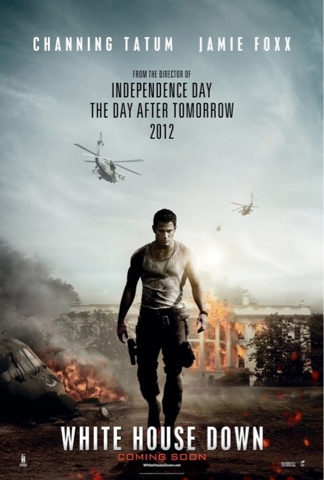 For starters, let me get this out of the way: No, I have not seen Olympus Has Fallen. You will find no comparisons to the OTHER “Die Hard in the White House” movie here.

White House Down is a first of sorts for director Roland Emmerich. He has built himself a hefty résumé directing and writing features which feature either large scale disasters (Independence Day, Godzilla, The Day After Tomorrow) or absurd revisionist history (The Patriot, Anonymous, 10,000 B.C.). WHD is Emmerich’s first big-budget studio film to truly fit neither of those categories (although elements of both do sneak their way in there), and based on this singular example it would seem that Emmerich’s talents may be best suited for high-tension shoot ’em ups, such as WHD, as opposed to world destruction and period pieces.
If you’ve seen any of the trailers or TV spots for this movie, you already understand the essential mechanics of the film. A group of armed men take over the White House and hold The President (Jamie Foxx) hostage for the sake of their own nefarious plans. Meanwhile, a lone cop stuck inside the White House (Channing Tatum) seeks to save The President and escape the building with both their lives.
So is WHD worth spending your well-earned cash on? Good question. And one lacking a clear-cut answer. 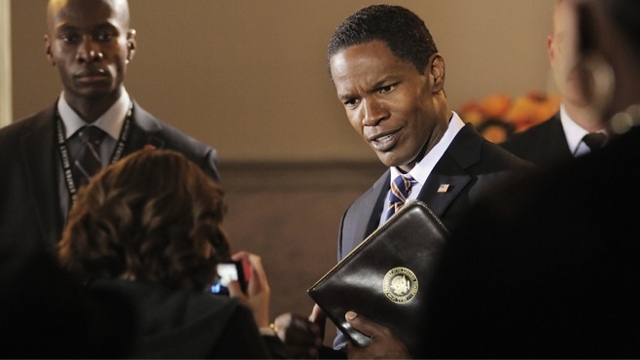 The Bad:
Emmerich.
Emmerich, Emmerich, Emmerich.
Now, I understand the concept of suspension of disbelief. But there is something about how Roland Emmerich presents his stories that simply does not work, no matter how much I, as an audience member, want them to. His films have always been light and silly, but they have never been light or silly enough to accommodate the obtrusive and glaring gaps in common sense that seem to poke their way into every single one of films. The shocking holes in the film’s logic prevent the dramatic tension from building properly, and the villains never come across as anything more than high-strung thugs, not the calculating masterminds the script would have you believe they are. The White House takeover sequence towards the beginning of the film is one of the most absurd scenes I have ever witnessed in a cinema, and a perfect example of this problem. According to this movie, any group of idiots disguised as repairmen can just wander into the most highly secure building in the world and just take the whole thing over without suffering a single casualty within their own crew. I’ve seen Walmart’s with tighter security than the White House in this movie.
Emmerich also indulges in another of his bad habits: populating his film with caricatures instead of characters. There are a thousand and one different names to remember, as in all his films, and at the end of the day every last one of them proves to be little more than a two-dimensional plot-device. Every key character is given a screenwriting 101 level backstory to create the illusion of depth: the villain motivated by personal heartbreak, the President just tryin’ to do right by good ol’ ‘Merica, the absentee divorcee father for a protagonist who has relational issues with his daughter (they even manage to fit the age old “you missed her recital” BS within the first ten minutes of the picture, oh boo hoo). The obvious motivational plot-devices apathetically assigned to each character are elementary in nature to the point that it’s almost embarrassing to watch. Not for one second do any of the major players come across as a well-rounded characters, they are simple stereotypes with simple motives in a simple story. Which would be forgivable, given the film’s intentions as a big dumb summer action movie, if so much time wasn’t spent dwelling on these half-baked sub-plots. The movie takes a good thirty minutes to really get kicking, and those first thirty minutes are a chore to sit through. Even after the show gets rolling, the film often pauses to clumsily plod through an undercooked plot, far more convoluted than a brainless flick like this could ever hope to sustain. It’s in these sequences that the cracks in the film’s plot become glaringly obvious, and they seriously challenged my ability to remain engaged in between the action sequences. 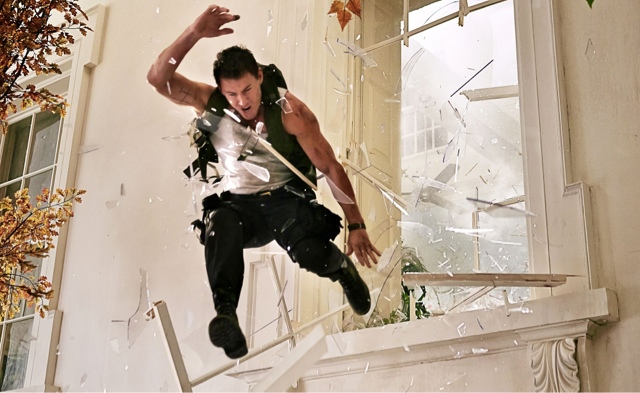 The most damning flaw, and one that will likely frustrate action fans more than anything else in the movie, is how liberally this film steals from the premise of Die Hard. Referring to this film as “Die Hard in the White House” isn’t just a superficial observation, it’s a quite literal description of the screenplay. Step by step, piece by piece, WHD manages to copy the Bruce Willis action classic at every turn. Lone cop with charming swagger stuck in a building with a squad of terrorists who’ve taken hostages? Check. One of the hostages is the cop’s family member? Check. The villains piece together the familial connection and use it to manipulate the protagonist during the final act? Check. One of the terrorists is a tech geek who hums/listens to classical music while doing nefarious computer things? Check. Protagonist has family issues which are resolved by the end of the film? Check. Incompetent, trigger-happy Feds who don’t prioritize the hostages at risk? Check. Wide array of hot-headed vengeance seeking terrorists for the protagonist to fight and systematically kill throughout the film? Check.
WHD makes it nature as a carbon-copy work, it mimics confidently, without shame or apology. The confidence the film exudes almost makes the mimicry forgivable. But thievery is thievery and anybody who knows their Die Hard will have a hard time not getting distracted the the obvious parallels that slap you in the face at every twist and turn.
The Good:
If there is one component that can be singled out for some serious praise in White House Down, it would be the cast. Even when the script gives them very little to work with (which is very, very often) they all seem to be having a blast. Tatum and Foxx have a nice, easy chemistry to them and it’s hard not to start liking them once the action gets kicking and the one-liners begin to flow. I’ve always said that Channing Tatum expresses emotion about as well as a rock that’s had Botox (seriously though, the top half of his face never changes or moves) but his confident swagger works here, he has enough charm to be likable and enough energy to be convincing during his extensive fist-fighting sequences. But the cast MVP is a bit of a surprise. Thirteen year old actress Joey King, best known for playing young Talia Al-Ghul in The Dark Knight Rises and the China Doll in Oz: The Great and Powerful (the only performance in that movie that wasn’t completely terrible), steals every scene she’s in. This is especially surprising given how poorly her role was written, she takes lines that feel like they came from some crappy mid-90’s Tim Allen movie and delivers them with the conviction of a seasoned pro. 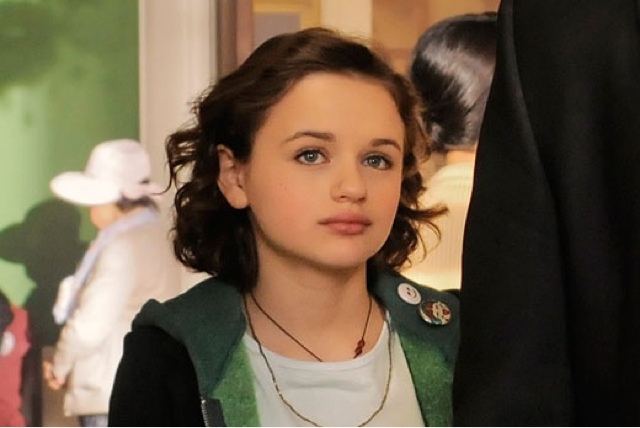 Ms. Joey King, AKA, “this best part of this movie”

The enthusiastic direction during the action sequences was also a surprising source of fun during the movie. What could have been hectic, loud and obnoxious ended up being quite enjoyable, especially towards the second half. A great sequence towards the middle of the films features Tatum and Foxx driving a limo around the White House lawn while trying to escape from missile-launcher wielding baddies. This scene really marked a turning point in the film, where the action sequences became just great enough to overcome the eye-rolling idiocy of the film’s first half.
So is White House Down ACTION A GO GO approved? Sure, I guess. It’s big dumb fun that layers in enough real enthusiasm to allow the viewer overlook some of the REALLY dumb parts. Would I say it’s a must-see in theaters? Certainly not. That being said, it makes for a great date movie, or just a fun way to spend a Saturday afternoon.