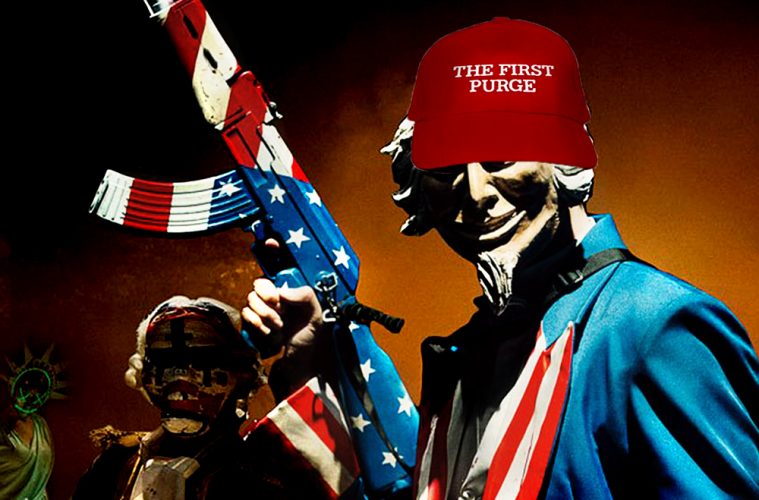 I have always wanted to like The Purge series. In a time where a lot of movies feel very derivative of each other, The Purge is an interesting concept alive with endlessly intensifying possibilities.

There is so much room for action and suspense, so much room to explore intelligent themes with such an entertaining idea that simply asks: What would happen if one night a year nothing was against the law?

If done right, The Purge series could be a modern day spiritual successor to the work of John Carpenter, unpretentious fun with occasionally something to say.

Sadly, The Purge is none of those things, although sometimes it comes close (to be perfectly fair, I never saw the second one, but Election Year is better than the first).

Last week, a trailer for the franchise’s latest installment, The First Purge, was dropped in the form of a 30 second teaser that’s so crappy it’s as if iMovie and Windows Movie Maker had an abortion.

Now, I know what you’re thinking, so prepare for my preemptive strike. It’s not solely a “right vs left” politics thing.

Judge Dredd is a hilarious parody of police and American ideals and it kicks ass. Dawn of the Dead is an understated social commentary on capitalist consumerism and a thoroughly enjoyable watch. V for Vendetta is an anarchist’s revenge plot against right wing authoritarian moralism (make of that what you will, it was the author’s stated intention) and was turned into one of the best movies post millennium.

The Purge series on the other hand is a mostly obnoxious statement on American values that seems largely detached from the reality of what it’s attempting to mock. It could be awesome, but instead often resorts to pretentious cliches and undercooked political statements.

With a trailer so flauntingly on-the-nose, it begs the question, who is this new Purge film for? Certainly not Trump fans or conservatives in general, which it appears to purposely alienate. Probably not the A-political, who have had to endure a D-Day’s invasion worth of pointedly politicized entertainment since the 2016 election. Most likely not the independents, who if anything may watch out of amusement as they would with material even the sane would dub “a little far to the right.”

No, The First Purge appears to have doubled down on the series obvious social messaging to the point where it will be phenomenally distracting unless you happen to agree with the filmmakers’ worldview already.

Well, for the fourth time since 2013, allow me to again assure you that The Purge is NOT where America is headed.

And now, if it’s not too much to ask, can someone in Hollywood please compose one of these Purge scripts with something other than a motorized sledgehammer?