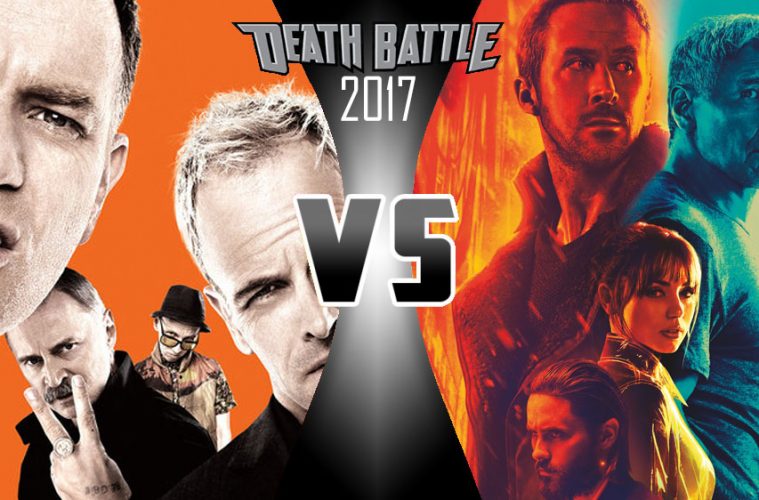 DUELING MOVIES 2017: THE BATTLE OF THE SEQUELS WE DIDN’T KNOW WE NEEDED

This year saw the release of two sequels coming decades after their originators. One was small-scale and focused more on character relationships and a banging soundtrack: Danny Boyle’s T2: Trainspotting – coming out 21 years after the hip, drug-fueled slice of life that defined late ’90s cinema. The other was a lush, colorful and gigantic follow-up to the quintessential dystopian vision of cyberpunk, Denis Villeneuve’s Blade Runner 2049 – a return to the landscape first unveiled 35 years ago in Ridley Scott’s cult classic. It reminds me of that Led Zeppelin song… “it’s been a long time, been a long time, been a long lonely lonely lonely lonely lonely time.” But thank god it took forever to get these sequels. Who would have thought 2017 would reward us with two of the best sequels we weren’t sure we wanted, nay, needed???

For T2: Trainspotting (a ridiculously self-aware title if there ever was one), it picks up right where the movie itself falls, 20 years later. Mark Renton (Ewan McGregor) returns to his Scottish hometown years after ripping his friends off from a heroin deal that was supposed to make them all “rich.” Spud (Ewen Bremner) is on the ropes, re-addicted to heroin, having lost his job and his family. Simon (Jonny Lee Miller) is taping cheating men and blackmailing them with the help of his partner, Veronika (Anjela Nedyalkova). And, then there’s Begbie (Robert Carlyle); none too happy with any of them, Renton especially, for the £4,000 he was denied from the drug deal way back when. Begbie breaks out of jail, partly to get back to his regular hooligan lifestyle, and partly, maybe, to track down Renton. What follows is nostalgia in its purest form, both for the characters and the movie’s viewers, tapping into what made Trainspotting so special in the first place. Fun, adventure, danger, loss and facing one’s demons in middle-age, all set to the best soundtrack of the year, hands down.

Blade Runner 2049 does a great job of picking up in the same universe as the original, without telling, directly, the same characters’ story. Deckard (Harrison Ford) is there but on the fringes. BR2049 is a Replicant’s story, as Ryan Gosling’s character, K, works a mystery that has far-reaching ramifications for what it means to be “more human than human.” In 2049, Replicants (bio-engineered androids) have now been integrated into society as slaves, sex workers and servants at large. As an LAPD “Blade Runner” who hunts rogue, dangerous Replicants, Gosling stumbles onto a conspiracy meant to cover-up and erase a “miracle,” one which involves finding Deckard and the missing puzzle piece to Dr. Tyrell’s legacy. More so than with T2: Trainspotting, BR2049 requires viewers to have seen and really dug into the original, in my opinion, to get at the themes the sequel is presenting. 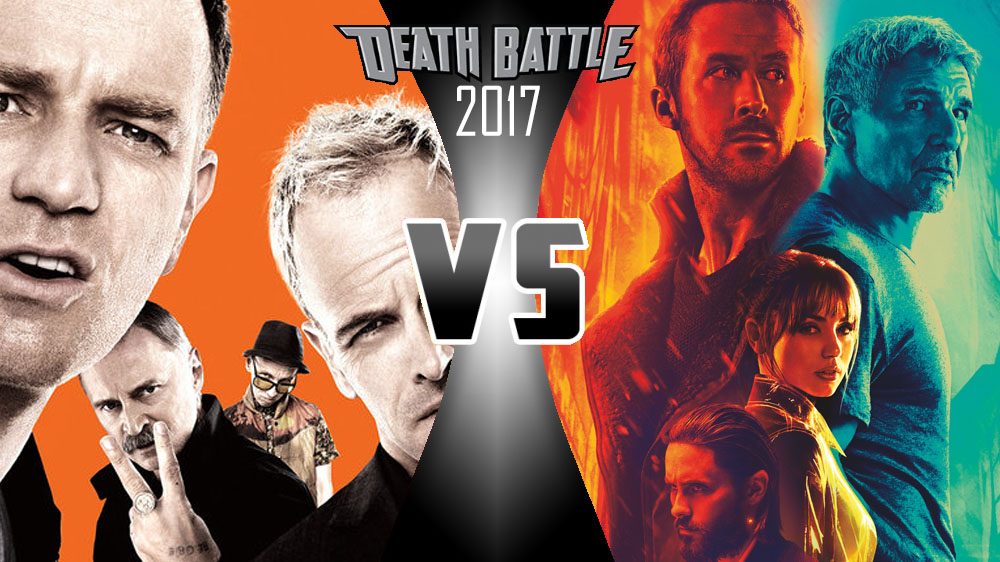 It is great seeing McGregor working with Danny Boyle again on T2, after their unceremonious falling out around 2000. The pair are vibrant and feed off each other’s originality on screen. I hope this is not just a fluke for the sake of a sequel. I hope they do more together soon. Renton is a sad character in some ways, bolstered by ego and guilt alike. McGregor constantly surprises, oscillating between subdued stress and gleeful inspiration. Having him play off of Bremner and Miller makes the whole outing worth the price of admission too. Bremner is the best part of T2. Heartbreaking and funny, Spud is the human bystander, made eventually into the movie’s meta-level storyteller. Miller is great and grimy in his attempts to fuck over McGregor, and Carlyle is even more volatile than in the first movie. Nedyalkova, new to the cast, is sexy, sly and frequently turns the mirror on the boys’ club juvenile behavior. Overall, one of the best ensembles of the year.

Blade Runner 2049 is no slouch either. Fronted by Gosling and Ford, and including Ana de Armas, Robin Wright, and Jared Leto, the talent speaks for itself. The movie is often interested more in the atmosphere, however. As a result, the dialogue is sparse in many scenes, boiled down to glances and body language. But, if you have a movie that calls for such acting, Gosling is a premium choice; he has had a lot of practice in Nicolas Winding Refn’s films. 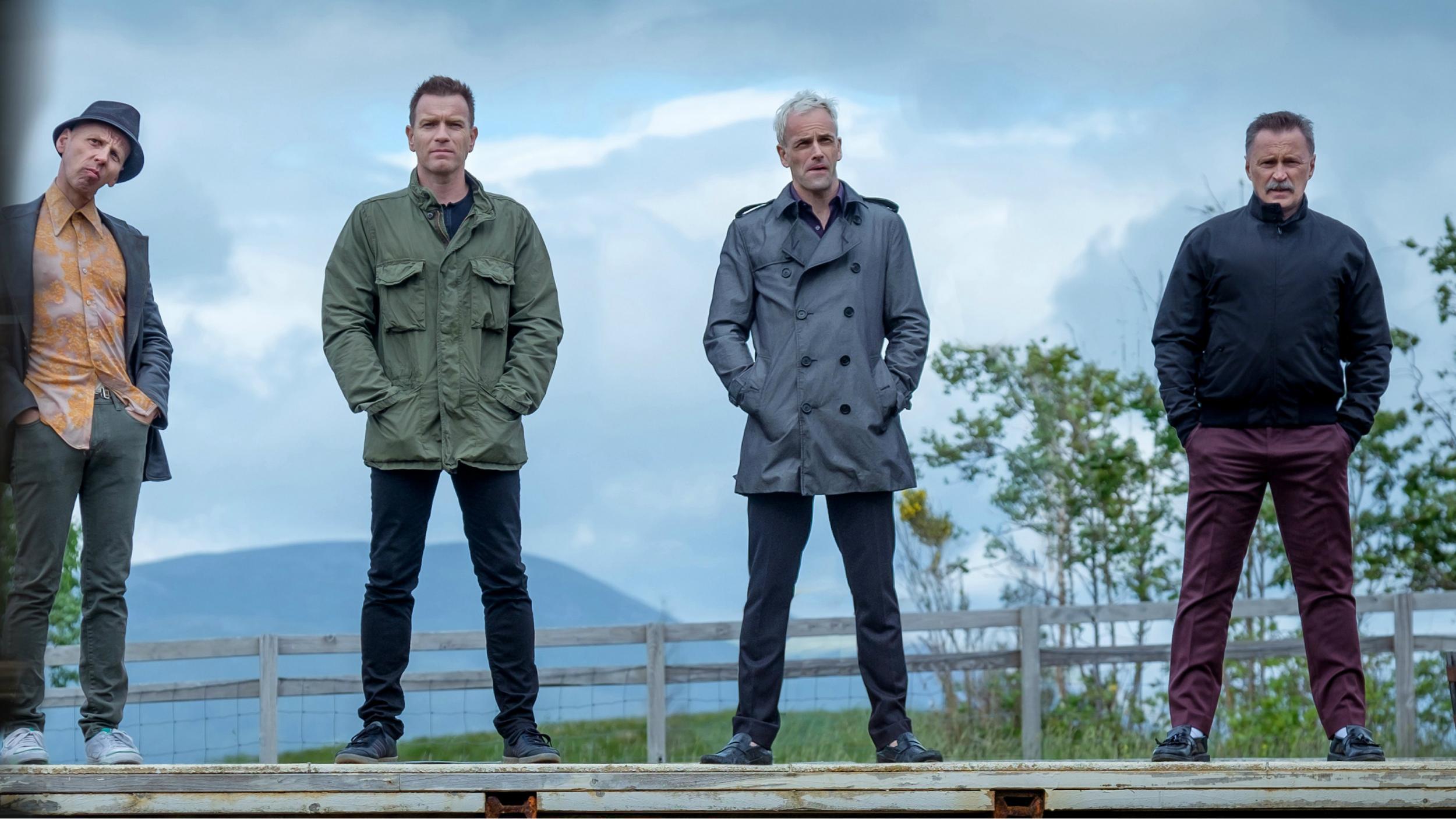 There’s a lot to like in T2: Trainspotting. The aforementioned relationships are one. Revisiting these characters in their 40s reveals a lot about their characters’ naïveté in their 20s; something that I think is reflected in the viewers, especially if you, like I, were part of the ’90s cinephile cult that obsessed over the original. We grow up, they grow up. (Yes, even Begbie.) That being said, Renton and Simon conning a pub of anti-Catholics for their bank cards had me raucously laughing. It was a great moment of “those kids are up to their old games.” Many would scoff if you said T2‘s soundtrack is as good or better than the original’s. It is. Tracks by Queen and Blondie are one thing, but the real discovery here is The Rubberbandits (DAD’S BEST FRIEND!), Young Fathers and Underworld. And, The Prodigy remix of “Lust for Life” creates one of the most cathartic and infinitely pleasurable endings of a sequel I’ve ever seen.

When it comes to Blade Runner 2049, there is no way we can talk about its virtues without mentioning the utterly beautiful world captured by cinematographer/God Roger Deakins. The reason I went to this movie was because of Deakins. The color, the shadow, the way the dude plays with light; it is a feast for the eyes. Villeneuve and the writers have really tapped into what makes a Blade Runner movie, for good and bad. For good, he gets the tone and characters right. He knows the universe well and stays true to its origins. I was surprised that my favorite parts of BR2049 were not even in connection with the main Deckard plot, but with K and his A.I. holographic girlfriend, Joi, played by Ana de Armas. Sexy, sad and exploring the themes of what is living and human, those scenes stayed with me long after the movie was over. 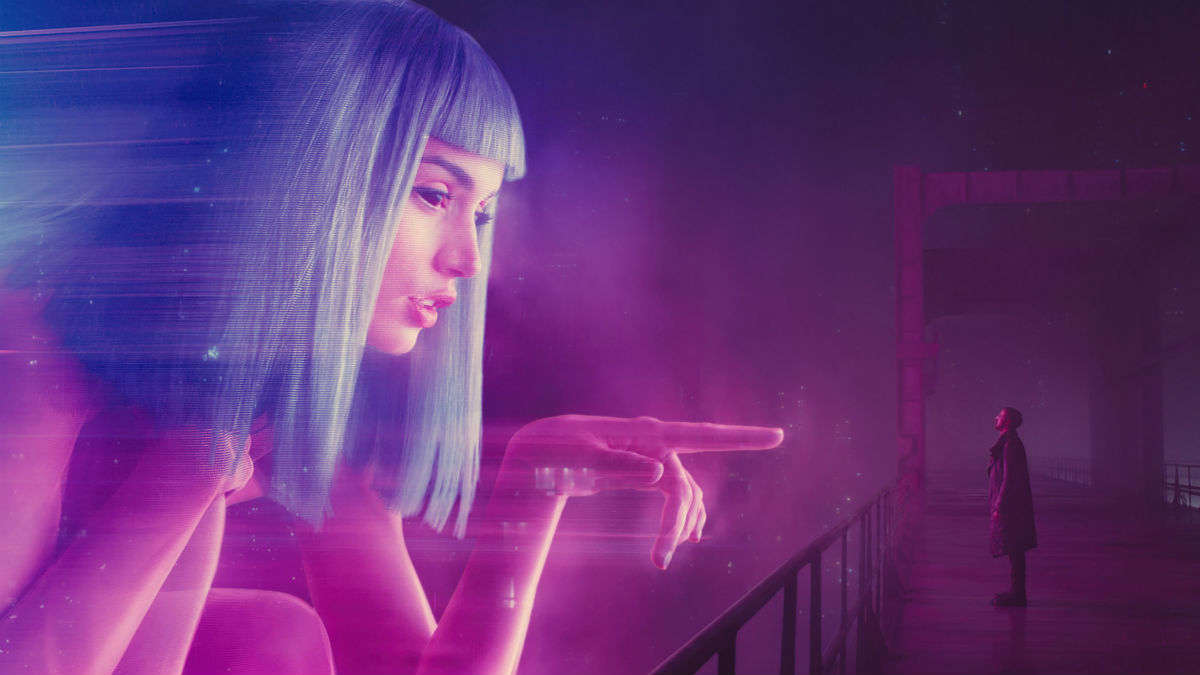 The most forced part of sequels is often the callbacks to the originals. You know, the thing producers think you have to include to give the longtime fans a nudge and a chuckle? Well, for me, the “Choose Life” reprise in T2: Trainspotting was one of the worst examples. Having Renton regurgitate the surface point and explain the specialness of a classic monologue does more than make the subtext text. It takes all the air out of the room. It brings everything to a dead stop just to include the new viewers in the audience. Honestly, there had to be a better way to handle this part, and it is the only real flaw I see with T2.

It is too long.

Like I said previously, Villeneuve, Fancher, Green & company stay true to the original, even to a fault. The sequel has the same pacing as the original, and that is to say, it is slow, slow, slow. This is coming from someone who loves slow burns, so you know if I am saying it, it is a detriment. The movie would have worked better 40 minutes shorter, especially when 60% of it is dialogue-less. Then again, if you wanted to make a case for “living” in that world for as long as you can, then go ahead, be my guest. It is lush and wonderful. Swim in it. 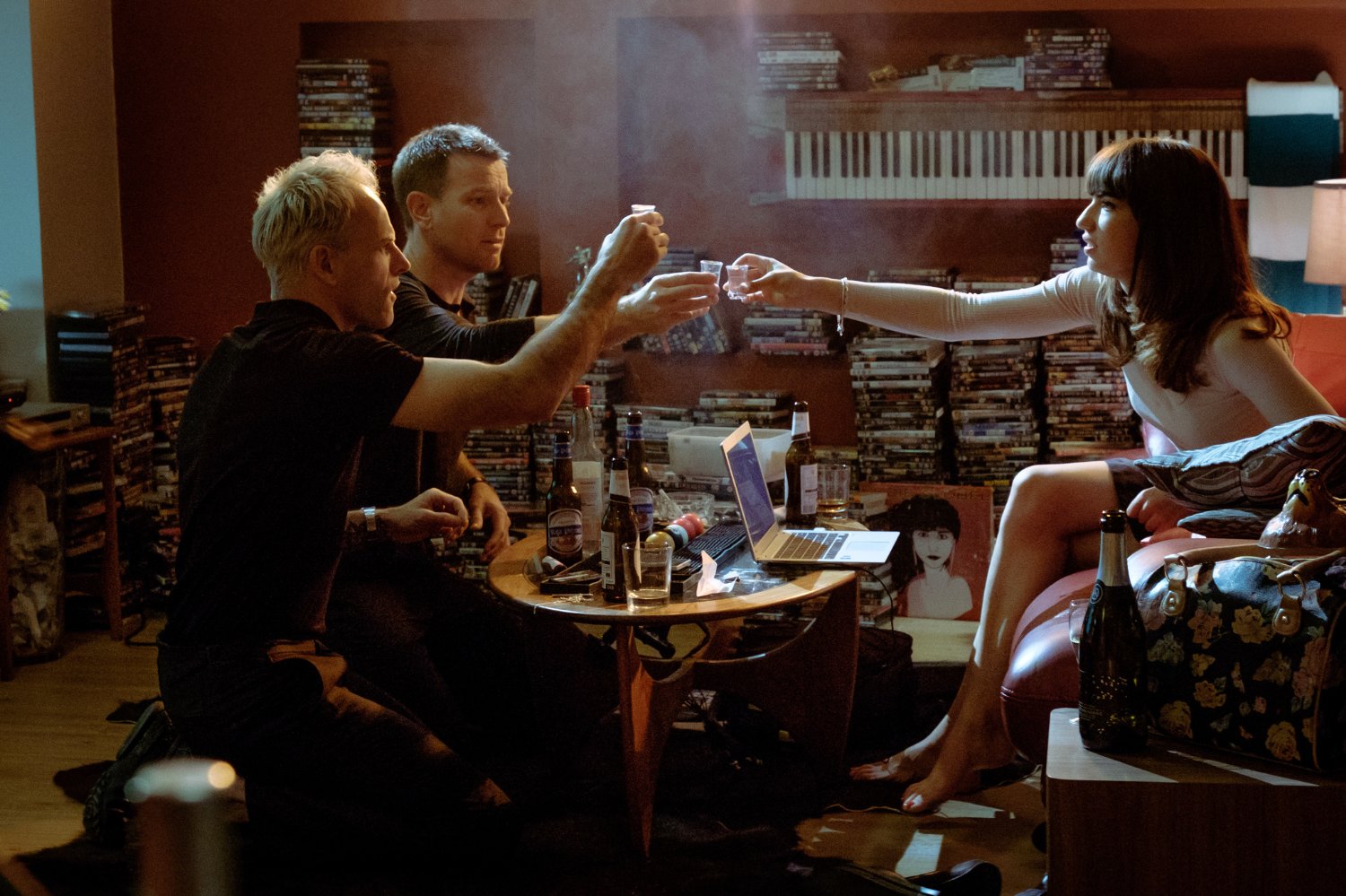 My vote for who wins the “Best Sequel to Come Out Decades After the Original” goes to T2: Trainspotting. That is not to say Blade Runner 2049 is bad. Even with its pacing flaw, BR2049 is probably the truest continuation between the two. It captures everything that the 1982 film created, or even hinted at but could not show because of technological limitations. What T2 gets right, however, is character growth on screen, something we rarely see outside of Richard Linklater’s Before series and the Up series of documentaries; how people change and stay the same, how they age, captured in cinema. BR2049 is more beautiful, but T2‘s characters stay with you long after the fact, mixing one’s own nostalgia with that of a fictional world.