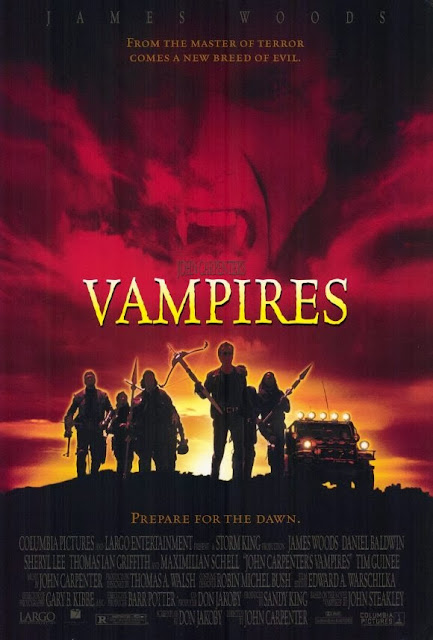 During Halloween weekend of 1998, I decided to go to the movies and catch a film. Initially, I saw Rush Hour starring Chris Tucker. While the film had plenty of action and left me laughing for days, the night was still young. When the movie was over, I remembered there was time to see this rated-R vampire movie featuring James Woods that I saw advertised days earlier on TV. It was Halloween, looked scary and I kind of wanted the thrill of sneaking into a movie and not getting caught. As I was 15 at the time, I went ahead full-throttle and all went according to plan. Upon initial viewing of this film, it had me frightened and intrigued at its fusion of theology, vampire lore, killing scenes and modern-day world weariness. Subsequent viewings in later years yielded a newer perspective from what I had learned about John Carpenter and the background of the movie. In those times, I had been upholding this film as the last good vampire film before Twilight rendered vampire characters as emo, sissified romantics. After watching this film yesterday, I maintain it’s better than Twilight, but I now I look at it as more of a derivative slasher flick that fails in its attempts for cohesion, but left something of a legacy nonetheless.

Based on John Steakley’s 1990 horror novel, Vampire$, Carpenter’s adaptation takes place in various small ghost towns in New Mexico. A crack-team of mercenary vampire hunters led by Jack Crow (James Woods) enters an empty house on a mission to kill a nest of vampires. Crow and his team are financially supported directly by the Vatican and even include a Catholic priest as a liaison and spiritual source. After clearing the house of vampires but not finding the master (think “queen bee”), they celebrate at a motel with copious amounts of alcohol and prostitutes. The name of the motel, Sun God, gives away the villain’s motive, by the way.

While celebrating, the master vampire that the team missed earlier appears at dusk and makes his way to the motel. The master’s name is Jan Valek (played by Thomas Ian Griffith) and is revealed to be a former Catholic priest from 600 years prior who rebelled against the church, was tried for heresy and subjected to an exorcism that transformed him to the first vampire in recorded history. As such, he is more powerful than any master previously encountered. Before going into a killing rampage, he bites a prostitute named Katrina (Sheryl Lee). Crow and his second in command Tony Montoya (Daniel Baldwin) escape with Katrina. They spend the rest of the movie taking advantage of Katrina’s vampire bite to track down Valek and destroy him for good. But, along the way, Crow, Montoya and their new priest, Father Adam (Tim Guinee) encounter betrayal from within and more vampires.

James Woods is an actor who can hold his own, no doubt. What makes the film now somewhat interesting is his trademark rapid-fire, seemingly coke-induced tirades and one-liners packaged with frequent and elaborate profanity. His back story as Crow is that of a boy who was hardened through a rite-of-passage of being forced to kill his vampire parents. Woods plays him with this element in full-motion, but adds a good modicum of dark humor to Crow. It’s also fun to watch him stab a vampire repeatedly while cursing them to die. Thomas Ian Griffith has a very frightening visage as Jan Valek. Described as possesing “superhuman strength, unkillable, like a machine“, this role made me forget that Griffith ever played Terry Silver in the near-abysmal The Karate Kid Part III. Sheryl Lee is the only female in the movie. Her character is half-dead for most of the film, which is kind of a step-up from her most famous role (as a corpse on Twin Peaks). As for Daniel Baldwin? This is the only role I remember him in. Same goes for any actor in his family whose name ISN’T “Alec”. 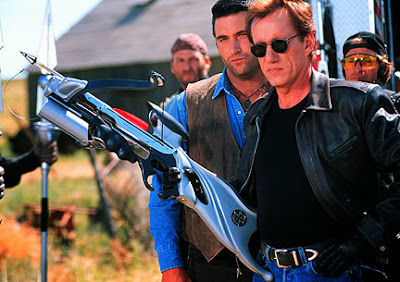 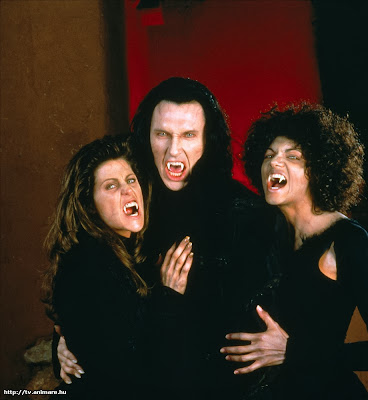 Is it Action A Go Go or Action A No No?

15 years ago, I would’ve nodded in the affirmative. While this film has plenty of blood, guts, gore and explosions (mostly spontaneous, if you catch my drift), it’s an incoherent mess. I never read the novel on which this is the basis, but the film doesn’t know which direction in wants to take. Carpenter’s known for injecting some level of social commentary in his films (Starman and They Live come to mind), but I couldn’t discern how he was taking aim at the Catholic Church, if at all. One could argue that the vampires spawned by the church are allegories for the predators resulting from the sex scandal that the would become widespread knowledge several years later, but that sounds too conspiratorial. Also, the level of misogyny in the film is quite rampant. Apart from the prostitutes and female vampires, the only prominent female character is Katrina played by Sheryl Lee. Her character is subjected to gender-disparaging treatment that constitutes verbal and physical abuse. Woods’ and Baldwin’s characters mistreat her and until the latter grows something that resembles something that looks like a change of heart. Male ruggedness seems to be a theme as Woods’ Crow has a tendency to bully anything not falling into his definition of masculine (watch how he treats Father Adam).

Also, they mention in the film that religious iconography and silver are ineffective against vampires and that you should “forget whatever you’ve seen in the movies“. Sunlight and the ol’ wooden-stake-through-the-heart trick are the only two ways to kill a vampire for sure. I find this peculiar since the protagonists spend most of the movie using ineffective live rounds against vampires. In retrospect, the vampires are like the zombies on AMC’s The Walking Dead: Once bitten, they lose all sense of who they were and now live only to feed. Crow and his mercenary team of vampire hunters have elements from Marvel Comics’ Nightstalkers. Additionally, the legacy left behind by this film led to Marvel including a parody of the movie’s poster as part of one its vampire-themed X-Men storylines back in 2010. I find this film to be less scary now and find myself laughing at most of the occurrences. I vote Action A No No, but check out the massacre below: