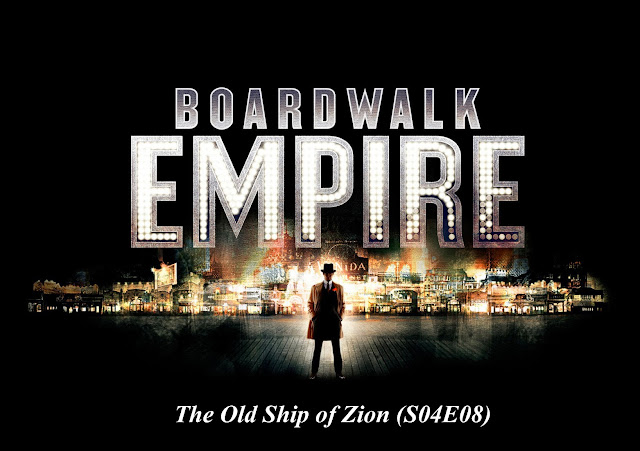 Opportunity: noun   op·por·tu·ni·ty   Pronounced: /äpərˈt(y)o͞onitē/
1.) A good chance for advancement or progress.
2.) A set of circumstances that makes it possible to do something.
3.) An attempt to save one’s own skin.
However you choose to view it, the events in last night’s Boardwalk Empire all fall under at least one of the listed definitions above. The title of the episode is actually that of an old Christian hymn about salvation. The underlying message is “save yourself”. And while that hymn was sung several times throughout, its meaning became distorted by the end of the episode. 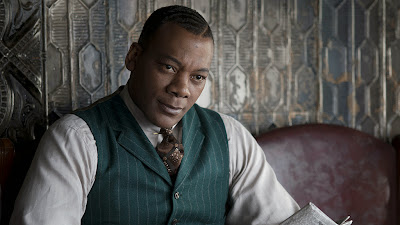 Dunn Purnsley, the Bawlmer career criminal, starts of the episode by entering what appears to be a Prohibition-era version of a crack house. There are fiends laying around everywhere consuming heroin. Purnsley collects a large sum of money from the house ‘manager’ and hands him a flyer for Dr. Narcisse’s stage play in Harlem for later. At the church funeral service for the deacon killed by Purnsley during last week’s episode, Daughter Maitland gives the first rendition of the titular hymn. During which, both Chalky White and Dr. Narcisse are present. Chalky is clearly uncomfortable with the sneering looks both him and his family are receiving from fellow congregants. His nervousness makes a transition to his trademark seething scowl when Narcisse shoots him a look that has smugness written all over it. Chalky talks with Purnsley after the funeral and asks him pointed questions that betray to the audience Chalky’s knowledge of Purnsley’s alliance with the good doctor. First he takes him to the crack house from earlier, where Chalky and his group rough people up looking for information about who runs the place. Seizing an opportunity to conceal his tracks, Purnsley kills the manager before he could say anything. From him, Chalky finds money and bricks of uncut heroin. In what I presume to be a nod to his famed character of Omar Little from The Wire, Michael Kenneth Williams (as Chalky, of course) travels to Harlem where Narcisse is conducting his stage play. He publicly interrupts the play and offers the people an alternative: “Harlem by Torchlight”. With that, he burns the heroin and the money in full view of at least 30 people. Chalky seized this opportunity to challenge Narcisse and is reveling in it. While they both hold stone-cold gazes at each other, Narcisse is visibly disturbed.

In retaliation, he asks Daughter to keep Chalky around for longer than their trysts usually last. He tells her to keep him around for “another visitor”. That visitor happens to be Purnsley, who arrives while Daughter is singing the “The Old Ship of Zion” to Chalky as some form of post-coital bliss, I imagine. He tries to garner more favor with Mr. White by suggesting they expose Narcisse, but Chalky proves to be too smart and reveals his awareness of his second-in-command’s duplicity. They fight, and just when Purnsley has the upper-hand, he gets stabbed in the back….literally. By Daughter. Maybe she kills him because she didn’t want to be part of Narcisse’s manipulations any longer or maybe she’s developed feelings for Chalky. Either way, she took a chance and has now made herself a target. 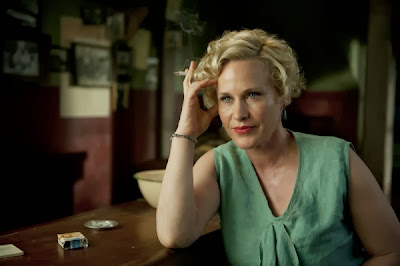 Sally Wheet exemplifies the term “opportunist” this week. Arriving at Nucky Thompson’s Pennsylvania brewery manned by his associate Mickey Doyle (Paul Sparks), she maintains that she is only overseeing their business relationship, nothing more. Prior to her arrival with several fruit produce trucks smuggling liquor, Mickey is giving an anecdote that no one is amused by. Nucky dismisses him (mirroring Agent Knox in an earlier scene, but later for that). Nucky is also disturbed by Mickey brandishing around the cane of his deceased manservant, Eddie Kessler. When Nucky asks Sally why she traveled all the way from Florida to Atlantic City, she merely replies “I didn’t stop to think about it”. Along the way, she provides Nucky two opportunities:
1.) To remind Mickey of his place, take back Eddie’s cane, and basically punk/dismiss him as he tries to flirt with Sally.
2.) By doing so, he and Sally have another rough-sex romp.
Through Sally, Nucky’s nephew Willie Thompson finds his calling now that he’s a borderline-homeless college dropout: The family business of politics. Before she leaves, she takes another opportunity and hustles Nucky for an extra $500. 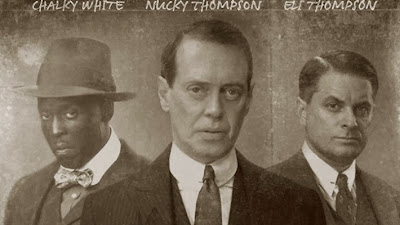 Willie Thompson wants to engage in the family business and Nucky reluctantly complies. First, he meets with Ed Bader (mayor of Atlantic City). The mayor is concerned about losing the Black vote in the wake of the deacon’s death. Nucky agrees to talk to Chalky to see what can be done. In the end, Willie decides to work for Bader. Nucky supports the decision, but strongly encourages his nephew to think independently and choose his own destiny. He gives him a book of wisdom as a gift.

But, unbeknownst to the young Thompson, Agent Knox (or rather Agent Jim Tolliver) is a bloodhound of an FBI Agent. He takes charge of an FBI meeting and scolds his team for discussing irrelevant anecdotes. He tells his agents that they can all go back to fraud cases if they don’t want to take down organized crime. One agent gives an anecdote about Willie Thompson’s criminal case before leaving the room to “go back to the land of fraud cases”. Knox then travels to a prison and visits Clayton Davies, Willie’s imprisoned roommate. He bribes Clayton with several packs of Chesterfield cigarettes to corroborate the anecdote from earlier. He then meets Eli Thompson in a diner. He and another agent covertly corner Eli in a booth and tell him they know all about Willie’s involvement in the poisoning of that student from earlier episodes this season. They give him an ultimatum: Give them Nucky on a silver platter and Willie stays out of jail. To make matters worse, this news arrives shortly before Eli arrives home to Willie apologizing and humbly pleading for his father’s forgiveness. Eli reciprocates and all seems right in the Thompson household again. Nucky does not know of the latest federal development against him, even as the episode fades to black with a clearly torn Eli.

Everyone gets what they want by taking advantage of opportunities. Some are careful like Sally Wheet, others seem irrespective of the consequences, like Daughter. Even Nucky takes the opportunity to show some respect for the dead through his actions towards Mickey. Everyone except Eli. He has a chance to save his son, but only if he gives up his brother. Some choice. Chalky’s show of defiance to Narcisse was also fun to watch. Now that it’s escalated, I can’t help but to think that all involved in that storyline will end up as casualties. Carpe diem.
Grade: B+
Written by Sy Shackleford (sylar10)
Sy L. Shackleford is a jack-of-all-trades columnist for Action A Go Go. A UConn graduate with a degree in both psychology and communication sciences, he is a walking encyclopedic repository for all things Marvel Comics, hip-hop, et. al. He also writes reviews for hip-hop albums which can be viewed on his Facebook page at https://www.facebook.com/sy.shackleford