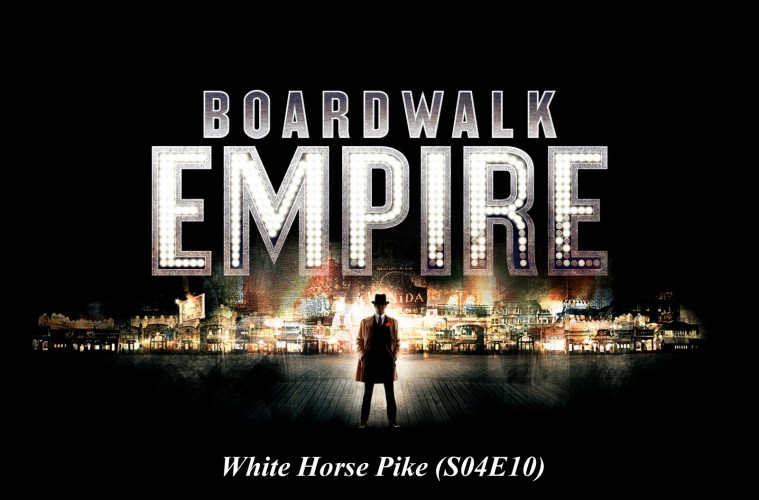 The title of an episode of a television series is supposed to be indicative of what a viewer can expect in terms of characterizations and action. It also expresses the idea of the writer(s) in a brief fashion. And while a connubial theme was prevalent in nearly every corner in Sunday’s episode of Boardwalk Empire, I believe the title was misleading. Entitling the episode “Marriage and Hunting” was inaccurate: It should’ve been called “Van Alden”.

RECAP: The episode starts with Chicago ‘florist’ George Mueller (b/k/a Nelson Van Alden, portrayed by Michael Shannon) trying to remedy the plumbing problems in his home. His wife Sigrid (played by Christianne Seidel) cradles their crying son which only adds to her husband’s stress. They don’t have the money to fix the plumbing, but Sigrid lets him know that she knows about his side-jobs for Irish mobster Dean O’Bannion (Arron Shiver). She basically tells George that “if he paid you, we’d
have no problems“. We’ll get back to that storyline soon. Meanwhile…


Nucky Thompson wants to mediate Chalky White’s escalating conflict with Dr. Narcisse. He seems to know about Chalky’s affair with Daughter Maitland. When Nucky tells him, in so few words, to not @#$% where you eat, Chalky seems to flare up and interprets Nucky’s words as down-talking, as if he’s not being talked to as an equal despite his clout with business and the community (waning as it is, though). Nucky later meets with his brother Eli to discuss the best possible course of action in regards to the White/Narcisse conflict. Nucky informs Eli that Chalky killed Mr. Purnsley in last week’s episode. Shortly, the conversation enters the realm of family. When asked about Willie Thompson, Eli claims that everyone in his household is thrilled that he’s home. It’s clear from his facial expression that Agent Knox’s ultimatum weighs heavily on his mind.

Arnold Rothstein appears to be going broke, either from gambling or bad investments (the Stock Market crash of 1929 is close). In desperation, he attempts to sell a life insurance policy on bootlegger Mickey Doyle to Nucky. Basically, Arnie wants Mickey killed, with Nucky being the beneficiary of the policy. Arnie wants 20%, to which Nucky agrees. 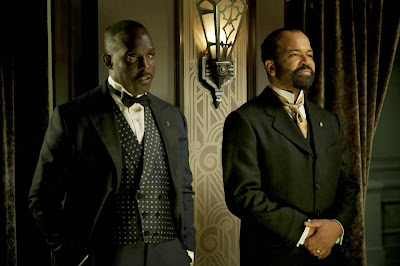 In Chalky’s household, marital discord is in the air. His wife seems to sense his infidelities, given her cold and taciturn attitude to her husband. They’re preparing a dinner party, but Mr. White has his head elsewhere. That somewhere is with Daughter, who is being questioned by Narcisse for her actions in the end of last week’s episode. She lies, he knows it and seems to be tearfully hurt. He beats her so badly that she’s bedridden with a near-unrecognizable face (Told ya last week that there’d be consequences). Chalky gets word of this and leaves his home in the middle of the party. He visits Daughter to find out what happened and goes to confront Narcisse (who earlier is attempting to make a heroin deal with NYC mobster Joe Masseria). He finds him at the club in the Whites-Only section with Nucky. He speaks of his revulsion for the for the minstrel show stage comedy and how Chalky’s “days are numbered”. On cue, Chalky shows up demands that Narcisse try to beat him as well. Nucky manages to talk him out of his aggression, but he still leaves in a huff-n-puff. Chalky then goes back to comfort Daughter when his own daughter finds him. She rightly suspects that her father is having an affair, she semi-inquires but then walks away in exasperation. 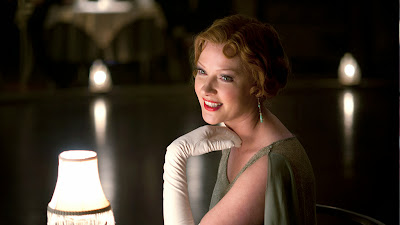 Gillian Darmody’s storyline has reached Act II at this point. On the Boardwalk, she tells Roy Phillips about her early start as a prostitute, how she ended up with the Commodore (basically, the biggest pimp in AC at the time) and the birth of her and the Commodore’s son, Jimmy Darmody. She tells Roy about Jimmy’s death, but lies about what actually happened. She tells him a doctored version of what we saw in the last season, in which she administered a heroin overdose to a young man who strongly resembled her son. Later, she’s in court trying to regain custody of her grandson, Tommy, from Julia and Paul Sagorsky. When Richard Harrow enters the courtroom to support Julia and Paul, his presence clearly unnerves Gillian. Julia gives her own testimony, her father supports her, but the judge implies that she may not gain custody since she is neither a blood-relative to Tommy, nor is she married. At their household, Julia asks Richard about his conversations with her father. Then she harks back to earlier in court. Out of the blue, she asks Richard to marry her. He accepts her proposal and they later go to make it legit (“It’s just a hunting license, right?“, he says). After officially getting eloped, Richard makes his way to Nucky and Eli Thompson, asking if he could have a job. Elsewhere, Gillian may be relapsing into heroin when she walks in on Roy having a mysterious telephone conversation. They way his voice changes when Gillian walks in the room, it’s clear he’s talking to someone he doesn’t want her to know about.

At the end of the episode, Nucky calls Sally Wheet in Florida to talk about the weather (seems like a metaphor for phone sex). He wants someone to connect with obviously. When it’s over, she goes back to bed. However, she keeps the light on and arms herself with a shotgun and a lit cigarette.

But, it’s not over. Van Alden’s part is crucial to the episode this week. When he arrives at work, O’Bannion questions his loyalty. He asks him about “the day you were with the Capones“. He then gives him a delivery to make. In the window of O’Bannion’s floral shop, we see a badly-scarred man looking on. At the home of the Capones, Al and his brother try to bully and intimidate Van Alden, but he stands up to them. He offers to kill O’Bannion himself for $1,000. On his way to do the deed, he gets ambushed by the scarred man and two other goons in an alley. Phil, the man with the scar, wants revenge on Van Alden for scalding him with a hot iron last season:

He asks and then warns them to stop beating on him. When they don’t relent, he flips the script on his attackers, pulls out a gun and kills all three assailants. O’Bannion, later that night in the shop, puts a gun on him. But again, Van Alden gains the upper hand when he menacingly tells Dean about his past as a Prohibition agent and his true identity. O’Bannion backs off, goes to the register where three mobsters shoot him to death. Afterwards, Van Alden comes out of the back, takes money from the register and leaves. He returns home to his wife with money and atypical sexual aggression.

MY THOUGHTS: This is the episode I’ve enjoyed the most in this season so far. Not to take away from anyone else, but Michael Shannon’s Van Alden owned this episode. His character has always been repressed, but now he’s showed us a sliver of what he’s capable of when he breaks out of the box. This week, he went from grumpy husband to the kind of killer that Shannon portrayed in 2012’s The Iceman. His personality shifts were well-played in this episode. He provides for his family, yes. But he’s most alive when he’s taking what’s his and not taking crap from anyone. His actions and more assertive-personality change are comparable to archetypes like Breaking Bad‘s Walter White/Heisenberg or Heroes‘ Gabriel Gray/Sylar.

Richard Harrow’s return to Nucky’s service may be a way of keeping the character interesting and involved. Harrow is a trained expert killer, but domestic living is exacerbating the damage that his skill-set has already wreaked upon his conscience. In spite of all this, I want the character to have a happy ending with Julia and Tommy. But, inject a dose of art-imitating-reality, and anything can happen.

I would really like to see Narcisse and Chalky White have a good ol’ fashioned American street fight. Jeffrey Wright and Michael K. Williams play African-American foils to a hilt with a subtle nuance (especially Wright). With three episodes left in the season, I don’t want to be disappointed by the escalating pay-off.

Best quote of the episode:

[In regards to the plumbing]
Van Alden: Yes, I spoke with Mr. Roebuck himself. He apologized profusely and told me he would send a dozen of his top men over immediately to remedy the situation to our total satisfaction.
Sigrid: This is true?
Van Alden: No, this is sarcasm! *walks away*


Sy L. Shackleford is a jack-of-all-trades columnist for Action A Go Go. A UConn graduate with a degree in both psychology and communication sciences, he is a walking encyclopedic repository for all things Marvel Comics, hip-hop, et. al. He also writes reviews for hip-hop albums which can be viewed on his Facebook page at https://www.facebook.com/sy.shackleford 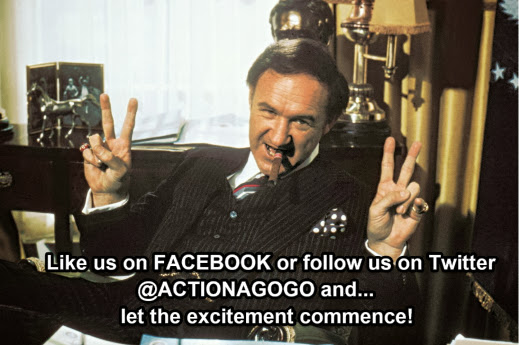