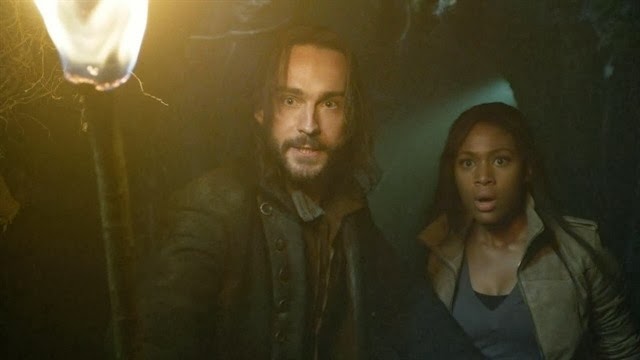 Huh, well that’s two-for-two for Sleepy Hollow.
I’m gonna be honest with you, I really enjoyed Blood Moon. Is it kind of a mess? Sure. But so was the pilot and I ended up enjoying that in spite of it’s flaws. Blood Moon continues to fill the series’ mythos with completely absurd additions but manages to make them a bit more palatable for the audience’s sake. And the elements I enjoyed the most from last week are featured even more prominently in this episode, proving that the pilot episode wasn’t a happy fluke.
Blood Moon works mostly for one simple reason: it’s scary. It is very, very scary. The horror elements we caught only promising glimpses of in the pilot are on full display here, and let me tell you they are far more effective than anything you’ve seen on TV anytime recently. Thanks to some skillful direction and some rather unsettling work by the make-up department, this week’s case-of-the-week is not the boring throwaway narrative we often see in second episodes. Will it have any real significance to the plot down the road? I seriously doubt it, but this is a case of taking an isolated story and really committing to it and making it work.
In Blood Moon, Abby and Ichabod have settled into their respective roles as straight-laced cop and cooky oddity. Their dynamic flows much better in this one, which makes the rest of the season look much more promising. This week our apocalypse-fighting duo is investigating gruesome murders being committed by the very volatile spirit of a very angry witch who is in the process of being resurrected with the aid of a still-somehow-alive Andy Dunn (another surprising and welcome appearance by John Cho). Again, it’s here that I have to give a hand to the uncharacteristically high-caliber direction on this episode. The horror-oriented sequences look and feel cinematic in quality, and the jump scares could hold their own against most of the horror films making it into theaters these days, let alone anything on television. The witch herself, Serilda, is an impressive feat of visual-effects work, American Horror Story should be taking notes. 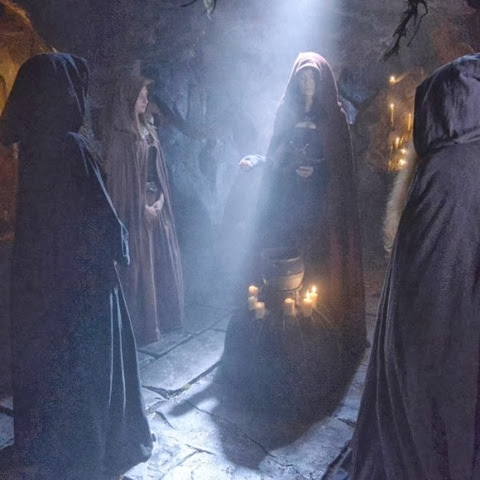 The story itself unfolds in a manner reminiscent of Fringe, and unlike in my review of Agents of SHIELD, I mean that as a compliment. The mix of legitimate horror with tongue-and-cheek elements and a few doses of humor strike a good balance that makes the more convoluted elements excusable for the most part, very much like Fringe. Understand that this show is not yet quite at the level of that one, but this episode puts it somewhere in the same ballpark and that’s a promising sign.
Not everything works, of course, Sleepy Hollow is no marvel in the area of writing. Not all the dialogue rings true, the story’s structure is rigid to the point that it begins to strangle the narrative instead supporting it. Each plot revelation drops as if on cue as an excuse to move into the next act, the obviousness of it somewhat dulls the mystery of the story at hand. Format is one thing, but viewing becomes rather tedious when it’s used as a crutch rather than an enhancement. It’s also easy to predict where each sequence will lead, which defuses some of the tension that was built up so well by the direction. One major issue that I see becoming a problem further down the road is the lack of established rules as to how the spirits and demons in the show work. Their powers seem to exist for the plot’s convenience, rather than making any real kind of sense. If the writers fail to lay down some parameters as to what these things can and cannot do early enough in the series, they may end up contradicting themselves in some unfortunate ways later on. Such is the problem with lack of forethought when it comes to mythology-based shows such as these.
That all being said, Blood Moon is a reassuring continuation of a surprisingly enjoyable series. Will it stay strong? Will it all fall apart within an episode or two? Either one is entirely possible by my estimation. But given the lack of good new dramas this season, it’s nice to have something to genuinely look forward to next week. For all I know, Sleepy Hollow could become the new Fringe. And there are far worse things it could aspire to be.
Grade: B