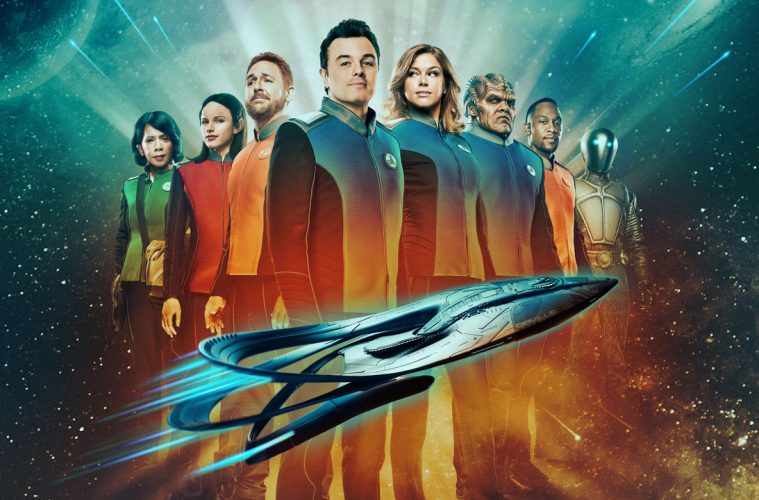 THE NIGHT SHIFT: TAKING A LOOK AT THE ORVILLE

I’ve never been a fan of Seth Macfarlane, let me say that right now. I don’t know what it is about his stuff, from Family Guy to The Cleveland Show and even Ted, nothing he has done has ever worked for me. I love a dick joke as much as the next person, but something about his style of comedy just rubs me up the wrong way. If I had to hazard a guess as to why it would be that his comedic stylings are clearly just too low brow for my sophisticated, British sense of humour.

What I am a big fan of? Is Star Trek. I would watch Star Trek: TOS with my dad as a child, along with the movies. I was nearly 8 when Star Trek: TNG first aired in the UK and it very quickly became a staple of family viewing in our household, the same happened with Star Trek: DS9. My Star Trek dorkiness is at the level where I can fairly efficiently insult someone in Klingon, and I’m not ashamed to admit it. Star Trek, along with other great sci-fi TV shows like Alien Nation and The X-Files, helped to shape who I am. There’s a sincerity and idealism in Star Trek that makes it great viewing with kids and, like a lot of great sci-fi, Star Trek used great storytelling to examine some very serious issues that were, and still are, relevant in real life. 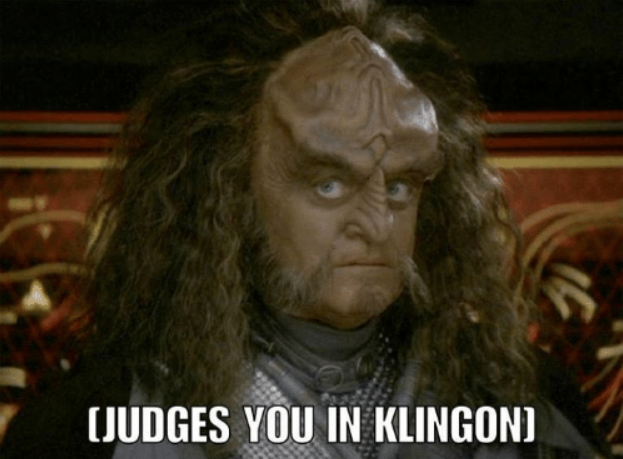 Unfortunately, for me at least, Star Trek seemed to lose its way when Star Trek: Voyager came along, and has only gotten worse. Great characters and clever, well executed stories have been increasingly replaced with empty, vacuous caricatures and blatant, heavy-handed moralising. Something that I am sad to say has culminated in Star Trek: Discovery, an incarnation of Star Trek which manages not only to crap all over established canon, but to set a new standard for unlikable, shallow characters.

Not being satisfied with that Star Trek: Discovery also succeeds in fundamentally betraying everything Star Trek was supposed to be, the best that our species has the potential to become exploring space in an optimistic and hopeful future. The universe of Discovery, where everything is badly lit and everyone is weak, an asshole, or both, is not one that ANYBODY would want to live in. While a darker, edgier take on The Federation may have been interesting if done with intelligence and skill? Star Trek: Discovery is massively sanctimonious, and has all the charm and subtlety of a brick to the face. 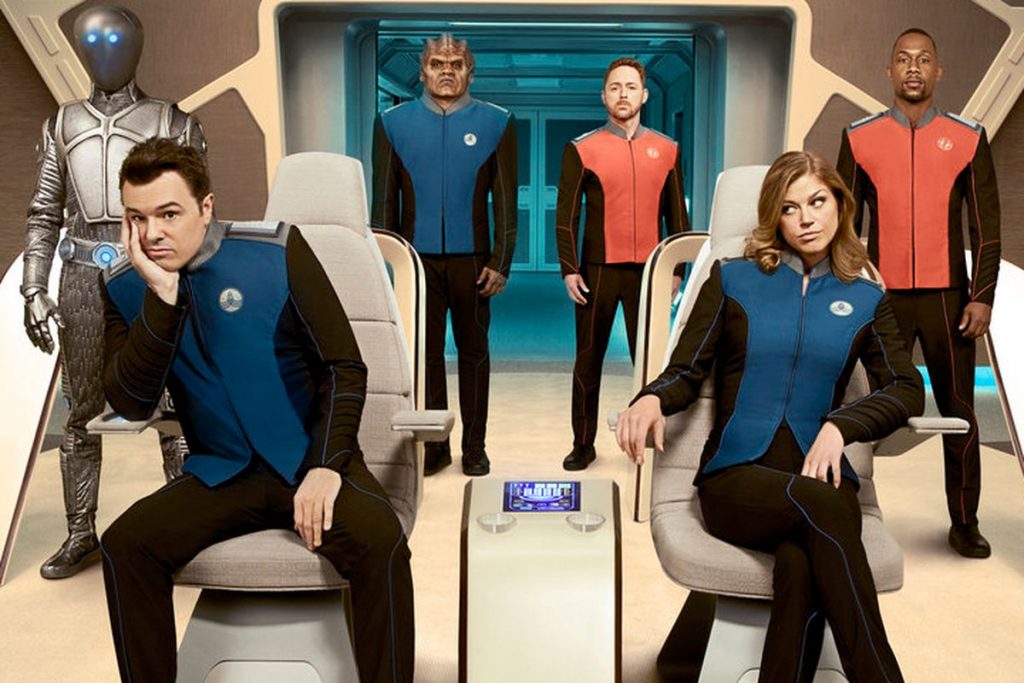 At the same time Star Trek: Discovery was disappointing fans Seth Macfarlane brought us The Orville, a comedy drama that was originally billed as a Galaxy Quest style parody of Star Trek (hence the inevitable comparisons with Discovery) Despite my dismay at the failings of Star Trek: Discovery I avoided watching The Orville for a while, mostly because of the aforementioned dislike of Macfarlane’s other work. However, I couldn’t avoid hearing mentions of The Orville, and the dissonance between enthusiastic viewers telling me to watch the show and snarky critics telling me to avoid it was, to quote a certain Vulcan, fascinating. So I put aside my Macfarlane disdain, and gave The Orville a shot, not really expecting an awful lot but daring to hope that I would at least be mildly entertained.

And you know what? I think I may have found my missing Star Trek. 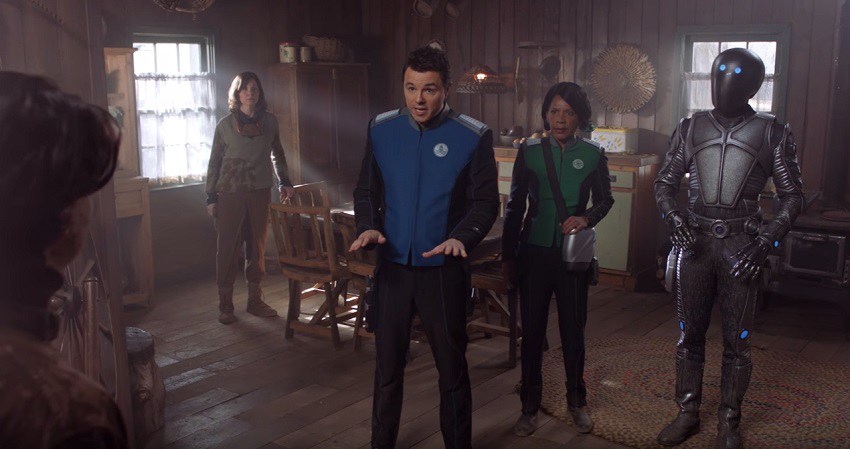 Very obviously taking the bulk of its inspiration from Star Trek: TNG, The Orville is basically what you get when a huge Star Trek dork, like Macfarlane, has the Hollywood influence to get financial backing for a show based on their sci-fi D&D game. Although it was sold as similar in style to Galaxy Quest I personally wouldn’t say that was accurate. In terms of storytelling, visual style, and episode structure it’s more like a Star Trek: TNG fanfiction where the drama and comedy ratios have been swapped. It’s not that Star Trek couldn’t be funny, it could, it’s more that the central focus of the show was the drama, with touches of humour being mixed in at various times. The Orville is designed to be comedic, but in a way that reverently homages Star Trek, rather than pokes fun at it. It’s pretty obvious that some of the people working on this show have also worked on Star Trek. TNG star Johnathan Frakes directs an episode, and the composer for the show is John Debney, who also wrote the scores for TNG and DS9. The Orville does amusingly highlight some of the cornier Star Trek tropes, and at times in quite a subtle way, such as the inclusion of modern pop culture references which include Destiny’s Child and Seinfeld. While this may seem strange, and slightly jarring, it is no doubt a nod to the liberal use of classical music and Shakespeare in Star Trek: TNG, music and literature hundreds of years old in the shows 24th century setting. 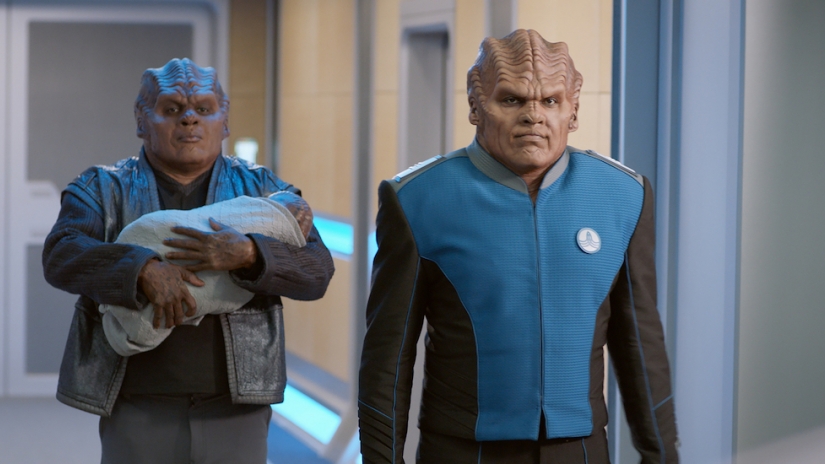 However, The Orville is not just about having a laugh while messing about in space, there’s some real drama in there too. The first two episodes did a nice little job of establishing the setting and characters, while being diverting enough to get my interest. But it was episode three ‘About A Girl’ that really made me sit up and pay attention. The episode concerns the newly hatched child of Lt. Commander Bortus and his mate Klyden. I won’t spoil it here, but it is a wonderful and nuanced story about gender politics, cultural differences, and ethics. Conversations among the crew in which they question themselves and their perspectives about the situation, and the scenes between Bortus and Klyden as they try to decide what is best for their child, are pure Star Trek. Other standout episodes include ‘If The Stars Should Appear’, which takes a look at intolerance, ‘Majority Rule’, which covers trial by social media, and ‘Into The Fold’, which is a classic ‘boy and his robot’ style story. Serious subjects are given the gravitas they deserve, and I’d say the show has some serious balls in tackling such relevant but hugely controversial topics within the first season. There are some truly touching, thought provoking, and awe-inspiring moments in The Orville, and the characters are a lot more relatable than the smug, joyless inhabitants of Star Trek: Discovery. 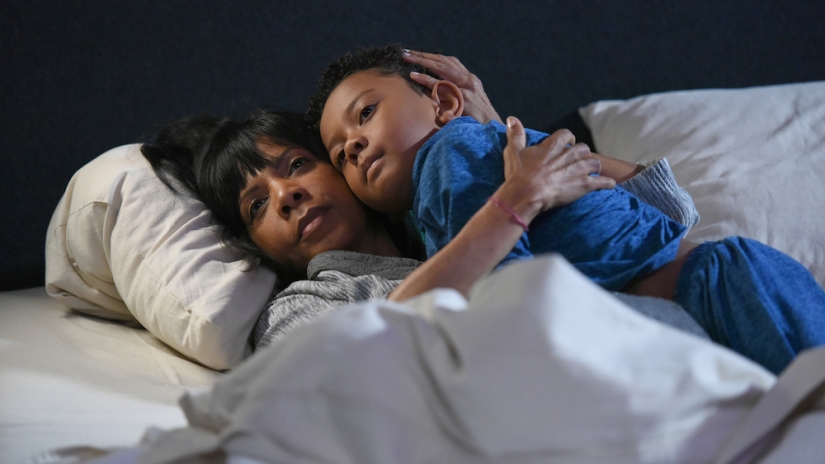 This is where I think critics have got it wrong when it comes to The Orville, clearly they were expecting something a bit less Star Trek and a bit more…well…Seth Macfarlane. There seems to be some difficulty in wrapping heads around a comedic show that also has drama. To me this seems a little silly, we have always used humour to help deal with difficult and traumatic situations and there is a great tradition of television using drama in juxtaposition with comedy to give dramatic weight. I need only think about moments such as Laverne’s death in Scrubs, the chicken story in M*A*S*H, and going over the top in Blackadder Goes Forth to know that well crafted comedic shows can be just as capable of delivering serious storylines as dramas. Critics have complained that The Orville doesn’t know if it wants to be a serious sci-fi show or an exaggerated spoof that’s full of sex jokes, to which I would answer, why can’t it be both?

It’s true that The Orville is not perfect, some of the jokes fall slightly flat and the repeated quips about opening pickle jars and bickering about infidelity are liable to get old pretty fast. However what The Orville has is very enjoyable. The banter between characters feels very natural, the jokes that do work are great, and the drama is more than enough to distract you from the jokes that fail. If given a couple of seasons to grow and mature? The show has the potential to become something really special. After all, if you go back and watch the first season of Star Trek: TNG it is actually pretty hokey, and somewhat unbalanced in terms of writing. What The Orville needs is time, and in that regard there may be some hope, since Fox has just renewed the show for a second season. The Orville may not be original, but what it is is pure unadulterated love and understanding of everything that made Star Trek great. So if you miss classic Star Trek but have found that Star Trek: Discovery just isn’t for you? Give The Orville a watch, you might just find what you are looking for.