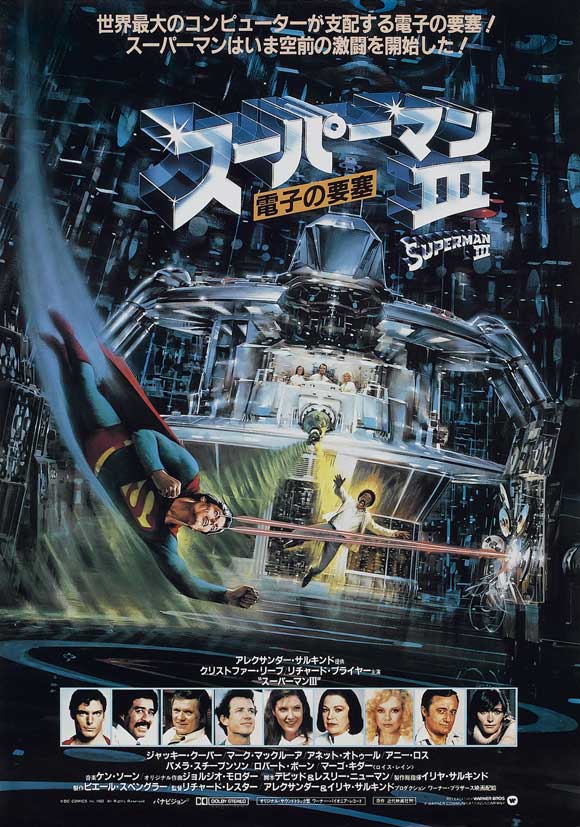 Superman III, at its best, is an anomaly. This, along with Superman IV, were the two films that director Bryan Singer and company actually wanted you to forget about when watching Superman Returns (2005). Ironically, Singer ended up creating his own missteps within the franchise and now everyone wants to forget that movie as well.

Superman III was made in the wake of Superman (1978) and Superman II (1980) and this movie went in a completely different direction to the previous films. While Richard Lester is credited with directing this and Superman II, it’s important to remember that Richard Lester mostly did cleanup on the second movie and in truth both the first and second film were Richard Donner projects. And, boy, does that make itself apparent here.

THE STORY AND THE PEOPLE WHO GET PAID TO TALK.
In short, Richard Pryor plays Gus Gorman, an out of luck nobody who just got his welfare checks cutoff. Out of the blue he gets into the brave new world of computing (topical!) and discovers he is a genius when it comes to this stuff. Robert Webster (played by the villainous Robert Vaughn) discovers this genius and enlists him to him take over the economy using the power of the non-internet computer stuff. All the while, Superman (Christopher Reeves) is visiting Smallville, rekindling a romance with Lana Lang (played by Annette O’Toole) and, in a sense, rediscovering himself. But then Supes gets hit with synthetic form of Kryptonite developed by Gorman that twists Superman’s personality instead of killing him. So we get the closest thing to Bizarro-Superman the big screen has ever seen. Pamela Stephenson also gives a solid, if airhead, performance as Lorelei and Annie Ross looks mean as can be as the main bad guys sister, Vera.
Does this sound complicated and stupid? That’s because it is!
But there are flashes of genius in this movie. Brief flashes, but still they are there.

Believe it or not the themes in this movie still hold up, and Richard Pryor gets to embody what is most interesting about this movie. While he never looks comfortable in the role, with Richard Pryor we finally get to see the other side of Metropolis.

Pryor’s character motivation is very simple to grasp: He is on welfare, he wants people to give him a chance, and he doesn’t want to be called a “bum.” This makes him relatable in ways that Superman can never be. He works for the bad guys and at times tries to be good, but watching him deal with these conflicts provides some of the biggest drama in the movie. And comedy.

What Superman is going through is dealt with in a more childish manner. The movie opens up with a ridiculous comical series of events that does nothing for the story, and Superman is relegated to being a prop. Jimmy Olsen (Marc McClure) shows up along with brief appearances by Lois Lane (Margot Kidder) and Perry White (Jackie Cooper). Honestly, their inclusion is only to remind the audience that, yes, Lois had her mind wiped in the second movie and Clark Kent is still at the Daily Planet. Then, it’s off to Smallville, where we discover Superman had a long lost love in Lana Lang and used to be bullied himself.

Things only get interesting when Superman turns bad and wreaks havoc on an unsuspecting populace. It’ reminds the viewer that when our heroes go bad, there is nothing to protect us. Once Superman is at the bottom of the barrel and goes to war with himself, we are then reminded just what it means to be a hero. It is something that has to be chosen, not given. While handled in a ridiculous (yet entertaining) way, it is still a valuable lesson.

Also, this is a great performance by Christopher Reeve. Synonymous with the role, it’s easy to forget just how great an actor Reeve was, but it’s glaringly apparent here. When he goes bad you can practically smell the alcohol through the screen, and when he screams at Clark Kent it will make your spine tingle.

Again, this movie is oddly prescient in its fear of computers and its concern over rampant greed, but what also stands out is an amusing action sequence involving video games. It’s impressive and fun to watch. Particularly when a series of missiles go after Superman. And when the computer swallows one of the bad guys it is still…STILL…one of the most terrifying special effects sequences in what is a children’s movie, essentially.

Oh…and Superman totally hits and quits the hottest chick in the movie. That is unique.

The story. The story. The story. It is just a mismatched mess that focuses on all the wrong things. And even worse, the film points out the weaknesses of the first two movies. Lois Lane being forced to forget Superman? Let’s not deal with that, let’s send her on a vacation. Yes, that really is how it is explained.

Also, the villains, while charming, are far from terrifying, with the exception of that nightmare-inducing ending.

And while we’re at it…RICHARD PRYOR?! I know, I know…I just got through saying how he was one of the more interesting parts of the movie, but that’s the problem. This is a Superman movie. Not a Richard Pryor movie. That dichotomy throws this ship right off course and into an iceberg.

THE VERDICT? ACTION A NO NO!

Sure, it’s a disaster. It only gets two stars on the Arnold meter. But like all truly bad movies, there are things to take away from a car wreck like this. Mainly, how not to make a sequel and how not to treat a hero’s h internal conflict.

Even so, the themes of the movie hold true, and the execution, while laughable, deserves a look-see. Any true movie geek should have this as a feather in their cap. Just don’t expect to be inspired.