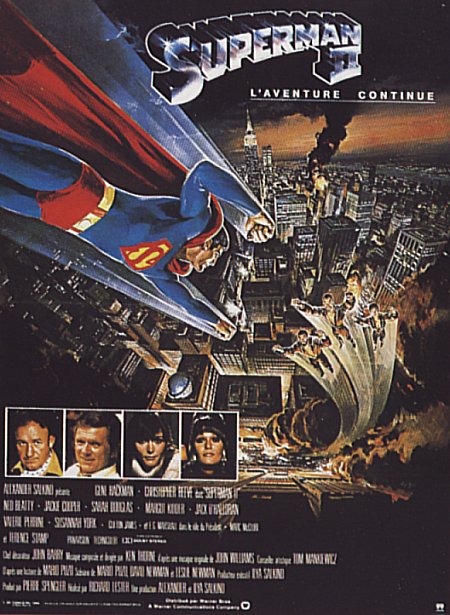 If Superman: The Movie was a blueprint for the superhero film, Superman II stands as a shining example of how to make a sequel.

To this date, the second film is my all-time favorite Superman movie. Everything that made the first movie awesome is expanded on here. It doesn’t take the plot of the first film and re-hash it with a flimsy, new disguise. We get a completely different story, raising the stakes and offering villains that can go toe to toe with our hero.
By all accounts Superman II should have been a complete disaster; there was a lot of behind the scene drama that led to a change in directors during the filming of the movie. Richard Donner had completed 75% of the movie in 1977 before being taken off the project and replaced by Richard Lester. Lester would continue on the franchise and is ultimately responsible for its decline in quality. He can be considered the Joel Schumacher of the Superman movies. Lester’s Superman went for simple camp,  destroying the epic potential of the franchise. Luckily, in 2006, a re-cut of Superman II was released titled Superman II: The Richard Donner Cut. Much of Donner’s original vision is here and makes the viewing of the first two films a delight.
Superman IIonce again stars Christopher Reeves as Superman, Margot Kidder as Lois Lane, Gene Hackman as Lex Luthor, and Terrence Stamp as General Zod. Before Krypton was destroyed, three criminals General Zod, Ursa, and Non were banished to the Phantom Zone by Jor-El for insurrection. After years of floating through space the Phantom Zone is shattered and they are granted freedom. They head to earth and discover they have super powers given to them by Earth’s yellow sun. It doesn’t take long for the trio to use their new abilities to terrorize the world in an attempt to become our new leaders. Meanwhile, Clark reveals his secret identity to Lois, forcing him to decide whether he will remain Superman or become a normal human to be with the woman he loves.

Once again the performances are top notch. Reeve’s proves he’s the definitive Superman and he definitely plays the vulnerable side of the character as he attempts to further his relationship with Margot Kidder’s Lois. However it’s Terrence Stamp’s Zod that steals the show. He’s cold, menacing, and arrogant, the polar opposite of Superman and a perfect foil. As in Superman: The Movie, Lex is once again the jester, but his funny moments outshine those from the first film.
Superman II is jam packed with amazing moments, one of which includes Supes getting into a brawl with a drunkard at a diner. Also, there is a great scene involving Superman battling his fellow Kryptonian in the streets of Metropolis.

It isn’t much of a stretch to say that Superman II has certainly been embraced by popular culture.   With the new Zack Snyder film attempting to revisit Zod (this time played by Michael Shannon), Man of Steel will have to do a lot to surpass this film’s greatness. When it’s all said in done, will Man of Steel be as fondly remembered as Superman II was by the previous generation? Or will Snyder and Shannon be forced to kneel before Superman II and its greatness? Only time will tell.
By Justin Fennell
www.justartstudio.com