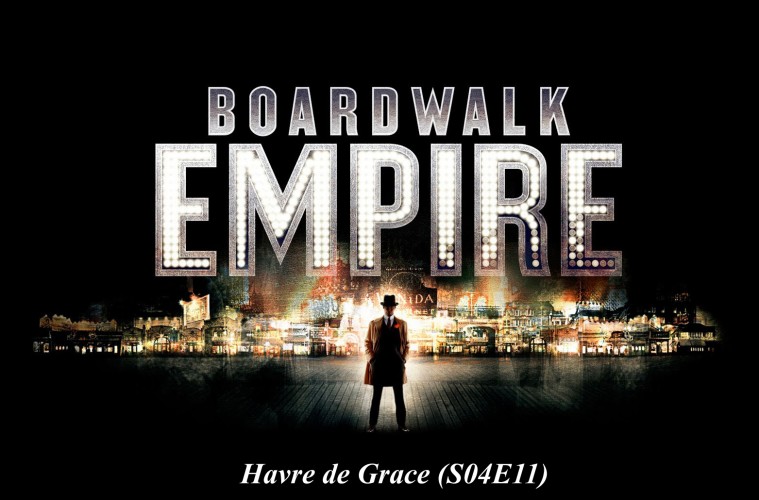 I have to admit: For the first half-hour of season four’s penultimate episode, I felt bored.

Bored of the progression of the storylines in the week’s episode. The characters and the atmosphere they inhabit carried a cerain staleness for this viewer. I was honestly about to change channels and catch the re-run on On-Demand the next day. Thankfully, and to my pleasant surprise, the last 10 minutes proved to be satisfying. More than that, it left me with eager anticipation for next week’s season finale.

RECAP: After escaping the Bader/Narcisse ambush from last week’s episode, Chalky White calls in a favor from an old friend. With Daughter Maitland in tow, they’re driven to what appears to be a plantation owner’s mansion in Havre de Grace, Maryland. The owner of the house, Oscar (Louis Gossett, Jr.), is the mentor of Albert ‘Chalky’ White. He speaks highly of Oscar: “Man taught me everything I know“.

Oscar is a wise, but crotchety old man. He’s blind and apparently has no filter. Chalky has come to him for help, but his mentor is reluctant despite their history. Oscar knew the Commodore and helped Chalky gain his clout in Atlantic City’s Black community.  His nephew Winston is among his caregivers, but he doesn’t seem to think much of him. He also insults Daughter’s cooking while also telling Chalky to leave her. He tells Chalky that he wants him to be his heir.

Later, Chalky speaks to Daughter and tells her that he wants to run away with her and never look back. Prior to that, she discusses his desire for revenge against Dr. Narcisse and Nucky (who was actually not privy to Chalky’s ambush).

Days later, at night, Oscar is waiting on the porch with a cocked shotgun. Chalky comes out and is promptly informed that Daughter has left. When she left, he became suspicious after hearing a strange noise outside and armed himself. Naturally, Chalky thinks his old mentor is crazy until bullets courtesy of Narcisse’s assassins mow him down. Chalky, Winston and others kill all three of Narcisse’s men. My theory: Daughter Maitland told them of their whereabouts somehow.

“There’s a skunk in yo’ cella“. That is the phrase (courtesy of Gaston Means) that leads off Nucky Thompson’s storyline this week. Means calls Nucky and offers him information about a leak in his circle. He makes an asking price of $50K before frantically moving it up to $500K. Right then and there, before Nucky can even inquire, the U.S. Capitol Police raid Means’ home and arrest him for perjury.

Speaking of which, Agent Knox has gotten Eli Thompson to spill the beans about his brother and his criminal connections. We wants to have Nucky in a room with crime figures up and down the east coast. That way, they all go down for certain. Eli doesn’t want to betray his brother, but he doesn’t want to lose his son either. When Eli and family arrive on Nucky’s well-guarded beachfront Albatross compound, they immediately discuss Means’ offer. Then Eli appeals to Nucky’s lust for money and power. By doing so, he initiates the set-up discussed with Agent Knox. This weighs clearly on Eli’s mind as he gets very upset at dinner when his wife is teasing his reaction towards the “insurance agent” from last week’s episode. Nucky asks his nephew, Willie Thompson, about the insurance agent (who we know is Agent Knox). They’re interrupted by Eli’s wife before Nucky can get an accurate description. Before he bids his family farewell, he tells Eli to set up the meeting. In the final scene, Nucky calls Sally Wheet and gives her three ominous words: “I WANT OUT”.

The last storyline was extremely gratifying because it was the end of a mystery and the beginning of one character’s long-overdue comeuppance. Gillian Darmody discusses her options with her lawyer Leander Whitlock. She wants custody of her grandson, but then appears to zone out mentally. Next time we see her, she goes to the Sagorsky household and to meet Tommy. She wants some sign of affection from him, but the boy is very reluctant. Then Richard Harrow appears and sternly tells her to back off. Seeing the ring on Harrow’s finger, this time Gillian has no ammunition. All she has is her fear. Knowing that she’s been defeated, she gives Tommy some personal effects that belonged to his father, Jimmy. She then tells Richard to take good care of him before leaving.

She goes home to Roy Phillips and declares how she’s finally free. No longer pursuing a custody battle, they go out and have dinner. Roy informs her that he has completed his business deal and will soon be leaving Atlantic City. At first, things seem to be crashing down for Gillian until Roy makes a marriage proposal to her and an invitation to leave with him. In a parking lot, Roy shoots a man dead who was angry with him about the aforementioned business deal. Gillian and him then drive away to her brothel. Distraught that he killed a man, Gillian encourages him to “let it go and get away with it“. To clarify, she confesses about that man named Roger (the stand-in for her son, Jimmy) last season whom she killed. She tearfully pleads for Roy to stay with her. That’s when his mood changes. Leander and some men appear and Roy reveals to a confused Gillian that he’s actually an agent for the Pinkerton Detective Agency. Leander hired him to find proof of Gillian’s criminal activities after she killed the Commodore. She tries to run, but they hold her down and arrest her.

MY THOUGHTS: Having Chalky White’s storyline was a two-fold nod: It took place in my home state (albeit in the 1920’s Prohibition era) and its proximity to Baltimore was a reference to the HBO series The Wire (of which Michael Kenneth Williams portrayed arguably the most popular character). It’s always a pleasure to see Louis Gossett, Jr., but his time was cut too short. I think Oscar’s death would’ve had more impact if they waited to do it for the season finale. Though Narcisse did not appear this week, it’s clear just how far his reach for vengeance can extend. With his mentor dead, Nucky may be Chalky’s only (potential) ally remaining.

Nucky suspects that Eli may be the skunk that Gaston referred to. Nucky’s reaction to Eli’s outburst at the dinner and his subsequent questioning of his nephew puts Eli’s future in jeopardy. He’s already been to jail, so scratch that. I think his treachery will be brought out into the open. As a result, Nucky may kill him just as he did Jimmy Darmody. I don’t care what Nucky claims about how he wants out. He likes the power that he had in the first three seasons. He wants at least a small sliver of it back.

As for Gillian Darmody. She’s had the worst deal of anyone in the show, but I feel no pity for her. Though she doesn’t exactly have it all together, she represents the kind of woman that no man would respect. Even her grandson doesn’t seem to like her. It was great to see Richard Harrow stand up to her and make her leave. She underestimated him and rudely condescended to Richard last season because of his facial handicap. Now she sees just how wrong and how stupid she was for that. With the startling revelation of Roy Phillips, her world has shattered completely. Personally, I hope they lock her up under the jail. And Ron Livingston played his part as an undercover very well. We all knew he was involved in something shady, but I didn’t think that it would’ve been law enforcement. With the revelations bestowed upon us this week, this viewer cannot wait for the finale.