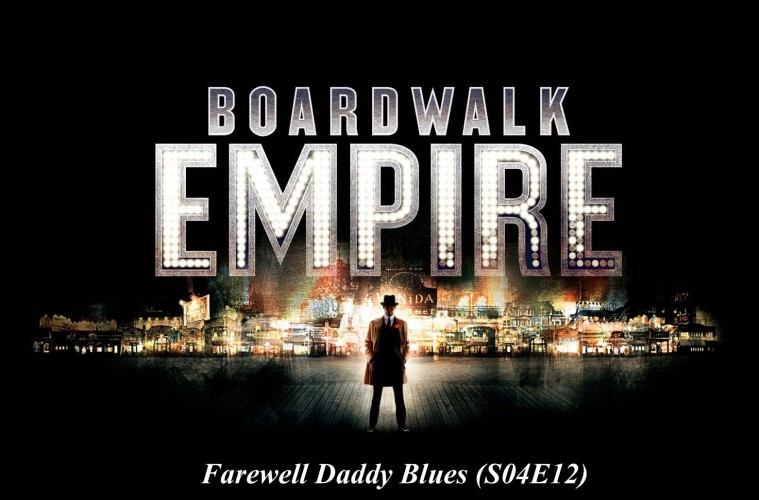 This show does not make it easy on me.

Since the close of the season four finale last night, I have been afflicted with a deep lingering sense of ambivalence. Part of me wants to remain objective and write my usual weekly recap. The other part of me right now is a screaming fan who would love to go H.A.M. on director Tim Van Patten for killing off my favorite character and thus placing my future viewings of this program in jeopardy. I’m aware that my latter half is merely an initial reaction to watching a character in whom I had invested a substantial amount of emotional attachment get killed. You want the characters you favor to have a happy ending after an arduous ordeal. But alas, even fiction doesn’t operate to one’s specifications once a serving of reality is added.

The lyrics above are from a song called “Farewell Daddy Blues”. The excerpt I used serves a rare function: Its theme (figuratively and literally) encapsulates the mood of both the characters and the viewers. Viewers lost a character they love; while some characters lost the seemingly dominant male figures in their lives. And then there are some characters who just lost something precious to them altogether. The season two finale episode was entitled “To the Lost”. In many ways, these two finales may have come full circle.

RECAP: Starting at Nucky Thompson’s guarded beachfront home. Inside, Nucky is having a telephone conversation with Sally Wheet. It’s starts off flirtatious with both of them talking in mediocre Spanish, but then segues into his desire to escape his business. However, before he can vocalize his actual plans, Chalky White enters the home. After having his men subdue the guards, he manages to hold Nucky at gunpoint. Despite Nucky rightly protesting his innocence in regards to Chalky and Daughter Maitland a few episodes back, Chalky does not care about any of that. His mind is fixated on one man: Dr. Valentin Narcisse.

A closed-door meeting is then called between Narcisse, Nucky and Ed Bader (whom Nucky angrily dismisses for his role in Chalky’s predicament). Nucky tells Narcisse that he wants the situation between him and Chalky to be finished. He also relays to Narcisse that Chalky knows the whereabouts of Daughter.

In Chicago, Al and Ralph Capone discuss with Nelson Van Alden the attempt on Al’s life weeks back. All three men suspect that Joe Torrio may have been behind it. Almost on cue, Torrio appears and suggests that Dean O’Bannion is the mastermind behind the attempted assassination. However, O’Bannion was killed before the hit. Later, Torrio gets gunned down in front of his wife and ends up in a hospital. He admits crime is a “young man’s game” and cedes control of his empire to Al Capone.

Meanwhile, Agent Knox (aka James Tolliver) is contending with Director Hoover over his plans regarding Eli Thompson. Eli continues to have doubts even with the planning and reassurances of the FBI. Nucky has agreed to the meeting between him, Eli and east coast organized crime figures at an elegant hotel. Knox has no doubt that his sting operation will go as planned. Knox is setting up his surveillance in the room adjacent to the planned meeting as Nucky calls Eli to pick him up so as to arrive together. Eli does not tell his son, Willie Thompson, about the meeting. Upon arriving at Nucky’s near-empty home, he finds Nucky imparting two revelations: The first being that when the meeting is over, he’ll be heading to Cuba with Sally Wheet. The second is confirmation of what we all suspected: He knows of Eli’s treachery. Nucky puts a gun to his brother’s head and just when it looks like he’s about to commit fratricide, Willie abruptly enters and quells the situation. Eli confesses to his son and brother about Knox and Willie’s murder charge. Nucky leaves when Eli accuses him of looking to take away his family.

With a no-show from the Thompsons, Agent Knox’s plan is a complete failure. Agent Harold Selby tells Knox that he’s too emotionally compromised, at which point Knox dares him to take away his gun. Eli heads home after meeting with Nucky. Upon arrival, an angry and emotionally-flustered Knox is present and has revealed himself and his intentions to Eli’s family. Eli orders everyone to leave the living room, allowing Knox to pull a gun on Eli and arrest him. Eli has other plans and turns it into a street fight. While Knox gets a few hits in, it doesn’t help when Eli beats him to death.

When Nucky arrives at the train station, he is detained by the FBI who are now in search of Eli for murdering a federal agent. Near the end, Eli meets with Willie to tell him that his father is safe “out west”.  He asks if Nucky would’ve killed his father if he didn’t show up. Nucky tells him ‘no’ and then tells Willie that he’s the man of the house now.

Gillian Darmody is on trial facing murder charges. Richard Harrow is called in to testify against her, but his testimony is badgered and only serves to help Darmody’s defense. Knowing that if Gillian is free, she may try to take Tommy Darmody again, Harrow goes to Nucky for help. He knows Nucky killed Jimmy Darmody and asks for the location of his body. Nucky is reticent, but Harrow is relentless. “If an anonymous source disclosed a location, what would you do?”, Nucky asks the expert sharpshooter. We get our answer in the next scene when the media finds Jimmy Darmody’s body.

Richard next appears at the train station. He hugs Tommy and kisses his wife passionately in an uncharacteristic display of affection. He sends them to Wisconsin to his sister’s home and tells them he’ll be arriving there in three days. In return for Nucky’s assistance, Harrow has agreed to kill Dr. Narcisse in Club Onyx. Meeting with Narcisse, Chalky describes himself as someone with a “bankroll in one pocket, pistol in the other”. Narcisse brings out Chalky’s daughter Maybelle as leverage. Harrow is preparing to take his shot from the rafters, but it’s clear that he has lost his killer instinct. When he finally takes it, he ends up killing Maybelle in front of Narcisse and her now-grieving father. At that point, the FBI raids the club. They arrest Dr. Narcisse and his men, while Harrow escapes suffering a gunshot wound.

Narcisse is interrogated by Director Hoover. He’s offered a deal: Give up your idol Marcus Garvey or else. When Narcisse reluctantly agrees, it’s clear that he has betrayed his own beliefs and has been exposed for what he truly is.

The ending montage consists of Daughter’s rendition of “Farewell Daddy Blues” interspersed with Van Alden helping Eli disappear; Gillian Darmody in jail; Margaret Schroeder carrying her daughter into their new home as promised by Arnold Rothstein; Sally Wheet disappointedly drinking alone; and Chalky contemplating on the front porch of Oscar’s Havre de Grace manor. Lastly, Richard Harrow is on a train. Then walking on a railroad track and then to his sister’s home where everyone is waiting for him. When Julia walks toward him with a smile, Harrow’s face is whole and no longer disfigured. Then the scene shifts back to reality:

Richard Harrow, sans prosthesis, has died peacefully under the boardwalk.

MY THOUGHTS: There were many parallels that stuck out for me in the season finale. As stated in the intro, the the theme tying these parallels together was loss. Chalky loses his daughter, Gillian loses her freedom, the Thompson household loses their patriarch, et. al. Agent Knox lost his life, but he was painfully disillusioned when FBI Director J. Edgar Hoover made their professional relationship very clear through a brutal dressing down. Hoover employs the same technique when he interrogated Narcisse. He knows Narcisse is a fraud, and with the latter’s almost-painful acquiescence to Hoover’s demands, Narcisse knows it to. With Willie Thompson now head of his household (again) with no patriarch, Chalky White is implied to take over Oscar’s manor as per the dead man’s wishes.

While I didn’t like Eli’s cop-out “my big brother’s always in my way!” speech, I was glad he beat Agent Knox to death. For a man who’s been under considerable strain these past few episodes, the beating seemed pretty cathartic. I actually cheered for Knox’s death. I have to give Brian Geraghty props for breathing a deplorable air into such a character. He made me hate his character, and that’s a sign of a good actor. But still, it was great to see Eli channel his inner Ivan Drago and make Knox his Apollo Creed (go see Rocky IV if you don’t get the reference).

Tommy Darmody won’t have to worry about his grandmother coming for him now that she’s in prison. But he lost another father as well. When Richard hugged him and told him he loved him, it was his death knell. As it was for Jimmy Darmody when he did the same with Tommy. Harrow’s an expert killer and this season, we get to see the effect it’s had on his conscience. When poised to kill Narcisse, he couldn’t develop the composure needed for such an action. He made a mistake and gets himself shot in the process. Ironically, he died under the boardwalk, the one place where he knew peace and love with his wife, Julia. In his dying hallucination, he gets his wish: He’s no longer maimed and united with her and his family. I knew someone was going to die this episode, but they should’ve kept Harrow around. They didn’t get to fully explore the dichotomy of his nature: The gentle man vs. the killing machine.

Overall, the season finale was satisfying. I most likely will continue viewing this program come season five. The season as a whole felt somewhat short, but I can never fault a serial drama that’s so well-written and gripping. Cons notwithstanding, the finale was another job well done.