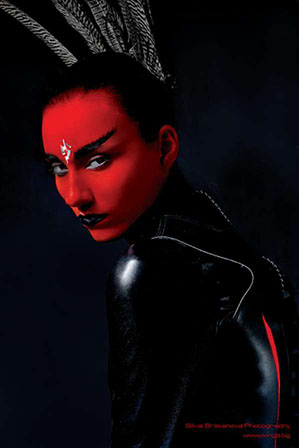 I was a Native American Once…From the FUTURE.

So, it was that time of year where we all sat down, gave thanks (because that only happens once a year), and gorged ourselves to a joyous, gluttonous, death with our families.

“So, a futuristic Native American,” you ask? Well, maybe that’s not quite accurate, so let me explain what I was trying to go for…

There is an event every year in DC that has a theme for entry. Those that attend usually get really creative and go all out. I am one of those people. A couple of years ago, the theme was “Tribal”.

I normally don’t draw a complete blank when it comes to these types of events, but I was really stumped on the theme. I didn’t want to go as something generic, or what everyone else might have thought of.

The group of costumers I was going with also didn’t have a clue what to do.

WAIT! What if I took those ideas and turned them into what they might be like in an alternate future where ‘tribes’ still have a strong presence?

So, I did some searching online for any references I could find and came across a website where fashion meets tribal. It was so hot that I just had to get the group to do this.

While doing the “high-fashion” version of “tribal” seemed a bit difficult to achieve for those not committed to going all in (or those with limited creative skills), that’s what I really wanted to do. So, I tried my best to achieve that goal.

Overall, we did pretty good. What we came up with was a cross between say, the films Brazil and The Matrix.

We decided that each of us would represent a different tribe, but have one common feature that linked us together as a group. So we decided that feature would be the use of black and white, and the tribes represented would be Tibet, Persia, Native American and Nordic.

I was immediately inspired by a picture from this website I stumbled across, that I chose Native American. 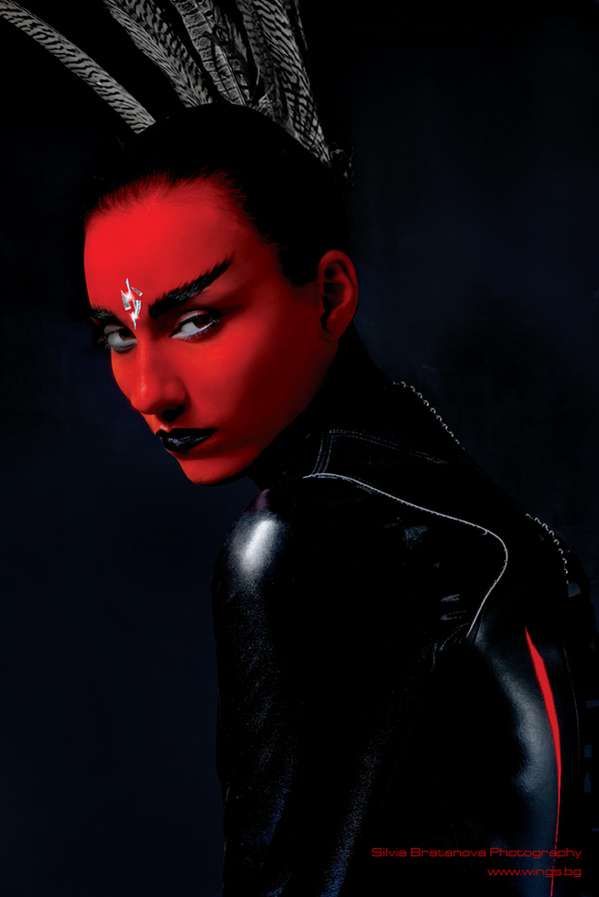 This is the picture that originally told me we found our theme.

There was something about the red body that drew me in. With the combination of the slick black suit and a simple row of feathers in the hair, I knew this would be different and it was right up my alley.

But just when I thought I had my mind made up, I saw this picture from the same group of photos, and I was sold. 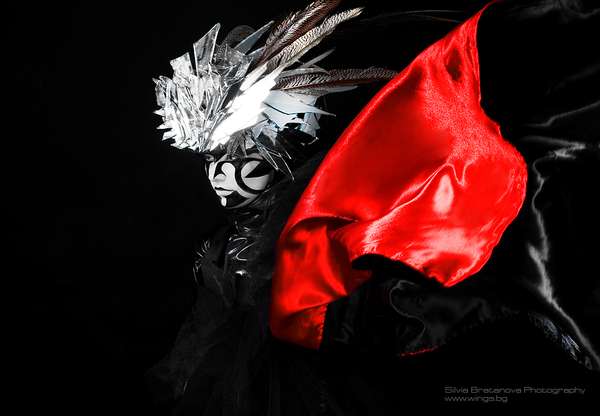 I don’t know whether it was the fact that I had gone “red” to this event before, or the head piece of this one costume got me to commit to this look instead, but I was definitely happy with the result. Not only did I achieve the look, but I created what at some point during the process I thought was an impossibility; the headpiece.

I loved the idea, loved the challenge of making what could have been graphically created into a reality, and loved the tribal black and white face paint.
So here it is…

Side by side comparison;

Obviously there are some differences. The flowing cape in the original I did not achieve because I didn’t have a high powered fan blowing on me everywhere I went. Even so, I had to alter it a bit to stay put. Had I just draped it over my shoulder, it would have looked a bit plain. Had I tried to elevate it high in the sky, it would have been too heavy, fallen right over and given me a ton of problems throughout the night. I tried several ways to get a similar look without the high winds, but nothing would hold up like how I got it in the photo. This part of the costume was by far the hardest. I almost gave up on the drape, but then the costume wouldn’t have been as glorious. I didn’t quit though, and ended up with a piece that was definitely essential to the costume.

I chose to have the chest open on the black suit instead of one closed piece from head to toe. I did this to distinguish the neck as a separate piece from the rest of the suit as well as break up the whole thing a bit. As far as the torso down goes, there was no picture, so that was all up to my imagination.

The headpiece was another obstacle at times. I thought at some point I might have tried making something that was too complex for reality. I kept finding solutions to my problems though and ended up with something magnificent. I love this head piece and am quite happy with the outcome.

If you would like to know how I made any of these pieces I can provide a tutorial.

So here is the rest of the gang;

Here are the rest of the photos that inspired this idea; (click image to view larger)

And lastly you can view photos of some of the other attendees and entertainment from the night here.

I had a wonderful Thanksgiving, I hope you all did too. Until next time!

NOTES:
All “inspiration” photos are from the Crystal Blood set by Bulgarian photographer Silvia Bratanova. To view more photos from this set and learn the idea behind it, please go to: http://illamasqua-research-blog.blogspot.com/2012/03/futuristic-tribal-fashion.html

All event photos are by SSB Productions and Blinkofanaye.