Animazement 2015 Cosplay: Visual Candy For The Nerd In You

For years photographers and bystanders everywhere photograph cosplayers when and where they can. Cosplay is after all, something to behold. Lately, more and more people have been taking to their cameras to capture cosplayers in a different way. With a few editing skills, people are able to put all the amazing costumed characters together in one video and even give them a soundtrack. What happens when captured this way is something sort of magical. Appropriate for a colorful array of fictional characters that are brought to life.
While some people are able to emote really well through a photo, videography can really show you the character of each and everyone. The addition of music adds emotion to what you may already feel by watching cosplayers in action.

Beat Down Boogie has been putting out excellent videos of costumed attendees from conventions everywhere. Check out one of their latest videos shot at Animazement in Raleigh, NC this past May. You may even recognize two of the BDB squad at 3:33 if you’ve been following along with Action A Go Go.

Brian Lee and Matthew Sumner of BDB are seen in their Kung Fu Avengers: Civil War Iron Man and Captain America costumes. As mentioned earlier, if you dropped by AAGG mid May, you will have seen a the piece about the web movie they did that spawned these costumes.
Lee and Sumner are just two of the five core members of the “web-based film troop”. Together, along with Micah Moore, Rick Burnett and Blake Faucette, they create an array of visual content that revolves around the video game, comic book and cartoon world. Basically, they’re a bunch of guys who like to have fun and create videos that radiate that sentiment. If you can’t get on board with that, you are not AAGG approved.

If you like these guys as much as we do, head on over to Patreon and help them keep the fun flowing. Aside from the awesome cosplay compilations, be sure to check out their hilarious web series on Youtube. Don’t forget to subscribe to their channel! 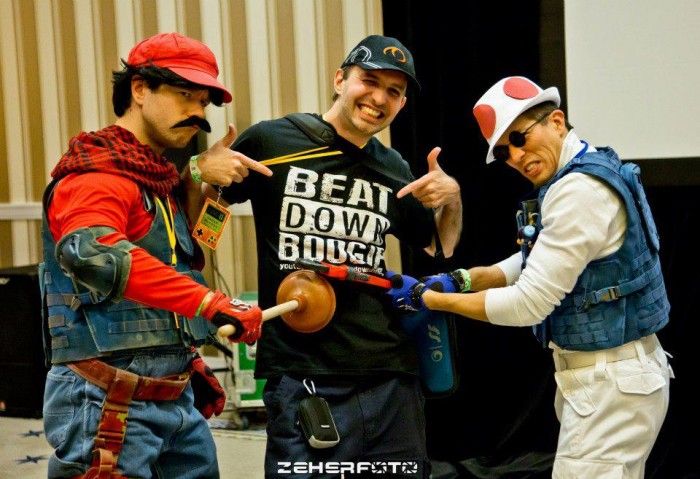 Often times referred to as Optimus Prime, Tabatha LeStrange is a machine. A ghost machine.
Catch her if you can on Twitter @BD_Danger