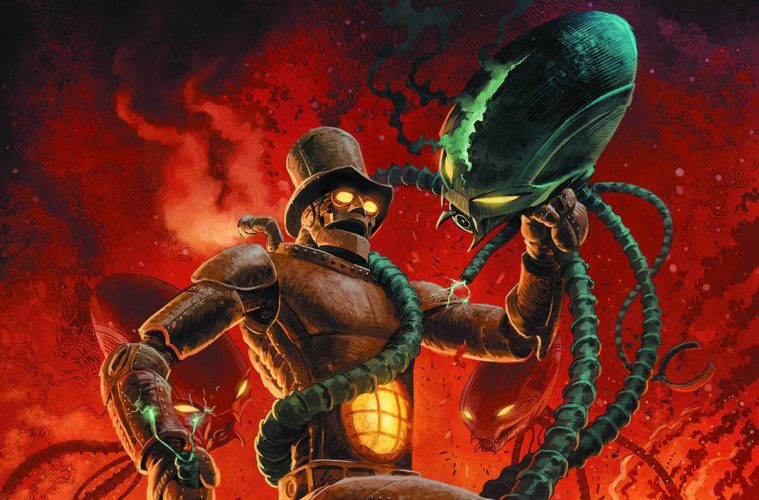 REVIEW: The Steam Man of the Prairies and the Dark Rider Get Down (TPB – Issues 1-5)

The trade paperback of The Steam Man of the Prairies and the Dark Rider Get Down will be available July 6, 2016. This includes issues 1-5, which are as of now, the only 5 issues in the series available. In honor of its release this week, we give it the ol’ honest review. Is it worth picking up? Read on…. 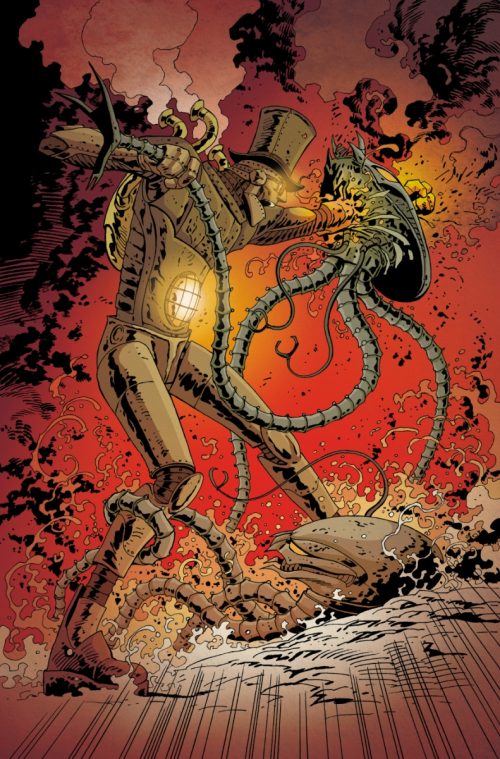 If you haven’t read issues 1-5 already and were thinking of picking up the TPB, read this first. While this review is solely my opinion, you may find that you agree if you are anything like me.

The steam punk culture is right up my alley. As in, I dig the fashion, time period and the kooky and clever inventions. I however don’t live the steam punk lifestyle. With that being said, whether you live the lifestyle, are more like me when it comes to the culture or know nothing about it, this review may speak to everyone alike.
Ask yourself why you’re interested in this title and I will probably tell you those reasons are not justified enough for an investment. Sounds like I have beef right? Well I do and I’ll get to that in a moment, but first….

The Steam Man (for short) starts out in the year 1899, four years after all hell broke loose on Earth. Giant, steam-powered machines were built to battle the invaders who brought their wrath upon civilization. But where these invaders came from was a mystery until the history of the story’s antagonist was unveiled.

In these 5 chapters, we discover how the antagonist came to be what he is and why it’s crucial he be destroyed. We discover how a tear in the fabric of space and time created chaos in the story’s present time. We follow The Steam Man‘s 4 initial protagonists through their steam-powered quest to bring some sense of normalcy back to Earth.

Steam-powered robots, aliens, a vampire, the wild west, time travel, albino apes, it’s all here folks! Sounds awesome right? Why yes it does, but it isn’t. It plays on almost every cool thing you can think of yet falls short in satisfying any of those interests. 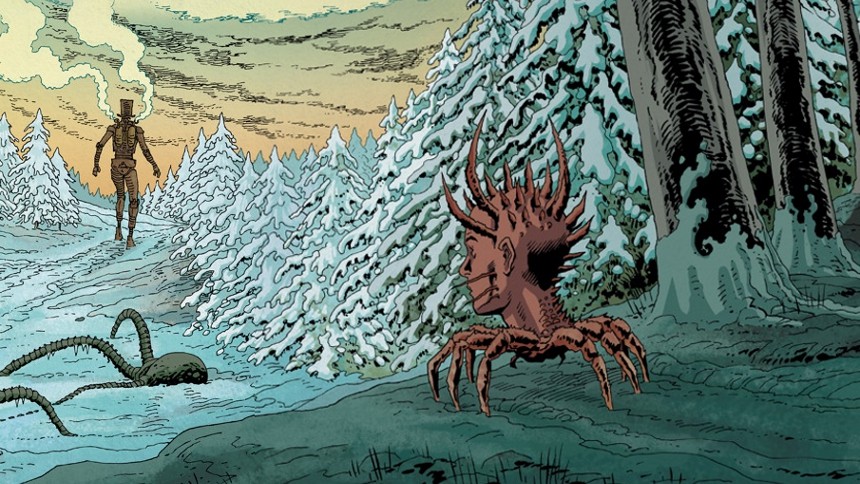 Here’s where my beef begins.  It seems like there are a lot of borrowed ideas in The Steam Man. Borrowed lines, borrowed imagery, and a borrowed alien concept.

The line “proper fucked”, which was used in The Steam Man immediately took me to Guy Ritchie’s Snatch. We all know who made this line famous. Alright, alright, so we’ve all wanted to say or use this line in some way, fine. Moorlocks? The addition of another “o” doesn’t change the fact that Moorlocks is a derivative of Morlocks, which came from H.G. Wells’ The Time Machine. Which isn’t the only thing borrowed from H.G. Wells here. But again, fine, this isn’t the first time Morlocks or any of H.G. Wells’ ideas have been deviated and used. But what about the alien tripods that invade the planet? Totally War of the Worlds. To their credit though, they do mention the similarity in the concept art at the end of the book. There were also a couple of pages that illustrated Captain Beadle too close to the likes of Han Solo. You’ll know exactly what I mean when you see it. The bad-ass, engineered horse and mysterious rider in a hat has been done too.

The borrowed ideas aren’t my only issue with The Steam Man. The synopsis on the back of the cover even includes “albino apes”, which at no point do you see. At least I don’t. I get apes to a degree, but nowhere did I see anything resembling “albino” in a fully colored TPB. Even more though, is the lack of emotion this book presents. Everyone seems so casual. No one really emotes when someone gets ripped to shreds. No real shock or horror. Only in the last chapter when things really got graphic, did it evoke any sort of feeling. That wasn’t from a sudden change in character expression, but rather what was happening to them was gut wrenching. [End Spoilers] 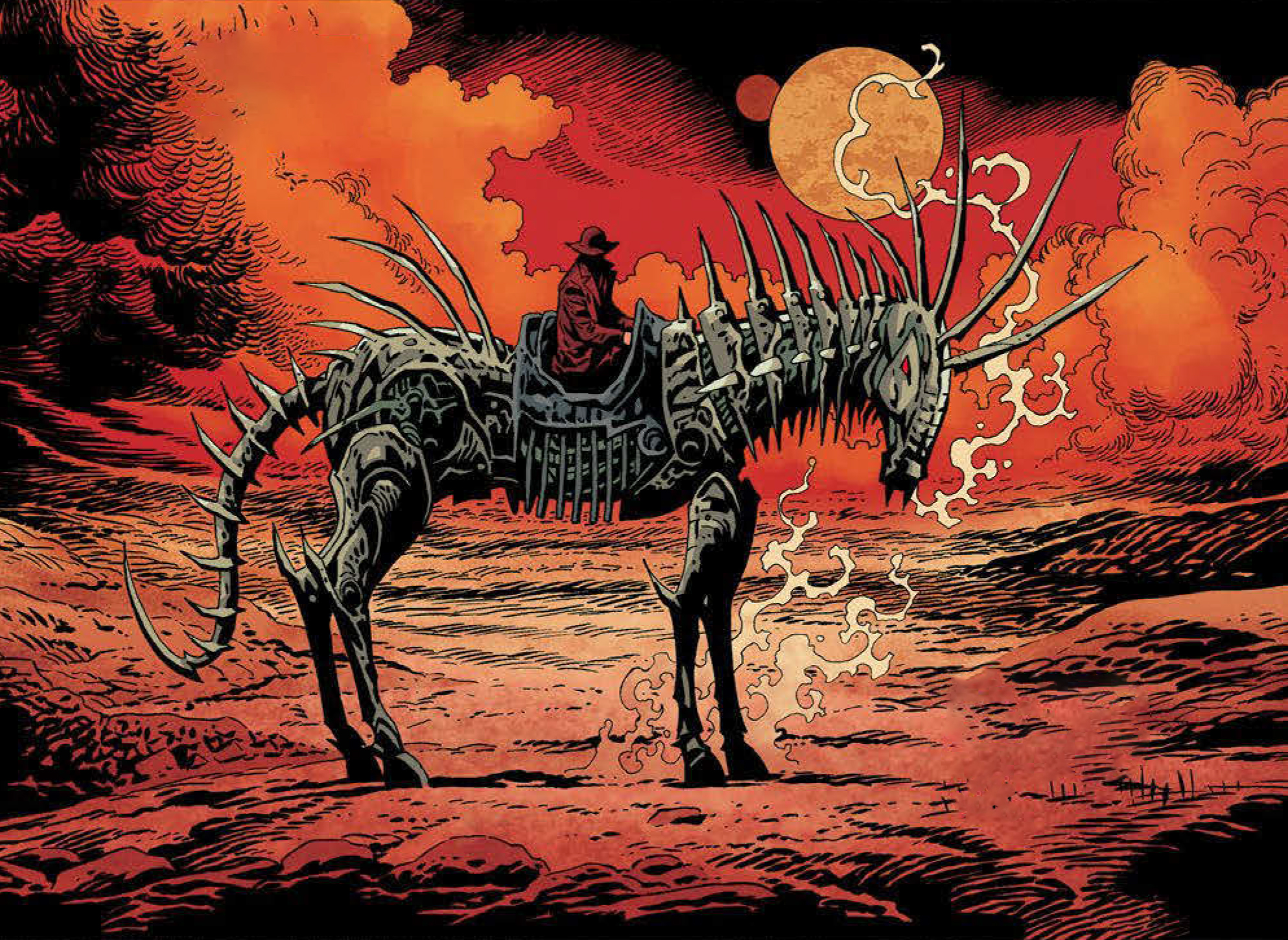 On the plus side, the cover and page break art by Piotr Kowalski and Aurore Folny is awesome. I really do wish this title stood up to how interesting the art makes it seem. Even the mixing of worlds and time could have been really cool. I like the idea, it just doesn’t get me there though. Unfortunately, the lack of emotion and amount of borrowed content took something that was meant to be fresh and original and made it feel totally stale and unoriginal.

So whether you’re into steam punk, aliens, planet of the apes, westerns, vampires or time travel, this title is just a tease on anything that may actually interest you. At least the first 5 issues are. So to answer the question of “Is it worth it?” Clive Barker says “It’s a must read!” For the right amount of money, I would too. Since we’re being honest here though, I wouldn’t pick up any future issues of The Steam Man. Pass.

The views and commentaries expressed on these pages are solely those of their authors and are not necessarily either shared or endorsed by ActionAGoGo.com. all copyrights held by their respective owner(s)