NEESON SEASON: Will Netflixing Under the Influence Elevate or Hinder the Mostly Forgotten Western SERAPHIM FALLS?

Seraphim Falls had a fairly limited U.S. release in 2007, but a robust enough marketing push here in New York that it felt fairly ubiquitous at the time.  Ads really sold home the Brosnan/Neeson pairing as if this was the Old West version of Irish Heat that audiences had been clamoring to see.  The star power was such a selling point, that I’m not exactly sure anyone actually knew what it was about.

As you might have guessed, we’re looking at this somewhat forgotten film in celebration of the one and only Neeson Season.  Before I popped it up to the top of my Netflix Queue for the “holiday” this was holding fairly steady at about #379.  My estimated rating was 3.5 stars, which presumably makes Seraphim Falls the best movie covered in this feature.

This involved a pair of Sam Adams six-packs.  Cherry Wheat and Cold Snap.  Cherry Wheat is something I had a taste for around the time this movie was released, actually.  These days, however, it’s waaaay too sweet for me.  The good news is that the cherry flavor is evocative of actual fresh cherries.  Unfortunately, it’s a little too evocative of the fruit.

Cold Snap on the other hand really captures the light wheatiness that the first beer was missing.  A medium bodied Belgian-style white with a little kick and a hint of orange that hits the palate just right is pretty darn goon in moderation. 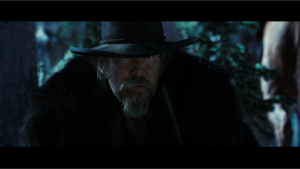 What was I thinking with this movie?  Netflixing Under the Influence has historically been about b-movies.  Why would it make sense to discuss a potentially middling drama about the hunting of a disgraced Civil War soldier?  Yeah, it sounds cool, but it’s just so much more entertaining to mock something for being crappy or praise it for being awesome.

Seraphim Falls begins strikingly in a sequence where a nameless character played by Pierce Brosnan (later identified as Gideon) is struggling for survival on a freezing mountainside while being hunted by a nameless group of people led by Liam Neeson (later identified as Carver).  He covers his tracks, lays deadly traps for his pursuers, and carves a bullet out of his own arm.  The conflict occurs so suddenly that I actually checked to make sure my dvd player didn’t skip a scene.  It is only later that the larger stakes and motivations are fleshed out by dialogue and a key flashback sequence.

As the characters meet more secondary characters in the episodic second act, more is learned about the nature of this manhunt and the men behind it.  Gideon is a war criminal with a bounty on his head and Carver is a man who is hellbent on collecting it. 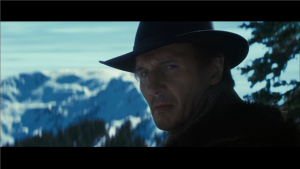 Because of Gideon’s previous rank as a Union officer, he’s only worth anything alive, which adds to the tension and difficulty of apprehending the incredibly capable fugitive.  Like Next of Kin, Liam Neeson as Carver is an amoral, almost inhuman engine of vengeance.  On deeper consideration, he does play that role quite a bit (Next of Kin, the Taken series, Darkman).  He is exceptionally skilled at letting his characters betray the strong emotions that they work their hardest to keep internalized.  This serves to cast a cold, yet sensitive figure whose commitment to filing the holes of loss and regret belies his massive frame.  Neeson has a mouth and jawline that always look more comfortable scowling than smiling, but a perpetual sadness to his eyes that overcomes his often righteous anger.

The rest of the cast is effective as well.  Brosnan’s inescapable work as James Bond is reflected in Gideon’s cold efficiency.  And even though the character is an antihero, Brosnan is charming as ever.  Several welcome character actors also show up in Michael Wincott and Ed Lauter as part of Carver’s posse, Xander Berkeley as a violent Irishman, Tom Noonan as a strange holy man, and Anjelica Houston as an almost supernatural figure of temptation. 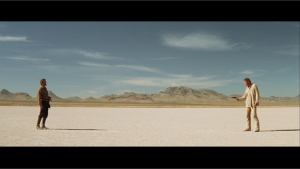 Houston’s character is a brief but vital role, as Greek mythology and New Testament references abound in the telling of this somewhat preachy tale of the painful costs of violence.

John Toll’s cinematography stands out in focusing on the vastness of the virgin landscapes and contrasting the blues, browns, and reds of that can pepper the frame.  There’s both an other worldly quality as well as a gritty realness in each individual shot that brings to mind the work of Winton C. Hoch on She Wore a Yellow Ribbon and The Searchers.   The composition of shot is carefully orchestrated in such a way that makes every lush (or, at times, barren) expanse look like a painting.  Director David Von Ancken (known almost exclusively for his television work) lets the the movie take its time in taking in the gorgeous visuals and setting a tone both unsettling and welcoming. 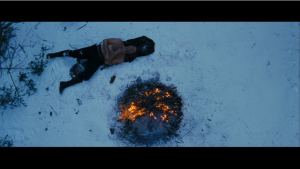 Without a doubt, the nearly wordless opening 15 minutes with Gideon trying to escape from Carver and his gang are fantastic.  The early Jeremiah Johnson-esque survivalist sequence is punctuated by intimate shots of the mysterious group of bounty hunters and a “disaster movie” level of escalating obstacles for Gideon in the vein of First Blood.  It expertly sets up his character as a considerable threat with no need for dialogue.  Just a strong performance and a string of “Look how badass I am” scenes.  It’s a daring decision to explicitly mask the good/evil alignment of the two main characters, but it’s a lot more challenging when the audience’s sympathies constantly shift from the desperate tenacity of Gideon and the vicious melancholy of Carver.

Once both the pursued and pursuer encounter more characters, the movie loses a bit of steam.  Not because those storytelling moments don’t work, but in fact because the first few minutes work so well.  As it enters the heavily allegorical third act, however, the movie transcends its genre trappings and becomes something else entirely.

While Seraphim Falls is in no way some unsung masterpiece, there are no real tangible details to complain about.  Maybe the trailer that gives away a major plot point and uses the cumbersome phrase “relentless revenge” is the worst “part” of the movie.  As is too often the case, it seems intent on selling a completely different film than it should be.  Namely a movie where Pierce Brosnan plays a “part injun/part wolf”. 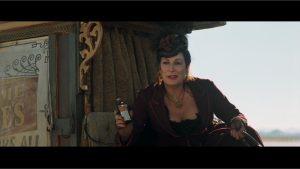 As mentioned when searching for a “lowpoint”, there is nothing to laugh at, nothing to be snarky about, and nothing to stand up and go nuts for. The only drawback to this fact is how that doesn’t really make a good article.  There are nuanced arguments parsing out the on-the-nose religious allusions and awkwardly proselytized ending that comes out of the blue.  However, the unique pacing that seems to gradually slow the movie down from its action-packed intro to deliberate conclusion actually serves to make the last few minutes work for me overall.  Likewise, the increasingly distanced lead performances help sell the metaphorical ideal of both characters’ place in the world.   However, that doesn’t change the fact that the film’s thesis on revenge (Spoiler Alert: it’s against it) is still a bit simplistic for such a heavily trafficked topic in film… especially Westerns.

The somewhat clumsy ending aside, Seraphim Falls is simply a pretty good action-drama.   The American Western has long been considered an extension of the b-movie umbrella, but the genre is no longer a staple of the collective cinematic toolbox.  Gone are the days of The Cisco Kid and Roy Rogers… we simply remember the more critically friendly masterpieces of John Ford and Sergio Leone.  Netflixing Under the Influence will find some room for the dire-looking American Outlaws and Bad Girls eventually, but this was a movie with much higher (fully realized) aspirations.  In fact, my research doesn’t show Seraphim Falls as a regular contender on lists counting down the top Westerns of the “modern age” of cinema.  I am happy to see the underrated favorite of mine, Open Range, come up consistently… but this has enough strong elements to definitely qualify as a modern classic of the genre.  That being said, I’m kind of hoping next week’s Neeson Season article is a lot funnier.

All images courtesy of ICON Productions