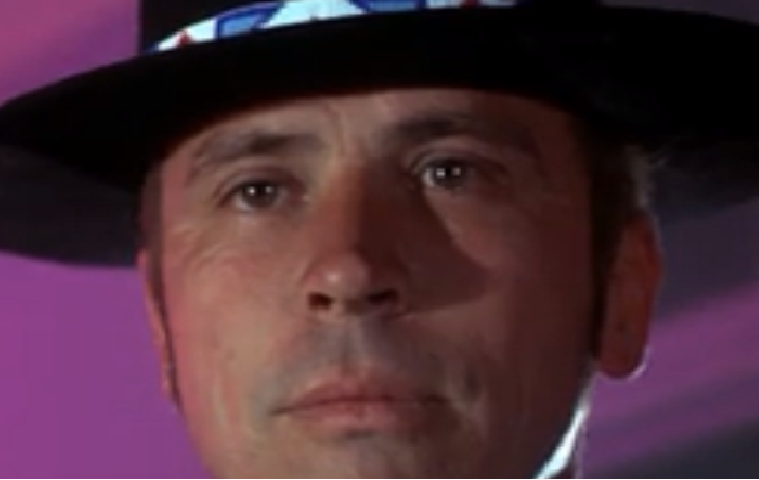 Why Did I Watch This?: The Trial of Billy Jack

Now that the Oscars are over, we at Action A Go Go decided to explore the opposite end of the quality spectrum.  For every action movie that proves the genre is capable of standout cinema, there is a bargain bin over at Best Buy filled with proof that action movies tend to be cheesy and over-the-top.

Don’t get me wrong, not all the movies in this feature are going to be “bad” per se.  But  this is going to be our opportunity to explore the fun, B-movie side of our favorite genre.  This is “Why Did I Watch This?”

As with many of the movies I will probably be discussing in this space, the reason I watched The Trial of Billy Jack when I did was because it was expiring on Netflix’s streaming service.   In general, however, the “Billy Jack” series is on my radar primarily because of the renewed discussions of Tom Laughlin’s career after his recent death in December of 2013.  In fact, as a nice segue from  Oscar A Go Go, he was included in the In Memoriam piece of this year’s Oscar broadcast.

The Trial of Billy Jack (1974) is the third movie in a series that includes The Born Losers (1967), Billy Jack (1971), and Billy Jack Goes to Washington (1977).  I watched this movie as part of a lazy Sunday afternoon double feature along with the previous entry in the series: Billy Jack.   I have still yet to see the first or fourth film, and do not plan on it anytime soon.  I should point out that I did not consume any booze while watching this film and hope that’s the last time I have to say that in this feature.

While still amateurish and heavy-handed, 1974’s Billy Jack is a watchable time capsule of anti-war sentiment and awareness of the ongoing exploitation of the American Indian in the 60’s and 70’s.  Billy Jack is a half-Navajo Vietnam vet who is a master of the Korean martial art, hapkido.  Throughout the movie he’s tasked with defending the Freedom School (a hippy commune for outcasts and runaways started by a character played by Delores Taylor) from the conservative and racist townspeople nearby.  Although it’s poorly acted and has the morality of an Oreo cookie (bad guys are unconscionably bad, good guys are aggressively pacifist), the movie is saved by the charming earnestness of its message.  A somewhat well-staged hapkido fight scene in the town square and some improvised filler led by counter-culture icon Howard Hesseman help save the movie from drowning in its own overt themes.

After a breezy 1 hour 54 minutes spent with that film, I turned on the next film in the series, only to be immediately discouraged by the nearly 3 hour runtime.  The Trial of Billy Jack starts as the reliably wooden Delores Taylor (also the co-writer and Laughlin’s real life wife) tells a reporter the story of Billy Jack’s return from prison in flashback.  It seems important to note that the eponymous trial only takes up about the first 15 minutes of the film.  Regardless, it seems that during the four years he was locked up, the Freedom School started a newspaper and tv station tasked with unveiling corruption in high levels of authority.  Chaos ensues when the powers that be start fighting back by bombing their TV station (and accidentally setting themselves on fire in the process).  In addition to all this, the government is in bed with real estate developers and participating in the forced termination and transfer of American Indian lands.

At the end of 1971’s Billy Jack, our hero was sent to prison because he karate chopped a racist rapist in the throat and killed him.  In order to curb his violent outbursts (I can’t stress enough how virulently non-violent every non-villain in the movie is) The Trial of Billy Jack has him going on a lengthy and drawn out vision quest where he attempts to learn the serenity to truly love those who try to hurt him instead of fighting.  There’s some substantial “character growth” in these sequences, which makes it all the more hilarious when he forgets it all about 20 minutes later and karate kicks his way through an entire town hall fundraiser after an uncomfortable scene where his friend is publicly beaten and humiliated.

The aforementioned fight at the fundraiser is similarly entertaining as the centerpiece Town Square fight in the previous film, just on a grander scale. There is a lot of barefoot kicking and karate chopping that pales in comparison to any decent fight choreography we’re used to seeing, but was considered pretty successful for American films at the time.

The fight culminates in Billy Jack pulling off his favorite move of running full speed towards someone with a gun and getting shot in the stomach.  It’s ok, though.  He’s able to get off a nice karate chop in the gunman’s throat, killing the bad guy instantly.  Note: This is the exact same technique and result that got him sent to prison in the first film.  Spoiler Alert: He survives both bullet wounds.

The movie also contained a fascinatingly nonsensical moment where we find out the bad guys are evil because they shoot guns at glass bottles in the woods.  The evil part is that for no apparent reason besides indulgence, the bottles are resting on a platform of plywood held in the air by two naked women.  It’s mesmerizing and strange.

No, not even the barely passable action saves this one.  Mostly, The Trial of Billy Jack feels interminable, preachy, and is often wrong-headed in its specific political agendas.  The most important theme of non-violence makes little sense seeing as the protagonist is always happy to take off his shoes and kick people in the face.

The unintentionally hilarious vision quest not only borders on racist appropriation of another culture, but it’s also unnecessary from the story’s perspective since everything the hero learns about pacifism and “the fourth level of reaction to violence” is disregarded almost immediately.

There’s also an extremely strange portion where the filmmakers tout their therapeutic practice of hugging and loving child abusers until they feel enough love to become magically healed and therefore stop abusing their children.  Even the final, shoot ‘em up climax is an explicitly hamfisted reference to the politically charged Kent State shootings from a few years earlier.  I have never been accused of being overly PC, but so many off-the-mark moments in this movie just felt wrong.

Overall, the story is stretched too thin between the injustice against the Nader’s Raiders-like Freedom School and the mistreatment of the local American Indian community and it causes the plot to feel both bloated and disjointed.  Meanwhile, the already inflated running time is repeatedly padded out with long, unrehearsed political discussions performed by non-actors with little to say of import. The Trial of Billy Jack plays like an inept homage to Medium Cool seemingly based on a stoned college freshman’s poorly researched “Race Relations” essay about the plight of the American Indian.  Skip it.  It’s not even worth it for the bellydancing scene.