Why Did I Watch ‘At the Earth’s Core?’: Starring Psychic, Exploding Dinosaurs

Another American International Pictures joint (produced along with Britain’s Amicus Production),  At the Earth’s Core is a wild adventure film that was (according to Wikipedia) the 18th most profitable British film of 1976!  I had never heard of it, but, as is the case with most of the movies I choose to feature here, it is unavailable on Netflix’s DVD service and was expiring on their streaming service.  Also, Peter Cushing is always a treat.  From Star Wars to his collaborations with Hammer Films, he is a wonderful source of dignity in the genre movies he so often pops up in.

As previously mentioned, watched this via Netflix Instant.  I was all alone on a Sunday morning.

Apparently after the success of Edgar Rice Burroughs adaptation The Land that Time Forgot, Amicus decided to hire the same director to follow-up with another Burroughs book starring the same actor.  The story follows the eccentric Dr. Abner Perry (Peter Cushing) and his friendly gadabout student named David (Doug McClure), burrowing through a mountain in a giant drill for, uh, science I guess.  By the 8-minute mark things go awry and they lose control of the vehicle, burrowing thousands of feet below the surface instead of emerging from the other side of a mountain. 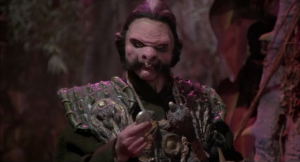 Of course, the new world is fraught with danger and a pseudo-industrial soundtrack.  Our heroes are immediately attacked by a giant, beaked lizard and captured by humanoid slave traders.  While shackled together, David makes eyes at the underground native, Dia (Caroline Munro), and saves her from another slave who’s getting a little grabby.  Apparently the Earth’s core has some strange cultural norms where if a man saves a woman from sexual assault they now own the woman (kind of exacerbates the problem, huh?)  David’s lack of acknowledgement of this unspoken rule sends Dia into such a rage that she disappears for the next 40 minutes of the film (nearly half the movie).  The concept of being a slave was apparently fine, but as soon as a man ignores her she musters up the ability to escape.

The scattershot plot then leads the slaves to the lair of a group of winged dinosaurs who are mind-controlling the pig-nosed slave masters (I wish I was making this up).  It seems that the male slaves are forced to farm lava and the women are sacrificed daily to the evil dinos.  David starts a fairly messy rebellion by simply stabbing a dude which leads to freedom for approximately one slave (himself).

He then meets up with another ex-slave named Ra (Cy Grant) and they join forces in order to save their brethren.  Unfortunately, they are almost immediately captured and David is forced to fight a proto-rancor in a gladiator pit.  He succeeds and once again finds a hole in the slave masters’ impenetrable defenses by punching a guard and allowing chaos to erupt.  Like his last rebellion, David gets split up from everyone, only this time with the company of Dr. Perry. 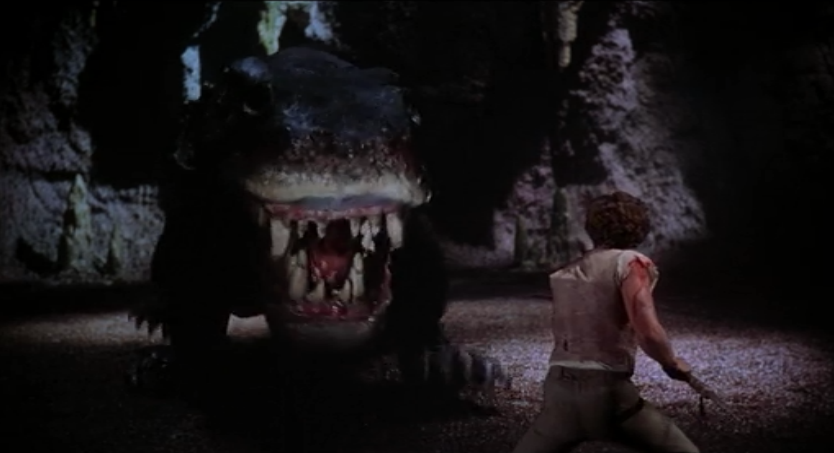 They finally stumble across Dia somewhere (there is really no sense of geography as all the character movement is basically aimless wandering) and again scare away her would-be rapist with the help of a fire-breathing frog that hilariously explodes when it dies.  Soon afterward, David saves her from another violent suitor with the unfortunate moniker of “Jubal the Ugly One”. 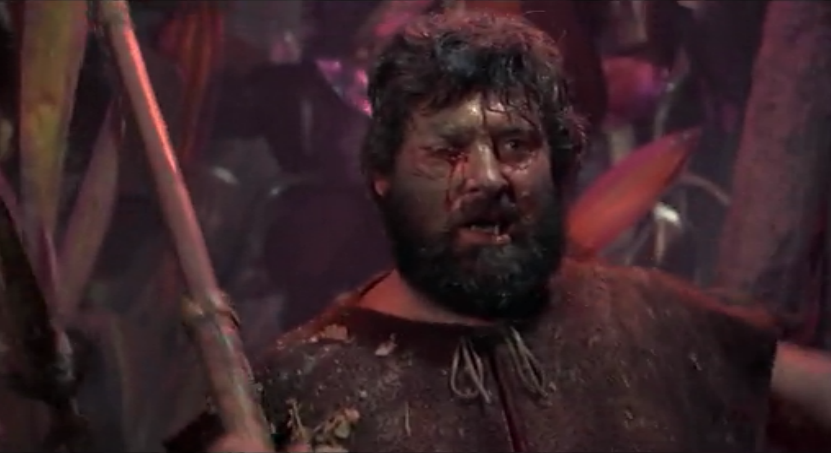 Finally, our trio of “heroes” meets up with Ra and the rest of the escaped slaves in order to plan a revolt against the evil, psychic dinosaurs.  This goes well, but is dangerous work since these sentient dinosaurs also explode when they die.  And everyone lives together happily ever after.  Just kidding, David and Dr. Perry go back to the surface and leave Dia behind.

If the above synopsis seems a little overly detailed it’s because At the Earth’s Core is so jam-packed with setpieces and ideas.  Instead of it being a roller coaster ride of fun (a la Raiders of the Lost Ark), it makes every aspect of the film feel rushed and under-developed.  For example, Jubal the Ugly One (I refuse to abbreviate his hilarious name) has nothing to do with the slave drivers, yet he is the penultimate villain before the big fight at the end.  To add insult to injury, his fight with David (an hour and 6 minutes into the movie) is the first time we see this supposedly “important” character who had only been mentioned in passing one other time in the film.  Ostensibly, the overarching plot is the freeing of the humans from the torturous reign of the supernatural dinosaur villains.  However, that really only starts in the last twenty minutes of the film and they have minimal introduction as “the big bads”.

Although director Kevin Connor chooses not to utilize it to its full potential, the Lost in Space-set design and special effects are pretty fun.  I’m a sucker for old school practical effects, whether realistic or completely unconvincing. 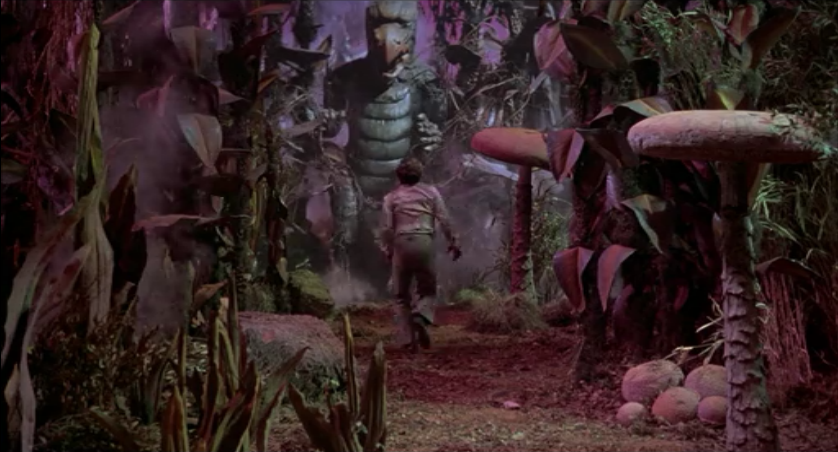 As long as there is a sense of craft and aesthetic sensibility, there is value to be had.  Similar to The Loves of Hercules (but much more impressive), there is a kitschy charm to the over-the-top and fanciful production.  The monsters look like discarded concept designs for Rodan, while the oversized plants, foam rocks, and pink-green hue call to mind a live-action cartoon.

As mentioned, Connor doesn’t quite photograph them with the loving care they deserve, however a few action scenes really stand out.  One segment that is especially reminiscent of both Merian C. Cooper’s King Kong and countless kaiju films has two rubber-suited monsters fighting over the privilege of eating a slave in a composite shot featuring a large group of people cowering behind a rock in the foreground.

The lack of compelling characters or emotion really drags At the Earth’s Core down.  David starts out the film getting drunk on champagne and acting a fool (“Dr. Perry was kind enough to nominate me as his worst student.  Took me longer to graduate geological engineering than any man alive!”) but doesn’t quite complete any hero’s journey.  He just immediately becomes a serious “white knight” when the monsters start to attack and he saves an entire race of underground humans in the process. 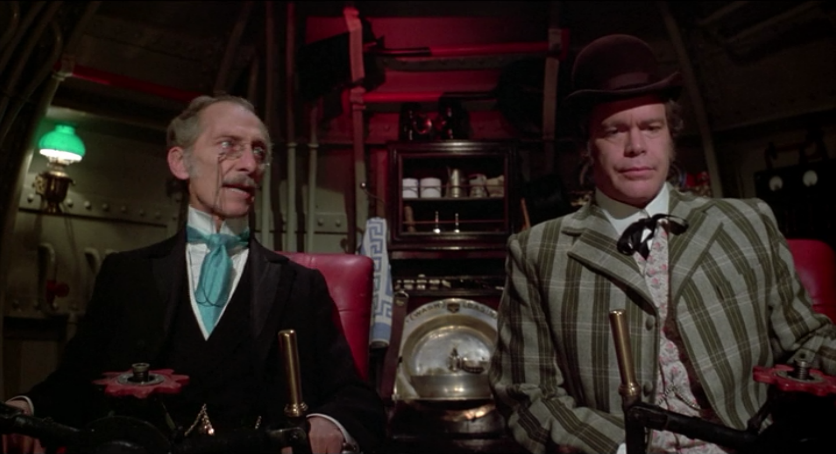 This should not be a big deal as adventure films aren’t typically held to “screenwriting 101” rules of characterization.  Does Indiana Jones really go through a full “arc” in Raiders?  No, but at least he’s interesting.  After we’re introduced to David as a terrible student and a foil to the by-the-book Dr. Perry, he doesn’t stay consistent  All the shortcuts the filmmakers work through in the beginning to set up his character are just disregarded once the action happens.  David frankly becomes boring and selfless without a crisis of confidence, moment of introspection, or moral dilemma.

Alternatively, the normally welcome presence of Peter Cushing is played for unfulfilling laughs.  In the first 15 minutes, my notes had already listed him as the best part of the movie.  Within a few scenes of that I was just hoping he’d disappear altogether.  Again, this is due to the absence of any meaningful characterization.  David may be a little boring, but every other character is utterly one-note.  Dia’s main character trait is that she’s pretty, Ra doesn’t even have a character trait, and Dr. Perry is just British.

The movie is pretty fun, but ultimately empty.  You have to have a high tolerance for camp to consider watching this one.   Not to say that the only way to enjoy At the Earth’s Core is ironically.  It’s just that the goofy action can only pick up so much of the slack left by the poor storytelling.  The pacing feels hurried as the plot resorts to being episodic to a fault. 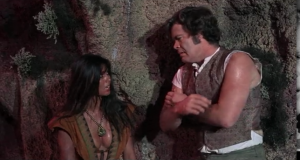 I am not familiar with the source material, but it feels like the filmmakers sacrificed everything character and plot-driven in order to cram in the maximum number of wacky action scenes.  While normally this sounds amazing, keep in mind the action scenes aren’t terribly impressive.  The movie’s about a bunch of rubber monsters messing with a bunch of uninteresting people running around a fake-looking setting

Worst of all, the movie wastes the famous breasts of Caroline Munro.  The picture above is the best screen capture I could get.  For shame, Kevin Connor, for shame.  The Golden Voyage of Sinbad this ain’t.