FYI, this is one of those reviews that are NSFW.

Not to piggyback on fellow AAGG writer Zak’s “Why Did I Watch This?” movie reviews, but I felt that this film fit the criteria. I had heard about the premise of this film several months ago, but thought nothing of it beyond a few chuckles. Then, this past Monday, I was in CD Depot on Route 1 and saw the blu-ray for the film on sale. I figured, “Why the hell not? If it’s as ridiculous as Street Fighter, I’ll keep it around just to have something to laugh at“. I watched it on Tuesday night and I actually laughed all the way through the film. Whatever frightful emotions or empathy I was supposed to feel from the gore and for the characters prove to be ineffective once my belief had been indefinitely suspended.

I laughed all the way through the movie in the one place I could freely do so: My own home. Because if I did it in the movie theater, I’d only be servicing a certain racial stereotype but alas, I digress.

The story is about Dr. Josef Heiter (played by Dieter Laser), a German retired surgeon known for specializing in separating conjoined twins. In his retirement, he’s become maniacally obsessed with doing the reverse: Joining people together. He’s turned part of his home into a makeshift hospital/operating room. Meanwhile, two American tourists, Lindsay (Ashley C. Williams) and Jenny (Ashlynn Yennie), are wandering through a forest after the car they were driving gets a flat tire. While wandering, they get caught in a rainstorm and end up at Heiter’s home seeking assistance. From his facial expressions, it’s clear that something’s off with Heiter. The audience knows it, but the two girls don’t notice until it’s too late. Heiter drugs them both with tainted water and they wake up subdued in his hospital. After Heiter kidnaps a third person, a Japanese tourist named Katsuro (portrayed by Ahikiro Kitamura), he explains his procedure:

He wants to create a human centipede (a Siamese triplet) by sewing live people together mouth-to-anus. He has Katsuro as the front, Lindsay suffers the most pain as the middle section, and Jenny as the back. Heiter removes the ligaments from each of their knees so that they can no longer stand; removes Lindsay’s and Jenny’s teeth and grafts Lindsay’s mouth to Katsuro’s anus, and Jenny’s to Lindsay’s. Connected mouth-to-anus, they share a single digestive track. Katsuro is the only one who can still verbally communicate and feed himself, which isn’t good for Lindsay when he has a bowel movement. Heiter treats his conjoined subjects like a pet dog who needs to be housebroken. 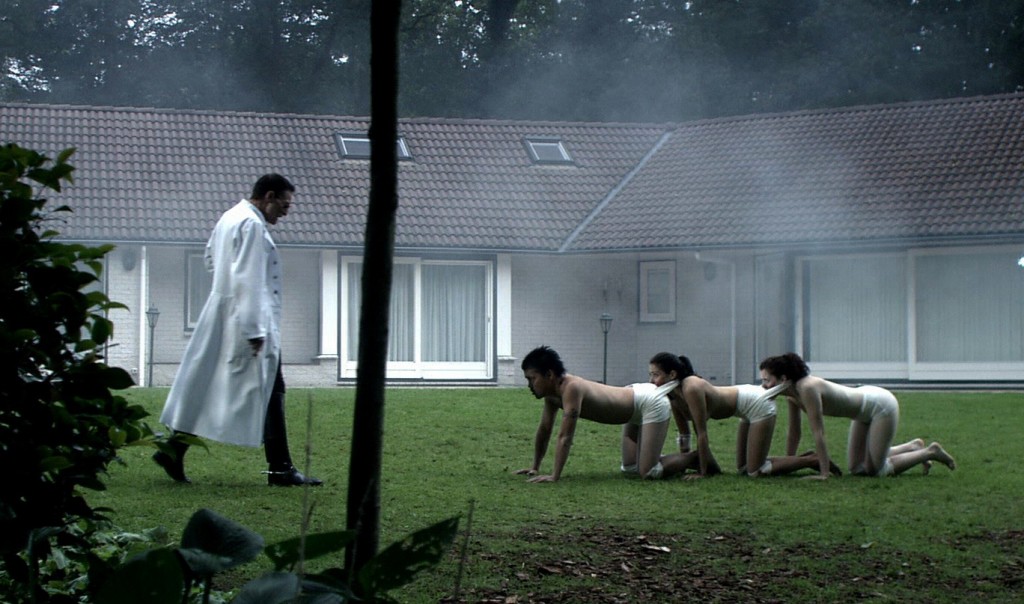 Before the procedure, Lindsay makes an escape attempt and ends up trapped in the house. Upon re-capture, Heiter tells her of how he previously tried his conjoining fantasy on K-9’s. One dog attempted to escape, so Heiter punished that dog by making it the central section of the K-9 centipede. He does the same to Lindsay and to have her experience the most pain for defying him. No spoilers intended, but by the end of them film, Lindsay’s an even bigger victim than Heiter’s foreshadowed.

Watching it, I couldn’t tell if this was satire, horror or a pitch-black-as-Satchel Paige kind of comedy. I felt in certain times that Tom Six may have been trying to parody the conventions of a horror film in a similar manner as Wes Craven did with Scream. For example, you have a couple of White, nubile, air-headed American women as tourists in Germany who make every mistake that horror movie victims make on their way to their inevitable fate. Their car gets a flat tire that (surprise, surprise) they can’t fix; they abandon their vehicle; get lost in the woods; get caught in a rainstorm; get temporarily tangled in a humorous dialogue demonstrative of language barrier with fat middle-aged lascivious German man; and end up at the house of a stranger who I wouldn’t trust based on his countenance alone. All that alone made me yell such gems as, “Bitch, what are you doing?! Go the other way!” 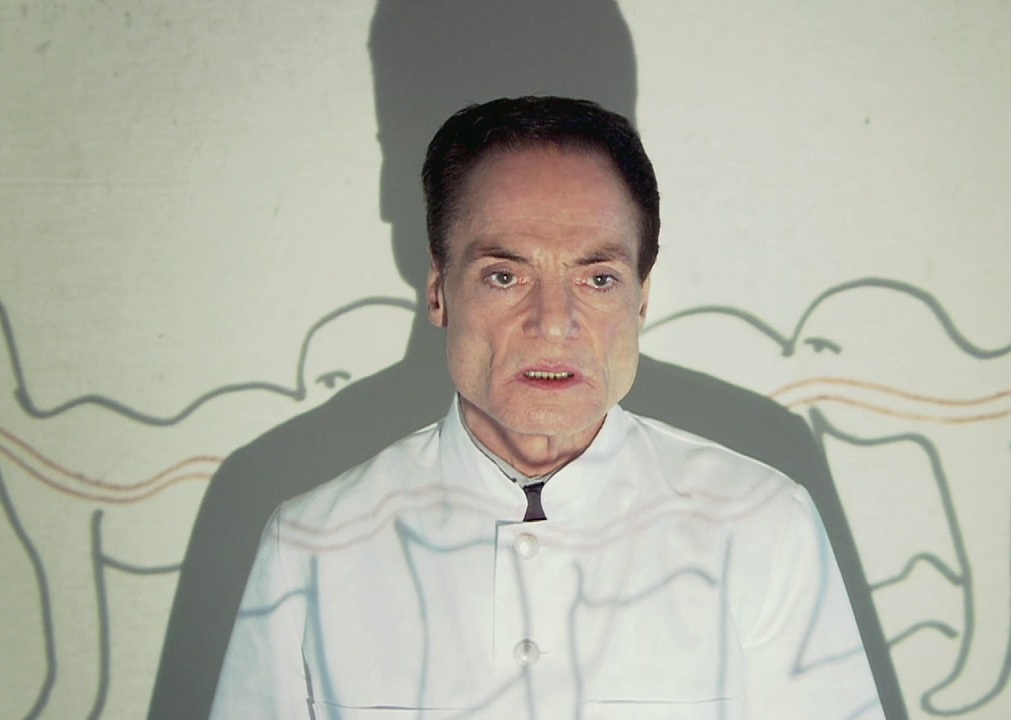 Would you trust this man….around your children?

The horror aspect was frightening in concept-only. Even after Laser’s character explained the centipede procedure and performed the surgery, I was still unaffected. When the centipede was complete with the Asian man as the front and the girls having their mouths surgically attached to rectums, I still couldn’t feel appalled. I was hoping one of person in the centipede would forcibly break themselves free. Now, that right there would’ve grossed me out.

The centipede’s visual evokes psychosexual imagery. Not to get Freudian, but Tom Six based this film off a joke shared among friends about how the perfect punishment for child molesters would be to have their mouths sewn to the ani of fat truck drivers. Now, we all how the human centipede is connected so, anal fixation anyone? For me, the visual was a perversion of pornographic expressions that I refuse to share in this review. The black comedy I understood was mostly from Laser’s fanaticism for his work, in thought and deed. Kitamura’s character’s dialogue about how his grisly fate is his punishment for sin is what brought it to tragicomedic proportions. For the two female characters, they’re placed in a permanent sexual position, becoming sex objects in a sick way. And the fact that the middle woman’s only source of sustenance (if we can even call it that) is the Asian man’s feces may be Six’s commentary on women taking shit from men, albeit in literal terms. The centipede’s completion along with Kitamura’s confession draw parallels to the Gregor Samsa character in Franz Kafka’s The Metamorphosis.

Is this a good film? No. Some people can stomach neither the concept, the ghastly visuals or the typical horror-movie storyline. A friend forewarned me that this film is a softcore version of horror and he was right. But it’s bearable if you keep in mind that what they’re doing is just…a…movie. Most reviews have stated that the science in the movie is medically accurate, but I don’t believe that. Two Arnolds for you, daisy chain (look it up if you don’t know what that is).