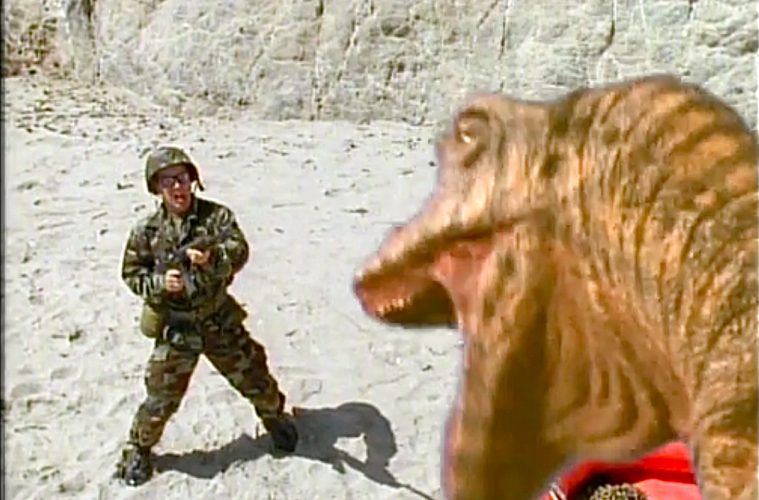 Is it completely ignorant of me to say I watched this because of the poster?  A Raquel Welch-like babe is standing in front of a dinosaur while wearing a bikini.  Sounds pretty fun to me.  The involvement of co-directors Fred Olen Ray (Hollywood Chainsaw Hookers) and Jim Wynorski (Chopping Mall) helped to pique my interest as well.

Before I watched this, it wasn’t even on my Queue.  Netflix simply recommended it to me.  I think writing this article is becoming a self-fulfilling prophecy of having terrible movies recommended.  Netflix only thought I’d give it 2.3 stars.

It’s a Valentine’s Day miracle!  I convinced my fiancée, Erin, to watch Dinosaur Island with me, while we split a magnum of red wine.  I don’t remember what wine though.  Considering our normal habits, it was either Yellow Tail, Gato Negro, or Barefoot.  It was good, I guess.  We keep going back to that well, so… 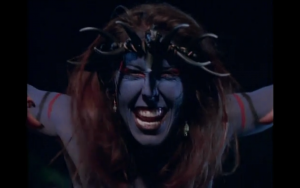 The movie starts roaring out of the gate with a dinosaur sacrifice.  A body-painted priestess dances around over the opening credits while a tied-up woman screams for release.  Eventually a giant, rubber Tyrannosaurus Rex foot enters the frame and the camera zooms into the naked and screaming woman’s face.  Erin appreciated that it only took the first dozen frames or so before there was some honest-to-goodness nipple on-screen.  Most of the intended audience was probably pretty excited as well at this compelling prologue.  Next we’re introduced to our main characters.  A few soldiers are on their way to their respective court martial trials via cargo plane and crash land on a deserted island.  Wouldn’t you know… they land on the previously introduced island full of half-naked women and dinosaur puppets.  Richard Gabai plays the fast-talking narrator Skeemer; Ross Hagen is the no-nonsense Captain Briggs, Peter Spellos is the overweight Turbo, and Tom Shell plays the nerdy Wayne.  Two other actors play eventual dinosaur fodder, which is obvious since they aren’t given easily identifiable and simplistic character traits the way the protagonists are. 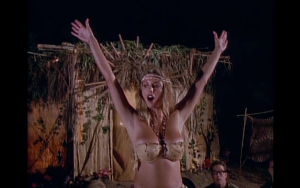 Luckily, the buxom blondes of Dinosaur Island know English because they learned their cultural heritage from the Druid missionaries who had visited them hundreds of years ago.  Wait… Druids?!  Either Dinosaur Island is terribly uninformed or willfully obtuse.  This requires some research.  Bear with me for a second.  Here, watch this video of CGI dino roars while you wait.   Ok… as it turns out this movie is a loose remake of the z-grade Untamed Women from 1952.  In that movie the women of the tropical island are influenced by Druids for whatever reason.  Maybe those filmmakers confused Easter Island and Stonehenge?  Regardless, it looks incredibly entertaining and I can’t wait to watch it.  Dinosaur Island appropriately turns the ignorance into a sly wink at its boneheaded influences.  Later it also explains that the presence of dinosaurs is due to chemicals in the soil, which makes the women hundreds/thousands of years old as well.  (Skeemer: “I’ve always had a thing for older women!” hyuk hyuk) 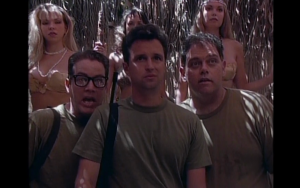 Our “heroes” are mistaken for the prophesied killers of “The Great One”, who happens to be the T-Rex the inhabitants have to regularly submit a virginal sacrifice.  Of course, virgins are in large supply seeing as there are no men on the island.  With all the immortal women, dinosaurs, and Druid mumbo jumbo, this is what Erin had trouble suspending her disbelief for.  “I don’t get why the women wouldn’t just have sex with each other after being alone for hundreds of years.”  That’s a pretty good question considering the softcore pedigree here.  Why all these one-on-one sex scenes when this seems tailor-made for some good old-fashioned lesbian/group sex.  Regardless, to complete the male fantasy of the film, the women are woefully uninformed about all things carnal.  This is great for the soldiers as the women don’t even know how bad in bed their partners are!  Skeemer, Turbo, and Wayne even name their romantic foils (their true names are unpronounceable in English) after a “sacred text” they provide which is really just an old Penthouse.  The names?  Miss April (Antonia Dorian), Miss May (Griffin Drew), and Miss June (Michelle Bauer).  It’s only about 30 seconds into the first sex scene when Miss May asks Wayne to show her how to do “the thing on page 34 of the sacred text.”  Apparently this is just “woman on top, in a hot tub”.  At climax, Wayne yells “Page 34!  Page 34!!” 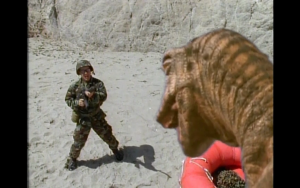 Lest one thinks the movie is all jokes and sex, there are several subplots as well.  Despite the major conflict being the eventual battle with “The Great One”, Queen Morganna (Toni Naples) and Captain Briggs also collude to speed along the younger soldiers’ quest as neither elder statesperson of their gender wants this mishmash of cultures to go on much longer.  Nothing much comes of these characters who seem to change their stripes on a dime.  Additionally, food is scarce due to giant insects that eat whatever crops the women try to farm.  Wayne’s solution is to make some pesticide from scratch.  These insignificant sidetracks are mostly unnecessary, but keep the story moving along where most films of this ilk would be happy to let a frivolous second act lead to titillation alone.

Eventually the heroes have to use their ingenuity to fight “The Great One”, which really just amounts to luring it out so they can shoot it with guns.  Fun fact: Apparently the prop they used for “The Great One” was also used as the T-Rex in delightfully oddball horror film, Carnosaur.  The special effects are beyond amateurish, but there is something fun in the combination of stop-motion, puppetry, and full-size props.  When they climactically defeat the big bad by throwing a grenade in his mouth and blowing off his head, one can’t help but feel satisfied.  Despite this, the seams that go along with thoughtless filmmaking still show.  At one point a group of sexy natives chase off a giant dinosaur by threatening it with spears.  Apparently the prop department was short a spear, because one of the girls is just kind of shaking her fist at the beast. 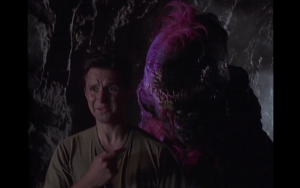 There were actually a couple good jokes.  Even the gags that didn’t quite work were at least somewhat amusing.  My favorite had to be right after the soldiers first land on the island and Turbo sees a scantily clad woman in a cave.  He becomes stupefied by her beauty, so she runs away and he’s tasked with explaining what he saw to his comrades.  The stuttering fool manages to spit out, “She had…” as he cups his hands at his chest in order to mimic the shape of breasts.  Skeemer, trying to interpret, guesses “Hands?”  To which Turbo replies, “No, not hands!”  Then Skeemer says, “She didn’t have hands?  Gross.”  The comedic timing of the scene doesn’t quite translate to print, but I laughed.  This came early on too, so you can’t even blame it on the wine.

That being said, there are a few offensive jokes that don’t really fly with today’s more delicate sensibilities (calling a handless woman “gross” isn’t really the most sensitive joke either).  A few transphobic comments stick out like sore thumbs in what is otherwise a surprisingly funny, if still fairly misogynistic film. 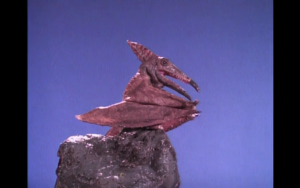 That being said… not all the jokes land.  In fact, most of them hit the ground like a sack of dead kittens.  The movie never takes itself seriously, but that doesn’t make the misses any less embarrassing.  After discovering a massive dinosaur egg, Skeemer and April find some refuge.  He asks her whether she even knows where dinosaur eggs come from, but she thinks a stork-like pteradactyl brings them.  So Skeemer replies, “Let me show you,” and takes off her top.  “But these are not eggs,” she says, puzzlingly gesturing towards her breasts.  To which Skeemer retorts, “Over easy or scrambled, they look like breakfast to me!”  Ew, dude!  That’s really creepy.  I had to check the cast list to make sure his name wasn’t actually Skeever.

The actors may be in on the joke, but that doesn’t change the fact that their line readings are notably stilted and unnatural.  This may not be an actual pornographic film, but the performances certainly suggest as much.  While the several of the elements may play pretty terribly, they still add up to a somewhat self-aware and uncomfortably enjoyable whole.