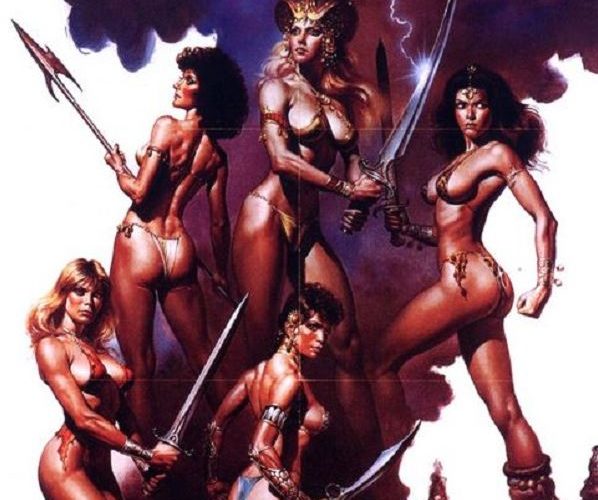 NETFLIXING UNDER THE INFLUENCE: ‘BARBARIAN QUEEN’ (NO MORE LOVE ON THE RUN)

This is another movie that isn’t available through Netflix’s DVD-By-Mail service and was just about to expire on their Streaming service.  If I didn’t watch it now, it would be lost to the ether!  Obviously I had to see it.  Check out the trailer below:

Ha!  Just kidding.  That clearly wasn’t the trailer.  I just wanted you to have the same song stuck in your head while reading this as I did while watching the movie.  Aren’t I hilarious?

I started Barbarian Queen all by my lonesome on a hungover Sunday.  I finished it a couple hours later on the same slightly tipsy, post-Brunch Sunday.

I think I need to stop watching so many movies that prominently feature rape or attempted rape for these write-ups.  It’s bad for the soul.   It’s not even like I am getting surprised either.  We all know what we’re going to get in a low-budget swords and sandals flick from the 80’s.

Lana Clarkson (Kaira in Barbarian Queen‘s spiritual successor, Deathstalker), plays the eponymous Queen Amethea, whose village is attacked by the Romans as she prepares for her upcoming nuptials to King Argan (Frank Zagarino).  The Romans brutally rape, murder, or enslave nearly every villageperson with the exception of the noble Amethea, the timid Estrild (Katt Shea), and the zealous Tiniara (Susana Traverso).  The three women team up and decide to track the Roman soldiers so they can get revenge and rescue their brethren.  Meanwhile, with the captured slaves, King Argan is forced into lethal gladiatorial matches and Amethea’s sister Taramis (Dawn Dunlap) is slated to become the unwilling consort of main bad guy, Arrakur (Armando Capo).

Things don’t go as planned when the heroines arrive at the Roman stronghold.  Tiniara is killed almost immediately, Estrild is brutalized right before the movie completely forgets about her, and Amethea is kidnapped and tortured with a ludicrously complicated device consisting of a sharp metal glove that pokes her breast whenever she struggles.  The queen is also eventually raped, but is able to escape through the power of Kegels (*shudders*).  Fortunately castle security is unbelievably lax, so most of the third act consists of slaves and escapees alike just roaming around until Amethea encounters a group of underground rebels who are also looking to bring down Roman control of the city. 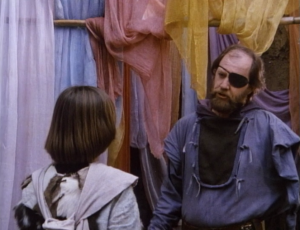 After our heroes gain the trust of the rebel leader (who you can tell is grizzled via his eyepatch and the fact that the actor clearly pulls his arm inside his sleeve to look like an amputee), they are able to collaborate on an attack and deliver a crushing defeat to the Romans.  I can’t stress enough that Estrild is more or less around for these scenes, but relegated to the background and does nothing important at all.  When they introduce her as being more squeamish about violence than the other barbarian heroines, it’s assumed that the increasingly traumatic encounters with villains will force her to confront her fears and learn to fight for her own life and freedom… I think it’s called “a character arc” or something.  However, it feels as if some of her scenes must have been cut since the role seems to peter out after they arrive at the Roman’s base of operations.  Apparently producer Roger Corman insisted that the film come in at a lean 72-minutes.

The Renaissance Faire-quality action during the climax is pretty stiff and never quite reaches the (not quite dizzying) heights of the inciting skirmishes with the Romans.  However, there are a few standout scenes sprinkled throughout the movie which are competently staged with a true sense of excitement.  One long shot of Amethea’s silhouette shooting a man in the face with an arrow is almost downright pretty!

Besides some of the quick fight scenes mentioned above, the movie is filmed rather plainly.  The locations seem hastily scouted/put together (were those tropical plants in the “barbarian” village that gets attacked?) and even the costumes seem inconsistently designed, ranging from “caveman” to “Middle Ages”.  In fact, nothing about the Xena-esque movie is really all that cinematic.  It is likely that medium/close talking heads shots were a cost-effective way to move the story along without focusing too much on the details of the period setting.  The end result, however, is just an ultimately flat action/adventure. 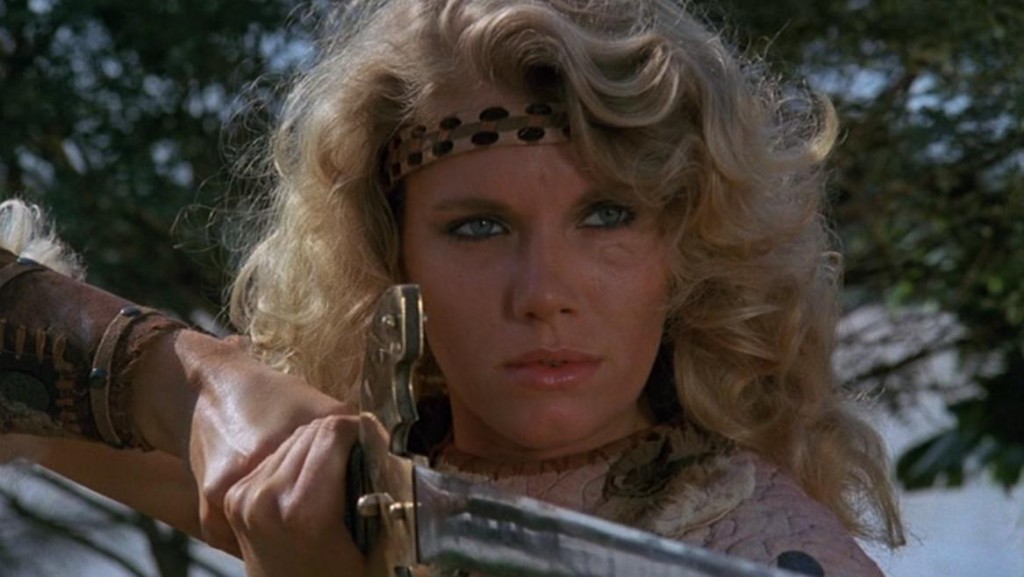 It would sully the reputation of the genre to point out a “highlight” of Barbarian Queen without talking about the eye candy actresses who were cast in the three leads.  Lana Clarkson is a commanding force whose imposing sexuality is contrasted by her soft facial features.  Meanwhile, Katt Shea and Susana Traverso physically match their characters’ respective core traits (power and guilelessness) and aren’t too bad to look at either.

The similarly powerful, yet innocent-looking Frank Zagarino is a formidable physical presence believably relegated to the “damsel in distress” role.  Howard R. Cohen’s script (also the man behind Deathstalker) actually does an admirable job of fleshing out the Frazetta pin-ups come to life.  Meanwhile, one (possibly unintended) result of Héctor Olivera’s flat direction is the notable lack of pervy lingering over the stars’ bodies.  The movie’s purpose may be sex appeal, but it doesn’t necessarily play out that way. 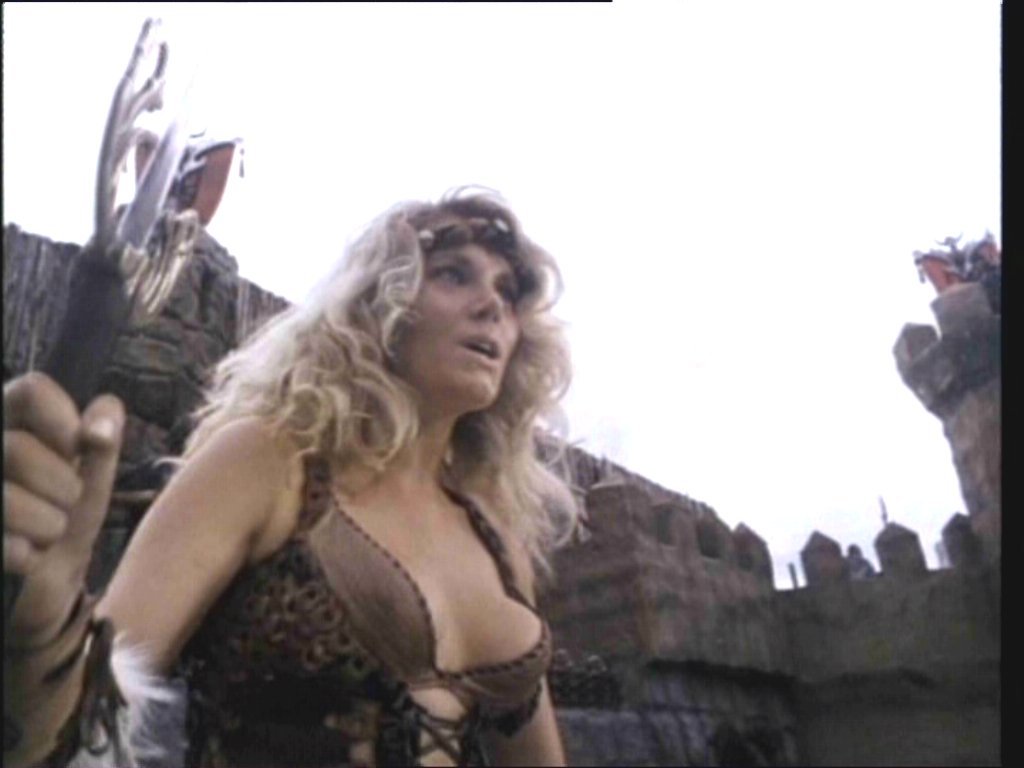 Unsurprisingly, Barbarian Queen is terribly acted.  The multi-character revenge plot should really be overbrimming with emotion, but is instead filled with dull and disinterested performances.  A lot of the inept actors can be dismissed by the amateurish dubbing that was done for this Argentinian co-production.
There is even one Varys-like slave driver who barely moves his mouth when he talks, but the high-pitched excitement of his voice sounds like Snagglepuss on a meth bender.

And the straightforward English-speaking performances aren’t much better.  When Zagarino is forced to train for the gladiator games he is told his new reason for life is to make his master happy.  The music swells magnificently as he marks his defiance through a low-pitched, monotone “He doesn’t own my soul yet.”  There is no emphasis on the words “soul” or “doesn’t”, nor is there any hint of emphatic rebellion in his voice.  Just the rising sound of triumphant strings and someone absentmindedly reciting some dialogue.  Seriously, the line reading has to be seen to be believed:

On the other end of the spectrum, Katt Shea (who later went on to direct sleazy thrillers Stripped to Kill and Poison Ivy) gives a wonderfully anachronistic performance.  While at least most of the actors give a general attempt at faux-period, overenunciated Old English readings, she sounds like she’s transported from the set of Desperately Seeking Susan as she casually spits out archaic and overwrought dialogue.

It was actually better than Deathstalker, which isn’t really saying much.  The story is simple and to the point while still providing a few surprises, which is almost remarkable for this style of b-movie.  The prominent titillation and barely serviceable action isn’t a complete waste of time, but it’s mostly a waste of time.

That being said… after Barbarian Queen, Deathstalker, and that painful Hercules retrospective, I think I’m going to steer clear of movies that primarily highlight scantily clad people running through the forest.  Especially ones as rape-filled as this. 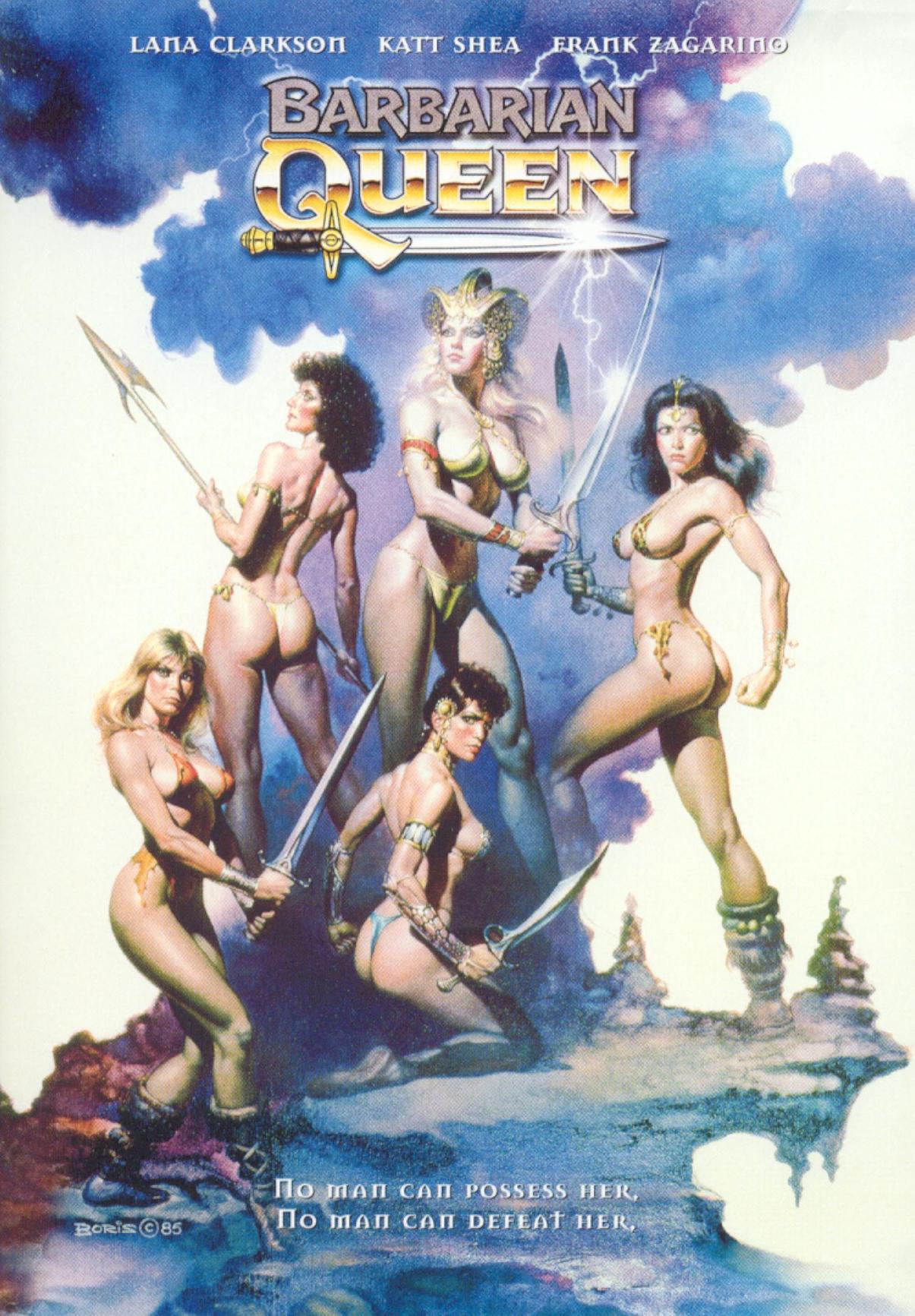