Why Did I Watch Q: THE WINGED SERPENT: ?uestlove’s Faux Waddle

When working on my choices for Schlocktoberfest, I looked first and foremost for movies that wouldn’t feel out of of place in the action/adventure section of a video store (they still have those, right?) but still incorporated horror elements.  So while Exorcist II: The Heretic, The Corpse Grinders, and Plan 9 from Outer Space may be pretty wretched, I preferred to look at stuff that was more intent on providing thrills than scares (whether they succeeded or not is another story).  Creature features seemed to be one of the most obvious places to look.

For awhile I had heard good things about Q (aka, Q: The Winged Serpent which is a title that takes way longer to type so I will no longer be using it).  That’s the great thing about the Internet.  If you’re a voracious movie watcher like us at AAG, you don’t even need a trusted advisor for your movie watching.  Just see it on some list at some website (like this one!) and pop it on your Netflix Queue.  We truly live in a brave new world.

More to the point, Larry Cohen wrote and directed this and I was familiar with him from the It’s Alive trilogy and The Stuff as well as a bunch of other b-movies that he endows with a satirical and schlocky attitude all his own.  Mix in performances by Kwai Chang Cain & John Shaft and you got yourself a slam dunk.

Note: There is a more typical trailer on YouTube, but since the full movie’s posted at the bottom of the page the cheesy teaser above definitely gets the job done. 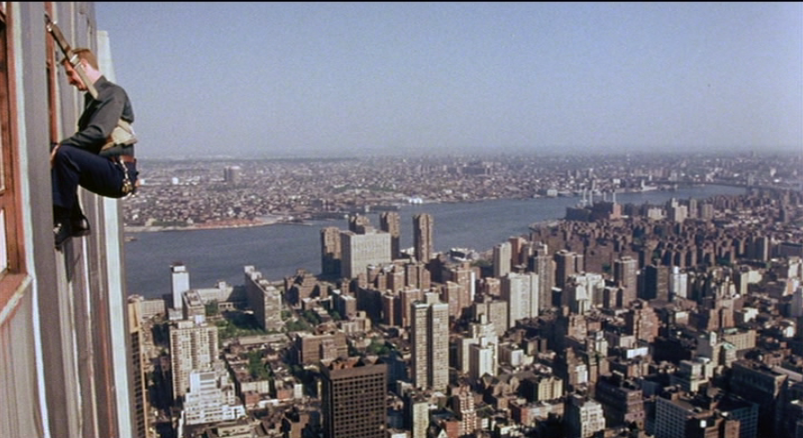 I can say with some certainty that, unlike Johnny Mnemonic, Q provides a number of decapitations which fulfills any perceived promise the filmmakers may have made in the synopsis.  I heard it was about a giant dragon-like being who chomped off people’s heads and that is, in fact, what the movie is about.  To sell this point, the short opening credits transition directly into a slightly pervy, highrise window washer getting his head bitten off by a stop-motion flying beast.  A few other scattered incidents occur (all at the top half of New York City’s Midtown skyline), but are interestingly interspersed with the story of a hapless buffoon named Jimmy Quinn (Michael Moriarty), who gets involved with a jewel heist as a getaway driver.  The b-plot consists of Detective Shepard and Sergeant Powell (played, respectively, by iconic actors David Carradine and Richard Roundtree) investigating a rash of brutal dismemberings reminiscent of ancient Aztec ceremonies.  Victims have been mysteriously skinned and had their hearts removed in order to appease some ancient force.

When things inevitably go wrong with the heist, Jimmy loses the jewels while running from law enforcement and attempts to contact his lawyer situated on what seems to be the 77th floor of the Chrysler Building.  After somehow setting off an alarm he makes his way up the skyscraper tower in a frenzy of paranoia, where he discovers the the title monster’s egg which is roughly the size of a SmartCar.  Around the time Quinn is finally arrested for the jewel job, Carradine starts to connect some sightings of a giant, serpent-like bird to the decapitations as well as the fact that the ritualistic killings are reminiscent of ancient sacrifices to barely phoenetical Aztec deity, Quetzacoatl (which is intensely fun to say aloud). 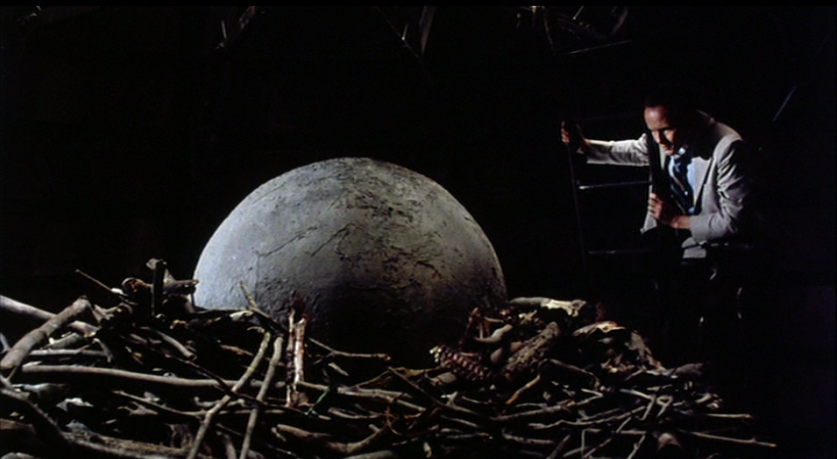 What seems to be a paint-by-numbers monster movie takes a wild right-hand turn at this point.  Instead of Shepard and Powell solving the crime, it’s up to Quinn to give the city information regarding the location and details of the expectant mother’s nest.  Being the type of upstanding citizen who robs storefronts in the Diamond District, he ends up extorting the city for full criminal immunity for life, a million dollars, and full rights to all photographs and remains of the flying beast: “Quit, sir. You oughta”.  A good portion of Q is a character study of the unhinged Quinn trying to make the most of his pathetic station in life.  The audience becomes much more invested in watching an unstable ex-con try and cheat the system than they do seeing what happens with the supernatural being with the insatiable appetite.

With his wishes fulfilled, Quinn leads the NYPD up to the the nest where they proceed to destroy both the egg and the rampaging beast-god.  In a short but feverish climax, Larry Cohen reverses the famous scene from King Kong as “Keith Sweat’s Cold Apple” battles the heavily armed police force perched within the Chrysler spire.  When the city eventually reneges on their deal, Quinn accepts that he isn’t cut out for a life of crime and blackmail.  In the life-or-death situation brought on by the movie, he learns he’s going to have to confront his fears in order to stop getting shit on by all the authority figures in his life (as he puts it “I’m almost afraid of everything, but I’ve never been afraid of heights”).  So he walks away from Shepard assuring him that he’s going to try get a job playing the piano somewhere. 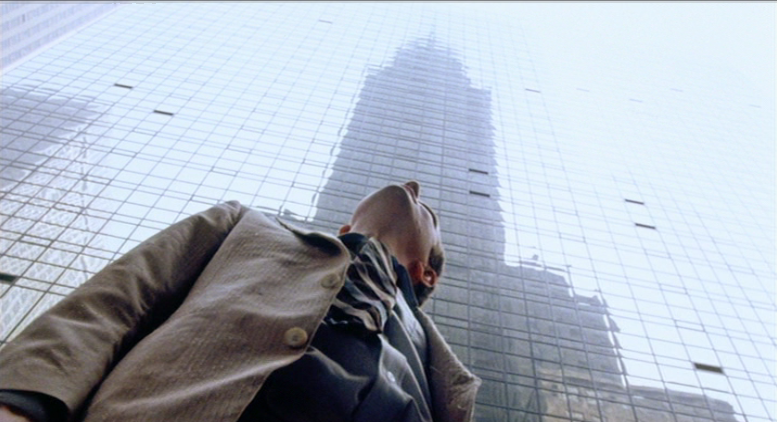 Cohen makes great use of helicopter-eye views of Manhattan as he suspensefully sets up the creature’s kills.  Even without the unique sense of geography, Q truly pulls off being about New York City.  From expository scenes at the Natural History Museum to one of the best moments (although ultimately inconsequential) in an empty dive bar, the movie effortlessly juxtaposes the many facets of the city.  The good cops, bad cops, career criminals, big shot lawyers with rooftop pools, wiseass construction workers, and exhausted politicians all serve to paint a thorough picture of a no nonsense city dealing with a horror of mythical proportions. 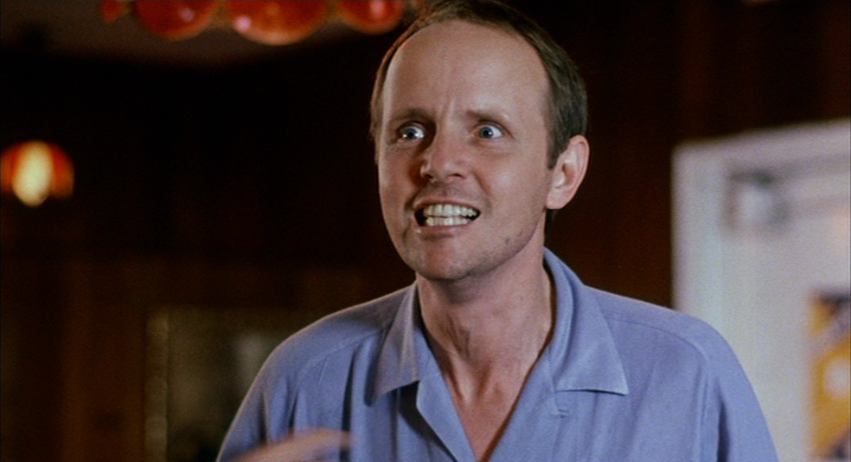 Michael Moriarty is the highlight of Q, without a doubt.  His demented performance is tonally in-line with the unique, nearly subversive plot.  Despite his indifference at the death of others as he haggles with the mayor’s office or the admission of some domestic abuse charges, the portrayal is at once both preposterous and sympathetic.  As sleazy as the character is, an impassioned speech about how the city owes him for a bum rap after a police officer planted drugs on him provides a strong dose of Cohen’s typical political satire.  He goes on intense rants about Rupert Murdoch, jazz piano, and the IRS whenever the film gives Moriarty a chance to completely let go (which is often).

One of my favorite scenes occurs when he first gets to the Chrysler Building and in a case of “when you gotta go, you gotta go” he unzips and gets ready to urinate right there in the dome of the landmark. 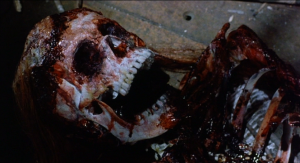 Cue the jump scare when the bloody remains of one of “Quite sick = A Lot Ill”‘s victims falls directly on him.  The camera cuts to him shivering in the fetal position from the scare, when he eventually looks down and notices he hasn’t put everything back in his pants yet.  Moriarty frantically adjusts.  It’s a stupid gag, but one of many relatable moments in an unbelievable story.  Another standout hilarious moment is when he throws some loose change at Carradine’s character and screams: “Stick it up your… uh… brain!  Your small little brain!”

I have an ongoing list of my top b-movie performances of all time, and I know for a fact that Moriarty as Jimmy Quinn is in my Top 5.  That will show up on Action A Go Go soon enough, I’m just trying to be thorough.

There truly aren’t too many negative things to say about this one.  The aspirations of Q are clear and the low-budget film succeeds on nearly all fronts.  If forced to come up with a gripe, I would say that it could have featured the monster more.  Sporadically there are some great scenes, and the climax at the top of the Chrysler Building is wonderfully action-packed and zany.  However, when the movie goes off on tangents that don’t feature “Quvenzhané Wallis” or Quinn (like all the Aztec sacrifice stuff) it starts to drag just the tiniest bit. 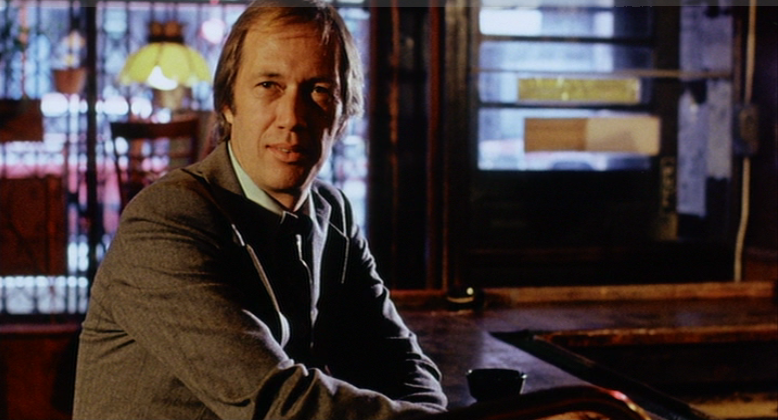 Richard Roundtree is given a meaty enough part, but as Carradine goes off to hunt a giant, winged lizard and Roundtree goes to a museum to check out on a human sacrifice, one can’t help but think that the latter storyline is no more than filler in the 92-minute long movie. The strong points are created with such care, however, that it’s hard to fault Cohen too much for the small aspects of the film that don’t stick.

Yes!  Watch it now! Moriarty is truly a genius in Q and deserves all the strange praise he gets.  On this second viewing there were quite a few moments that reminded me of one of my favorite current comedians, Bill Burr.  That simply added another layer of subjective appreciation for the craft of the performance.  Also, the claymation monster may not be on the level of Ray Harryhausen’s stop-motion character-building, but I always give up respect for anything that even slightly channels the master himself.

In addition to the movie, check out the wonderful oral history from The Dissolve.

The full movie is below, but first make sure you check out the rest of 2014’s Schlocktoberfest!

Schlocktoberfest Part 1: KISS Meets the Phantom of the Park

Schlocktoberfest Part 2: You just read it!

All images courtesy of UFDC